The Creche and the Constitution: May Municipalities Sponsor Nativity Scenes?

The Creche and the Constitution: May Municipalities Sponsor Nativity Scenes?

The ACLU and other such organizations are beginning to establish a new holiday tradition: suing local governments to prohibit their sponsorship of Christmas creche displays in public buildings and parks. Several cities have again been sued this season. San Diego, for example, is presently in federal court defending its annual Christmas display in a public park of eight sets of life-size figures depicting the birth and life of Jesus. An organization calling itself the Society of Separationists challenged San Diego’s allowance of this display, arguing the governmental involvement in such an “intensely religious exhibit” is unconstitutional, even though the display was erected and maintained by a citizen’s committee.

The constitutional issue raised here concerns the First Amendment’s prohibition of any governmental body from passing a law or engaging in conduct “respecting an establishment of religion, or prohibiting the free exercise thereof….” The Supreme Court has interpreted the Establishment Clause to mean that, in order to pass constitutional muster, the challenged governmental conduct must pass three tests: (1) it must have a secular purpose; (2) its principal or primary effect must be one that neither advances nor inhibits religion; (3) it must not foster excessive government entanglement with religion.

The Supreme Court has decided two government sponsored creche cases in recent years. Both cases, however, resulted in a bitter division of opinion among the justices and seemingly contradictory results. In 1985, the Court considered a challenged Christmas, creche display sponsored by the city of Pawtucket, Rhode Island, placed in a private park in the downtown shopping district. In addition to the creche, the city’s display included: a Santa Claus with a live Santa distributing candy; reindeer; a 40-foot decorated Christmas tree; statues of carolers in traditional dress; a “talking” wishing well; candy-striped poles; and various “cut-out” figures including a clown, a dancing elephant, a robot, and a teddy bear.

The Court held that Pawtucket did not run afoul of the Establishment Clause by endorsing religion through its display of the creche. The Court ruled that because (1) the creche is “a traditional symbol” of Christmas, a holiday with strong secular elements, and (2) because the creche’s secular setting “negates any message of endorsement” of “the Christian beliefs represented by the creche.” A vigorous dissent voiced the opposite opinion that secular elements of the Pawtucket display did not negate the implied endorsement of the Christian religion.

Then last year the Court confronted another challenged Christmas creche display and came to the opposite conclusion. For numerous years each Christmas season, the Holy Name Society, a Roman Catholic group, was permitted to display a creche in downtown Pittsburgh, PA. The creche, like other creches, included a visual representation of the scene in the manger in Bethlehem, including figures of the infant Jesus, Mary Joseph, farm animals, shepherds, etc. An angel held a banner proclaiming “Gloria in Excelsis Deo.” This creche was displayed by itself on the Grand Staircase in the center of the Allegheny County Courthouse.

In a close decision (5-4, the Court held the Pittsburgh creche display, unlike the one in Pawtucket, violated the Establishment Clause because (1) the angel’s words endorse a patently Christian message, and (2) unlike the Pawtucket case, nothing in the creche’s setting detracted from that message. Although the government may “acknowledge” Christmas as a cultural phenomenon, said the Court, it may not observe it as a Christian holy day by suggesting that the people praise God for the birth of Jesus.

The minority filed a bitter dissent suggesting that the Pittsburgh creche was essentially no different from the Pawtucket one which had passed constitutional scrutiny. They accused the majority of “latent hostility” toward religion, suggesting that the majority’s interpretation of the Establishment Clause would “require a relentless extirpation of all contact between government and religion.” Rather, the dissent suggested, the creche is permissible because “government policies of accommodation, acknowledgement, and support for religion are part of our political and cultural heritage.” The dissent further argued that since in this instance the government is not using the creche to “proselytize” or “coerce” anyone or to further Christianity, such “passive and symbolic accommodation” presents no realistic risk of the establishment of any religions.

Because of the 5-4 split and the noticeable disparity of opinions expressed in these recent cases, it has become clear that the federal courts are still desperately struggling to find a workable standard to distinguish permissible government accommodation vis a vis unacceptable governmental endorsement of any religion. Apparently the only difference between the acceptable Pawtucket creche and the unlawful Pittsburgh creche was the setting: the Pawtucket display was placed in close proximity to reindeer, a Santa Claus, “talking” wishing wells, and other secular exhibits, which supposedly “detracted” from its religious significance. This result led dissenting Justice Kennedy to remark wryly that majority’s jurisprudence has been reduced to “little more than intuition and a tape measure.”

Although Establishment Clause issues never admit of easy answers, the Supreme Court’s ostensibly subjective and intuitive wanderings in this area of constitutional jurisprudence is somewhat disturbing. But even more troubling is some of the dissenting Justices’ reasoning forallowing government involvement in and sponsorship of the Christmas creche displays.

For example, Justice Kennedy’s opinions permitting government sponsorship of such religious displays suggest that the creche is a “traditional symbol that over time has acquired a secular component.” Other Justices quoted authorities who claim that the “cultural aspect of Christmas in this country now exceeds the theological significance” and that “the folk-secular aspects of Christmas are taking precedence over religious ones.” In other words, the implication is that government sponsored Christmas creche displays are constitutionally permissible because Christmas has now become a predominantly secular holiday. The manger and Christ child are now indistinguishable from Santa, his reindeer, and “talking” wishing wells.

The Justices favoring these creche displays cite as a precedent the Supreme Court’s approval of legislative prayer in the 1982 decision of Marsh v. Chambers. In that case the Court addressed an Establishment Clause challenge to the Nebraska state legislature’s practice of opening each session with prayer led by a paid Presbyterian chaplain. Noting that the chaplain had removed all reference to Christ in his prayers after an earlier complaint from a Jewish legislator, the Court held that such generic prayers at governmental functions serve the legitimate secular purpose of solemnizing public occasions, expressing confidence in the future, and encouraging what is worthy of appreciation in society.”

It has been suggested that this view of legislative prayer is “ceremonial deism,” and indeed it is. One might even argue that this secularized view of prayer (and the creche) is tantamount to blasphemy.

In conclusion, even though the Reformed Christian would reject both private and public displays of the creche as a violation of the Second Commandment, it is indeed disconcerting to learn that our Supreme Court is willing to “accommodate” public prayer and Christmas creches only because they have lost their religious significance and serve only to “solemnize” public occasions and contribute to the seasonal celebration of what is now a “predominantly secular” holiday If the Supreme Court is willing to accommodate prayer and Christmas for these reasons, then perhaps Christians have won a Pyrrhic victory.

Accordingly we ought to be very wary of the view of many evangelicals and Catholics who suggest that because this is a “Christian” nation, generic prayers at governmental functions or in public schools and public crèche displays sponsored by local government should be favored. The inevitable result of such state involvement is always the trivialization and degradation of true religion. It is one thing to argue that the government should accommodate religious practices; it is quite different to suggest that government itself should sponsor these religious activities. If the practical outcome of such “accommodation” is a national ceremonial or secular deism, maybe what this country needs is a little dose of “latent hostility.” Surely it is not the government’s fault that our national motto (“In God We Trust”), Christmas, and public prayer have become meaningless; but if they have, then Christians should not insist that our government continue such pernicious practices. 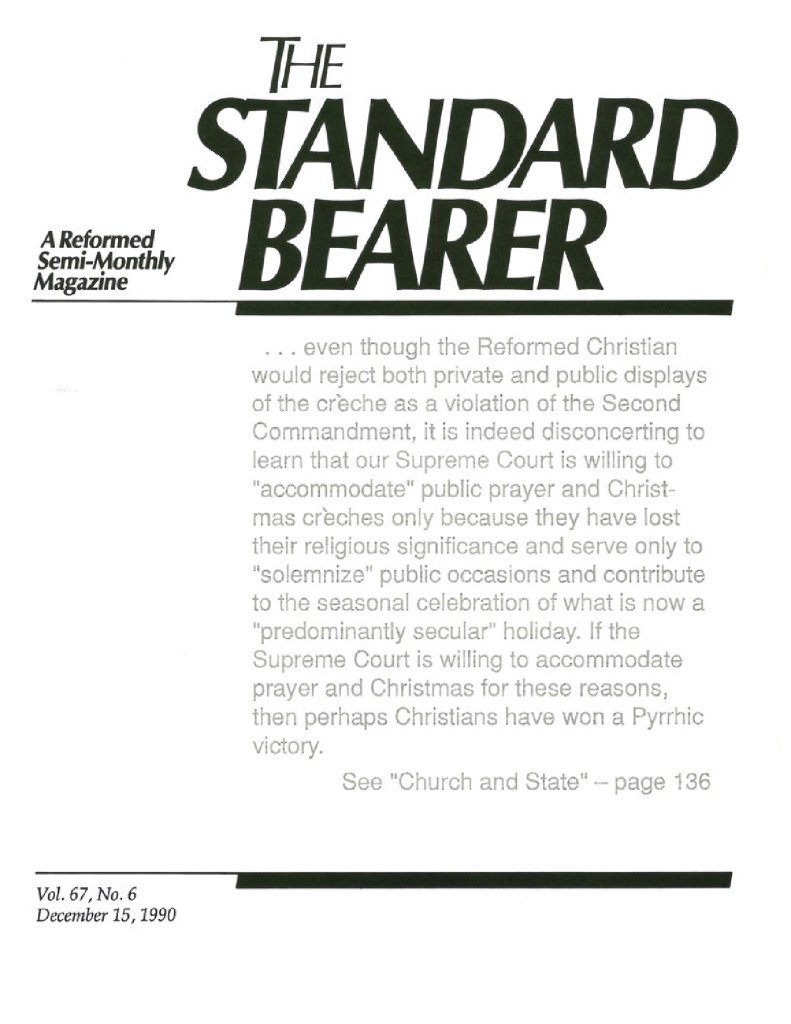