The Creation of the Heavens and the Earth (2): God Created by His Word: A Truth Understood Only by Faith

The Creation of the Heavens and the Earth (2): God Created by His Word: A Truth Understood Only by Faith

An unbeliever who has never read the Scriptures or heard them preached can look out at the creation and see that there must be a God. The eternal power and divinity of the Creator are understood by the things that God made (Rom. 1:20). But it takes faith to understand that God created all things simply by uttering the word of His power. A person must have faith to understand this. There is no other way.

This is what God’s Spirit tells us in the eleventh chapter of Hebrews: “Through faith we understand that the worlds were framed by the word of God, so that things which are seen were not made of things which do appear” (Heb. 11:3).

A scientist studying the creation under a microscope cannot detect that it was simply by His word that God brought the creation into existence. We can and do understand this truth only by believing what God Himself has told us in Scripture.

Creation by the Word of God

Although many today speak of people “creating” different things, the word in Scripture translated “create” refers to an activity that only God performs. That God creates means that He “calleth those things which be not as though they were” (Rom. 4:17). To call something into existence—that is what it means to create. This is the work of the Almighty God alone. He speaks, and that which before was not suddenly comes to be.

This creative work of God is something that He performed by His word. We read that on the first day God spoke the words, “Let there be light,” and light came to be. There are other days on which God created something in such a way that one creature was brought forth from another: “And God said, Let the earth bring forth grass” (Gen. 1:11a). “And God said, Let the earth bring forth the living creature…” (Gen. 1:24a). But one thing that was consistent in every creative act was this—it was by God’s word that each creature was called into existence.

Only God’s creative word could have brought forth living plants out of lifeless soil. The statement “Let the earth bring forth the grass” serves to indicate that the grass is indeed related to the earth, and that its material makeup is derived from the earth. But no human being could have taken a pile of pure soil and brought forth a plant out of it. Only the omnipotent God, by the power of His word, could have performed such an astounding work.

That God created by His word is not something that can be understood by the creation all by itself. It is only from the Scriptures that we know that this is how it happened. God has told us, and that is how we know.

That means this truth can be understood only by means of faith—a faith that holds for truth all that God has revealed to us in His word. Even an unbeliever knows there is a God and that He must be served, but only a believer can and truly does understand that the Creator called all the creatures into existence simply by speaking His word. God expressed His will, and what He willed took place.

This glorious work of creation man did not see. Man was created last, and did not see God call any of His creatures into existence. Even when God built the woman out of the man, the man was in a deep sleep. So to believe creation is to believe something we have never seen.

Yet that is precisely what faith does. A child of God believes and has no doubt about things he has never seen. His Father has told him it is true, and that is enough for him. If his Father in heaven has said it, then the child of God has absolutely no doubt that it must be so. Such is the nature of genuine, God-given faith. 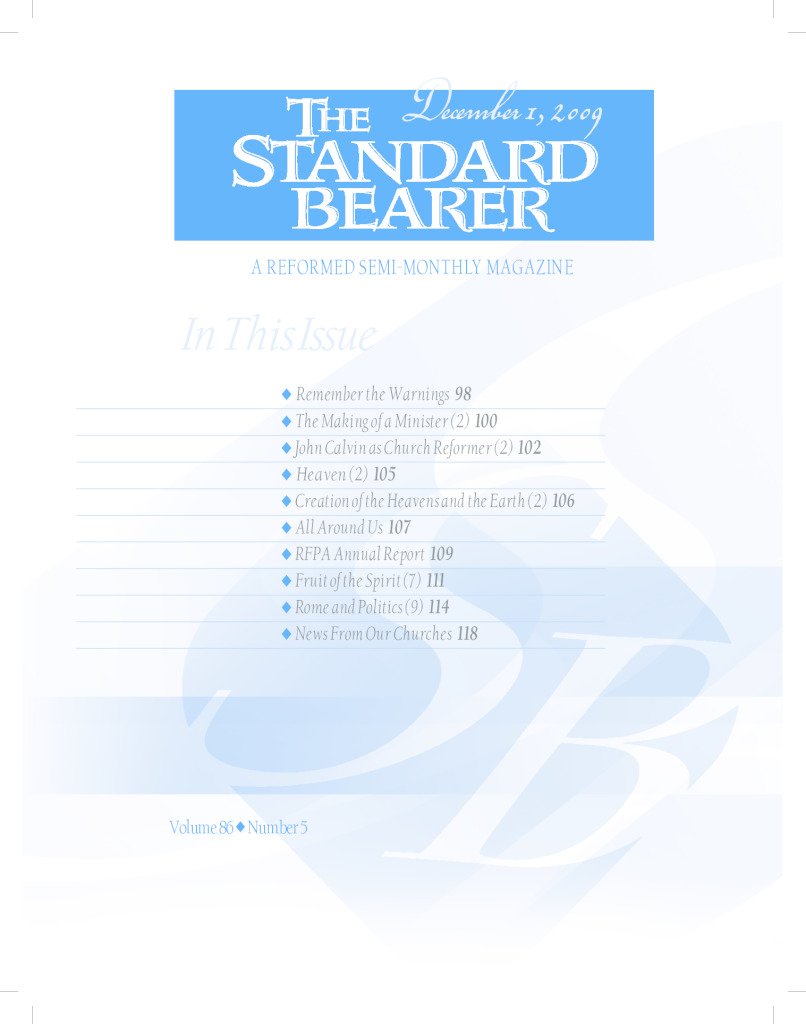