Prof. Engelsma is professor of Dogmatics and Old Testament in the Protestant Reformed Seminary.

Nowhere has the doctrine of the covenant figured as prominently, or been so thoroughly developed, from the sixteenth century Reformation of the church to the present, as in the Dutch Reformed tradition.

For this the Christian church owes the Dutch Reformed tradition a huge debt of gratitude, inasmuch as the truth of the covenant is central to the Christian faith and life.

At this time, the very beginning of the Dutch Reformed tradition, the Spirit of truth led the Reformed church in the Netherlands to decide that election governs the covenant.

What this means is that God’s covenant grace is not wider than the eternal decree in Christ ordaining certain humans unto salvation, in distinction from others appointed to damnation. In arriving at this official decision, the Reformed church in the Netherlands simply applied the fundamental truth of the Reformation, namely, that salvation is by sovereign grace alone, to the reality of the covenant.

Two considerations seem to belie the assertion that the Reformed church in the Netherlands decided the doctrine of the covenant early and that it confessed the covenant to be governed by election. The first consideration is that the earliest Dutch Reformed theologians, for example Gomarus, and the “Three Forms of Unity” lacked a developed doctrine of the covenant. In fact, the covenant did not have a prominent place in the theology of the earliest Dutch Reformed theologians or in the “Three Forms of Unity.”

E. Smilde, in his Een Eeuw van Strijd om Verbond en Doop [Eng. tr.: A Century of Struggle over Covenant and Baptism] (Kok, 1946), and C. Veenhof, inPrediking en Uitverkiezing [Eng. tr.: Preaching and Election] (Kok, 1959), have demonstrated that this controversy over the relation of the covenant and election continued in the Netherlands in the nineteenth century. This was the very same controversy that split the Reformed Churches in the Netherlands (GKN) in the 1940s and the Protestant Reformed Churches in America in the early 1950s.

Controversy over the Covenant


If there was little development of, and indeed little emphasis on, the covenant in the early Dutch theologians and in the creeds, and if the subsequent history of the dogma in the Netherlands has been a fierce controversy between those who affirmed and those who denied that election governs the covenant, how can it be said that the doctrine of the covenant was established early in the history of the Reformed church in the Netherlands as a bond of salvation governed by election?

It is true that there has been a long, often bitter, struggle in the churches of the Dutch Reformed tradition over the covenant, particularly over the relation of the covenant and election. It is also true that there have been notable defenders of the truth that election governs the covenant. Graafland recognizes that Gomarus, like Zanchius and Beza, thought it of central importance “that participation in the new covenant of grace has been ordained only for the elect.” The reprobate are merely in “the external covenant,” or in the covenant “externally.” For Gomarus, the covenant was so dominated by election that it was “a part of election” (Van Calvijn tot Comrie, vol. 3, pp. 77, 78).

Smilde and Veenhof demonstrated that VanVelzen, the best of the theologians of the Afscheiding[Secession] in the nineteenth century, taught the same doctrine of the covenant. VanVelzen maintained that the phrase “sanctified in Christ” in the Reformed baptism form refers only to the elect children of believing parents.

On the other hand, as Graafland makes plain, the line of those in the Netherlands who defended a doctrine of the covenant “liberated” from the “oppressive weight” of the eternal decree runs through the humanists Coornhert, Veluanus, Snecanus, and Wiggertsz, and the heretics Arminius, vanLimborch, and Amyraut (Van Calvijn tot Comrie, vol. 3, pp. 88-278). The foes of predestination have always advanced a doctrine of the covenant that extends the grace of God in Christ more widely than does the “Calvinistic” decree of election. Thus, these foes, whether subtly or overtly, use the covenant to destroy, and bury, election, and with election the gospel of sovereign grace.

The fundamental issue concerning the covenant, namely, that the covenant is governed by election, was established especially by two official, binding documents, the “Form for the Administration of Baptism” and the Canons of Dordt.


Recommended works on the subject of this article:

—D. Engelsma, The Covenant of God and the Children of Believers: Sovereign Grace in the Covenant (RFPA, 2005) 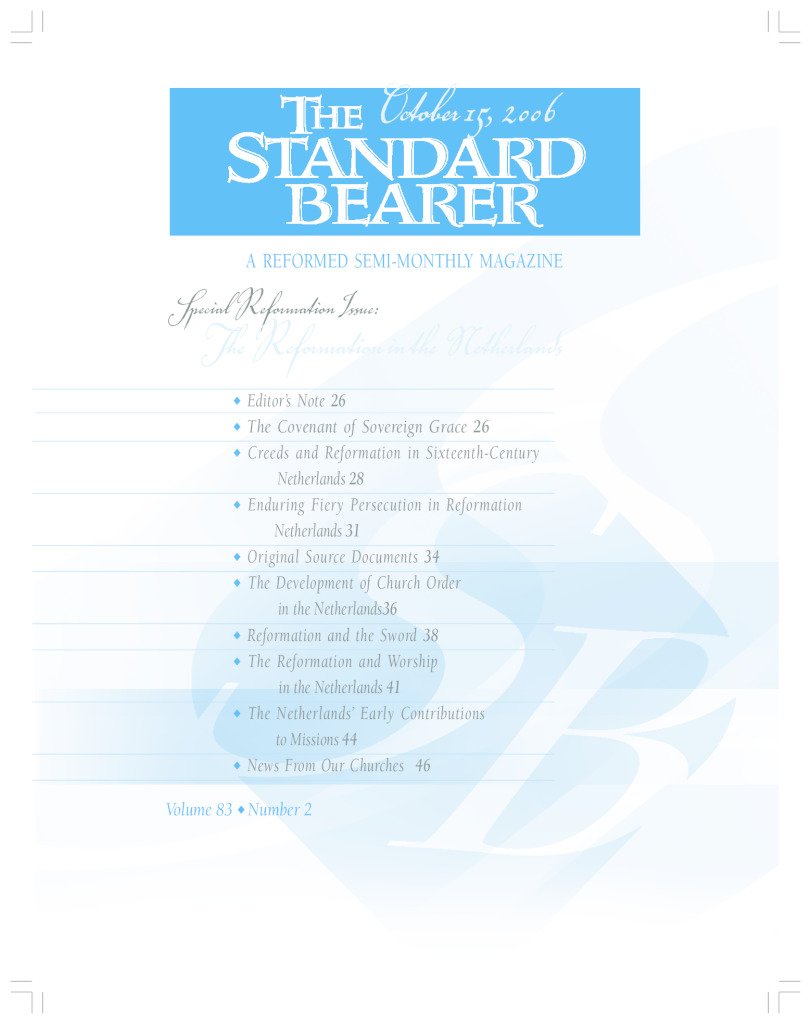