The Covenant Doctrine of the “Fathers of the Secession” (3)

The Covenant Doctrine of the “Fathers of the Secession” (3)

Prof. Engelsma is professor of Dogmatics and Old Testament in the Protestant Reformed Seminary. Previous article in this series: December 1, 2007, p. 102.

Controversy over the Covenant

Although the two ministers denied the charges, their covenant doctrine taught that covenant salvation is by works, covenant grace is resistible, and covenant saints can fall away from grace.

Implied was that the reason why some children are saved, abide in the covenant, and finally inherit eternal life is not the grace of the covenant, or the promise of God, but their own performance of the stipulated condition.

The covenant of grace and our covenant relation with God in Christ have their origin and their ground in this covenant of redemption between God and Christ. From this proceeds the beginning, continuance, and end of the salvation of men. Before one existed, before the gospel was preached to him, it was already decreed and arranged in this covenant when he would be born, when and by what means he would be delivered [from sin], how much grace, comfort, and holiness, how much and what kind of strife and cross he would have in this life—all of this was decreed and comes to each one from this covenant. The elect have then, on the one hand, to do nothing and let the Lord work…. By the power of this covenant, the Lord Jesus is the one who carries out the salvation of the elect.²

Here a matchless love reveals itself, which surpasses all understanding. In this covenant [of redemption in eternity], to be known and thought of; to be given by the Father to the Son; to be written by the Son in His book; to be an object of the eternal, mutual delight between the Father and Christ to save you—that is blessedness! that is a wonder! Here was no foreseen faith, no good works, by which the parties were moved to think of certain persons in this covenant. Here was no necessity, no constraint, but only eternal love and sovereignty. “Yea, I have loved thee with an everlasting love.”³

Baptism as a (Certain) Seal

In the same issue of the magazine, Van Velzen condemned Pieters and Kreulen—his colleagues in the ministry in the churches of the Secession—by name. Van Velzen used his editorial prerogative to give a running criticism of an article by K.J. Pieters on infant baptism and the covenant. In one of his long editorial comments, Van Velzen expanded the scope of his criticism to include the book that Pieters had written with J.R. Kreulen four years earlier, Infant Baptism. Because of their insistence that Baptism is a sign and seal of God’s grace and salvation for all the baptized children alike, Pieters and Kreulen were forced drastically to weaken the significance of Baptism. They had written that in the baptism of infants Christ merely testifies that all the children “can find in Me a rich righteousness, salvation, and honor in the way of faith.”

“Can find…in the way of faith?”! Merely this? The believer says more, much more. As certainly as our children have been washed with water, they have the forgiveness of sins, for to them is promised redemption from sins by the blood of Christ, no less than to the adults (Heid. Cat., Q. 74)…. Therefore they ought to receive the sign and the sacrament of that which Christ has done for them (Bel. Conf., Art. 34).4

Those who deny that election governs the covenant are forced to view the baptism of infants as an uncertain sign of what the Savior is willing to let the children do (“find in Me a rich righteousness,” etc.), rather than as the sure sign of what Christ has done and will do for the children, namely, shed His blood for them, forgive their sins, and sanctify them unto life eternal.

Turning his attention back to Pieters’ article inDe Bazuin, Van Velzen answered Pieters’ charge that those who maintain that the true covenant children are the elect children of believers strip the sacrament of its meaning in the case of the other children who are baptized. Without naming him, Pieters directed this charge against Van Velzen, editor of the magazine in which he made the charge. Pieters wrote: “Most administrations of Baptism happen to those who are no members of the covenant [by election, on the view of Van Velzen—DJE]. What then does Baptism signify and seal regarding them? Must not the answer to this question be, ‘Nothing, absolutely nothing’?”

What Baptism signifies and seals to those who are no members of the covenant? It is the same in this case as with the Lord’s Supper. “The ungodly indeed receives the Sacrament to his condemnation, but he doth not receive the truth of the Sacrament” (Bel. Conf., Art. 35).5

A “Common and Powerless Grace”

Striking to the very heart of the error of Pieters’ conditional covenant with all the baptized children alike, Van Velzen charged that Pieters’ covenant doctrine made the covenant promise of God false and ineffectual. In the words of the apostle in Romans 9:6, in Pieters’ doctrine “the word of God hath taken none effect.” For Pieters taught that God promises the forgiveness of sins and eternal life to all the baptized children without exception. Regardless of this promise, however, many of the children perish, unforgiven and damned.

If God gives them this promise, a promise that is not empty and useless, then He will not impute their sins to them, then they have forgiveness with Him, and they are partakers in “the strongest sense of the word” [Pieters had suggested understanding the grace promised to all the children in a strange, obscure, weak sense—DJE] of saving grace.6

Closely related to Van Velzen’s objection to the false and impotent promise of Pieters’ conditional covenant was Van Velzen’s condemnation of Pieters’ doctrine of covenant grace. Pieters taught that God is gracious to every child at Baptism. Because this covenant grace is conditional, it fails to save many of the children. Covenant grace can be lost. Covenant children can very really fall away from the grace of God in Jesus Christ once bestowed upon them. In what was a damning indictment of the new doctrine of the covenant in the churches of the Secession, Van Velzen condemned it as a doctrine of a “common and powerless grace.”7 The indictment was damning because the doctrine of common, resistible grace was the heart of the Arminian heresy condemned by the Canons of Dordt, official and beloved creed of the Christian Separated Reformed Church.

The “father of the Secession” saw clearly the implications of Pieters and Kreulen’s doctrine of a gracious, conditional covenant promise of salvation to all the children alike. At the conclusion of Pieters’ series on Baptism and the covenant in De Bazuin, Van Velzen summed up Pieters’ doctrine this way:

In Baptism, the forgiveness of sins is promised to the entire visible church, to all the members of the visible church without distinction, to children and adults, head for head. In the promise, the benefits of salvation are given to each and every one of them. But the promise of forgiveness and of the other benefits is not saving.

It is easy to perceive that this opinion must have great influence on the preaching and that by necessary logical consequence the idea of the covenant of redemption, election and reprobation, limited atonement, and such truths [the doctrines of grace as confessed in the Canons of Dordt—DJE] must undergo enormous change.8

The prophecy of the “father of the Secession” is fulfilled with a vengeance today in the theology and preaching of the federal [covenant] vision. The men of the federal vision openly teach justification by faith and works and the doctrine of universal, resistible, losable grace—in the covenant.

Their heresy is the necessary development of the doctrine of a conditional covenant.

The covenant doctrine of K.J. Pieters and J.R. Kreulen.

Emphatically, not the doctrine of the covenant of the “fathers of the Secession” of 1834.

¹ Simon Van Velzen, quoted in E. Smilde, Een Eeuw van Strijd over Verbond en Doop (Kampen: J.H. Kok, 1946), 45. This and all other quotations of Dutch writings in this article are my translations. 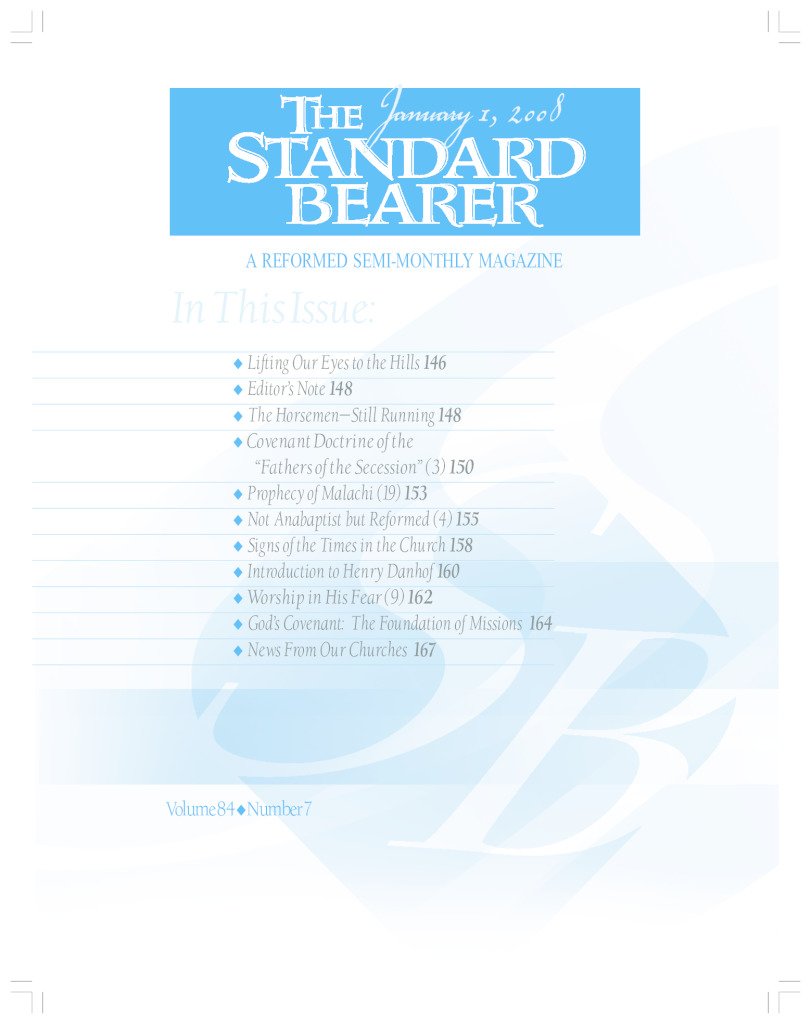