The covenant and Dordt (7): Head 2, The atonement

The covenant and Dordt (7): Head 2, The atonement

The doctrine of election governs all the doctrines of grace. If election is conditional, all of salvation be­comes dependent on man. If election is sovereign, free, and eternal, salvation is all of God. The Canons bold­ly and clearly set forth the truth of sovereign, double predestination. The doctrine of the covenant that is in full agreement with the Canons is the covenant doctrine governed by election. On the other hand, as has been demonstrated, the doctrine of a conditional covenant established with all the baptized children of believers conflicts with the Reformed theology of predestination taught in the Canons.

The second Head of the Canons is “Of the Death of Christ and the Redemption of Men Thereby.” Here the Canons expound another essential part of God’s saving work, namely, Christ’s atoning death on the cross. This truth is based squarely on the doctrine of election.

That relation between election and the death of Christ the Arminians recognized as well. After teach­ing (in their first point) an election conditioned on the sinner’s believing and persevering in obedience, the Re­monstrants started their second point,1 “That, agree­ably thereunto [emphasis added], Jesus Christ…died for all men and for every man….” Their second article ex­plains further, “that [Jesus] has obtained for them all, by His death on the cross, redemption and the forgive­ness of sins….” However, recognizing that all men are not saved from sin and do not inherit eternal life, the Remonstrants added, “yet no one actually enjoys this forgiveness of sins except the believer….” Thus, they add a condition also here, and again it is faith. The same condition they insisted was necessary to be elect is now required in order to have the benefits that Christ obtained in the cross. Further cementing election and the atonement, the opinions of the Remonstrants on that second article state that “this redemption of the whole human race…[is] according to the decrees, will, and grace of God the Father”2 [emphasis added].

The Canons reject this supposed redemption of all men, where only those who fill the condition of faith are actually saved.

Instead, the Canons teach the biblical doctrine of the cross by setting forth the three cardinal elements of the Reformed doctrine of the atonement: satisfaction, substitution, and particularity; and because of those, an atonement that is effectual.

Articles 1 and 2 teach that the death of Christ was a satisfaction. Article 1 insists that we, fallen in Adam, cannot escape “eternal punishment of body and soul…unless satisfaction be made to the justice of God.” Ar­ticle 2 follows:

Since, therefore, we are unable to make that satisfaction in our own persons, or to deliver ourselves from the wrath of God, He hath been pleased in His infinite mercy to give His only begotten Son for our surety, who was made sin, and became a curse for us and in our stead, that He might make satisfaction to divine justice on our behalf [emphasis added].

Christ’s death is a satisfaction, that is, a payment for sin and guilt that satisfied God’s justice.

Article 2 also affirms that Christ’s death was sub­stitutionary. This is conveyed in the words that Christ “was made sin, and became a curse for us and in our stead” and satisfied “on our behalf” [emphasis added]. Christ died in our place. He went where we should have gone, to death, hell, and the grave. He bore the wrath that we deserved, God’s infinite wrath against our sins. Therefore, His death was a substitutionary death.

For whom was Christ a substitute? For whose sins did He make a satisfaction? That brings us to the third cardinal element, the particular aspect of Christ’s death. The Canons reject the Arminian theology (in the Remon­strants’ second point) that Christ “died for all men and every man.” In Article 8, the Canons teach that “it was the will of God that Christ by the blood of the cross. should effectually redeem.. .all those, and those only, who were from eternity chosen to salvation and given to Him by the Father.” Christ died not for all men and for every man. Rather, He died for the elect, “and those only.”

Because Christ’s death is a satisfaction of God’s jus­tice, a substitutionary atonement, and particular, it fol­lows that His redemption is effectual. Article 8 stresses this. It speaks of the “saving efficacy of the most pre­cious death” extending to all the elect. It testifies that Christ by His blood “should effectually redeem” those given Him. And it concludes by spelling out all the blessings that Christ gives to those for whom He died, ending with “the enjoyment of glory in His presence forever.” Christ’s atoning death is the salvation of ev­eryone for whom He died.

It is significant that the Canons discuss the preach­ing of this gospel of the cross (Head 2, Art. 5; Heads 3/4, Arts. 6–10). The connection is that Christ effec­tually redeems everyone given Him by the Father, but salvation is by faith in Christ, and faith comes by the preaching of the gospel. The Arminians charged that the Reformed doctrine of election and of the particular atonement made preaching the gospel impossible. How can the preacher call all who hear to repent and believe in Christ if Christ did not die for each and every person? Sarcastically, they wrote:

This opinion caricatures the doctrine of reprobation.

On the other hand, the Arminians presented their view of preaching. They insisted that when God calls in the preaching, He has “a sincere and completely un-hypocritical intention and will to save” all those who hear the preaching. God “seriously calls and invites by the Word of the Gospel.” And, they taught, God’s “re­vealed will” is that all who hear the call of the gospel will repent, believe in Jesus, and thus be saved.4

What the Arminians taught is the essence of the “well-meant offer of the gospel” that is taught and preached almost universally in the church world today. In such preaching, it is maintained that God offers a salvation readily available to all, and God expresses His will (desire) that every hearer accept the offer, believe, and be saved. God wants to save you!

Notice that to make their position the more decep­tive, the Remonstrants insisted that God “seriously” calls men to repentance and faith. If God does not call seriously, then He is hypocritical and He dissimilates.

The Canons answer most of the Remonstrant posi­tions in Heads 3/4, and there insist that “as many as are called by the gospel, are unfeignedly [seriously] called” (Art. 8). In addition, the Canons speak of the promise of the gospel. Head 2, Article 5, states,

Moreover, the promise of the gospel is that whosoever believeth in Christ crucified shall not perish, but have everlasting life. This promise, together with the command to repent and believe, ought to be declared and published to all nations, and to all persons promiscuously and without distinction, to whom God out of His good pleasure sends the gospel.

It must be made clear that in this explanation of the promise, the Canons are not giving a condition that must be fulfilled. Article 5 has been misunderstood and/or misused to teach that God promises salvation to every hearer on the condition that the hearer will believe. That, of course, is the essence of the Arminians well-meant offer of the gospel. The Canons do not teach this at all.

True it is, that the Canons insist that the gospel prom­ise, together with the command to repent and believe, must be preached as widely as possible. To all who hear, the Reformed preacher must command, “Repent! Believe in Jesus Christ!” And he must also “declare and publish” the promise of the gospel.

However, that promise is not made to every hearer. The commands are directed to every hearer. The prom­ise is published for all to hear. But the promise itself is for everyone who believes in Jesus Christ. In the Can­ons’ the “whosoever believeth” is identifying those who receive eternal life. This is not a conditional promise. Rather, it may be compared to what a teacher might say at noon, “Whoever is sitting in row three may go out first to get lunch.” The teacher is not giving a condition to fill. She is simply identifying those who may exit first. Not all the students are allowed to exit. The benefit is only to those in row three.

Therefore, the promise of Article 5 is not this: God promises to everyone that, if he believes, he will be saved. That is a general, conditional promise. That is to say, it is general, spoken as a promise of God to (and for) every hearer. And it is conditional. The promise is not certain. Whether or not one receives what God promis­es depends on the individual. If he fulfills the condition, and believes, he will receive the promise. If he does not, the promise is of no effect. That is a conditional promise—a promise contingent on man believing.

Contrary to all that, the Canons teach, first, that election is unconditional. God elects eternally unto sal­vation. To each and every elect person, God gives faith. The elect will, therefore, believe. The elect are identified as those that believe.

Second, the Canons teach that Christ died for the elect alone. According to God’s eternal purpose, Christ earned salvation, the Spirit applies that salvation, and the elect are brought “infallibly to salvation.”

1  The five points of the Remonstrants are available many places. This translation is from Homer C. Hoeksema, The Voice of Our Fathers (Grand Rapids, MI: Reformed Free Publishing Associa­tion, 1980), 10–11. 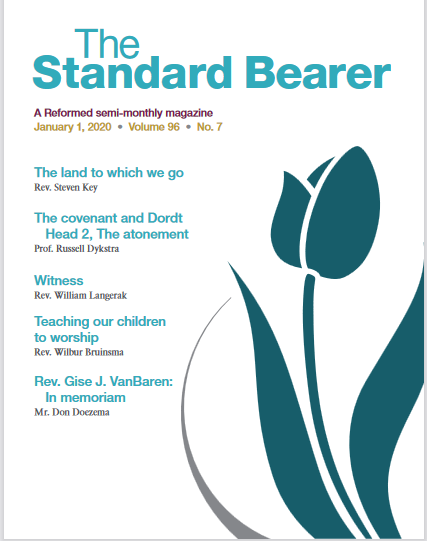