The Councils of Churches Deception

The Councils of Churches Deception

The World Council of Churches and the National Council of Churches go to no trouble to appear thoroughly orthodox in theology and point of view. In this regard they make no claim to being anything but ecumenical machines of modernism and liberalism. But to day liberalism is practically synonymous with leftism. Why then do these councils occasionally bother to make a feeble attempt to leave the impression that either one or both of them are opposed by the communists? Recently, the female president-of the National Council of Churches in a TV interview at Tulsa said that the Communist Party was “against the National Council of Churches.” But, interestingly enough, there is a Christian organization in Tulsa which claims to have every official communist newspaper published since 1960 on file, indexed and cross indexed, and that of the many articles on the NCC—appearing in these red newspapers in the last decade, there is not one that is opposed to the NCC.

An eighth grade Christian school student can see that there is no Christianity in the WCC or the NCC. An eighth grader .in the public school could easily be fooled into thinking that the Bible, which may not be read as the Word of God any more in the public schools, actually supports socialism, especially when appeal is made, for example, to the parable of the laborers in the vineyard, Matt. 20, as teaching that all laborers should be paid the same pay. This parable is said to teach the “social gospel’s” collectivistic principle of “from each according to his ability, to each according to his need.” But there are two kinds of laborers in the parable: bargainers, who get only what they ask for, and trusting ones, who get far more than that for which they thought of asking. The parable distinguishes the people of God and mere men of the world. God’s people are not wage-earners. Those who are, must have justice, so much for so much! No more, no less! Therefore God: is a hirer to mercenaries, a Rewarder to the trusting! God’s people are not slaves, either, as that idea, too, would deny the parable. For slaves do not receive a reward. God’s people are His friend-servants who serve out of friendship to the sovereign God. So the parable does not teach equality of conditions and wages to all the workers alike. If it did, then Jesus should have said, not, as He did, “So the last shall be first, and the first last,” but, “there will be neither first nor last, but all will be alike.” The parable does not teach “from each according to his ability, to each according to his need.” It teaches that men shall be given their own proper reward. To each shall be given according to what is right. That means that to some, the mercenary, they shall receive reward according to their works. The others, the trusting, shall receive the reward of grace. The first group insisted on being paid according to the standard of their own works. They had bargained and were paid according to their collective bargaining. They could claim no injustice in what they finally received. The others received not according to the measure of their work, but according to the grace of the householder. Men set on justice do not understand grace. They shall be, left without grace. Men who want to be limited to justice, who would not go beyond justice, shall have justice! But communists themselves attack these and similar passages as anti-communist. The householder is a landowner—it is “his vineyard.” He is a capitalist: he pays laborers out of his profits. His business is private enterprise, established on his own private property and obtaining workers from the open, free market. His vineyard, furthermore, is not a “closed shop”—no union interfered with the run of business, profits, salaries, hiring or firing. The communist simply cannot accept this parable. Take the parable of the man with a hundred sheep who lost one of them. The communist will tell you that no man has a right to have a hundred sheep. They, and all property, belong to the quibbutz. Take the parable of the householder demanding fruit from his vineyard. The workers of the vineyard refused to give the fruits of it to the owner. They killed his servants, even his Son, who came to obtain the harvest. The communists will tell you that the husbandmen did right to rebel. The owner of the vineyard was a landlord, a capitalist, a property-owner, a speculator in free enterprise. His property should have been confiscated. No, communists themselves do not believe there is any communism, but the very opposite, taught in the Bible.

Christianity is exactly that religion which the liberal, left-wing ecumenical church councilmen do not believe. Neither, though they are moving in that direction of the Roman Catholic Church (and they both deserve each other), do they believe in the Romish religion. Like that produced by the French Revolution, they believe in a civil religion. That is a religion of expediency, a pragmatic religion of social schism, class struggle and ecclesiastical hoodlumism. Liberal churchmen have not gotten their religion from the Bible, nor from the Christian church, much less from the Reformation. Their “Christian”: Agnosticism, their nihilistic Nietzschean God-is-dead religion they have obtained not from atheistic communism. They have rather gotten it from their main source of strength, from the capitalist financiers whose will they must do to stay in business. When they promise a better standard of living, claim to be working for economic and political well-being, they mean that, this shall come about by a complete world economic and social development. There you can see the opiate of the people and who produce it. There you see the quackery of silly Marxism and godless capitalism. The church councils are great Babel-builders, madly busy with extending the kingdom of this world. That is the kingdom of Antichrist. The world court, the world state, the world church, the world community, the world utopia, with headquarters in the USA, are all antichrist.

The old, pure-Pelagian line of Fosdickian modernism is still with us in the Windbeutel philosophy of the councils of churches, which still appeals to a moral sense in all men. This is not to see man as he really is. Mere fallen man has not and never had any moral sense. Man’s moral sense has been debased and depraved. Man as he develops, develops in sin. He may by no stretch of the imagination be called the man of righteousness. Nor is he developing in the direction of righteousness. In that direction, man shows no development whatsoever. As to civilization, man has always more or less steadily developed upward to greater and more glorious heights. But morally and spiritually man develops downward, not upward. The Apostle Paul calls man at his best the man of sin. As such, he is motivated not by the mystery of godliness, but by the mystery of lawlessness. It is that mystery of lawlessness which corrupts man and renders him, not the man of morality, but the man of sin. This, the Bible’s view of man, and therefore God’s view of man, is one of hard-core reality. But neither the political nor the ecclesiastical liberals have been able to face reality. They still believe the hope of the world lies in man. They still imagine that the seeds of universal peace are somewhere imbedded in man. They fail to notice that the mills of God grind slowly, yet also grind exceedingly surely and finely. Therefore, the mystery of lawlessness itself will crush most barbarously the vain dream of international peace in this world. For the Gog and Magog heathen nation powers are amassing and are already aimed at both godless capitalism and apostate Christendom. Scripture says, “When they shall say, ‘Peace and safety’, then sudden destruction cometh upon them, as travail upon a woman with child, and they shall not escape” (I Thess. 5:3). “For they have healed the hurt of the daughter of My people slightly, saying, ‘Peace! peace!’ when there is no peace” (Jer. 8:11). Such words apply to men like Mark Hatfield and Billy Graham who continually talk about world peace and an earthly kingdom, yet both know that there will be no universal peace in this world, that there will be no peace until the Prince of peace returns to establish it, “until He come, whose right it is” (Ezek. 27:27). Our hope is doomed to despairing disappointment if it be placed in a kingdom of this world as dreamed by modern church councilmen. Our only hope must be in that kingdom which is not of this world. That is Christ’s eternal kingdom! and His kingdom is not now from hence! When it comes, it will be visibly and physically established in the heavens and in the earth, but it will then be “the world to come.” Then His kingdom will “break in pieces and consume all these (other) kingdoms, and it shall stand forever” (Dan. 2:44).

The mystery of lawlessness is the great enemy of mankind. That enemy works toward what men fondly dream of as the “one world community.” It labors for the “essential authority” of a United Nations government of the world and the international court of justice. It was the spirit of Cain as he wandered farther from God with his city-building, and of Nimrod after him, to build a great, universal rallying center where men could band together and unite against God as citizens of a world community. But man was not made capable of being a citizen of a world community unless capable of being a slave. For then universal slavery to Antichrist would become a reality. Man can be a slave of a world dictatorship. But he can only be a citizen of a free state, where he is free to pray to the true God, and in the name of Christ, free to read the Bible, free to preach the gospel without the branches of the armed forces, free to worship and serve God as He commands, and free to acknowledge the Son of God as eternal King in the face of atheist, Buddhist and Jew.

It is said that the success of reaching the goal of world community (restoring the Tower of Babel) will depend upon whether men “will accord to the essential authority.” That means men must be willing to give up their present constitutional form of government, throw overboard all nationalism, and like good slaves put their shoulder to the Juggernaut wheel of United Nations control. The false church councils with their false gospel are building Babel, the kingdom of this world especially when they counsel men to “urge their governments to accept the rulings of the International Court of Justice without reservation.” The liberal church councils are a modern Sanhedrin serving the cast out prince of this world. Its talmudical fancies are but the spirit of this world. Truth the world will not tolerate. Wild flatteries under the guise of “social economy” will be delusive bait with which to bring that final Antichrist on the scene. Jesus said to the Jews, “If another come in his own name, him ye will receive” (John 5:43). That man who can so impose upon the Jews without too much difficulty will be able to deceive the world. 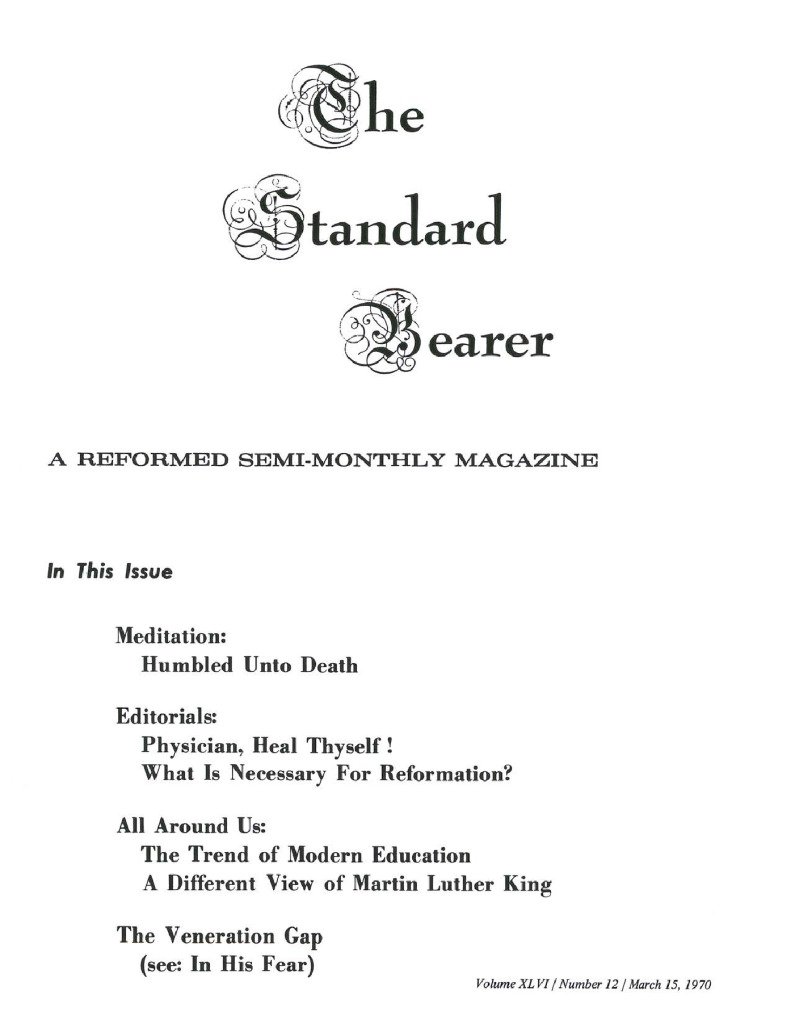