The Command to Isaiah

The Command to Isaiah

1.Isaiah 6:9-13 Its Declaration that his labors would be negative, and, as to the people, in the form of a command ordaining their judgment: “and He said, Go and say thou to this people, Hear ye continually, but perceive not” (v. 9). “This people” refers to Isaiah’s people of unclean lips. They are those among the organic whole of “His people” (Isaiah 5:25) whom the Lord will not call “My people.” They would hear the preaching of the Word of Jehovah, but not to their salvation. That word would be to them a savor of death unto death. This is one side of the polarization caused by the preaching of the word. On this side, God’s Word is sovereignly prohibitory and hardening, forbidding to understand, and rendering them so blind that they would not even care to understand. They saw all the miracles that the Lord had done before their eyes, and had heard the gracious words that fell from His lips. But also to them, in effect, it had to be said, “Yet the Lord hath not given you an heart to perceive, and eyes to see and ears to hear, unto this day” (Deut. 29:2-4). In fact, as Jesus put it, “Why do ye not understand My, speech? even because ye cannot hear My words” (John 8:43); and further, “My word hath no place in you” (v. 37); and still further reason is found in v. 44, “Ye are of your father and the devil . . . He that is of God heareth God’s words; ye therefore hear them not because ye are not of God” (v. 47). Also, “Ye believe not because ye are not of My sheep” (John 10:26).

So they heard the Word incarnate himself preaching among them, but they did not understand Him. They saw with their eyes His wonders, His raising the dead, cleansing the lepers, giving sight to the blind and hearing to the deaf; but they did not perceive that He was the divine Messiah.

“Make fat the heart of this people and its ears make heavy, and its eyes smear over (with paste, i.e., make blind), lest it shall see with its eyes, and with its ears shall hear, and its heart understand, and turn and (there be) healing to it” (v. 10). The sigh of the eye, the hearing ear, the understanding heart and turning to the Lord are all sovereign gifts of God. With the gift of spiritual sight, the sinner sees he is a sinner, then turns to repent. With the gift of hearing, or ears of the heart, the sinner believes and embraces what he hears to his salvation. But these gifts, Isaiah is told, shall be withheld from “this people.” Men will be commanded and held responsible to hear and believe. But they will not be able to do as commanded and held responsible. For the effect of Isaiah’s ministry will be to cause a hardening of the heart of the nation, so that there will be no possibility of its being saved, even by the preaching of that which in itself is for the salvation of His church. Men would be made callous so that they will not believe, will not care to believe, will refuse to believe, will not be able to believe. Still, God would hold them responsible for all this, including their inability. “But they refused to hearken, and pulled away the shoulder, and stopped their ears, that they should not hear. Yea, they made their hearts as an adamant stone, lest they should hear the law, and the words which the Lord of hosts hath sent in His Spirit by the former prophets; therefore came a great wrath from the Lord of hosts” (Zech. 7:11-12).

The purpose and end of Isaiah’s preaching “is a negative end: . . . people must not turn from their sins to God, for if they turn, they will be healed. Strange . . . the ways of . . . God!” He commands all men everywhere to repent and believe. “At the same time He sends forth” a preacher “to prevent this . . . from occurring. He opposes the Word of God with the Word of God,” and so it is “necessary that some do not hear (savingly—RCH) that word . . . In His mysterious wisdom God had foreordained that this people would not respond to the blessed overtures of the gospel. In His sovereign good pleasure . . . not ordaining them unto eternal life, and in the way of their sin “ordained them to dishonor and wrath” (E.J. Young). So it is distinguishing grace alone which makes men to differ; and although it could be said that the proximate cause of this hardening is to be found in man’s sinful heart, still the ultimate cause is God’s sovereign decree of reprobation.

But almost all the Bible commentators have weakened and corrupted this truth. Most of them speak of this as a judicial hardening, that is, God hardened their hearts because they had first hardened their own hearts to forsake Him and His truth. But, Isaiah’s prophecy deals with not a judicial but asovereign hardening. As in Rom. 9:18, “whom He will He hardens,” not “He hardens all who refuse Him and His truth;” This sovereign hardening of sinner’s hearts, in distinction from judicial hardening, is not a truth isolated in Scripture. John 12:37-40 is full of it. “But though He had done so many miracles before them, yet they believed not on Him: that the saying of Isaiah the prophet might be fulfilled, which he spake, ‘Lord, who hath believed our report? and to whom hath the Arm of the Lord been revealed?’ Therefore they could not believe (why not?) because that Isaiah said again, ‘Hehath blinded their eyes, and hardened their hearts (not because they rejected the Lord and refused to believe in Him—the popular thinking; but) that they should not see with their eyes, nor understand with their heart, and be converted, and I should heal them.” This is plain Scripture and should be enough (it is enough for true faith!), but there is more, in Matt. 11:25-26. “At that time Jesus answered and said, I thank Thee, O Father, Lord of heaven and earth, because Thou hast hid these things from the wise and prudent, and hast revealed them unto babes. Even so, Father, for so it seemed good in Thy sight.” Jesus was not annoyed nor disappointed when He was rejected, when whole cities were unmoved, remaining unconverted at His preaching. Neither did He complain against God’s sovereign proceedings in hiding and revealing the gospel. Rather, He gives praise and thanks to God for His sovereignty in bringing about this state of things. He rejoices over it (Luke 10:21), and glorifies the Father for it, acknowledging that what the sovereign Lord does is right. The Father and the Son conceal and reveal, choose and refuse men as They will to do (25, 27). This is the clear, irrefutable Word of God, and childlike faith will unquestioningly receive it and believe it.

2. Its Duration. “Then I said, ‘How long, O Lord (Adonai)?’ And He said, Until that when cities he laid waste without a dweller, and houses without a man, and the land become waste, a desolation” (v. 11). First, spiritual death is prophesied, then material ruin. Then “how long” means not, How long must I endure this hard task in preaching this hard saying, but, How long is this state of Israel’s in hardness and death to continue? As the psalmist, he asks God, Will He always chide? Will He keep His anger forever? Will He be favorable no more? Is His mercy clean gone forever? Hath God forgotten to be gracious? Isaiah submits to the state of things under the divine judgments, and purposes with all his heart to be faithful to the burden of the Word placed on him to proclaim. But he has a holy anxiety and love for his kinsmen according to the flesh (Rom. 9:1-3). He neither coldly and stoically delivered himself of his responsibility to the truth, nor did he in any way compromise the truth, nor fail to present the whole truth, including “the severity of God,” out of natural affection for Israel. It is always true love to preach uncompromisingly the whole counsel of God, no matter the cost or consequences, and to do so in a gracious manner. Not some political or military figure, but a man like Isaiah is “A Man Called Intrepid” because he has the indomitable courage to preach exactly the word God bids him, even though that be judgment and destruction. Yet he is a man kind, tenderhearted, compassionate, not unmoved with great heaviness and continual sorrow of heart that blindness in part happened to Israel.

How long, this blindness, dullness, and deadness? Until it ruins them, their houses, cities, and whole country. “And (until) Jehovah shall have removed far away the (presence of) man and great (shall be) the forsaken (sector) in the midst of the land” (v. 12). They were to be removed far away, not only to Babylon, but to the ends of the earth; as at the present time. There was an initial fulfillment of this prophecy in the destruction of Jerusalem by Nebuchadnezzar and the resultant captivity. Then the land, desolated as it was, made up for its neglected seventh year sabbaths with a sabbath rest of seventy years. Still this prophecy, reaching to the New Testament and to the Jews of Jesus’ day, has a final fulfillment in the destruction of Jerusalem and its people by the Romans in 70 A.D., the effects of which are felt and evident to this day.

3. Its Comfort: a promise. “But yet in it (there shall remain) a tenth, and it shall return, and (again) shall be for a consuming; (but) like a hardy tree, and like an oak, which in. felling (them), a stump (remains) in them. The seed of holiness (grows out of) the stump of it” (v. 13). The judgment shall be repeated in blow after blow, so that there shall be a repetition of it throughout history, even on the remnant. Often the people were destroyed, yet there was always a surviving remnant. “However frequently that very remnant may appear to perish, there shall still be a remnant of the remnant left . . . the holy seed, the true church, ‘the remnant according to the election of grace’ (Rom. 11:5).”—J.A. Alexander. That there is ever a remnant means not, Pelagian-wise, that God picks up the pieces after a project of His gets smashed to smithereens, but that it is a visible evidence of God’s secret counsel and decree of election of vessels of mercy before ordained from destruction to eternal life. So for the elect people of God, as concisely summarized in this promise, His blessing comes to them always out of the depths of the curse. The curse fells the hardy olive tree, yet out of the stump a remnant branch shoots up. A remnant shall return (Isaiah 10:21). For from the depths of the Cross, the holy seed is born; and the promise is sure to all the seed (Rom. 4:16). 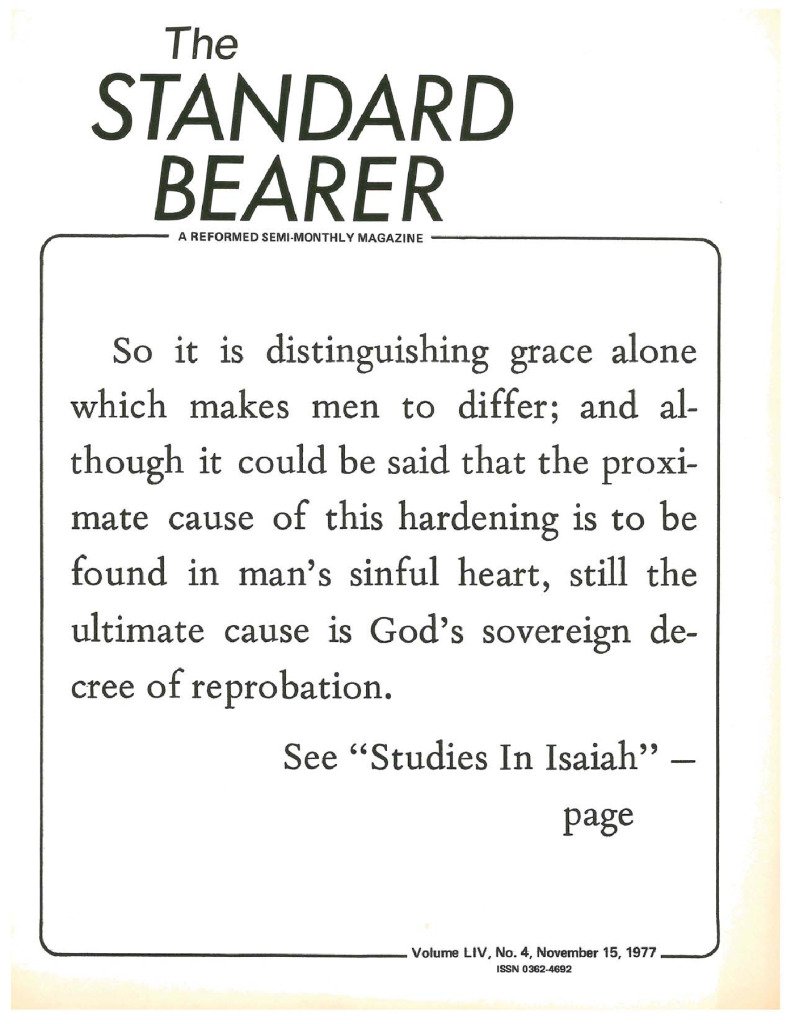