The Coming of King Jesus

The Coming of King Jesus

The focal point of all of history is the coming of Jesus Christ. The whole Old Testament pointed ahead to His birth. The law and the types foreshadowed it, the prophets foretold it, and the people of God prayed for the coming of the Lord’s Anointed, the Messiah.

The long-awaited Messiah came “in the fullness of time” (Gal. 4:4), in the exact time and circumstances sovereignly determined by God. This was the Seed of the Woman that God promised to Adam and Eve so long before (Gen. 3:15). Born of Abraham’s race He was, of Judah’s tribe, of David’s line, in the city of Bethlehem-Ephratah (Micah 5:2). Not one word of God’s promises failed.

O, it took faith even then to know that God was fulfilling His promises. What faith for Mary to believe Gabriel’s astounding pronouncement that she would bear the child whose kingdom would have no end (Luke 1:30-39). It took much faith also for Joseph to accept the angel’s assurance that the child in the womb of his espoused wife was of the Holy Spirit, and was “Jehovah salvation” (Matt. 1:21). Only by faith could the shepherds look at a baby wrapped in rags and leave rejoicing that they had seen their Savior, who is Christ, the Lord (Luke 2: 12, 20). And then there is the steadfast faith of the wise men. Traveling hundreds of miles by faith, they were not discouraged by Jewish apathy and unbelief as they continued to insignificant Bethlehem to worship the one “born king of the Jews” (Matt. 2:1-12).

King He was and is, the eternally anointed King of God (Ps. 2).

Yet, as this Jesus of Nazareth began His public ministry, few agreed with Philip’s faith-informed report to Nathaniel—”we have found him, of whom Moses in the law, and the prophets, did write” (John 1:45). Fewer still concurred with Peter’s God-given confession—”Thou art the Christ, the Son of the living God” (Matt. 16:16). And even the courage of the disciples’ convictions failed in the face of the dreadful cross. The perplexed travelers to Emmaus summed it up for them all—”We thought that it had been he which should have redeemed Israel” (Luke 24:21).

But these faithful had neglected to believe all that the prophets had written. They ignored the prophetic description of their King as meek and lowly (Zech. 9:9). The Servant of Jehovah would be as a lamb before the slaughter, despised and reproached by men, smitten by God, and fatally so (Is. 53).

In fulfillment of God’s word and will, this Messiah died the accursed death, with the mocking and yet accurate placard above His head declaring Him to be “The King of the Jews.”

But this death, as ignominious as it was to the eyes of flesh, was not a defeat. And the proof is that Jesus arose in victory, and ascended to His heavenly throne in triumph, assuring His followers, “All power is given unto me in heaven and in earth” (Matt. 28:18).

Since that day, with one heart and voice, the church confesses her faith in Jesus, the Son of God, who sat down at the right hand of God, angels and authorities and powers being made subject to him (I Pet. 3:22). The church affirms that nothing, absolutely nothing, is outside of Jesus’ control.

By faith. Not by sight.

The scoffers continue to mock as they have for centuries, “If Christ is king, why does He allow all the evils to continue—wars, murders, stealing, poverty, child abuse, and injustices of every sort?”

The Christian sometimes ponders similar questions, but not in doubt of Jesus’ lordship. Rather he wonders how long the righteous Lord can tolerate abounding iniquity and not come rushing in to destroy it.

The believer observes America in swift moral and spiritual decline. The America that has for centuries allowed the church of Christ freely to worship, train ministers, build Christian schools, and send out missionaries. The day comes when these freedoms will be restricted and denied, and the faithful will be persecuted. Is Christ ruling over this process that is leading inexorably to the closing of churches and seminaries and schools and missions?

The Christian observes the unraveling of morals in all institutions and at all levels. He sees on the one hand the deliberate smashing of the very foundations of society (not to mention the church), namely the home, marriage, and the family, and on the other hand, the approval of the sin labeled in Scripture as the most vile of sins. And the Holy Lord Jesus yet rules, right?

The believer observes the appalling, heartrending apostasy in churches that were once stalwart, Reformed and Presbyterian churches. Truth after truth is discarded with nary a protest. And he stands aghast as these same churches debate and then one by one approve of homosexuality. Over this, too, Jesus rules?

The worst is yet to come. The world united in one kingdom of men, with the Antichrist as head, the false church as the whore of the beast, and making war with the saints who will have no place at all to run and hide. And, yes, Jesus is in control also over the coming of this dreadful power.

Those who deny that Jesus is in control do not know the Scriptures. God has determined that, before Jesus comes in judgment, the wickedness of man will be made manifest as never before. This is the idea of the cup or measure of iniquity being filled (Gen. 15:16; Matt. 23:32; Rev. 17:4). God has determined that the “man of sin be revealed, the son of perdition, who opposeth and exalteth himself above all that is called God, or that is worshipped; so that he as God sitteth in the temple of God, showing himself that he is God” (II Thess. 2:3-4). There is the ultimate sin—man declaring that he, not Jehovah, is God. Jesus rules over the course of history so that this kingdom of man will arise, and will come at the time when the total depravity of man is blatantly exposed, his rebellion expressed to the highest degree possible. It cannot come prematurely, for then sin will not be manifest in its most hideous forms. This universal kingdom of man must come after the church has largely forsaken God and worships the beast, after all the powers of the creation are developed and pressed into the service of sin, and after the wound of Babel is healed so all the nations can communicate and contribute to the gross display of depravity. Indeed, Christ rules.

Therefore, let not your heart be troubled. The King is in control, and the King is coming.

The Old Testament prophets saw the Messiah coming in lowliness, but also in power and judgment. Jeremiah prophesied, “Behold, the days come, saith the Lord, that I will raise unto David a righteous Branch, and a King shall reign and prosper, and shall execute judgment and justice in the earth” (Jer. 23:5). Daniel wrote, “I saw in the night visions, and, behold, one like the Son of man came with the clouds of heaven, and came to the Ancient of days, and they brought him near before him. And there was given him dominion, and glory, and a kingdom, that all people, nations, and languages, should serve him: his dominion is an everlasting dominion, which shall not pass away, and his kingdom that which shall not be destroyed” (Dan. 7:13-14). These prophecies are representative of many. How is this contrast—lowly, yet powerful; suffering, yet judging—to be explained?

The first part of the explanation is that Jesus’ first coming was all of that. He came in lowliness and poverty. Yet He came in judgment, as He told His disciples, “Now is the judgment of this world: now shall the prince of this world be cast out” (John 12:31). In the cross He powerfully conquered all His enemies as He saved His church.

The second part is that Jesus comes again to finish the work of salvation through judgment. And these two comings of Jesus are really one work. For that reason He will come the second time as the Lord who has conquered (Rev. 19:12-16). He will come to destroy the kingdom of the Antichrist and all those who opposed Him and persecuted His people (Rev. 6:15-17; 11:15). He comes to burn the whole of this creation and form a new heaven and earth for His people (II Pet. 3.10-13).

To hold fast to these truths takes faith, just as much faith as was required of Mary, Joseph, the shepherds, the wise men, and the disciples when Jesus came the first time. The saints today need faith, a discerning faith.

God is good to His saints living in the last days. For, first, He has revealed those things that must shortly come to pass (Rev. 1:1). The events leading up to the end are clearly revealed. At His first coming, Jesus forewarned His disciples of His imminent death so that they would be prepared. Likewise, He informed His people of the events leading to His second coming so that they will not be caught off guard. Those who know His word are not surprised by the dreadful apostasy, the abounding wickedness, or the threatening clouds of persecution. And these events certainly do not make them doubt the sovereign control of Jesus.

God gave more than bare facts. He gave also the Spirit of Christ, so that His people are able to discern the signs of Christ’s coming. What is the significance of the fall of communism in Russia? What role will the emerging China play in the history of the nations? What will be the effect He

of the global recession? How do the policies of the current President advance the plan of God? Believers have discernment to detect the flow of events leading to the return of Christ.

Even when we cannot put all the pieces together, this we know, that Christ, the Lord, is in control of everything that moves. We are certain that all the events are part of God’s counsel. And Christ is executing that counsel, bringing the day of His return closer and closer.

Be not deceived, fellow believers. Jesus knew that we needed that warning too. “Take heed that no man deceive you…. If it were possible, they shall deceive the very elect” (Matt. 24:4, 24). Satan and his followers will try to deceive you through many means. One deception is that Jesus is not coming. A second is that Jesus is not ruling over all. Over against that, the Reformed believer confidently confesses that Jesus is both controlling all things and coming through all things. If ever there was a time when the believer must confess that Jesus is on the throne and coming (Matt. 26:64), it is in these dark days as history seems to be surging towards the end. Only the power of faith confidently confesses this.

The Lord has instructed us about His return. He has warned us. He commanded us to watch. To that He added blessed promises, comforting promises. “Let not your heart be troubled: ye believe in God, believe also in me…. I go to prepare a place for you. And if I go and prepare a place for you, I will come again, and receive you unto myself; that where I am, there ye may be also” (John 14:1-3). He is coming, and will appear bodily in the exact time and circumstances that God has determined. 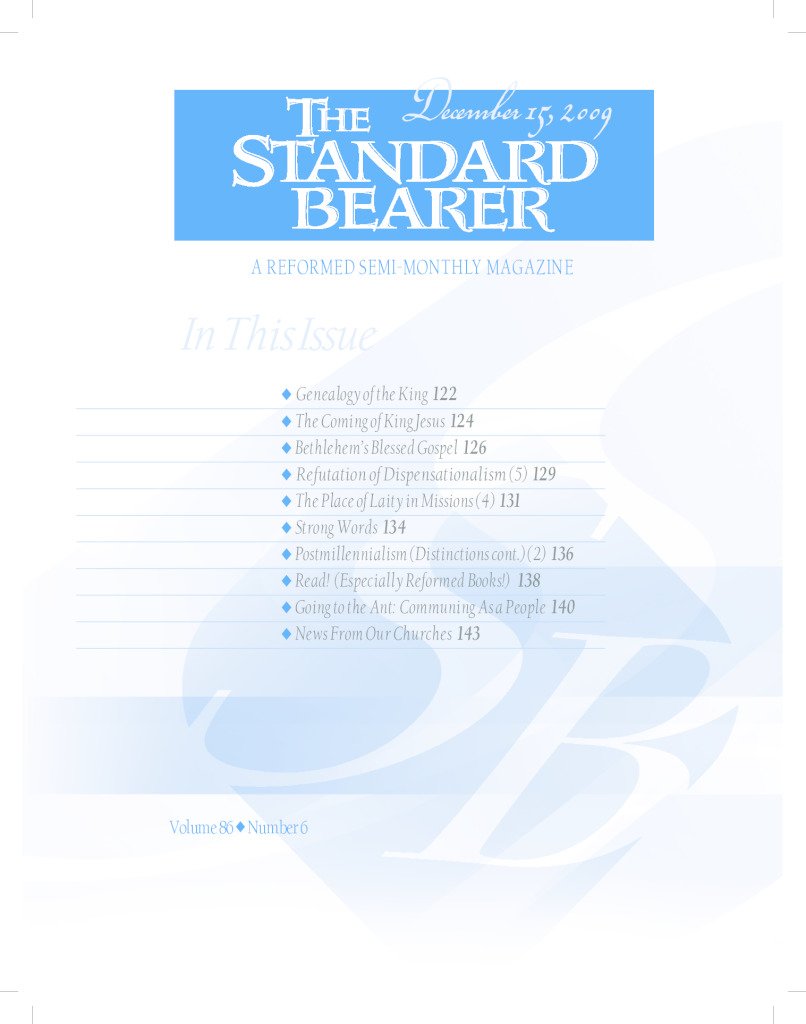