The subject of church weddings is admittedly not very popular. Not only are we under the sacred obligation to promote this kind of a wedding, see Art. 70 of our Church Order, but there is every advantage for our young people and the church in general if this would become the accepted way for marriage.

THE INFLUENCE OF SECULARISM

The road of apostasy is strewn with the skeletons of discarded Isms. Skepticism has been a favorite tool of the devil to cause young people to doubt the Scriptures. The skeptic is “ever learning and never able to come to the knowledge of the truth,” II Tim. 3:7. He raises questions, but does not turn to the only Source Book for correct answers. Soon Skepticism is discarded and replaced by Humanism. Man becomes the only reliable agent for the establishment of truth. All things begin and end in Man. If there is a God, He must serve man or the existence of such a God is useless. It is easily understood that such a view of God in relation to man is soon discarded and man ends with Secularism, he can get along without God. For the bold this means God is dead, for the more timid it means the relevancy of God is no longer a reality, man can live without God. Man becomes his own god. The focal point of human life is man and the only worth while things are those that give man the comfort he seeks. Under the influence of Secularism, the only measure of success is financial gain (Materialism), and the only real pleasure is that which titillates the senses (Hedonism), and the only religion is that which “turns on” (everything from the Jesus Freaks to Neo-Pentecostalism.)

How does this affect marriage? Under the influence of Secularism, marriage is not a divine institution in which a man and woman are called by God to serve God through the union of body, soul, and spirit. Rather, it is a private contract in which two agree to live together as long as they are happy with each other and reserve the right to terminate it when they think happiness would be greater with someone else. Such a view of marriage is man centered and measured only by the selfish desires of man.

Evidence of this Secularism can be seen in the emphasis placed upon the traditional wedding. If marriage is honorable in all things, Heb. 13:4, the honorable character of marriage should be reflected in the wedding. How much of our present day wedding custom is directed by Scripture and how much is influenced by Secularism? Covenant young people should examine this carefully so that we have the proper emphasis at our wedding.

THE ROLE OF THE CHURCHAND STATE INMARRIAGE

Article 70 of our Church Order states, “Since it is proper that the matrimonial state be confirmed in the presence of Christ’s church, according to the form for that purpose, the consistories shall attend to it.”

Prior to the French Revolution (1789) the church through the influence of Roman Catholicism controlled marriage. The state had little if anything to do with it. According to Van Dellen and Monsma’s commentary on this article, change came at the time of the French Revolution when the government claimed the right to control marriage. They claimed that marriage was a legal affair and therefore belonged exclusively within the domain of the government. The Reformation emphasized the need for marriages to be solemnized in the church (Geneva 1547, Register, p. 75). The Dutch government struck a compromise in 1848 when they recognized the role of the government in solemnizing (actually joining in marriage according to the law) the marriage, but also recognized that the church was interested and therefore the marriage was to be confirmed before the church. Hence in our present article of the Church Order we have the idea of a marriage being confirmed before the church.

Subsequently however, things have changed still more for us. Today the government regulates marriage; it does this through the issuance of a license (no longer requiring an oath in Iowa), and grants the privilege of officiating to licensed ministers or officials of the court. It is customary today that solemnization of marriage takes place privately, whether in a home or church, and the minister acts as a servant of the state rather than the church. He is required to sign, and record the pertinent details with the court and keep a file for future reference.

We believe it is more Scriptural that both solemnization and confirmation of marriage should take place before the gathering of the people of God as they are assembled in worship.

WHAT IS A WEDDING?

There are three things involved in a wedding. First, it is the joining in marriage of two individuals. When a young couple secure a marriage license, they are not yet married. The solemnization takes place at the wedding. The license indicates to the man and woman, as well as the officiating person, that they have the right to become married. At the wedding the person who has the legal right to join people in marriage performs this act upon those two individuals. Secondly, the joining in marriage is accompanied with the speaking of vows. The man and woman call upon God as their witness that they take each other to themselves as husband- and wife and promise to live together as husband and wife until death separates them. After these vows are spoken, and usually sealed with a visible token, the ring, they are declared husband and wife. Thirdly, this takes place in the presence of witnesses. There can be no such thing as a secret wedding. The law requires two persons to serve as witnesses and sign the special legal document.

WHAT IS A CHURCH WEDDING?

A church wedding must be distinguished from a wedding in a church. It is a wedding that takes place during an official church service when the congregation is joined together in worship of God.

This involves the following procedure. First, a young couple desire to be united in marriage during such a service and they request the consistory to make arrangements for this. The consistory must act upon this request and regulate this service as they must all services. Secondly, the consistory issues a call to worship. This is particularly true if this is to be a special midweek service. If this will take place on Sunday, the consistory simply announces the fact that such a wedding will take place. Thirdly, the congregation is informed in the announcement of the impending marriage, that if there are any lawful objections, these should be presented to them. The congregation approbates the marriage. Finally, the service is a regular service of worship and includes the proper salutations, doxologies, prayers, sermon, congregational singing, reading of the official form for marriage. If it is on Sunday, an offering would be received for the announced cause.

ADVANTAGES OF CHURCH WEDDINGS ON SUNDAY

It is the influence of Secularism that makes young people imagine that their marriage is their own business and no one else’s. Not only parents are very much interested whom their children marry, but the entire church is interested. Marriage must be viewed in the context of the communion of saints. Just as surely as the entire church is interested in the birth of children, the education of these children, the sickness and death of her members, so also is she interested in the marriages of her members.

It is this sincere interest that should be allowed expression. We as young people should recognize that we desire the approval of God upon our marriage. This approval is expressed through the consistory’s and congregation’s approval. Private weddings do not allow for this at all. It becomes a hollow ring, when the minister intones, “I take you all, who are met here to witness that there is brought no lawful impediment,” at a private ceremony. It takes on special significance when it is part of the divine worship service.

How does the congregation become active participants at a church wedding? In three ways. First, by either vocally or silently approving the announced union. This would solve a difficult problem for the minister who is asked to officiate at a wedding of young people who haven’t even decided whether they will attend church or where it will be. Sometimes a young person has decided to leave our church and still asks the minister of the church they will leave, to officiate. It would be obvious that church membership must be resolved before marriage if the church wedding would assume its proper place. If one has no religion, why ask a minister to officiate; let them be honest and go to the civil authority. If one will leave the church let them also be honest and ask the minister whose church they will attend to officiate. Secondly, by being married before the congregation at a public worship service, the whole congregation not only speaks approval: they also have opportunity to join in prayer seeking God’s blessing upon the marriage. We need this in our age when young people, who are joined in marriage, are tested and tempted. In the communion of saints we pray for God’s grace and the presence of the Holy Spirit upon them, that they may be faithful to their vows and be blessed by God so that His purpose will be furthered through their marriage.

In addition to this, the preaching of the Word would be recognized as necessary at such an occasion. Who would dare to say that marriage is to be taken lightly? No, we must not go to the other extreme and make it a sacrament, as if God will communicate special grace through the marriage union if it is officially begun before the church. One of the means of grace, however, is the preaching of the Word. Through the word preached, God by the Holy Spirit gives the necessary strength to overcome Secularism. We need more of this in our day.

Secondly, there is the problem of sufficient seating space. We suggest that a wedding that is to take place at the Sunday worship service be announced to relatives and friends. There is no need to invite every uncle and niece to one’s wedding. If the wedding takes place before the congregation at a worship service, only the ones who desire to worship will be present, and that should be paramount.

Thirdly, a Sunday wedding would help a young couple place proper emphasis on the spiritual significance of the event. Wedding music, the attire of bride, groom, and attendants, the church setting, the character of the witnesses, would be placed in proper focus.

In this way the bride and groom would have their proper place in the midst of God’s people; their beginning would be indeed in the name of the Lord.

What about the reception? Why not have that on a week night, either before the wedding or after. Send out invitations to relatives and friends, receive gifts, have a short program, and make that special evening of commemoration.

Tradition is hard to change. Wedding tradition is a matter of imitation. Whom are we imitating? It is not first of all a question of what friends, relatives, neighbors will think; rather we should ask, how can we glorify God on the most significant day of our lives.

The answer is to be joined in marriage in thankful worship of God.

The fruits will become evident in a marriage that will carry through this emphasis that God is first in our lives. Such marriage receives divine blessing and strength from the God who hears our vows. 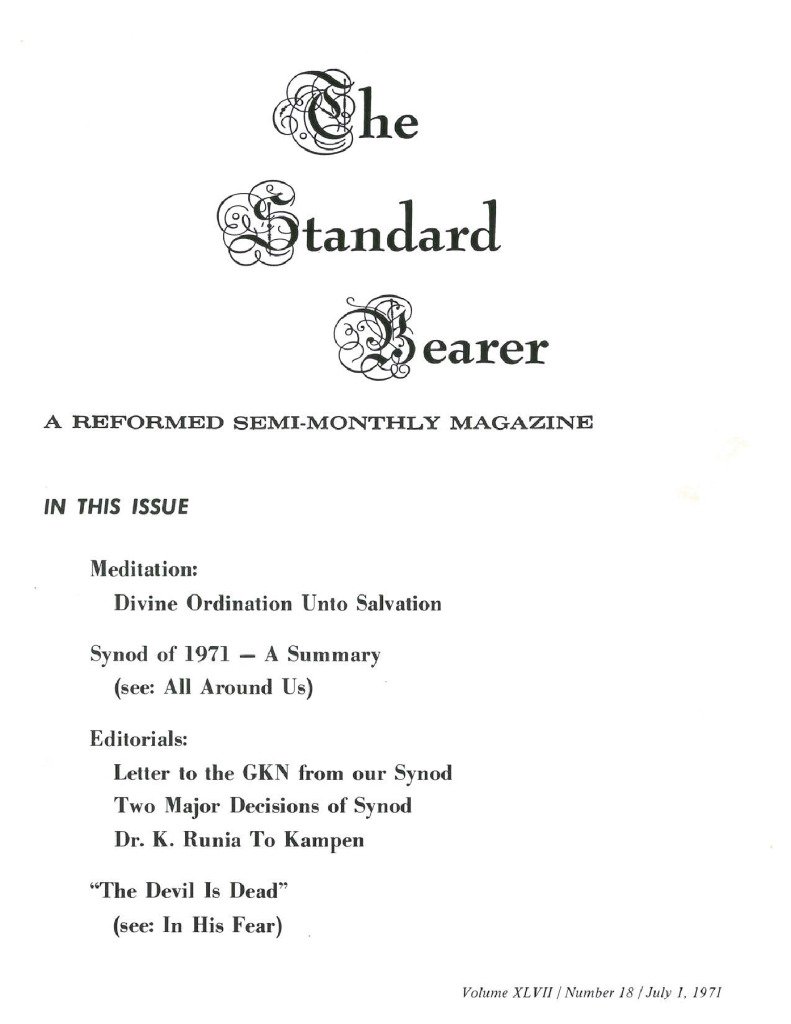