The Church Protected And Purified

The Church Protected And Purified

1. The Church Defended. In our last installment we saw that within the church organism of Isaiah’s day there was “a generation pure in their own eyes” and so “not washed from their filthiness” (Prov. 30:12). Here the Lord calls the glory of their gaudery, which they deemed so wonderfully clean, “their filthiness” (Isaiah 4:4), and just as much so as the bloody violence of criminals in Jerusalem. But also the glories of the world’s best, their wealth, business, idealism, and good works, being, as they all are without God, filth.

“And Jehovah will create upon all the dwellingplace oft Mount Zion and upon her places of convocation a cloud by day and smoke and a brightness of flaming fire (by) night; for upon all the glory (shall be) a covering” (Heb. 4:5). When the church is purified, the glory of salvation shall appear. So it is prophesied, “Arise, shine! for thy light is come, and the glory of the Lord is risen upon thee” (Isaiah 60:1), the fulfillment of which is recorded in Revelation 21. The glory and work of salvation is like that of creation: God spoke, and it was done; He commanded and it stood fast. Creation is solely the work of God. (The Creator, not the creature, is active in the work of creation.) So salvation is exclusively God’s work, as those being saved are spiritually dead. He creates New Heavens and New Earth. There He dwells in Zion, which whole mount becomes the holy of holies. But even now, Zion is wherever the Word of God is preached. The churches in the world are centers of the communion of saints. These have over them the covering of the divine benediction. The picture is that of the church in the wilderness with its pillar of cloud protecting God’s people, and pillar of fire devouring the wicked, and keeping His people from wandering off into the darkness. As in the beginning God exerted His almighty creative power, in the Red Sea His redemptive power; and in the wilderness His daily miracle power, so He will deliver and protect His church to the end, and make every single home in the Israel of God His holy Tabernacle, as the typical tabernacle exclusively was.

2. The Church a Defence.

“And a booth shall be for daytime shade from the heat, and for a refuge, and for a hiding place from storm and from rain” (Heb. 4:6). The church of the New Testament dispensation is and enjoys one age-long Feast of Succoth. Wherever the Word of God is preached there is a Feast of Tabernacles. As there was in the original paradise no storm or rain, so in paradise regained, in the New Jerusalem (not in the millennium, which turns out to be a colossal failure) there will be no damaging changes of weather. “The sun shall not smite thee by day, nor the moon by night. The Lord shall preserve thee from all evil.” (Ps. 121:6-7a) (Cp. also Ps. 32:7, 2; Ps. 91:9;Prov. 18:10; Isaiah 25:4, 26:20, 32:2). “In this world we must expect change of weather, and all the inconveniences that attend it; we shall meet with storm and rain in this lower region, and at other times, the heat of the day . . . But God is a refuge to His people in all weathers.” (M. Henry) This He is in Christ, for in Himself, absolutely considered, He is a consuming fire. To attempt to approach God, even to consider Him, Unitarian fashion, apart from His co-equal Son, the eternal Word incarnate, is to fantasize about God and reach out to a humanly invented godhead. None but Christ, in whom dwelleth all the fullness of the Godhead bodily, is our refuge and our strength.

THE PARABLE OF THE LORD’S VINEYARD Isaiah 5:1-7

1. The Great Labors God Had Bestowed on It.

Here is the gloomy picture of the guilt and judgment of Israel according to the flesh without presenting the cheerful side of the deliverance of the Israel of God. The chapter is not limited to one event, but was true of reprobate Israel in the time of the first or Egyptian captivity of His people for four hundred years, in the time of the Judges, in the captivities (under the Assyrians, the Babylonians, the Persians, Greeks, Romans) and especially after the rejection of their Messiah, in the destruction of Jerusalem, 70 A.D., when darkness forever descended on them. Israel in parable is seen as a vineyard of the Lord. When the vineyard does not produce as expected, it is delivered up to judgment. The bad fruit produced is described; as well as a kind of judgment which would follow.

“I will sing now concerning my beloved, a song of my beloved concerning his vineyard. A vineyard had become my beloved’s in the horn (the protective encirclement) of the son of (an expert and rich producer of olive) oil” (Heb. 5:1, See KJV, marg.) The song refers to the singer’s own beloved, his dearest one, not his cousin (Luther), nor his uncle (Vulgate). It is a song concerning the beloved’s vineyard, a song of the beloved, the Lord himself (v. 7). Isaiah like John the Baptist thinks of himself as the friend of the bridegroom, the beloved in whom we are accepted. The prophets, too, are the friends of the bridegroom. The bridegroom, being the beloved, is to be loved. For “if any man love not our Lord Jesus Christ, let him be anathema. . . .” Jesus said of some in His day, “I know you; you have not the love of God in you.” He said to His own disciples, “If any man love Me, let him come after Me and take up his cross daily and follow Me.” Actually, the song does not go on in this lovely vein, for it is really a lament, an instruction, a denunciation.

2. The Disappointing of His Expectations of It. “And he dug it up (spaded it), and he stoned it, and planted (it) a vine, and built a tower in the midst of it, and also a wine-press he hewed in it; and he waited for (its) producing grapes, and it produced stinks” (Heb. 5:2). The vineyard, situated like a beautiful diamond in a perfect setting, was provided with everything to make it the best vineyard producing the richest vintage. Verse one is expressive of great fruitfulness. The son of oil is “one who has oil and is rich with oil” (Luther). To bring this about, he spaded it, cleared it of stones, the Owner laboring faithfully to do this. (The Owner does promise His spiritual Israel to take the stony heart out of their flesh.) Then he planted his vine, and out of the stones removed from the field he built a guard-tower for protection of the vineyard and for a comfortable covert for the Owner which he could even use as a honeymoon lodge (Song 7:12). Also he hewed a wine-press (out of rock!) in order to provide everything necessary to produce the best vineyard and the highest quality grapes.

The Lord does not survey His vineyard from its tower to see which vines grow strongest, noting which bring forth the best fruits, and so determining to select them. For that is Arminianism. Jehovah might sit on His throne to eternity without finding one worthy of His choice, if He operated that way. No, but the vineyard represents the sovereign choosing of Israel to be God’s elect people. The vineyard had husbandmen who tended it, spaded and dunged its soil. This the prophets and later the apostles did in teaching the law and preaching the gospel. So God first chose Israel, not Israel the Lord. God’s choosing of Israel was by grace alone. God’s election of the vineyard implies an organic election. God predestinated the entire organism. Of that organism, some of the branches were ordained to be cut off and destroyed (vv. 5-6), (every plant which My heavenly Father hath not planted shall be rooted up!), while the elect nucleus shall be preserved (Ps. 80:8-19).

There are branches on the vine which do not produce fruit. “He waited for (its) producing grapes.” The vine as it grew was tended and watched in justifiable anticipation of a crop. But it brought forth withered, dried up, stinking, rotted grapes. The vine proved worthless, and that in the sense of the useless chaff of the threshing floor (Matt. 3:12). It turned out that the vineyard was not worth two cents an acre.

“And now, dweller of Jerusalem and man of Judah, judge you, I pray, between Me and between My vineyard” (Heb. 5:3). That is, as Nathan put a parable to David (II Sam. 12:1) in which he intended that David judge the man in the parable who appropriated the poor man’s ewe lamb, so you be the judge. In this way David was led to see that the parable applied actually and only to himself. In this way the man of Judah within the framework of the parable, umpiring between the beloved friend and his. vineyard, would, unawares, pass judgment on himself and justify God.

“What to do more to my vineyard and (that) I have not done in it? Why waited I (for it) to produce grapes, and (why) produced it stinks?” (Heb. 5:4). Israel had the highest privileges (cp. Rom. 9:4-5; Rom. 3:1-2), the richest blessings, the greatest advantages, and what better culture could they have had (particularly, spiritual culture)? So that what they must admit to is that their wickedness in professing the true religion while lacking any possession of it amounted to the most unaccountable and unreasonable thing in the world. For they who own Christ as “my Beloved” in truth, do so, if necessary, at the expense of forsaking father, mother, wife, children, house, lands and his own life also. But in the day of judgment, the wicked, hypocrites and mere professors will have to confess, as Pharaoh did, The Lord is righteous!

3. The End and Ruin it Deserved. “And now, I will tell you, if you please, the thing which I will do to my vineyard: I will take away the hedge of it, and it shall be consumed. I will break down its wall, and it shall be trodden down” (Heb. 5:5). Now the Lord goes on to answer His own question. It is peppered with biting wrath, coming, too, as something of a surprise, as we would expect further digging, dunging, or some last ditch mode of cultivation, and not, as we have, the threatening of the vine’s destruction. Not only no more good gifts will God bestow on them, but they shall be plundered, ruined by their enemies and trodden down by the Gentiles, the wrath of God coming upon them to the uttermost. The vineyard (theocracy) would then cease to be, The church of that nation would be unchurched. That is, since church means the Lord’s, they would no more be the Lord’s. They would no more be Ammi, but Lo-ammi, Not My People. They would no more be a peculiar people, but become so common as to be scattered among all nations. 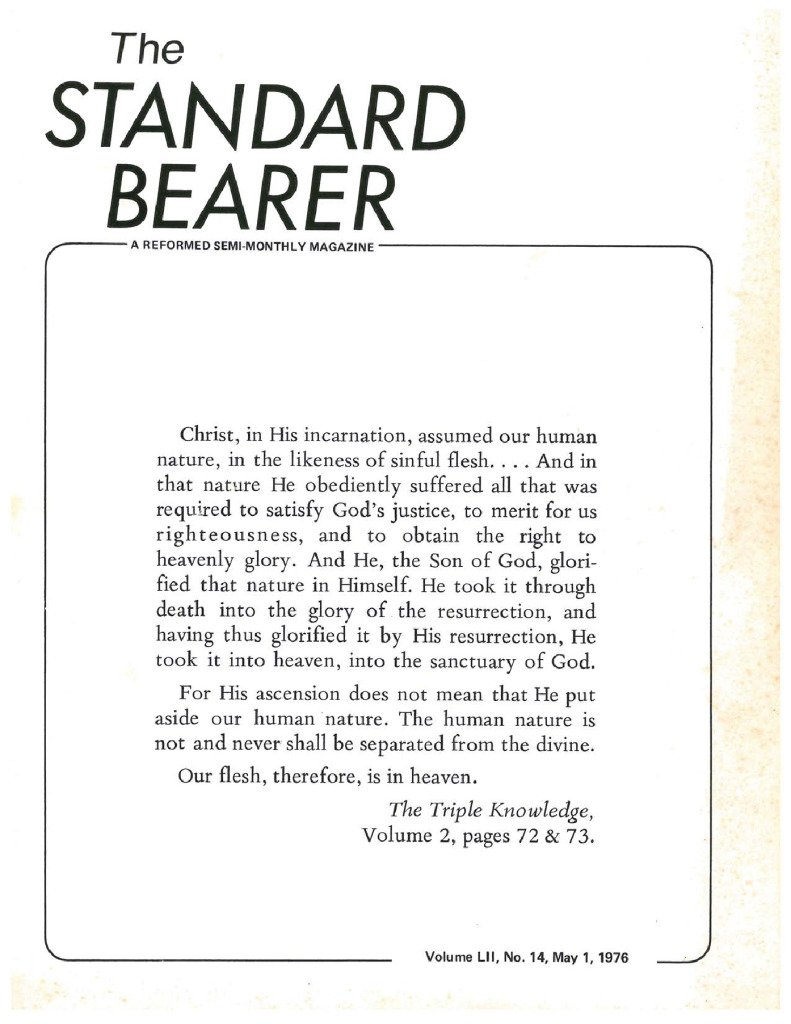