The Church of the Present Day and Persecution (1)

The Church of the Present Day and Persecution (1)

“Yea, and all that will live godly in Christ Jesus shall suffer persecution.”

The striking thing about the text quoted above is that Paul states it as an absolute rule. He does not allow fro any exceptions. He says not simply that the church will have much persecution in the New Testament age, or that many of the church will know what persecution is, but that everyone who will live godly (piously, reverently) shall suffer persecution. Such is the fact.

These words are in harmony with Christ’s words: “but because ye are not of the world, but I have chosen you out of the world, therefore the world hateth you. Remember the word that I said unto you, The servant is not greater than his lord. If they have persecuted Me, they will also persecute you” (John 15:19, 20). Persecution is part and parcel of the life of every Christian who bears Christ’s Name in sincerity, his walk being consistent with his confession.

It is my intention to consider how these words apply to us who are living in the last half of the twentieth century. If there is one thing that seemingly is foreign to our experience it is persecution. This is not to say that there are not members of the body of Christ in this present day who are now suffering bodily persecution at the hands of godless men and threats against their person because of their confession. Tales trickle out from behind the Iron and Bamboo Curtains of those who have been imprisoned and disfigured for Christ’s sake. Indeed, persecution of Christians through inquisition has not been irradicated by man. But as for our own persons, persecution seems to touch us very little, if at all. Persecution? What is that?

Exactly because at the moment persecution seems so far removed from us personally, it is well to consider this matter now and again. It is well to consider it because of what the future holds for the church of these last days—almost certainly for some of us personally, namely, bitter, bodily suffering. The Great Tribulation is, as we know, a sign of the imminent reappearance of the Lord. “Immediately after the tribulation of those days shall the sun be darkened . . . . .And then shall appear the sign of the Son of man in heaven: and then shall all the tribes of the earth mourn, and they shall see the Son of man coming in the clouds of heaven with power and great glory” (Matt. 24:29, 30).

There are those who challenge this and speak of these words of Christ as having been fulfilled at the time of the fall of Jerusalem (A.D. 70). Or they speak of a rapture whereby the Lord catches His people up into heaven before the Great Tribulation, which shall be directed at the Jews primarily. Such is, however, a false doctrine and can only have evil consequences. Such instills a false hope in the hearts of members of the church. It shall result in a final falling-away. Those who nourish this false hope will be able to submit to every law Antichrist legislates, which will declare, “Obey this or be counted a rebel and bear the consequences.” After all, they will reason, our Christian faith was not to put us into this predicament. Had they not been promised that, because they believed on Jesus, they would not have to suffer bodily persecution? So they will justify their denying the Name of Christ and engaging in various unbiblical practices. Indeed, as Christ says in Matthew 24:10, “And then shall many be offended, and shall betray one another, and shall hate one another.” It is one thing to confess that Jesus is Lord when there is little cost for one’s person in so doing, and quite another when the blistering heat of persecution relentlessly beats down on one. To survive such times one must be truly rooted in Christ Jesus. Those who are not will fall into the category of what one might call “shallow-soil hearers.” “But he that received the seed into stony places, the same is he that heareth the Word, and anon with joy receiveth it; Yet hath he not root in himself, but dureth for a while: for when tribulation or persecution ariseth because of the Word, by and by he is offended” (Matt. 13:20, 21).

What these texts make clear for our purposes is that he who is not preparing himself for the fierceness of the persecution will wither away and be exposed as not having been firmly rooted and grounded in Christ as the Pillar of all truth. Those who take these words seriously prepare themselves. How well prepared areyou? What are you doing to prepare yourself?

Especially pertinent to our discussion is the matter of persecution at the present. It is my contention that even at the present time children of God are the objects of a form of persecution. This should not surprise us.Revelation 12 speaks of the casting of Satan out of heaven into the world by the ascended Christ at the beginning of the New Testament age. Satan is there portrayed as a great dragon persecuting the woman, who represents the Old Testament church (vs. 13). In verse 17 we read, “And the dragon was wroth with the woman, and went to make war with the remnant of her seed, which keep the commandments of God, and have the testimony of Jesus Christ.” The whole of New Testament history is one of Satan engaging in war against the elect remnant, in enmity seeking out the seven thousand who have not bowed the knee to Baal. That war still continues today. That we must keep in mind. There is no truce. To think that there is is to be deceived yet again. This war in which Satan is constantly engaged, which is ultimately to the death, must always reveal itself in persecution of some form or the other. That includes today.

Persecution does not always come as a direct threat of violence upon one’s person in response to one’s stand. It can also take more subtle forms. Remember always what Satan’s ultimate goal is, to remove from this world the witness of the church to the Sovereign God, to His truth in Christ, and to Christ’s Kingdom; He wants to silence the church’s testimony against the lie. To accomplish this purpose, other means less severe in nature than that of bodily injury can be used—means, nonetheless, whereby pressure is brought to bear upon the Christian to compel him to compromise his godly way (opening the way for the next generation to forsake it completely), and to cease his militant stand against that which is false and evil. Such means are much in evidence today. And especially what I have reference to is that which has come to be called “peer pressure.”

Peer pressure is the pressure to conform to the standards set by some dominant group as that affects one’s attitudes and behavior, the whole of one’s life style. Everything is governed by “What will people, especially those my age, think?” We become more conscious of their judgments than of Gods. The man who resists conformity is threatened with being excluded and scorned.

We commonly think of this in terms of young people, the teenage years, when peer pressure means so much, molding so much of their behavior, determining everything from the kind of socks they wear, to the way they cut their hair, to the music they listen to. But we are mistaken if we imagine that peer pressure is something with which only the teenage has to contend. It is just as intense and unrelenting for the adult. This pressure is especially acute upon young couples as they must make crucial decisions in determining the pattern of their home life. To what extent is it going to conform to the current norms and practices of society? Are we going to “wait” to have children until we have “adjusted” to each other and “established” a good home environment (as though courtship has nothing to do with becoming “adjusted” to each other), or are we going to pray for covenant seed from the very beginning? I can tell you what the “wise” of this world would counsel, but at the same time I would be at a loss to tell you what book of the Bible such “wisdom” comes from, unless it’s Hezekiah. That seems to be the favorite book of most modern “Christian” counselors these days. But more about these matters later.

Peer pressure, practically put, translates into reproach and ridicule for not conforming to society’s world and life view. And, you understand, this way of life is not determined by any synodical decision, but by the advertisers of Madison Avenue. It is the world that determines the climate, the way of life in which the Christian finds himself. And the child of God must decide either to adapt himself to that way of life, going by what is currently acceptable, making various compromises as Lot did, in order to smooth the way .for himself; or he must resolve to swim against the current, so to speak, and follow a different course, one which is counted peculiar at best, and downright stupid and irresponsible at worst. “Where is your common-sense?” one is asked. Who could be so dense! Indeed, to resist the way of “common sense,” as the world defines it, in order to pursue the way of righteousness takes an “uncommon” grace. One must be willing to stand alone. Few such can be found. As Christ states, “Nevertheless, when the Son of man cometh, shall He find faith on the earth?”

Such is the form persecution takes today. It is not overt and physical, but indirect, and leaves not a mark on you, that is, on your body. But it can and has left very definite marks on the outlook and walk of members of the Christian church. We must consider some of these threats next time, D.V.

In parting I remind you that Paul says, “All that will livegodly (or piously) shall suffer persecution.” Persecution does not come to you as a matter of course, simply because you say that you are a Christian. The world can easily tolerate those who are content to say that they are Christians, but whose lives reflect only minor differences. Persecution, reproach, scorn falls upon those who live their Christianity, upon men governed by the principles of God’s Word rather than by popular opinion. Such the world despises and the false church hates. But see how easy it is to avoid derision? Be a Christian in name only, compromise a few principles. Such is the temptation. Is it a temptation to which you are yielding, or which you resist? Be ye not conformed, but transformed! 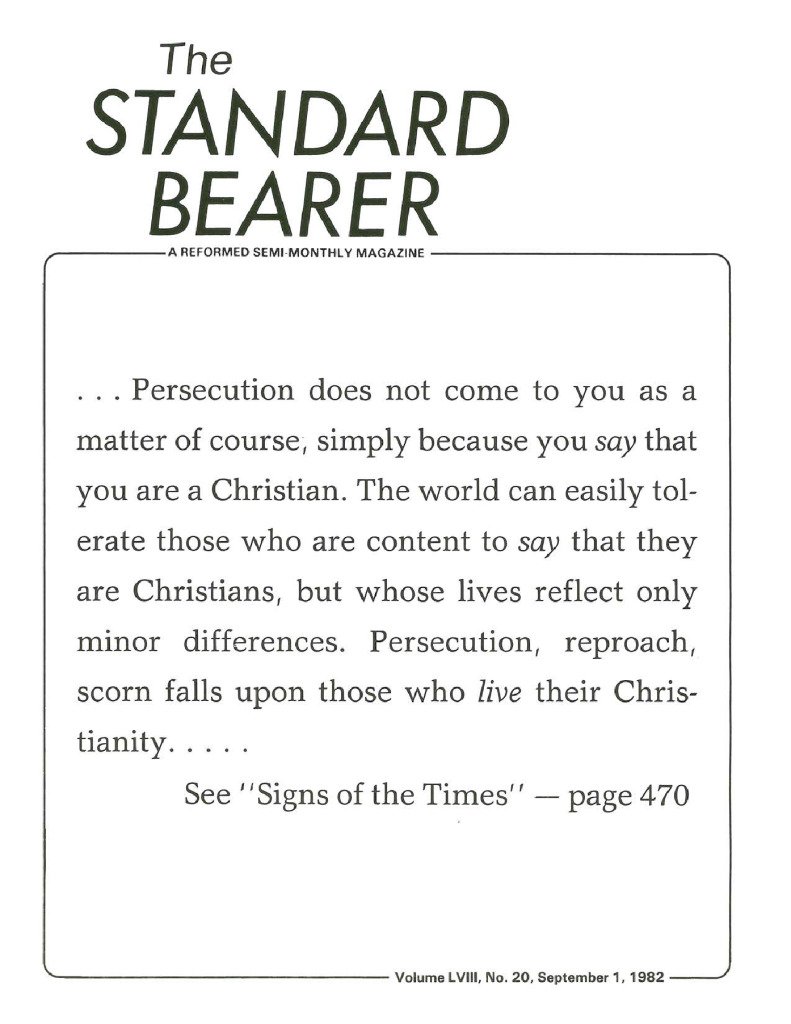