The Church and the Sacramentss, The Time of the Reformation, Views on the Church, Material Principle (continued)

The Church and the Sacramentss, The Time of the Reformation, Views on the Church, Material Principle (continued)

“The holy Synod declares first, that, for the correct and sound understanding of the doctrine of Justification, it is necessary that each one recognize and confess, that, whereas all men had lost their innocence in the prevarication of Adam-having become unclean, and, as the apostle says, by nature children of wrath, as (this Synod) has set forth in the decree on original sin-they were so far the servants of sin, and under the power of the devil and of death, that not the Gentiles .only by the force of nature, but not even the Jews by the very letter itself of the law of Moses, were able to be liberated, or to arise, there from; although freewill, attenuated as it was in its powers, and bent down, was by no means extinguished in them.”

We merely wish to call attention to the fact that, already in this first chapter on Justification, Rome sets forth its pelagian conception of the free will of man. This freewill was bent down in its powers but by no means extinguished.

“But, though He died for all, yet do not all receive the benefit of his death, but those only unto whom the merit of his passion is communicated. For as in truth men, if they were not born propagated of the seed of Adam, would not be born unjust—seeing that, by that propagation, they contract through him, when they are conceived, injustice as their own—so, if they were not born again in Christ, they never would be justified; seeing that, in that new birth, there is bestowed upon them, through the merit of his passion, the grace whereby they are made just. For this benefit the apostle exhorts us, evermore to give thanks to the Father, who hath made us worthy to be partakers of the lot of the saints in light, and hath delivered us from the power of darkness, and hath translated us into the Kingdom of the Son of his love, in whom we have redemption, and remission of sins.”

In connection with this quotation of Rome we wish to make two observations. Notice, in the first place, that already in this article Rome advocated universal atonement, declaring that Jesus died for all. And, in the second place, also already in this article Rome gives expression to its conception of justification. Rome practically identified justification with sanctification. Here we read that a person would never be justified if he were not born again in Christ; and we also read that, in that new birth there is bestowed upon us, through the merit of Christ’s passion, the grace whereby they are made just.

On The Necessity, In Adults, Of Preparation For Justification And Whence It Proceeds

The Synod furthermore declares, that, in adults, the beginning of the said Justification is to be derived from the prevenient grace of God, through Jesus Christ, that is to say, from his vocation, whereby, without any merits existing on their parts, they are called; that so they, who by sins were alienated from God, may be disposed through his quickening and assisting grace, to convert themselves to their own justification, by freely assenting to and co-operating with that said grace: in such sort that, while God touches the heart of man by the illumination of the Holy Ghost, neither is man himself utterly inactive while he received that inspiration, forasmuch as he is also able to reject it; yet is he not able, by his own free will, without the grace of God, to move himself unto justice in his sight. Whence, when it is said in the sacred writings: Turn ye to me, and I will turn to you, we are admonished of our liberty; and when we answer: Convert us, O Lord, to thee, and we shall be converted, we confess that we are prevented (anticipated) by the grace of God.”

In the article the Romanists speak of the prevenient grace of God, the grace of the Lord that goes before, precedes. They also speak of this grace as assisting grace whereby we are able to convert ourselves unto our own justification, by freely assenting to and cooperating with the same. Besides, while this grace is described as a work of God’s Spirit whereby the Lord touches the heart of man, this work of the Lord is irresistible and, can be rejected. This is Rome’s pelagian conception of the free will of man. And so man is prepared for his justification, by cooperating with this grace of God whereby the sinner prepares himself for his justification.

The Manner Of Preparation

“Now they (adults) are disposed unto the said justice, when, excited and assisted by divine grace, conceiving faith by hearing, they are freely moved towards God, believing those things to be true which God has revealed and promised—and this especially, that God justifies the impious by his grace, through the redemption that is in Christ Jesus; and when, understanding themselves to be sinners, they, by turning themselves, from the fear of divine justice whereby they are profitably agitated, to consider the mercy of God, are raised unto hope, confiding that God will be propitious to them for Christ’s sake; and they begin to love him as the fountain of all justice; and are therefore moved against sins by a certain hatred and detestation, to wit, by that penitence which must be performed before baptism: lastly, when they purpose to receive baptism, to begin a new life, and tokeep the commandments of God. Concerning this disposition it is written: He that cometh to God, must believe that he is, and is a rewarder to them that seek him; and, Be of good faith, son, thy sins are forgiven thee; and, The fear of the Lord driveth out sin; and, Do penance, and be baptized every one of you in the name of Jesus Christ, for the remission of your sins, and you shall receive the gift of the Holy Ghost; and, Going, therefore, teach ye all nations, baptizing them in the name of the Father; and of the Son, and of the Holy Ghost; finally, Prepare your hearts unto the Lord.”

In this article Rome continues to speak of God’s assisting grace. They also speak here of “faith by hearing,” and Rome’s conception of faith is that it is assent to the truth, simply believing those things to be true which the Lord has revealed and promised. So, assisted by the grace, and accepting as true what God has revealed and promised, the sinner now considers the mercy of God, believes that God will be propitious to him for Christ’s sake, and begins to love him as the fountain of all justice.

However, he must be moved against sins by a certain hatred and detestation and reveal this by that penitence which must be performed before baptism. Notice, too, that this article, when quoting Acts 2:38, translates: “Do penance.” This word, however, does not mean, “Do penance,” as Rome translates, but it is the word which means “a change of the mind,” and it simply means: Repent. It may also be in order at this time to say a few words about Rome’s conception of baptism. According to Rome the sacrament of baptism effects justification, the remission of sin; this forgiveness of sin does not merely refer to the pardon of sin but also to the removal of sin. However, baptism does not only avail for the remission of sin and its removal, but also for the inward sanctification of the soul. Baptism, according to Rome, is the sacrament of regeneration. And, water is absolutely necessary for the administration of this sacrament. In the case of infants the word of regeneration is always effective. However, in the case of adults, it is not always effective. The adult can gratefully accept and use the grace of regeneration, but he can also resist it and make it ineffective. And, it is always possible that they who have appropriated it will lose it again. The Roman Catholic Church anathematizes those who teach that Christian baptism has no superior efficacy to that of John the Baptist; that true, natural water is not essential in the administration of this sacrament, or that the language of our Lord in John 3:5, “Except a man be born of water,” etc., is to be understood metaphorically. And it is also the conception of Rome that baptism delivers from the guilt of original sin and of all actual sins committed up to the time of baptism.

What The Justification Of The Impious Is, And What Are The Causes Thereof

“This disposition, or preparation, is followed by Justification itself, which is not remission of sins merely, but also the sanctification and renewal of the inward man, through the voluntary reception of the grace, and of the gifts, whereby man of unjust becomes just, and of an enemy a friend, that so he may be an heir according to hope of life everlasting.”

The Lord willing, we will continue with the quotation of the seventh article on the Romish Council of Trent of Justification. But one may note from what we have quoted that Rome, when speaking of Justification, does not refer to the remission of sins merely, but also to sanctification and renewal of the inward man. And we may again point to the fact that also in the article, Rome, true to its pelagian conception of sin and grace, speaks of the voluntary reception of the grace of God, and we should bear in mind that, according to Rome, this grace of God can also be rejected. In our following article we will continue with this seventh article and also continue with other articles as adopted by the Roman Catholic Council of Trent. 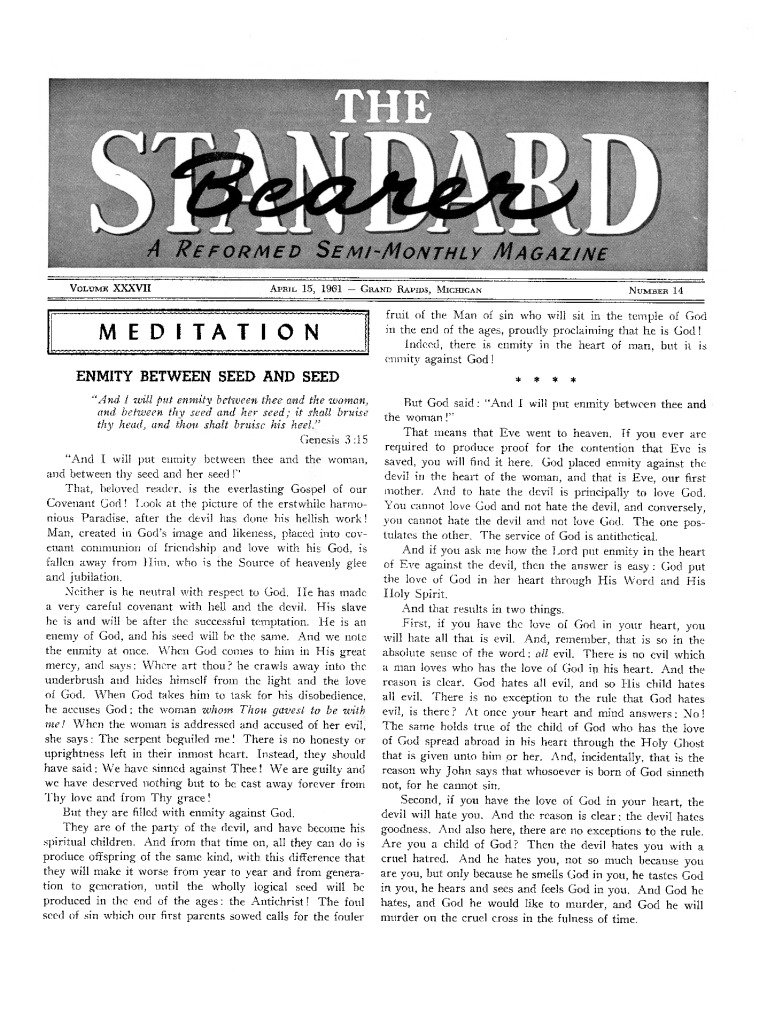