In our preceding article we called attention to the Roman Catholic doctrine of Transubstantiation by quoting from the Council of Trent, and we quoted from that council as it positively set forth that doctrine. Now we will quote the Canons of that council, those articles in which they set forth the errors of those who oppose this doctrine. These articles in which these heresies are set forth are called canons.

CANON I.—If any one saith, that in the mass a true and proper sacrifice is not offered to God; or, that to be offered is nothing else but that Christ is given us to eat: let him be anathema.

CANON II.—If any one saith, that by those words, Do this for the commemoration of me (Luke 22:19), Christ did not institute the apostles priests; or, did not ordain that they and other priests should offer his own body and blood: let him be anathema.

CANON III.—If any one saith, that the sacrifice of the mass is only a sacrifice of praise and of thanksgiving; or, that it is a bare commemoration of the sacrifice consummated on the cross, but not a propitiatory sacrifice; or, that it profits him only who receives; and that it ought not to be offered for the living and the dead for sins, pains, satisfactions, and other necessities: let him be anathema.

CANON IV.—If any one saith, that, by the sacrifice of the mass, a blasphemy is cast upon the most holy sacrifice of Christ consummated on the cross; or, that it is thereby derogated from: let him be anathema.

CANON V.—If any one saith, that it is an imposture to celebrate masses in honor of the saints, and for obtaining their intercession with God, as the Church intends: let him be anathema.

CANON VI.—If any one saith, that the canon of the mass contains errors, and is therefore to be abrogated: let him be anathema.

CANON VII.—If any one saith, that the ceremonies, vestments, and outward signs, which the Catholic Church makes use of in the celebration of masses, are incentives to impiety, rather than offices of piety; let him be anathema.

CANON VIII.—If any one saith, that masses, wherein the priest alone communicates sacramentally, are unlawful, and are, therefore, to be abrogated: let him be anathema.

CANON IX.—If any one saith, that the rite of the Roman Church, according to which a part of the canon and the words of consecration are pronounced in a low tone, is to be condemned; or, that the mass ought to be celebrated in the vulgar tongue only; or, that water ought not to be mixed with the wine that is to be offered in the chalice, for that it is contrary to the institution of Christ: let him be anathema.

In reviewing these articles on the doctrine of the Romish Mass as set forth by the Roman Catholic Church of Trent, we may observe the following.

First, it is evident from these articles (the positive articles which set forth the doctrine as such and also the “Canons” which anathemize those who deny them) that according to the Church of Rome, the Eucharist is a real, propitiatory sacrifice, for the expiation of sins, for reconciliation with God, and for securing providential and gracious blessings from His hands. Rome simply anathemizes those who deny that the mass is a true and proper sacrifice offered to God, or who merely teach that to be offered merely means that Christ is given to us. We understand, of course, that the Protestant and Reformed conception of the Lord’s Supper surely declares that we receive Christ who is bestowed upon His people through the symbols of the bread and wine.

Secondly, that what is offered, in this Romish Eucharist because of the sacrifice which has been performed, is Christ, His body and soul and divinity, all of which are present under the form of bread and wine. The decree of the Council of Trent, concerning the most holy Eucharist, declares in chapter 1 that “In the first place, the holy Synod teaches, and openly and simply professes, that, in the august sacrament of the holy Eucharist, after the consecration of the bread and wine, our Lord Jesus Christ, true God and man, is truly, really, and substantially contained under the species of those sensible things.” The victim, we read in these articles, is one and the same, the same now offering himself on the cross, who then offered himself on the cross, the manner alone of offering being different. The sacrifice of the mass, therefore, is the same as the sacrifice upon the cross; the former is a constant reminder of the latter. The only difference between them is that the sacrifice upon the cross is a bloody sacrifice, whereas the sacrifice in the mass is an unbloody sacrifice. “That same Christ is contained and immolated,” (sacrificed, killed, slain as in a sacrifice—H.V.), we read, “in an unbloody manner who once offered himself in a bloody manner on the altar of the cross; the holy Synod teaches, that this sacrifice is truly propitiatory, and that by means thereof this is effected, that we obtain mercy, and find grace in seasonable aid, if we draw nigh unto God, contrite and penitent, with a sincere heart and upright faith, with fear and reverence.”

Thirdly, as the sacrifice is the same, so also is the priest. Christ offered Himself once on the cross and He offers Himself daily in the mass. According to the Council of Trent, Chapter 1 on the institution of the most holy Sacrifice of the Mass, “He, therefore, our God and Lord, though he was about to offer himself once on the altar of the cross unto God the Father, by means of His death, there to operate an eternal redemption; nevertheless, because that his priesthood was not to be extinguished by his death, in the Last Supper on the night in which he was betrayed . . . . . declaring himself constituted a priest forever, according to the order of Melchisedech, he offered up to Sod the Father his own body and blood under the species of bread and wine; and, under the symbols of those same things, he delivered (his own body and blood) to be received by the apostles whom he then constituted priests of the New Testament; and by those words, Do this in commemoration of me, he commanded them and their successors in the priesthood to offer (them). For, having celebrated the ancient Passover, which the multitude of the children of Israel immolated in the memory of their going out of Egypt, he instituted the new Passover (to wit) himself to be immolated, under visible signs, by the Church through (the ministry) priests.” Of this Hodge writes as follows (Vol. 3, page 687, of his Systematic Theology): “On this statement it may be remarked in passing, that if the ministers are not the real offerers, they are not real priests. A priest is one appointed to offer sacrifices. But according to the theory, the officiating minister in the service of the mass, does not offer the sacrifice. He is a supernumerary (one that is superfluous—H.V.). He has no function. There is no reason why without his intervention, Christ should not when His people meet to commemorate his death, offer Himself anew to God. The Roman theory in this, as in many other points, is not self-consistent. Romanists represent ministers as true priests; mediators between God and the people, without whose intervention no sinner can have access to God or obtain pardon or acceptance. They are not only invested with priestly authority and prerogatives, but imbued with supernatural power. The words of consecration pronounced by other sacerdotal lips, are inoperative. The mass unless performed by a priest is no sacrifice. All this supposes that their office is a reality, that ministers are really priests; but according to the passage just quoted, they are not priests at all. According to the common mode of representation, however, the minister in the mass as truly offers the body and blood of Christ, as the priests under the Old Testament offered the blood of lambs or of goats. Cardinal Gousset, for example, says: “According to the faith of the Catholic Church, the mass is a sacrifice of the new law, in which the priest offers to God the body and blood of Jesus Christ under the form of bread and wine.” The mass is a true sacrifice instituted by Jesus Christ.” “A sacrifice, from its nature, is an act of supreme worship, due to God alone. Hence, when a mass is celebrated in the name of a saint, it is not to be believed that the sacrifice is offered to the saint; but simply in his memory, to implore his protection, and to secure his intercession. It is a sacrifice in which is offered the body and blood of Christ. Jesus Christ, whose body and blood are present under the forms of bread and wine, is Himself the victim. Finally, the Eucharistic sacrifice is made by the hands of the priest, but Jesus Christ is the principal minister; He is at once priest and victim, offering himself to God the Father by the ministry of his priests.”—end of quote from Hodge.

It is, of course, understandable why the Roman Catholic Church should maintain this function of the Romish priesthood in the sacrament of the Eucharist, and particularly in the celebration of the Popish mass. It is very natural for man to appropriate power unto himself. It is flattering to him to be indispensable as he is in the Romish conception of this sacrament. It is true that the priest does not offer the sacrifice, but it is also true that the offering of the sacrifice, who is Christ, is impossible without him. He certainly plays a most important and indispensable role in the celebration of the sacrament.

Fourthly, the Romish mass is propitiatory for the living and also the dead. “Wherefore,” we read in Chapter II, “not only for the sins, punishments, satisfactions, and other necessities of, the faithful, who are living, but also those who are departed in Christ, and who are not as yet fully purified, is it rightly offered, agreeably to a tradition of the apostles.” It has ever been found that men at the approach of death, or the affectionate relatives of the departed, are willing to appropriate money at their command, to pay for masses for their benefit. This has proved to be an inexhaustible mine of wealth to the Church.

Hodge, in his Systematic Theology, Vol. III, pages 688-692, criticizes this Roman Catholic doctrine of the Mass as follows, and we quote: “No doctrine of the Church of Rome is more portentous or more fruitful of evil consequences than this doctrine of the mass; and no doctrine of that Church is more entirely destitute of even a semblance of Scriptural support. The words of Christ, ‘This do in remembrance of me,’ are made to mean, ‘Offer the sacrifice which I myself have just offered.’ These words constituted the Apostles and all their successors priests. The Council of Trent even anathematizes all who do not put that preposterous interpretation on those simple words. Romanists also appeal to the fact that Christ is said to be priest forever after the order of Mekhizedek, from which they infer that He continually repeats the sacrifice once offered on the cross.” We will continue with this quote in our following article. 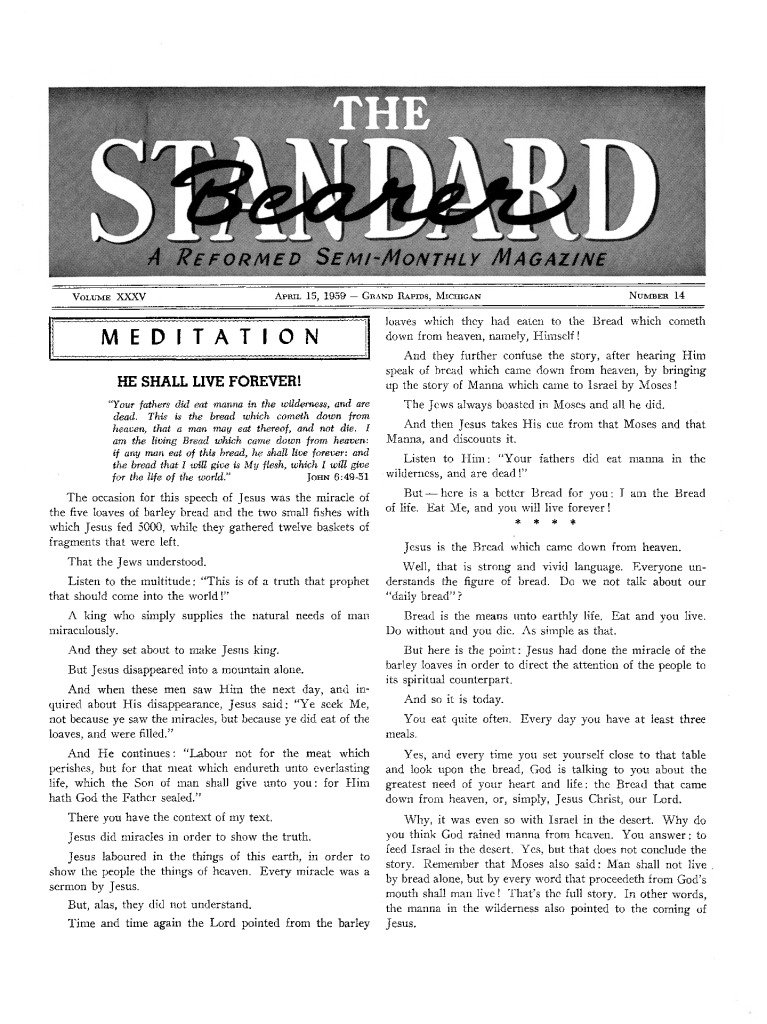