The Church and the Sacraments, Views During the Third Period (750-1517 A.D.), The Seven Sacraments, The Eucharist (continued)

The Church and the Sacraments, Views During the Third Period (750-1517 A.D.), The Seven Sacraments, The Eucharist (continued)

We now continue with the quotation on the views of the Eucharist by Raclbertus by the New Schaff-Herzog Religious Encyclopedia: “This is done by miracle (i. 2), a creative act performed by the word of the Creator; more particularly, through the medium of Christ’s words on institution since he is himself the substantial and eternal Word. The body of Christ is not perceptible by the senses, because that would be superfluous (visibility of the presence of the body) and would not increase the reality, and to eat the flesh in its sensible appearance would clash with human custom (xi. 1); because such reception would seem repulsive and. ridiculous to heathen and unbelievers (xiii. i sqq.); but mostly because the operation would no longer be a mystery but a pure miracle, whereas the former by concealing the content does not originate but excites faith so that this is preserved and its meritorious service is enhanced (xiii. 1 sqq., i. 5): Though upon consecration the bread and wine are only such in appearance, yet not all symbols are merely appearances, and these as symbols cover the real presence as content.

“The explanation of Radbert’s position in holding at once such opposite views (his view on Transubstantiation and the view of Augustine—H.V.) is found in his attachment to the literal authority of the Scriptures. Christ’s words, ‘This is my body,’ are to be taken in the crassest literalness. Christ has only one body and if another body be offered in the sacrament than the crucified one, another blood than what was shed, then its partaking could not effect the forgiveness of sins. The historical body is the indispensable basis of the sacramental body, howsoever spiritual the sacramental mystery. Moreover, Christ abides in the believer by the unity of. his flesh and blood which must be sustained by the real presence in the sacrament. These two disparate views of the patristic (of the fathers, H.V.) tradition Radbertus approximated but never successfully fused. This remained for the strenuous efforts of the later centuries, as evidenced in the following elements of the resulting dogma: (1) The body of Christ is not created but becomes present in the consecration though without extension in space; (2) the relation of the presence to the sensible properties is posited under the categories of substance and accidents (the word ‘accident’ here refers to any non-essential circumstance or attribute—H.V.); and (3) the elements are symbols of the presence and the sacramental body is symbol of the mystical body, the sustenance of both in one constituting the blessing. Two of his contemporaries opposed the view of Radbert, namely, Rabanus Maurus and Ratramnus; both off whom were Augustinian. The former took offense at the transformation of the elements into the historical body of Christ, denying that the mystery identified the sacramental with the historical body. A great many followed along the lines marked out by Radbert, among whom, of the ninth century, were Florus Magister, subdeacon of Reims, Hinemar of Reims, Remigius, and Pseudo-Alcuin.”—end of quote.

Radbertus, therefore, taught that by the words of consecration the bread and the wine are changed into the body and blood of Christ, although these remain concealed under the qualities of bread and wine as to the senses. He taught that in the consecration thesensible properties remain unchanged. Mind you, he speaks of the sensible properties as being unchanged. However, the substance of the bread and wine within are efficaciously changed into the real body and blood of Christ.

Radbertus was opposed in his view of the Eucharist and of Transubstantiation by most of his contemporaries. He himself had been involved in a violent dispute with another monk, Ratramn. Radbertus had started from the omnipotence of God, to whom all things are possible, and maintained the miraculous change of the elements of bread and wine. He had looked upon the elements as no more than a veil which deceives our senses and keeps the body of Christ concealed from us. He was opposed by Ratramn. Ratramn properly distinguished between the signs and the thing represented by them, the internal and external, and pointed out the true significance of themysteries, which consists in this, that through their medium the mind of man rises from the visible to the invisible. If it were possible to eat the body of Christ, in the proper sense of the word, faith would no longer be required, and the mystery, as such, would lose all its significance. The gross reality would destroy the idea, and nothing but a mere materialism-would remain. Ratramn also supposed a conversion of the bread and wine into the body of Christ, but only in the ideal sense of the word. However, the doctrine of Transubstantiation gained the ascendancy during these medieval ages. In the eleventh century this doctrine and view as taught by Radbertus was denied by a certain Berengar, Canon of Tours, and afterwards Archdeacon at Angers. Berengar combated principally the doctrine of an entire change in such a manner as to make the bread cease to be bread, and to have nothing left but the accidents. In accordance with the earlier fathers, he retained the doctrine of a change from an inferior to a superior form, and of a mystical participation in the body of Christ under’ the figure of bread.

Berengar was violently opposed by four opponents, who are recognized as practically the authors of the doctrine of Transubstantiation. Two of these opponents were Lanfranc and Guitmund. Lanfranc was the first to teach that the body of Christ is received also by the unworthy, a view essentially implying the reality of the change of the bread. This lies in the nature of the case. If the elements of the bread and wine are actually changed into the body and blood of Christ, then it surely makes no difference whether a believer or an unbeliever receives them. More important than the word of Lanfranc was the work of Guitmund. In this work the view was set forth that “in the sacrament, the substance, not the form, being changed, the bread and wine do not become new flesh and new blood, but the existing body of Christ that, nevertheless, each separate particle is the whole body of Christ.” In this latter statement are contained four axioms of subsequent theologians: “(1) not a part of the body of Christ (as the flesh). but the whole body, the whole Christ, is present in the Eucharist in virtue of the change; (2) the whole body, the whole Christ, is not only in the entire host, but no less entirely in each part; (3) even though a thousand masses are celebrated simultaneously at different places, the whole body of Christ is present in each individually and entirely in all; (4) by the breaking of the host and its crushing by the teeth the indivisible body of Christ is not divided.” Anselm denied that with the blood only the soul of Christ is received and with the body only the body, but maintained that the entire Christ, both God and man, is received in each. Henceforth it was a standing formula that “the entire Christ exists and is received under each species,” and though the conception of the Eucharist as spiritual sustenance-prevailed later, yet the argument was repeatedly recalled. Guitmund also made an advance in a closer determination of the process in the sacrament. We must remember that, according to this doctrine of Transubstantiation, one thing becomes another that already exists. When the bread and wine are changed into the body and blood of Christ, the body and blood of Christ do not come into being. They are already in existence. Hence, the bread and wine are changed into something which already exists. It was stated that this change did not occur by flight from heaven through space, but that the human nature of Christ, now exalted, was capable by virtue of omnipotence to remain undivided and substantial where it is, and at the same time to be at every other place where it will. However, the doctrine of Transubstantiation had been so generally adopted as the orthodox doctrine, that Berengar, who ventured to express doubts concerning its correctness, was condemned, and obliged by several synods to retract. And he would have suffered still more if Pope Gregory VII had not at last succeeded in protecting him against the rage of his enemies. Berengar did not take offence at the use of the phrase, “to partake of the body and blood of Christ,” but he explained it in a more or less ideal manner.

It was Hildebert of Tours who was the first to make use of the full-sounding term “transubstantiatio,” though similar expressions, such as transition, had previously been employed.

Most of the earlier scholastics and the disciples of Lanfranc in particular, had defended the doctrine of the change of the .bread into the body of Christ, and the doctrine of the Accidentia sine subjecto; these were now solemnly confirmed or made an unchangeable article of faith by Pope Innocent III. Innocent fixed this doctrine as a dogma at the Fourth Lateran Council in 1215. This decree reads as follows: “There is verily one universal Church of the faithful, outside of which no one at all is saved, in which the same priest is himself the sacrifice, Jesus Christ, whose body and blood are truly contained in the sacrament of the altar under the .species of bread and wine, the bread being transubstantiated into the body, and the wine into the blood, by divine power.”

So, the doctrine was now officially established. And nothing was left to the later scholastics, but to answer still more subtle questions, such as: “In what respect can it be said that the body of Christ is actually broken together with the bread? Do animals partake of the body of Christ, when they happen to swallow a consecrated host? Is the bread used in the Lord’s Supper changed only in the flesh of our Lord, or also into His body and soul, or into His divinity itself, or even into the Holy Trinity? Does the change take place gradually, or suddenly? Is there only one body in the multitude of hosts, so that the same Christ is sacrificed at the same time: upon all altars, which constitutes the mystery of the mass?”

The Doctrine of Concomitance

The word “concomitance” means literally: existing or occupying together. The Roman Catholic doctrine of Concomitance refers to the practice in that Church which withholds the cup in the sacrament of the Eucharist from the laity.

The Roman Catholic Church admits that this custom of withholding the cup from the laity is contrary to the original institution of the ordinance, and to the usage of the early Church. But, it is defended, first of all, on the ground that the cup is unnecessary to the completeness of the sacrament. The blood is in the body; he therefore who receives the latter receives the former. And, as the whole Christ, as to His body and soul and divinity is not only in each species, but in every particle of both; he who receives the consecrated bread receives the whole Christ and derives all the benefit which the sacrament is capable of affording. And, secondly, this practice is defended on the ground that there is great danger in passing the cup from one communicant to another, that a portion of its contents should be spilt; and as the cup after consecration contains the real blood of Christ, its falling to the ground and being trodden under foot is a profanation which should by all means be avoided.” 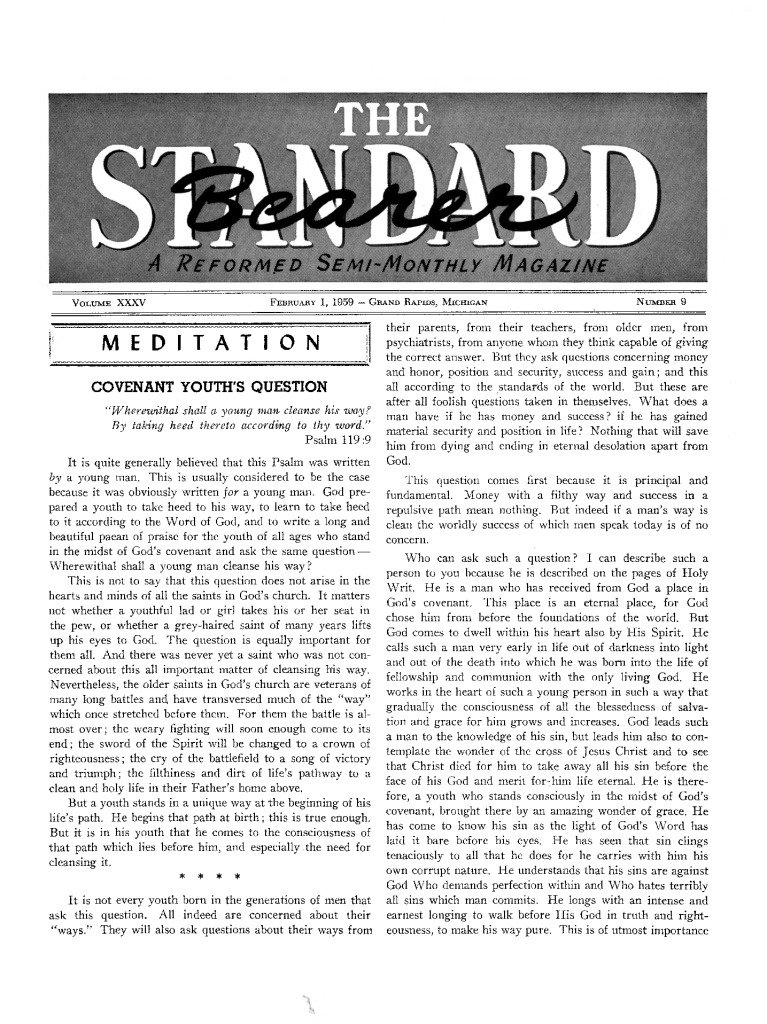