Confirmation, or a service attending the introduction of those baptized in infancy into full communion in the Church, was instituted early and continued for a long time among Protestants as well as among the Romanists. In fact, the word “Confirmation” had lately also come into existence among our churches recently. Those who had been baptized in their infancy had their standing then in the Church on the ground of the profession of faith and the engagements which had been made in their name, by their parents or sponsors. When these children had come to years of discretion they were examined as to their knowledge and conduct, and if it was apparent that they had been competently instructed and no charge could be lodged against their conduct, they assumed the obligations of their baptismal vows upon themselves, and their church membership was confirmed. However, we do well to remember that there was no sacramental character attached to this procedure whatsoever. And, if this were the meaning of Confirmation today, there would be no objection to the continued use of the term. However, Rome has exalted this simple service to the rank of a sacrament. And, in the light of this development one may surely question the propriety of continuing the use of the term.

Rome, we repeat, has elevated the service of confirmation to a sacrament. The gift or grace which is conferred by this sacrament is that supernatural influence of the Holy Spirit, which enables the recipient to be faithful to his baptismal vows. The administration of the sacrament must be a prelate as prelates only are the official successors of the Apostles, and, therefore, they only have the power of conveying the Holy Spirit by the imposition of hands, which was one of the prerogatives of the apostles.

However, let us listen to what Rome itself has to say about this sacrament. The Council of Trent discussed and declared itself on the seven sacraments exhaustively. Its decisions on the sacrament of Confirmation are very brief. The Romish doctrine relative this sacrament is contained in three canons or anathemas as follows:

CANON I.—”If any one saith, that the confirmation of those who have been baptized is an idle ceremony, and not rather a true and proper sacrament; or that of old it was nothing more than a kind of catechism, whereby they who were near adolescence gave an account of their faith in the face of the Church: let him be anathema.”

CANON II.—”If any one saith, that they who ascribe any virtue to the sacred chrism of confirmation, offer an outrage to the Holy Ghost: let him be anathema.”

CANON III.—”If any one saith, that the ordinary minister of holy confirmation is not the bishop alone, but any simply priest soever: let him be anathema.” It is evident from the statements of the Council of Trent that one of the objections against this “sacrament of confirmation” was that it was an outrage against the Holy Ghost. Why this objection should be lodged against the practice of the Roman Catholic Church should be evident from what we read in the “Larger Catechism of the Eastern Church” which is of interest in connection with this sacrament. This “Larger Catechism” is considered the most authoritative doctrinal standard of the orthodox Graeco-Russian Church. We understand that there is no principal difference between the corruption of the Confirmation as presented in this catechism and the view of Roman Catholicism. What we have in this Catechism is presented in the form of questions and answers. The subject above these particular questions and answers is: On Unction with Chrism. The word “Chrism” also appears in the Canons of the Council of Trent, more particularly in Canon II. This word refers to an unguent of oil and balm used for anointing, ordination, etc., in the Greek orthodox and the Roman Catholic Churches, and refers therefore to that with which one is anointed. We now quote as follows from pages 494- 495 of Volume II of Schaff’s Creeds of Christendom:

ON UNCTION WITH CHRISM

308. Is this, Sacrament mentioned in holy Scriptures? The inward grace of this Sacrament is spoken of by the Apostle John, as follows: But ye have an unction from the Holy Ghost, and ye know all things. And the anointing which ye have received of him abideth in you, and ye need not that any man teach you; but as the same anointing teacheth you of all things, and is truth, and is no lie; and even as it hath taught you, abide therein. I John 2:20, 27.

In like manner the Apostle Paul also says: Now he which established us with you is Christ, and hath anointed us, is God; who bath also sealed us, and given the earnest of the Spirit in our hearts. II Cor. 1:21, 22.

Hence are taken the words pronounced at the Unction:The seal of the gift of the Holy Ghost.

309. Is the outward form of Unction with Chrism mentioned in holy Scripture?

It may well be supposed that the words of St. John refer to a visible as well as to an inward unction; but it is more certain that the Apostles, for imparting to the baptized the gifts of the Holy Ghost, used imposition of hands. Acts 8:14, 16. The successors of the Apostles, however, in place of this, introduced unction with chrism, drawing, it may be, their precedent from the unction used in the Old Testament. Exod. 30:25; 1 (3 in the Greek) Kings 1:39. (Dion. Areop. de Eccl. Hier. cap. IV.)

310. What is to be remarked of the holy Chrism? This: that its consecration is reserved to the heads of the Hierarchy, as successors of the Apostles, who used the laying on of their own hands to communicate the gifts of the Holy Ghost.

311. What is especially signified by anointing the forehead?

The sanctification of the mind, or thoughts.

The sanctification of the heart, or desires.

The sanctification of the senses.

314. What by anointing the hands and feet?

The sanctification of the words and whole walk of the Christian.—end of quote from Schaff’s Creeds of Christendom.

Is it any wonder that an objection lodged against this Romish sacrament of confirmation is that it is an outrage against the Holy Ghost? Must the operation of the Holy Spirit, confirming and strengthening the child of God in the faith, be limited and bound to these outward ceremonies and to the hierarchy (the priesthood) of the church? Notice again how the hierarchy, the priestly office plays a vital role in the salvation of the people of God. The priest is simply indispensable throughout.

Confirmation is a rite which in the Roman Catholic and Greek churches is considered a sacrament conveying strength for the Christian warfare and completing the gift of the Holy Ghost bestowed in baptism, and by which in the Anglican and Lutheran churches baptized persons are received into full communion. At an early period in the primitive Church baptism was accompanied with unction (Tertullian, De baptismo, VII.; Cyril, “Mystagogic Lectures,” III. 2-6), with which theologians associated communication of the, Spirit. A second rite connected with baptism was the laying on of hands (Acts 8:17, 19:6). Unction and laying on of hands became later separate ceremonies, performed by the bishop; but since baptism remained associated with unction, there were two anointings, one at baptism and a second performed by the bishop; From the latter ceremony developed confirmation. According to medieval doctrine this took the place of the laying on of hands (Decrees of the Council of Florence, 1439). The historical development of the rite culminates in the bullExultate of Eugenius (1432-47); the material is an unguent of oil and balsam; the formula, “I seal thee with the sign of the cross and confirm thee with the oil of salvation in the name of the Father, Son, and Holy Ghost” (the form employed in the Greek Church is: “the seal of the gift of the Holy Spirit” is imparted to thee); the ordinary minister is the bishop; the effect is the giving of the Holy Ghost with strength boldly to confess Christ. The alapa, i.e., the practice of giving the candidate a blow on the cheek is not mentioned in this bull, though already customary (William Durand,Ra.tionale divinorum officiorum, VI. 84).

In the Middle Ages opposition to confirmation had been aroused by Wyclif and the Bohemians, and the latter replaced it by a rite which is to be regarded as the prototype of Evangelical confirmation (W. Caspari, Konfirmation, Leipsic, 1890, pp. 168-171). The Reformers also decisively pronounced against it. The fact that infant baptism was retained; the consequent Anabaptist objections that in this way, contrary to the baptismal command of the Lord, baptism became anterior to teaching; the ignorance of the congregations in the main articles of Christianity; the fear that on this account the Eucharist might be received by the unworthy; and, above all, solicitude for the flock imposed on the Reformers the duty of promoting Christian instruction through catechizing. Admission to communion was made contingent upon an examination in the chief truths of the Christian religion. As early as 1534 Butzer (in Ad monasterienses) taught that baptized children after antecedent Christian instruction might make public profession, and that the ancient usage from which confirmation had arisen might be renewed, namely, that the bishops should lay hands on the baptized and thereby “literally” impart to them the Holy Ghost. The section “Confirmatio” of the Wittenberg Reformationof 1545 (CR, V. 579) expressed itself in similar terms. We will stop at this point. The Lord willing, we will finish this quotation from the New Schaff-Herzog Religious Encyclopedia on this sacrament of Confirmation in our following article. 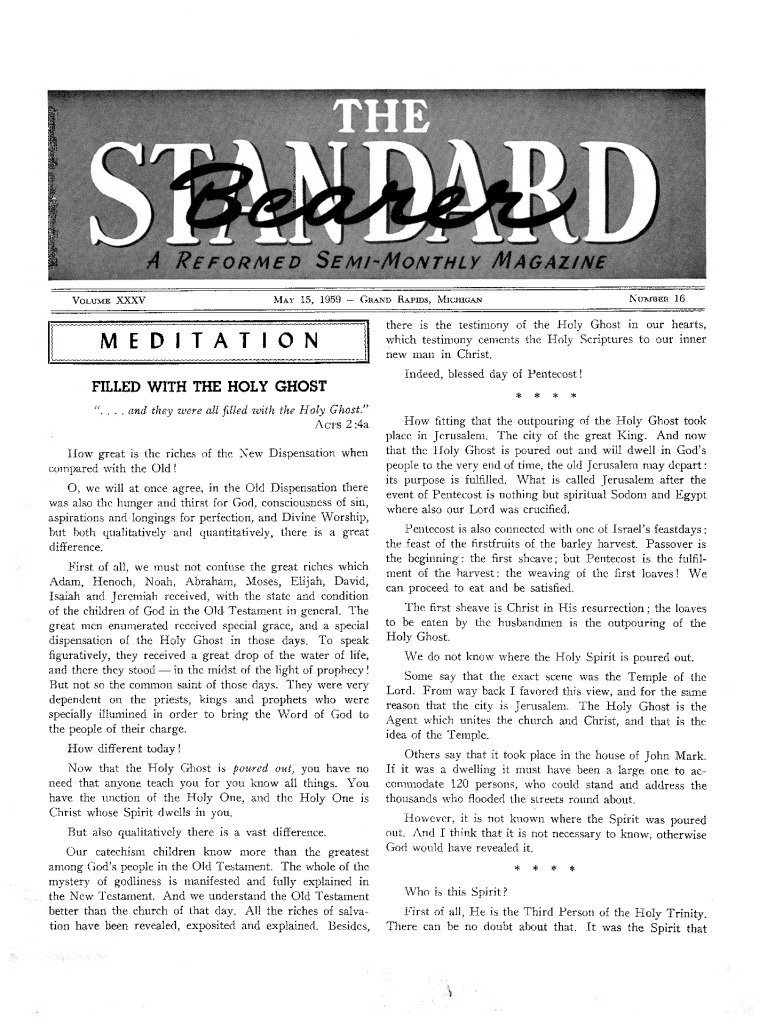