“Thus, neither is our own justice established as our own as from ourselves; nor is the justice of God ignored or repudiated: for that justice which is called ours, because that we are justified from its being inherent in us, that same is (the justice) of God, because that it is infused into us of God, through the merit of Christ. Neither is this to be omitted,—that although, in the sacred writings, so much is attributed to good works, that Christ promises, that even he that shall give a. drink of cold water to one of his least ones, shall not lose his reward; and the Apostle testifies that, That which is at present momentary and light of our tribulation, worketh for us above measure exceedingly an eternal weight of glory; nevertheless God forbid that a Christian should either trust or glory in himself, and not in the Lord, whose bounty towards all men is so great, that he will have the things which are his own gifts be their merits. And forasmuch as in many things we all offend, each one ought to have before his eyes, as well the severity and judgment, as the mercy and goodness (of God); neither ought any one to judge himself, even though he be not conscious to himself of any thing; because the whole life of man is to be examined and judged, not by the judgment of man, but of God, who will bring to light the hidden things of darkness, and will make manifest the counsel of the hearts; and then shall every man have praise from God, who, as it is written, will render to every man according to his works. After this Catholic doctrine on Justification, which whoso receiveth not faithfully and firmly can not be justified, it hath seemed good to the holy Synod to subjoin these canons, that all may know not only what they ought to hold and follow, but also what to avoid and shun.”—end of quote. It cannot escape the attention of the reader of these lines how all stress and emphasis is laid upon the works of man. And this grace -of God, we must remember, is bestowed upon man through the external operation of the sacraments, particularly the sacraments of baptism and the Lord’s Supper. And it surely must be evident that this grace of God is almost entirely divorced and separated from the guilt of sin and its forgiveness.

Thirdly, this doctrine of the seven sacraments is a deviation from the teachings of Holy Writ because, according to Rome, faith is no requirement whatever for the receiving of the sacrament. The grace of God lies as a sanctifying grace, as something material, in the sacrament itself, is imparted by an external operation of the sacrament, and merely presupposes, at the very most, that the adults, to receive the sacrament, must not positively oppose it by absolute infidelity or resistance of the will. The sacrament works physically and magically, and by a power of God which He has imparted to the priest as an instrument in his hand. The Council of Trent declared, in Canon VIII of its Seventh Session, and we quote: “If any one saith that by the said sacraments of the New Law grace is not conferred through the act performed, but that faith alone in the divine promise suffices for the obtaining of grace: let him be anathema.” The faith which is necessary on the part of adults is merely historical faith, an acceptance of what the Church has set forth (and, incidentally, there is so much of this also in our present day), but the efficacy of the sacrament lies in the sacrament itself and is imparted to the recipient through its outward administration. And this they declare in spite of the clear Word of God as recorded in Romans 3:25-31, and we quote: “Whom God hath set forth to be a propitiation through faith in his blood, to declare his righteousness for the remission of sins that are past, through the forbearance of God; To declare, I say, at this time his righteousness: that he might be just, and the justifier of him which believeth in Jesus. Where is boasting then? It is excluded. By what law? of works? Nay: but by the law of faith. Therefore we conclude that a man is justified by faith without the deeds of the law. Is he the God of the Jews only? is he not also of the Gentiles? Yes, of the Gentiles also: Seeing it is of one God,’ which shall justify the circumcision by faith, and uncircumcision through faith. Do we then make void the law through faith? God forbid: yea, we establish the law.” This view of the sacraments, as we shall see later, was uniformly rejected by the Reformers. But, as of now, we are discussing the sacraments as they constituted the teaching of the Church in the years A. D. 750-1517.

Treating these seven sacraments somewhat in detail, we call attention, first of all, to the sacrament of baptism as it was taught during these Middle Ages, and therefore by the Roman Catholic Church. We have already, in past articles, called attention to the fact that Baptism was held in high esteem during the early centuries of the Church of God in the New Dispensation. It was not merely considered a rite, a ceremony, but as a sacrament it was considered efficacious. Baptism was to the first teachers of the Church of the New Dispensation not merely a significant symbol, representing to the senses the internal consecration and renewal of the soul, but an efficacious medium for conveying objectively to believers the blessing of the gospel, and especially the benefits of the sacrificial death of Christ.

Rome identifies regeneration with the sacrament of baptism. Writing on the efficacy of baptism and the Romish and Ritualistic doctrine as to the efficacy of baptism, Hodge, in his Outlines of Theology, page 625, writes as follows: “The Romish doctrine, with which the ‘Tractarian’ doctrine essentially agrees, is, 1st, that baptism confers the merits of Christ and the power of the Holy Ghost, and therefore (1) it cleanses from inherent corruption; (2) it secures the remission of the penalty of sin; (3) it secures the infusion of sanctifying grace; (4) it unites to Christ; (5) it impresses upon the soul an indelible character; (6) it opens the portals of heaven. Pt. II, Chap. ii., Q. 32-44. 2nd. That the efficacy of the ordinance is inherent in itself in virtue of the divine institution. Its virtue does not depend either on the merit of the officiating minister, nor on that of the recipient, but in the sacramental action itself as an opus operatum. In the case of infants, the only condition of its efficiency is the right administration of the ordinance. In the case of adults its efficiency depends upon the additional condition that the recipient is not in mortal sin, and does not resist by an opposing will.—Dens ‘De Baptismo,’ N. 29.”—end of quote.

Dr. Bavinck, in his Dogmatics, writes as follows, III, 442-444, and we translate: “The Romish doctrine comes therefore down to this: the children who are born in the church receive in baptism regeneration (justification, infused grace), but they, who in later years hear the gospel, receive the grace sufficient, which consists in an enlightening of the mind and a strengthening of the will by the Holy Spirit. Man can reject this grace but he can also acquiesce. If he acquiesces, then the gratia excitans becomes cooperating grace; man works or cooperates with it to prepare himself for the justification (infused grace,habitualis). This preparation embraces seven moments, that man, helped by the grace of God, believes in the Word of God, begins to see that he is a sinner, receives hope in God’s mercy, begins to love Him, begins to hate sin, decides to permit himself to be baptized and to lead a new life, Trid. VI c. 6. Faith does not occupy a central place here, but is coordinated with the six other preparations unto justifying grace; it is therefore nothing else than an agreement with the doctrine of Christendom, that is, of the doctrine of the church and it receives its justifying power first through the love, which is imparted when the grace of God is infused; in itself and taken by itself, it cannot justify, but it is called justifying faith inasmuch as it is the first of the above named preparations. If man has thus prepared himself and has done what he can . . . . , then God cannot refuse him the infused grace. It is true that man has not earned this grace through that preparation, inasmuch as it far exceeds it in value and worth; but it is reasonable and fair that God reward him who does his best with the infused grace, This is given him in baptism and it consists in the indwelling of the Holy Spirit, the infusing of supernatural virtues, the communion with the Divine nature, and it is followed by the forgiveness of sins which constitutes with it the two parts of justification, Thomas, S. Theol. II 1 qu. 113. The forgiveness of sins, according to Rome, is therefore the negative side of the positive renewing of man; sin is forgiven because and inasfar as it is blotted out. When man now becomes a partaker of this infused grace in baptism, then he is indeed able to lose the same through mortal sins, and he must do penance for other sins, not only with contrition but also with confession and works of satisfaction; but he does possess in the infused grace the supernatural power to perform good works and thereby is able to merit all future grace, yea even everlasting life. For the good works which he does flow forth out of a supernatural principle and are therefore worthy of a supernatural reward. And from this we can clearly understand just what the purpose is of Rome in connection with this doctrine of grace.” But, the Lord willing, we will continue with this quotation of Dr. Bavinck in our following article. 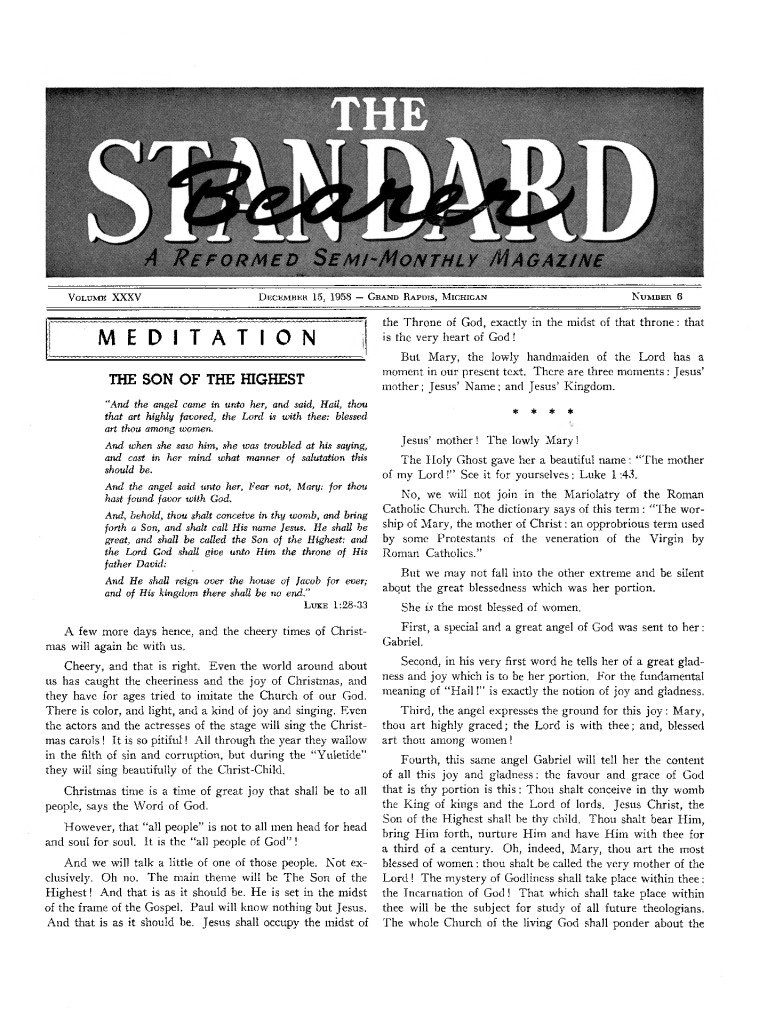