The Church and the Sacraments, The Time of the Reformation, Views on the Church, Material Principle, Chapter XVI (continued)

The Church and the Sacraments, The Time of the Reformation, Views on the Church, Material Principle, Chapter XVI (continued)

On The Fruit Of Justificat1ion, That Is, On The Merit Of Good Works, And On The Nature Of That Merit

Continuing with our quotations from the Sixth Session of the Roman Catholic Council of Trent, devoted to the subject of Justification, we now quote the sixteenth chapter: “Before men, therefore, who have been justified in this manner—whether they have preserved uninterruptedly the grace received, or whether they have recovered it when lost—are to be set the words of the Apostle: Abound in every good work, knowing that your labor is not in vain in the Lord; for God is not unjust, that He should forget your work, and the love which you have shown in His name; and, do not lose your confidence, which hath a great reward. And, for this cause, life eternal is to be proposed to those working well unto the end, and hoping in God, both as a grace mercifully promised to the sons of God through Jesus Christ, and as a reward. which is according to the promise of God Himself, to be faithfully rendered to their good works and merits. For this is that crown of justice which the Apostle declared was, after his fightand course, laid up for him, to be rendered to him by the just Judge, and not only to him, but also to all that love his coming. For, whereas Jesus Christ himself continually infuses his virtue into the said justified—as the head into the members, and the vine into the branches—and this virtue always precedes and accompanies and follows their good works, which without it could not in any wise be pleasing and meritorious before God—we must believe that nothing further is wanting to the justified, to prevent their being accounted to have, by those very works which have been done in God, fully satisfied the divine law according to the state of this life, to be obtained also in its (due) time, if so be, however, that they depart in grace: seeing that Christ, our Savior, saith: If any one shall drink of the water that I will give him, he shall not thirst forever; but it shall become in him a fountain of water springing up unto life everlasting. Thus, neither is our own justice established as our own as from ourselves; nor is the justice of God ignored or repudiated: for that justice which is called ours, because that we are justified from its being inherent in us, that same is (the justice) of God, because that it is infused into us of God, through the merit of Christ. Neither is this to be omitted—that although, in the sacred writings, so much is attributed to good works, that Christ promises, that even he that shall give a drink of cold water to one of his least ones, shall not lose his reward; and the Apostle testifies, That which is at present momentary and light of our tribulation, worketh for us above measure exceedingly an eternal weight of glory; nevertheless God forbid that a Christian should either trust or glory in himself, and not in the Lord, whose bounty towards all men is so great, that he will have the things which are his own gifts be their merits. And forasmuch as in many things we all off end, each one ought to have before his eyes, as well the severity and judgment, as the mercy and goodness (of God); neither ought any one to judge himself, even though he be not conscious to himself of anything; because the whole life of man is to be examined and judged, not by the judgment of man, but of God, who will bring to light the hidden things of darkness, and will make manifest the counsels of the hearts, and then shall every man have praise from God, who, as it is written, will render to every man according to his works.”

In this sixteenth article, the Romish Church emphasizes the good works which the Christian is called to perform in the midst of the world, that he must fight the good fight, etc., declaring of the apostle that he receive the crown of justice AFTER his fight and course have been completed in the midst of this world. To this, of course, there can be no objection as such. It is certainly true that the child of God must perform good works, and that he must fight even unto the end. Of this the Scriptures testify abundantly. But it is quite another thing to say that our good works are meritorious, that the Lord’s bounty towards all men is so great, that He will have the things which are His own be their merits.

Of interest in this connection are also the Canons which the Romish Council adopted at this same Council of Trent. We are now primarily interested in the Romish doctrine that our justification is also by works. Indeed, the Romish Church is also pelagian in its conception of the grace of God and the free will of man. This, too, is evident in these canons, articles in which the Romish Church anathemizes all those who do not agree with its doctrine. For example, we read in Canon III: “If any one saith, that without the prevenient (“prevenient” means: that which precedes, goes before—H.V.) inspiration of the Holy Ghost and without his help, man can believe, hope, love, or be penitent as he ought, so that the grace of Justification may be bestowed upon him: let him be anathema.” Notice, please, that the Romish Church in this article speaks of the help of the Holy Spirit. And that the Romish Church defends the doctrine of the free will of the sinner, is evident from Canon IV: “If any one saith, that man’s free will moved and excited by God, by assenting to God exciting and calling, nowise cooperates towards disposing and preparing itself for obtaining the grace of Justification; that it can not refuse its consent, if it would, but that; as something inanimate, it does nothing whatever and is merely passive: let him be anathema.” Of course, we do not believe that the sinner is inanimate, merely passive. We do not believe that the sinner is a stock and block. But in the article just quoted the Romish Church states very emphatically that the sinner can also refuse the consent to the grace of Justification, and this Church strongly advocates the position of the free will of the sinner. However, at present we are primarily interested in the Romish position that man’s justification is also by works. And we will now proceed to quote several of the canons of the Council of Trent.

Canon IX: “If any one saith, that by faith alone the impious is justified, in such wise as to mean, that nothing else is required to cooperate in order to the obtaining the grace of Justification, and that it is not in any way necessary, that he be prepared and disposed by the movement of his own will: let him be anathema.”

Canon XI: “If any one saith, that men are justified, either by the sole imputation of the justice of Christ, or by the sole remission of sins, to the exclusion of the grace and the charity which is poured forth in their hearts by the Holy Ghost, and is inherent in them; or even that the grace, whereby we are justified, is only the favor of God: let him be anathema.” In this canon it is evident that the Romish Church confuses justification with sanctification. And the Romish Church declares in this canon that it is not true that man is justified solely by the imputation of the justice of God, and that it is also untrue that he is justified solely by the favor of God.

Canons XIII-XV: “If any one saith, that it is necessary for every one, for the obtaining the remission of sins, that be believe for certain, and without any wavering arising from his own infirmity and indisposition, that his sins are forgiven him: let him be anathema . . . If any one saith that man is truly absolved from his sins and justified, because that he assuredly believed himself absolved and justified; or, that no one is truly justified but he who believes himself justified; and that, by this faith alone, absolution and justification are effected: let him be anathema.” In this fourteenth canon the Romish Church denies that a man can be completely sure of his justification in this life. And in Canon XV we read: “If any one saith, that a man, who is born again and justified, is bound of faith to believe that he is assuredly in the number of the predestinate: let him be anathema.” In this canon this church denies that a child of God can have the assurance of his election. In this that church clearly opposes the admonition of the apostle Peter when he admonishes the Church of God to make its calling and election sure.

Canon XVII: “If any one saith, that the grace of Justification is only attained to by those who are predestined unto life; but that all others who are called, are called indeed, but receive not grace, as being, by the divine power, predestined unto evil: let him be anathema.” This is a most interesting canon. Here the Romish Church maintains that not only the elect of God receive God’s grace, anathemizes all those who declare that the reprobate (those who are predestined unto evil) do not receive grace. We must understand in this connection that the Romish Church, when speaking of those who, are predestined unto evil, does not in these words give expression to its own doctrine. That Church denies the truth of Reprobation. But it is surely true that the Christian Reformed Church, and other churches, who maintain that also the reprobates receive grace, here finds itself in the company of the Roman Catholic Church.

Canon XXI: “If any one saith, that Christ Jesus was given of God to men, as a redeemer in whom to trust, and not also as a legislator whom to obey: let him be anathema.” This is surely an ambiguous article. The Protestant Church surely does not deny that we must also do the commandments of our Lord Jesus Christ. Again and again our Lord admonishes to keep His commandments. But we must bear in mind that the Romish Church would advocate the position that our doing of these commandments is meritorious, that our obeying of these precepts merits in the sight of God. And in this canon this Church anathemizes all those who would maintain that Jesus Christ was given us of God only as a redeemer and not also as a legislator who gives us His precepts that we may walk in them and thereby merit justification in the sight of God. 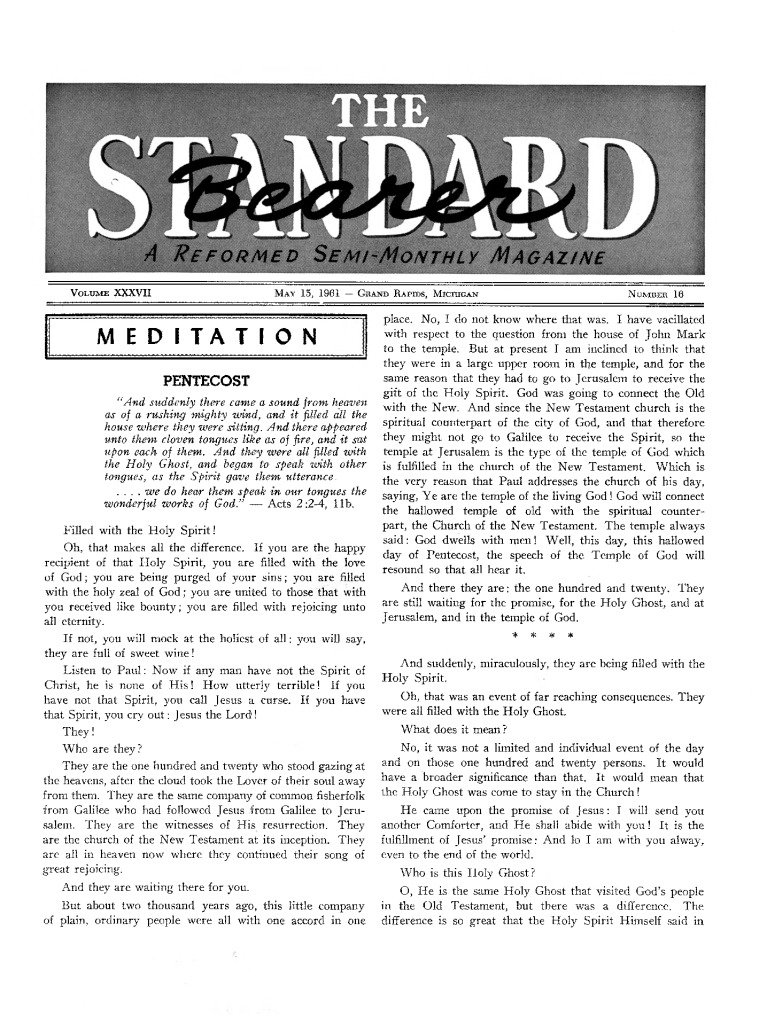