The Reformation was a protest against human authority, asserted the right of private conscience and judgment, and roused a spirit of criticism and free inquiry in all departments of knowledge. It allows, therefore, a much wider scope for the exercise of reason in religion than the Roman church, which requires unconditional submission to her infallible authority. It marks a real progress, but this progress is perfectly consistent with a belief in revelation on subjects which lie beyond the boundary of time and sense. What do we know of the creation, and the world of the future, except what God has chosen to reveal to us? Human reason can prove the possibility and probability of the existence of God and the immortality of the soul, but not the certainty and necessity. It is reasonable, therefore, to believe in the supernatural on divine testimony, and it is unreasonable to reject it.

The Reformers used their reason and judgment very freely in their contest with church authority. Luther refused to recant in the crisis at Worms, unless convinced by testimonies of the Scriptures and “cogent arguments.” For a while he was disposed to avail himself of the humanistic movement which was skeptical and rationalistic in its tendency, but his strong religious nature always retained the mastery. He felt as keenly as any modern Rationalist, the conflict between natural reason and the transcending mysteries of revelation. He was often tormented by doubts and even temptations to blasphemy, especially when suffering from physical infirmity. A comforter of others, he needed comfort himself and asked the prayers of friends to fortify him against the assaults of the evil spirit, with whom he had, as he thought, many a personal encounter. He confessed, in 1524, how glad he would have been five years before in his war with papal superstition, if Carlstadt could have convinced him that the Eucharist was nothing but bread and wine, and how strongly he was then inclined to that rationalistic view which would have given a death blow to transubstantiation and the mass. He felt that every article of his creed—the trinity in unity, the incarnation, the transmission of Adam’s sin, the atonement by the blood of Christ, baptismal regeneration, the real presence, the renewal of the Holy Spirit, the resurrection of the body—transcended human comprehension. In August 2, 1527, during the raging of the pestilence at Wittenberg, he wrote to Melanchton, who was absent at Jena: “For more than a week I have been tossed about in death and hell; so that, hurt in all my body, I still tremble in every limb. For having almost lost Christ, I was driven about by storms and tempests of despair and blasphemy against God. But God, moved by the prayers of the saints, begins to have pity upon me, and has drawn my soul out of the lowest hell. Do not cease to pray for me, as I do for you. I believe that this agony of mine pertains to others also.”

In such trials and temptations he clung all the more mightily to the Scriptures and to faith which believes against reason and hopes against hope. “It is a quality of faith,” he says in the explanation of his favorite Epistle to the Galatians, “that it wrings the neck of reason and strangles the beast, which else the whole world, with all creatures, could not strangle. But how? It holds to God’s Word, and lets it be right and true, no matter how foolish and impossible it sounds. So did Abraham take his reason captive and slay it, inasmuch as he believed God’s Word, wherein was promised him that from his unfruitful and as it were dead wife, Sarah, God would give him seed.”

This and many similar passages clearly show the bent of Luther’s mind. He knew the enemy, but overcame it; his faith triumphed over doubt. In his later years he became more and more a conservative churchman. He repudiated the mystic doctrine of the inner word and spirit, insisted on submission to the written letter of the Scriptures, even when it flatly contradicted reason. He traced the errors of the Zwickau prophets, the rebellious peasants, the Anabaptists, and the radical views of Carlstadt and Zwingli, without proper discrimination, to presumptuous inroads of the human reason into the domain of faith, and feared from them the overthrow of religion. He so far forgot his obligations to Erasmus as to call him an Epicurus, a Lucian, a doubter, and an atheist. Much as he valued reason as a precious gift of God in matters of this world, he abused it with unreasonable violence, when it dared to sit in judgment over matters of faith.

Certainly Luther must first be utterly divested of his faith, and the authorship of his sermons, catechisms and hymns must be called in question, before he can be appealed to as the father of Rationalism. He would have sacrificed his reason ten times rather than his faith.

Zwingli was the most clear-headed and rationalizing among the Reformers. He did not pass through the discipline of monasticism and mysticism, like Luther, but through the liberal culture of Erasmus. He had no mystic vein, but sound, sober, practical common sense. He always preferred the plainest sense of the Bible. He rejected the Catholic views on original sin, infant damnation and the corporeal presence in the eucharist, and held advanced opinions which shocked Luther and even Calvin. But he nevertheless reverently bowed before the divine authority of the inspired Word of God and had no idea of setting reason over it. His dispute with Luther was simply a question of interpretation, and he had strong arguments for his exegesis, as even the best Lutheran commentators confess.

Calvin was the best theologian and exegete among the Reformers. He never abused reason, like Luther, but assigned it the office of an indispensable handmaid of revelation. He constructed with his logical genius the severest system of Protestant orthodoxy which shaped French, Dutch, English and American theology, and fortified it against Rationalism as well as against Romanism. His orthodoxy and discipline could not keep his own church in Geneva from becoming Socinian in the eighteenth century, but he is no more responsible for that than Luther for the Rationalism of Germany, or Rome for the infidelity of Voltaire. Upon the whole, the Reformed churches in England, Scotland and North America, have been far less invaded by Rationalism than Germany.

2. Let us now consider the application of the principle of free inquiry to the Bible.

The Bible, its origin, genuineness, integrity, aim and all its circumstances and surroundings are proper subjects of investigation; for it is a human as well as a divine book, and has a history, like other literary productions. The extent of the Bible, moreover, or the canon, is not determined by the Bible itself or by inspiration, but by church authority or tradition, and was not fully agreed upon till the close of the fourth century, and even then only by provincial synods, not by any of the seven ecumenical councils. It was therefore justly open to reinvestigation.

The Church of Rome, at the Council of Trent, settled the canon, including the Apocrypha, but without any critical inquiry or definite theological principle; it simply confirmed the traditional usage, and pronounced an anathema on every noe who does not receive all the books contained in the Latin Vulgate. She also checked the freedom of investigation by requiring conformity to a defective version and a unanimous consensus of the fathers, although such an exegetical consensus does not exist except in certain fundamental doctrines.

The Reformers re-opened the question of the extent of the canon, as they had a right to do, but without any idea of sweeping away the traditional belief or undermining the authority of the Word of God. On the contrary, from the fullness of their faith in the inspired Word, as contained in the Scriptures, they questioned the canonicity of a few books which seem to be lacking in sufficient evidence to entitle them to a place in the Bible. They simply revived, in a new shape and on doctrinal rather than historical grounds, the distinction made by, the Hebrews and the ancient fathers between the canonical and apocryphal books of the Old Testament, and the Eusebian distinction between the Homologumena and Antilegomena of the New Testament, and claimed in both respects the freedom of the ante-Nicene church (“homologumena” refers to the books of the New Testament which were recognized as belonging to the canonical books; “antilegomena” refers to the books of the New Testament which at first were not recognized as belonging to the New Testament Canon—H.V.).

They added, moreover, to the external evidence, the more important internal evidence on the intrinsic excellency of the Scripture as the true ground on which its authority and claim to obedience rests; and they established a firm criterion of canonicity, namely, the purity and force of teaching Christ and his gospel of salvation. They did not reject the testimonies of the fathers, but they placed over them what Paul calls the “demonstration of the Spirit and of power” (I Cor. 2:4).

Luther was the bold pioneer of a higher criticism, which was indeed subjective and arbitrary, but, after all, a criticism of faith. He made his central doctrine of justification by faith the criterion of canonicity. He thus placed the material or subjective principle of Protestantism above the formal or objective principle, the truth above the witness of the truth, the doctrine of the gospel above the written Gospel, Christ above the Bible. But we must remember that Luther first learnt Christ from the Bible and especially from the Epistles of Paul, which furnished him the key for the understanding of the scheme of salvation.

He made a distinction, moreover, between the more important and the less important books of the New Testament, according to the extent of their evangelic purity and force, and put Hebrews, James, Jude, and Revelation at the end of the German Bible.

He states his reason in the Preface to the Hebrews as follows: “Hitherto we have had the right and genuine books of the New Testament. The four that follow have been differently esteemed in olden times.” He therefore appeals to the ante-Nicene tradition, but his chief objection was to the contents.

He disliked, most of all, the Epistle of James because he could not harmonize it with Paul’s teaching on justification by faith without works, and he called it an epistle of straw as compared with genuine apostolic writings. However, we must not overlook the fact that Luther makes this remark in connection with the epistle of James when comparing it with the epistles of the apostle Paul. The German Reformer was not blind to the merits of James as a fresh and vigorous teacher of practical Christianity, did not therefore condemn this epistle of James entirely. The Lord willing, we will conclude this quotation in our following article. 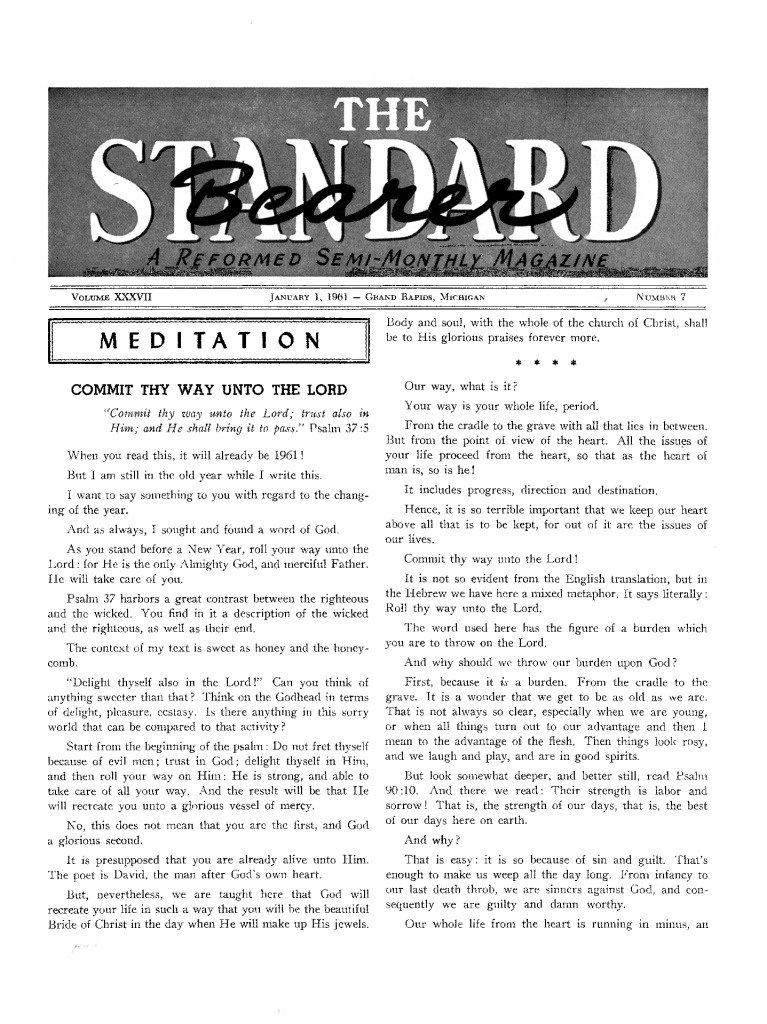