We will now continue with our quotation from Philip Schaff as he writes on “The New Mysticism,” Vol. VI, pages 236-242.

“German mysticism had a distinct individuality of its own. On occasion, its leaders quoted Augustine’s Constitutions and other works, Dionysius the Areopagite, Bernard and Thomas Aquinas, but they did not have the habit of referring back to human authorities as had the Schoolmen, bulwarking every theological statement by patristic quotations, or statements taken from Aristotle. The movement arose like a root out of a dry ground at a time where it might have been least expected to rise. Its field was the territory along the Rhine where the heretical sects, had had representation. It was a fresh outburst of piety, an earnest seeking after God by other paths than the religious externalism fostered by sacerdotal prescriptions and scholastic dialectics. The mystics led the people back from the clangor and tinkling of ecclesiastical symbolisms to the refreshing springs of water which spring up into everlasting life.

Compared with the mysticism of the earlier Middle Ages and the French quietism of the seventeenth century, represented by Madame Guyon, Fenelon and their predecessor the Spaniard Miguel de Molinos, German mysticism: likewise has its own distinctive features. The religion of Bernard expressed itself in passionate and rapturous love for Jesus. Madame Guyon and Fenelon set up as the goal of religion a state of disinterested love, which was to be reached chiefly by prayer, an end which Bernard felt it scarcely possible to reach in this world.

The mystics along the Rhine agreed with all genuine mystics in striving after the direct union of the soul with God. They sought, as did Eckart, the loss of our being in the ocean of the Godhead, or with Tauler the undisturbed peace of the soul, or with Ruysbroeck the impact of the divine nature upon our nature at its innermost point, kindling with divine love as fire kindles. With this aspiration after the complete apprehension of God, they combined a practical tendency. Their silent devotion and meditation were not final exercises. They were moved by warm human sympathies, and looked with almost reverential regard upon the usual pursuits and toil of men. They approached close to the idea that in the faithful devotion to daily tasks man may realize the highest type of religious experience.

By preaching, by writing and circulating devotional works, and especially by their own examples, they, made known the secret and the peace of the inner life. In the regions along the lower Rhine, the movement manifested it, self also in the care of the sick, and notably in schools for the education of the young. These schools proved to be preparatory for the German Reformation by training a body of men of wider outlook and larger sympathies than the mediaeval convent was adapted to rear.

For the understanding of the spirit and meaning of German mysticism, no help is so close at hand as the comparison between it and mediaeval scholasticism. This religious movement was the antithesis of the theology of the Schoolmen; Eckart and Tauler of Thomas. Aquinas, the German Theology of the endless argumentation of Duns Scotus, the Imitation of Christ of the cumbersome, exhaustiveness of Albertus Magnus. Roger Bacon had felt revulsion from the hairsplitting casuistries of the Schoolmen, and given expression to it before Eckart began his activity at Cologne. Scholasticism had trodden a beaten and dusty highway. The German mystics walked in secluded and shady pathways. For a catalogue of dogmatic maxims they substituted the quiet expressions of filial devotion and assurance. The speculative element is still prominent in Eckart, but it is not indulged for the sake of establishing doctrinal rectitude, but for the nurture of inward experience of God’s operations in the soul. Godliness with these men was not a system of careful definitions, it was a state of spiritual communion; not an elaborate construction of speculative thought, but simple faith and walk with God. Not processes of logic but the insight of devotion was their guide. As Loofs has well said, German mysticism emphasized above all dogmas and all external works the necessity of the new birth.

It also had its dangers. Socrates had urged men not to rest hopes upon the Delphian oracle, but to listen to the voice in their own bosoms. The mystics, in seeking to hear the voice of God speaking in their own hearts, ran peril of magnifying individualism to the disparagement of what was common to all and of mistaking states of the overwrought imagination for revelations from God.

Although the German mystical writers have not been quoted in the acts of councils or by popes as have been the theologies of the Schoolmen, they represented, if we follow the testimonies of Luther and Melanchthon, an important stage in the religious development of the German people, and it is certainly most significant that the Reformation broke out on the soil where the mystics lived and wrought, and their piety took deep root. They have a perennial life for souls who, seeking devotional companionship, continue to go back to the leaders of that remarkable pietistic movement.

The leading features of the mysticism of the fourteenth and fifteenth centuries may be summed up in the following propositions.

1. Its appeals were addressed to laymen as well as to clerics.

2. The mystics emphasized instruction and preaching, and, if we except Suso, withdrew the emphasis which had been laid upon the traditional ascetic regulations of the Church. They did not commend buffetings of the body. The distance between Peter Damiani and Tauler is world-wide.

3. They used the New Testament more than they used the Old Testament, and the words of Christ took, the place of the Canticles in their interpretations of the mind of God. The German Theology quotes scarcely a single passage which is not found in the NewTestament, and the Imitation of Christ opens with the quotation of words spoken by our Lord. Eckart and Tauler dwell upon passages of the New Testament, and Rhysbroeck evolves the fullness of his teaching from Matthew 25:6, “Behold the Bridegroom cometh, go ye out to meet him.”

4. In the place of the Church, with its sacraments and priesthood as a saving institution, is put Christ himself as the mediator between the soul and God, and he is offered as within the reach of all.

5. A pure life is taught to be a necessary accompaniment of the higher religious experience, and daily exemplification is demanded of that humility which the Gospel teaches.

6. Another notable feature was their use of the vernacular in sermon and treatise. The mystics are among the very earliest masters of German and Dutch prose. In the, Introduction to his second edition of theGerman Theology, Luther emphasized this aspect of their activity when he said, “I thank God that I have heard and find my God in. the German tongue as neither I nor they (the adherents of the old way) have found Him in the Latin and Hebrew tongues.” In this regard also the mystics of the fourteenth and fifteenth centuries were precursors of the evangelical movement of the sixteenth Century. Their practice was in plain .conflict with the judgment of that German bishop who declared that the German language was too barbarous a tongue to be a proper vehicle of religious truth.

The religious movement represented by German and Dutch mysticism is an encouraging illustration that God’s Spirit may be working effectually in remote and unthought-of places and at times when the fabric of the Church seems to be hopelessly. undermined with formalism, clerical corruption and hierarchical arrogance and worldliness. It was so at a later day when, in the little and remote Moravian town of Herrnhut, God was preparing the weak things of the world, and the things which were apparently foolish, to confound the dead orthodoxy of German Protestantism and to lead the whole Protestant Church into the way of preaching the Gospel in all the world. No organized body survived the mystics along the Rhine, but their example and writings continue to encourage piety and simple faith toward God within the pale of the Catholic and Protestant churches alike.

A classification of the German mystics on the basis of speculative and practical tendencies has been attempted, but it cannot be strictly carried out. In Eckart and Ruysbroeck, the speculative element was in the ascendant; in Tauler, the devotional; in Suso, the emotional; in Groote and other men of the Lowlands, the practical.” —end of quote from Philip Schaff.

False Mysticism is that conception which claims an immediate communication of the Divine knowledge and of Divine life from God to the soul as independently of the Scriptures and of the use of the ordinary means of grace. This Mysticism must not be confounded with the doctrine of spiritual illumination as held by the Church of God and according to the Word of God. No Christian would deny the truth of this spiritual illumination by the Holy Spirit. The mere outward presentation of the truth as contained in the Scriptures cannot profit any man to his salvation. One may be acquainted with all the truths of the Word of God, and yet be nothing more than a tinkling cymbal, as held before us in I Cor. 13. The natural man, we read in the Word of God, cannot receive the things of the Spirit of God because they are spiritually discerned and they are foolishness unto him. Saving knowledge of the truths of the Word of God can be the fruit only of an inner, supernatural and irresistible operation of the Spirit of God within the hearts and minds of the children of men. There is surely a mystical bond connecting the child of God with the living God of his salvation as revealed in Christ Jesus our Lord. This, however, is surely not to be regarded as identical with False Mysticism. They differ especially in two things. First, they differ as to their object. The object of the inward teaching of the Spirit is to enable us to discern the truth and excellence of what is already objectively revealed in the Bible. The illumination claimed by the Mystics communicates truth independently of its objective revelation. It is not intended to enable us to appreciate what we already know, but to communicate new knowledge. However, in the second place, the doctrines of spiritual illumination and of Mysticism differ not only in the object, but also in the manner in which the object is to be attained and experienced. The guidance of the Spirit is experienced in the way of prayer and by the diligent use of the appointed means of grace; the intuitions of the Mystic are sought in the neglect of all means, in the suppression of all activity inward and outward, and in a passive waiting for the influx of God into the soul. And so the effect of spiritual illumination is that the Word of God dwells in us in all wisdom and spiritual understanding, whereas what dwells in the mind of the Mystic is his own imagination. False Mysticism is pure subjectivism, and as unstable as the mind of man itself.” 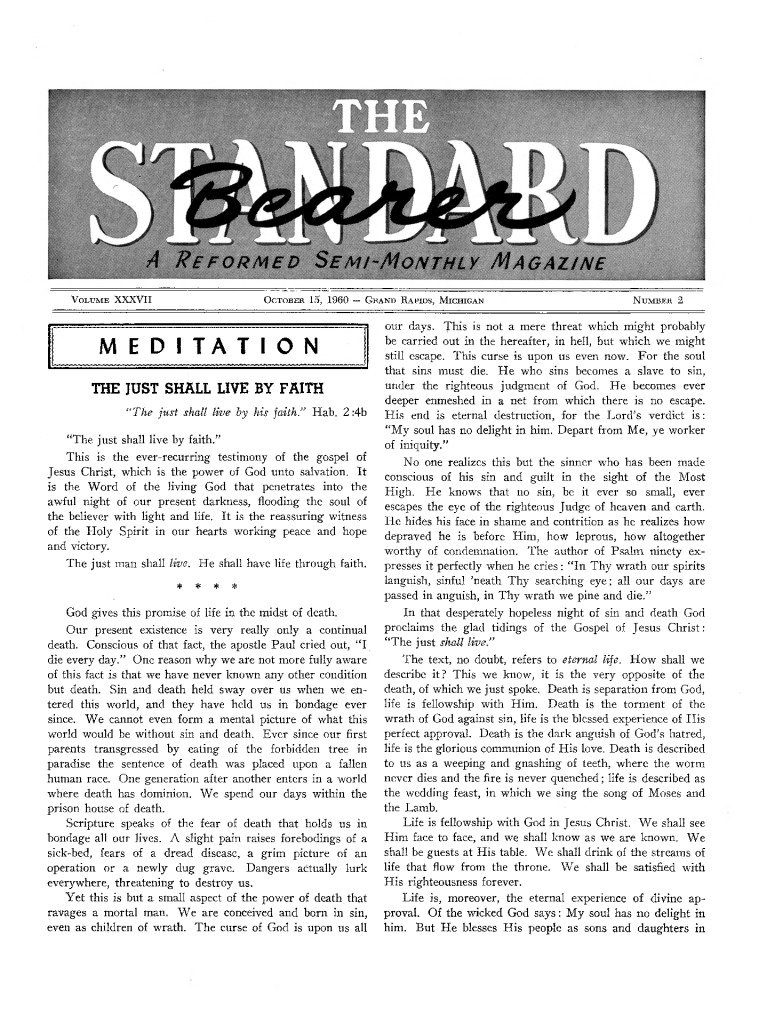