4.  The doctrine of the merit of good works as taught by Romanists is another most prolific error. They hold that works done after regeneration have real merit (meritum condigni), and that they are the ground of the sinner’s justification before God. They hold that a man may do more than the law requires of him, and perform works of supererogation, and thus obtain more merit than is neces­sary for his own salvation and beatification. That this super­fluous merit goes into the treasury of the Church, and may be dispensed for the benefit of others. On this ground in­dulgences are granted or sold, to take effect not only in this life but in the life to come.

5.  With this is connected the further error concerning Purgatory. The Church of Rome teaches that those dying in the communion of the Church, who have not in this life made full satisfaction for their sins, or acquired sufficient merit to entitle them to admission into heaven, do at death pass into a state of suffering, there to remain until due satisfaction is made and proper purification is affected. There is no necessary termination to this state of purgatory but the day of judgment or the end of the world. It may last for a thousand or many thousands of years. But Purgatory is under the power of the keys. The sufferings of souls in that state may be alleviated or shortened by the authorized min­isters of the Church. There is no limit to the power of men who are believed to hold the keys of heaven in their hand, to shut out and no man opens, and to open and no man shuts. Of all incredibilities the most incredible is that God would commit such power as this, too weak, ignorant, and often wicked men.

6.  The Romish Church teaches grievous error concern­ing the Lord’s Supper. It teaches, (1) That when consecrated by the priest the whole substance of the bread and the whole substance of the wine are transmuted into the sub­stance of the body and blood of Christ. (2) That as His body is inseparable from His soul and divinity, where the one is there the other must be. The whole Christ, therefore, body, soul, and divinity, is present in the consecrated wafer, which is to be worshipped as Christ Himself is worshipped. This is the reason why the Church of England in her Hom­ilies pronounces the service of the Mass in the Romish Church idolatrous. (3) That Church further teaches that the body and blood of Christ thus locally and substantially present in the Eucharist are offered as a true propitiatory sacrifice for the forgiveness of sin, the application of which is determined by the intention of the officiating priest.

7.  Idolatry consists not only in the worship of false gods, but in the worship of the true God by images. The second Commandment of the Decalogue expressly forbids the bow­ing down to, or serving the likeness of anything in heaven above or in the earth beneath. The precise thing, therefore, that is forbidden is that which the Church of Rome permits and enjoins, namely, the use of images in religious worship, prostration before them, and doing them reverence.

8.  Another great error of the Church of Rome is the worship of saints and angels, and especially of the Virgin Mary. It is not merely that they are regarded as objects of reverence, but that the service rendered them involves the ascription of divine attributes. They are assumed to be everywhere present, able to hear and answer prayer, to help and to save. They become the ground of confidence to the people, and the objects of their religious affections. They are to them precisely what the gods of the heathen were to the Greeks and Romans.

Such are some of the errors taught by the Church of Rome, and they prove that that Church instead of being in­fallible, is so corrupt that it is the duty of the people of God to come out of it and to renounce its fellowship.

A Church which claims to be infallible, ipso facto, claims to be the mistress of the world; and those who admit its in­fallibility, thereby admit their entire subjection to its author­ity. It avails nothing to say that this infallibility is limited to matters of faith and morals, for under those heads is in­cluded the whole life of man, religious, moral, domestic, social, and political.

A church which claims the right to decide what is true in doctrine and obligatory in morals, and asserts the power to enforce submission to its decisions on the pain of eternal perdition, leaves no room for any other authority upon earth. In the presence of the authority of God, every other dis­appears.

With the claim to infallibility is inseparably connected the claim to pardon sin. The Church does not assume merely the right to declare the conditions on which sin will be for­given at the bar of God, but it asserts that it has the prerog­ative to grant, or to withhold that forgiveness. “Ego te absolvo,” is the formula the Church puts into the mouth of the priesthood. Those who receive that absolution are saved; those whom the Church refuses to absolve must bear the penalty of their offences.

An infallible church is thus the only institute of salvation.

All within its pale are saved; all without it perish. Those only are in the Church who believe what it teaches, who do what it commands, and are subject to its officers, and especially its head, the Roman pontiff. Any man, therefore, whom the Church excommunicates is thereby shut out of the kingdom of heaven; any nation placed under its ban is not only deprived of the consolation of religious services, but of the necessary means of salvation.

If the Church be infallible, its authority is no less absolute in the sphere of social and political life. It is immoral to contract or to continue an unlawful marriage, to keep an unlawful oath, to enact unjust laws, to obey a sovereign hostile to the Church. The Church, therefore, has the right to dissolve marriages, to free men from the obligations of their oaths, and citizens from their allegiance, to abrogate civil laws, and to depose sovereigns. These prerogatives have not only been claimed, but time and again exercised by the Church of Rome. They all of right belong to that Church, if it be infallible. As these claims are enforced by penalties involving the loss of the soul, they cannot be resisted by those who admit the Church to be infallible. It is obvious, therefore, that where this doctrine is held there can be no liberty of opinion, no freedom of conscience, no civil or political freedom. As the recent ecumenical Council of the Vatican has decided that this infallibility is vested in the Pope, it is henceforth a matter of faith with Romanists, that the Roman pontiff is the absolute sovereign of the world. All men are bound, on the penalty of eternal death, to believe what he declares to be true, and to do whatever he decides is obligatory.—end of quote from Hodge, Vol. 1, pages 138- 150.

The Reformation Versus False Mysticism

The reader may recall that we are discussing the views on the Church during the time of the Reformation. We have noted that the main principles of the Reformation of the sixteenth century are usually considered to be two and distinguished as the formal and material principle. The formal principle of the Reformation is that the Reformers acknowledged only one source of authority: the Holy Scrip­tures. With this principle they stood opposed to Roman Catholicism, False Mysticism (Quakers, Anabaptists, etc.) and to Rationalism. We are still discussing this formal prin­ciple of the Reformation. We have called the attention of the reader at length to the view of Roman Catholicism which claims that the right and power to interpret the Bible belongs to the Church, that is, to the clergy, and this means ul­timately to the pope who has been declared infallible by that Church whenever he functions and acts officially. This doc­trine of infallibility, established by Rome during the last century, means that the pope has always been infallible, ever since he succeeded the apostle Peter. It is well that we bear this in mind. This means, of course, that whatever a pope has declared in the past, also in connection with the Roman Catholic doctrine that the pope is the temporal ruler of the world as well as the spiritual head and ruler of the Church cannot be altered or violated, inasmuch as any declaration to that effect was by Divine inspiration and all such utter­ances are infallible. We now wish to call attention to the view of the Church of the Reformation as this stood opposed to False Mysticism. False Mysticism is characterized by rejecting the objective authority of the Bible and relying upon “inner light”; Protestants claimed that the objective revelation in Scripture must be the sole and only reliable canon and rule for all faith and life.

We must distinguish, of course, between Mysticism and False Mysticism. There is, we surely understand, a certain type of Mysticism in the sound and Scriptural sense of the word and that must be maintained. True Christianity is surely mystical in a very real sense of the word. Christianity, in the true and living sense, is certainly never to be divorced from an inner, spiritual and living fellowship and experience of the heart. True Mysticism is certainly expressed by the psalmist in Psalm 66:16, and we quote: “Come and hear, all ye that fear God, and I will declare what He hath done for my soul.” And this also applies to what we read in Galatians 2:20, and we again quote: “I am crucified with Christ: nevertheless I live; yet not I, but Christ liveth in me: and the life which I now live in the flesh I live by the faith of the Son of God, Who loved me, and gave Himself for me.” The opposite of Mysticism in the sound and Scrip­tural sense of the word is dead orthodoxy, a dead intellectualism, a dead and lifeless agreement with and assent to the truths of the Word of God. If it be true that to divorce one’s inner and spiritual life and experience from the ob­jective standard of the Word of God will deprive a child of God of all firm assurance and confidence and will ultimately lead the Church of God into gross error, it is just as true that to divorce all knowledge of the Scriptures from an inner and living experience of the same will plunge the Church of God headlong into the midst of the world. True religion is certainly mystical in the true sense of the word. This must be maintained. However, we must be on our guard against False Mysticism. And False Mysticism is oftentimes the reaction against a cold and dead intellectual assent to the truths of the Word of God. It is to this False Mysticism and the stand of the Church of the Reformation against it that we wish to call attention in subsequent articles. 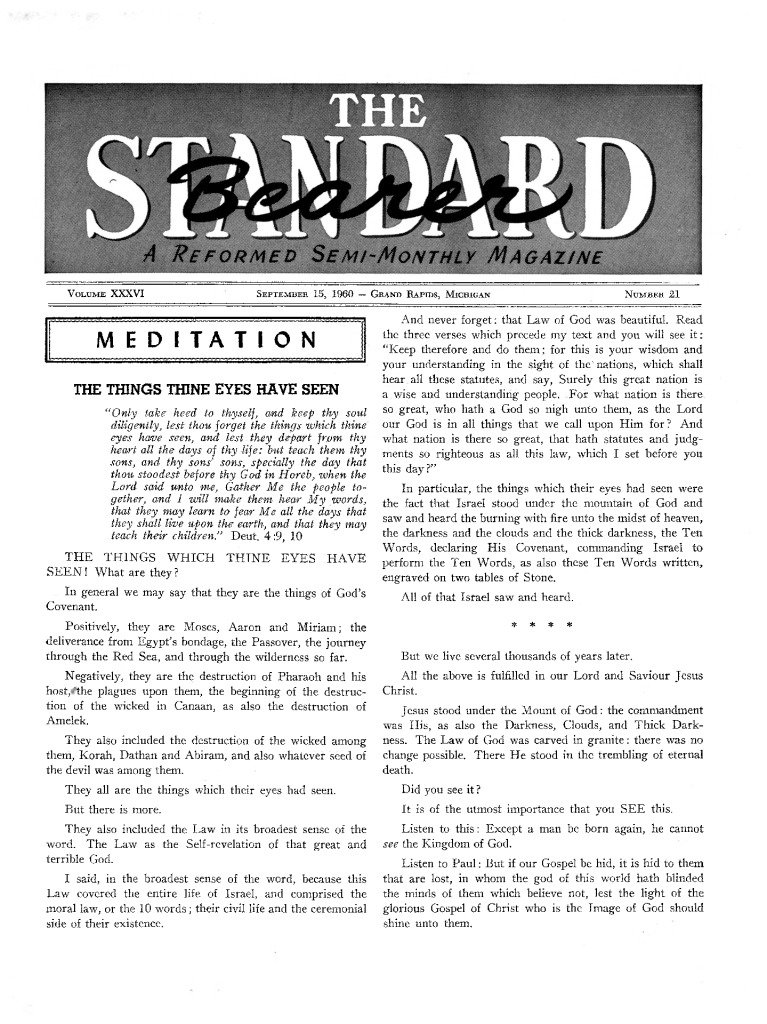