The Church and the Sacraments, Early Views Of The Church

Confronted with the task of writing on the his­tory of doctrine, a rich field, we understand, lies be­fore us. Bitter struggles have been fought by the Church of the living God in defense of such fundamen­tal doctrines as: the divine person of the Son, the two natures of the Savior in unity of divine person and their relation to each other, the utter depravity of man, God’s absolute sovereignty and the unconditional character of election, particular atonement, the efficacy of divine grace, the certain perseverance of the saints, etc. The attacks by the prince of the powers of the air upon the truth of holy writ have been constant and unrelenting. The Church of the Lord has surely been called upon to exercise unceasing vigilance in its defense of the Word of God.

This material is of great interest.

Of great interest, on the one hand, is the doctrine of the Church. Although it must be conceded that the early views of the Church, especially as enter­tained immediately after the age of the apostles, was characterized by simplicity, it cannot be denied that this simple conception of the Church underwent a tremendous change. The matter, of course, would be quite simple if there were but one church and one people in the midst of the world. Such, however, is hardly the case. It is true that, nominally speaking, there was but one true church in the world until the middle of the eleventh century when the famous schism between the East and the West occurred. But it is especially since the Reformation that the Protestant Church has been split up into innumerable parts and fragments. And it is surely an interesting question which concerns the nature and identity of the true Church. Must we make the absolute distinction be­tween one true Church and all other churches as be­ing false? Or, is it better to speak of degrees of pur­ity so that we distinguish between pure churches, less pure churches, and least pure churches? Besides, who belong to the Church of God as constituted in the midst of the world? There are those (as e.g. the Liberated Churches) who frown upon the distinction between the visible and invisible church, outward and external covenant. More questions could be asked at this time. Enough, however, has been said to war­rant the conclusion that a discussion of the history of the Church is indeed of great importance.

On the other hand, it is equally true that a dis­cussion of the history of the sacraments could be of great significance in our present day. We do not hes­itate to say that it is especially one’s views on the sacrament of baptism which reveals a person’s re­formed or unreformed tendencies. The ground for the baptism of infants is of fundamental significance. Do we baptize our children because we assume their regeneration? Or, do we baptize them because they are all equally in the covenant and because they are all equal partakers of the promise? This question is a fundamental question especially today. It can hard­ly be denied that the history of this doctrine should be of great interest especially in our present day. In­cidentally, we have mentioned only the sacrament of Baptism. The history which concerns the Eucharist or Lord’s Supper should also be of great interest. We know, for example, that three Lord’s Days of our Heidelberg Catechism are devoted to this doctrine. We should, therefore, also be interested in the his­tory which concerns the development of our doctrine as it concerns the Lord’s Supper.

As we consider the views of the Church as ex­pressed by the Church fathers we must bear in mind that the conception of the Church itself was not clear­ly defined by them. This is true of this entire period, and especially of the apostolic fathers. Their views were generally characterized by indefiniteness. This need not surprise us. Their conception of Christian­ity in general was certainly characterized by simplic­ity. And this also applies to their conception and views of the Church. This, we believe, is easily un­derstood. There were no creeds or confessions. In fact, the New Testament Scriptures or Canon was not established until the New Dispensation had been well under way. Neither was there any specific need of creeds as long as the apostles lived and directed the affairs of the Church of God. The people of the Lord naturally looked to the apostles for leadership. They were infallibly inspired and led by the Spirit of God, and their word was therefore accepted with finality. Besides, it lies in the very nature of the case that the Church’s conception of the truth should be character­ized by simplicity in the days of its New Testament infancy. The doctrines concerning Christ and the Kingdom of Heaven were not understood in their pro­fundity as they are today. The position of the Church of God in the Old Dispensation was naturally much simpler than it is today. Then it was limited to mere­ly one people, whereas, beginning with the New Dis­pensation, the Church embarked upon a universal course. It lies, therefore, in the very nature of the case that the truth of the holy Scriptures, also as pertaining to the views of the Church, should be mark­ed by simplicity.

Speaking of the apostolic fathers in distinction from the Church fathers, we refer to those leaders in the Church who assumed leadership immediately up­on the era of the apostles. Among them appear such famous names as Ignatius of Antioch, Polycarp of Smyrna, Hermas and Clement of Rome, Barnabas, probably of Alexandria, and others. The name, “ap­ostolic fathers,” is derived from the assumption that they were personally taught by the apostles. We need not dwell at length upon these early leaders of the Church in its New Testament infancy, especially be­cause we do not know too much about them. I am sure, however, that our readers will not be adverse to a little information concerning these men, several of whom suffered martyrdom because of their faith in the living God and of Christ Jesus whom He did send.

Little is known of the life of Ignatius of Antioch, except what may be gathered from the letters which bear his name. Iraneus, a later Church father, quot­ed him as a martyr who was condemned to be thrown to the wild beasts. Origin speaks of him as the suc­cessor of Peter in the bishopric of Antioch, giving the same account of his death as Iraneus. Purely legendary are the assertions that Ignatius was the child which Jesus placed in the midst of His apostles—see Matt. 18:24—and also that he was a disciple of either John or Peter. Ignatius, who suffered mar­tyrdom shortly after the turn of the second century, was bishop of the church at Antioch. His letters, and this is true of all the letters of the apostolic fathers, are admonitions and exhortations in tone and content. He views the Church of God as the people of God and believers in Christ Jesus, possessors of the life of Christ, called by the Spirit and through the preach­ing of the Word unto salvation of God in Christ Jesus, and called to walk in all unity and humility, faith and love, confessing Christ and revealing themselves as a people saved by the blood and grace of Jesus Christ, our Lord. A sharp distinction was not made between the Church visible and invisible, the Church as an organism and an institute, etc. There was but one Church of God in the days of Ignatius. The on­ly distinction which existed was between the Jews, the heathens, and the Christians. And the Church was constituted of those who by the grace and Spirit of God believed in Jesus, had been purchased and washed by His blood, and confessed His Name in the midst of the world.

Another of the apostolic fathers concerning whom little is known is Clement of Rome. He was probably a Gentile and a Roman. He seems to have been at Philippi with Paul when that firstborn of the West­ern churches was passing through great tribulations and trials of faith. There, with holy women and others, he ministered to the apostle and to the saints. As this city was a Roman colony, we need not inquire how a Roman happened to be there. He was possib­ly in some public service, and it is not improbable that he had visited Corinth in those days. A co-presbyter with Linus and Cletus, he succeeded them in the gov­ernment of the church at Rome. In an epistle writ­ten by him to the Corinthians we note the same ad­monitory and exhortative tone and content which characterized the writings of Ignatius. From the apostle, Paul, and his companion, Luke, he had no doubt learned the use of the Septuagint, in which his knowledge of the Greek tongue soon rendered him as adept. It is believed that he survived the fiery persecution un­der Nero in which Linus and Cletus are believed to have perished. He fell asleep in the Lord, probably soon after he had dispatched a letter to the Philippians. He certainly shares with others what the apostle, Paul, has written in Phil. 4:3: “His name is in the book of life.” 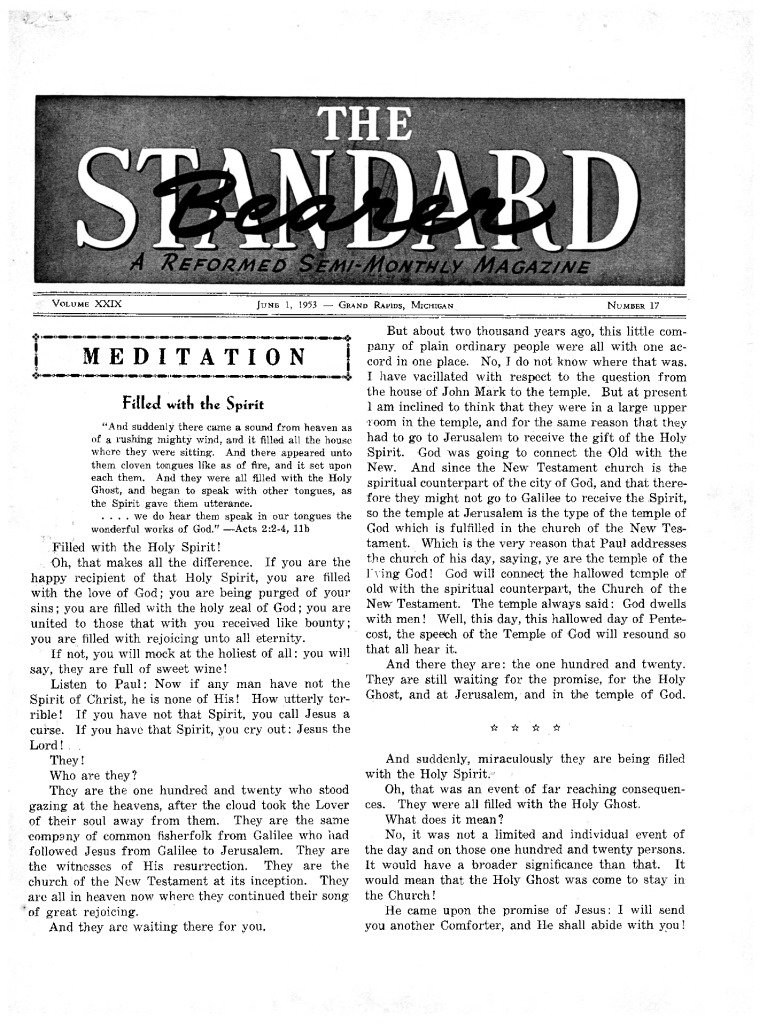