The Church and the Sacraments, Early Views Of The Church (Cont’d). The Unity of the Church

We had concluded our preceding article by calling attention to Cyprian, bishop of Carthage, and noted that he, too, declared that there could be no salvation for anyone except in the Church.

We will have an opportunity to refer to him again in connection with the rise to power of the bishops and the Episcopalian form of church government which was in effect until the Reformation. We are now dis­cussing the views of the early Church Fathers with respect to the Church and salvation. We quote the following from Cyprian: “Now also his words are evident, and his poisons are plain. He promises peace, in order that peace may not possibly be attained; he promises salvation that he who has sinned may not come to salvation; he promises a Church, when he so contrives that he who believes may utterly perish apart from the Church….For as our unanimity and con­cord ought by no means to be divided, and because we cannot forsake the Church and go outside her to come to you, we beg and entreat you with what exhortations we can, rather to return to the Church, your mother, and to our brotherhood. I bid you, dearest brethren, ever heartily farewell….Whoever he may be, and whatever he may be, he who is not in the Church of Christ is not a Christian. Although he may boast himself, and announce his philosophy or eloquence with lofty words, yet he who has not maintained broth­erly love or ecclesiastical unity has lost even what he previously had been.

The Unity of the Church

The Church of God was generally represented by the apostolic fathers and the Apologetes (immediately upon the age of the apostles) as a communion of saints, the people of God whom the Lord had chosen for a possession. They were the people who believed in the Lord Jesus Christ. We can understand the simplic­ity of this conception of the Church as entertained during the early days of its New Testament existence. There was only one Church of God and of Christ Je­sus in the midst of the world. The distinction be­tween Jews, heathens, and Christians was very pro­nounced and clearly marked and defined. The present day phenomenon of churches and denominations, all confessing the same Lord Jesus Christ and advocating their conception of Christ and of the Scriptures to be the purest, was wholly lacking in the days of and im­mediately following upon the apostles.

Very emphatically the early Church fathers main­tain the catholicity, oneness, and universality of the Church. The catholicity of the Church, we under­stand, denotes its universal character. The Church was constituted of the saints, the elect; they have one God, one Christ, one Spirit of grace, one calling. Be­cause it was the communion of saints all salvation was limited to it and there was no salvation possible out­side of it.

It is especially Cyprian to whom we are indebted for his emphasis upon the unity of the Church. He compares the Church to the sun with its many rays, to a tree with its many branches, to a source from which there flow many brooks. He emphasizes, there­fore, the thought that, although there are many con­gregations, the Church is one. Quoting this Church Father, we hear him say the following: “Does he who strives against and resists the Church trust that he is in the Church, when moreover the blessed apostle Paul teaches the same thing and sets forth the sac­rament of unity, saying, “There is one body and one spirit and one hope of your calling, one Lord, one faith, one baptism, one God?” And this unity we ought firmly to hold and assert, especially those of us that are bishops who preside in the Church, that we may also prove the episcopate itself to be one and un­divided. Let no one deceive the brotherhood by a false­hood: let no one corrupt the truth of the faith by per­fidious prevarication. The episcopate is one, each part of which is held by each one for the whole. The Church also is one, which is spread abroad far and wide into a multitude by an increase of fruitfulness. As there are many rays of the sun, but one light; and many branches of a tree, but one strength based in its tenacious root; and since from one spring flow many streams, although the multiplicity seems diffused in the liberality of an overflowing abundance, yet the unity is still preserved in the source. Separate a ray of the sun from its body of light, its unity does not allow a division of light; break a branch from a tree,—when broken, it will not be able to bud; cut off the stream from its fountain,—that which is cut off dries up. Thus also the Church, shone over with the light of the Lord, sheds forth her rays over the whole world, yet it is one light which is everywhere diffused, nor is the unity of the body separated. Her fruitful abun­dance spreads her branches over the whole world. She broadly expands her rivers, liberally flowing, yet her head is one, her source one; and she is one moth­er, plentiful in the results of fruitfulness; from her womb we are born, by her milk we are nourished; by her spirit we are animated.”

Continuing with this quotation from Cyprian, we read as follows: “The spouse of Christ cannot be adul­terated; she is uncorrupted and pure. She knows one home; she guards with chaste modesty the sanctity of one couch. She keeps us for God. She appoints the sons whom she has born for the kingdom. Who­ever is separated from the Church and is joined to an adulteress, is separated from the promises of the Church; nor can he who forsakes the Church of Christ attain to the rewards of Christ. He is a stranger; he is profane; he is an enemy. He can no longer have God for his Father who has not the Church for his mother. If anyone could escape who was outside the ark of Noah, then he also may escape who shall be outside of the Church. The Lord warns, saying, ‘He who is not with me is against me, and he who gathers not with me scattereth.’ He who breaks with the peace and the concord of Christ, does so in opposi­tion to Christ; he who gathereth elsewhere than in the Church scatters the Church of Christ, and the Lord says, ‘I and the Father are one;’ and again it is written of the Father and of the Son and of the Holy Spirit, ‘And these three are one.’ And does anyone believe that this unity which thus comes from the div­ine strength and cohere in celestial sacraments, can be divided in the Church, and can be separated by the parting asunder of opposing wills? He who does not hold this unity does not hold God’s law, does not hold the faith of the Father and the Son, does not hold life and salvation. This sacrament of unity, this bond of concord inseparably cohering, is set forth where in the gospel the coat of the Lord Jesus Christ is not at all divided, nor cut, but is received as an entire gar­ment, and is possessed as an uninjured and undivided robe by those who cast lots concerning Christ’s gar­ment, who should rather put on Christ.”

We do not purpose at this time to call attention to the sentiments expressed by this renowned Church Father relative the episcopate, the rule by the bishops. These thoughts are indeed of great interest. However, we will have opportunity to call attention of our read­ers to these sentiments in subsequent articles. It is now of interest to note what Cyprian teaches us in connection with the unity of the Church. There may be many rays, he writes, many branches, and many streams, but there is only one sun, one tree, one source from which all these streams flow forth. Moreover, the catholicity (worldwide) of the church is also maintained in the words: “Thus also the Church, shone over with the light of the Lord, sheds forth her rays over the whole world.” However, the author adds that it is one light which is everywhere diffused and that the unity of the body is not separated. In fact, al­though the multiplicity seems diffused in the liberal­ity of an overflowing abundance, yet the unity is still preserved in the source. And he also declares em­phatically that whoever is separated from the Church is separated from the promises of the Church, from God the Father, and from salvation. Hence, the unity and oneness of the Church of God must be maintained. There may be several congregations, but there is and can be only one Church. This unity of the Church was therefore strongly emphasized by the leaders of the Church in the days of its New Testament infancy. 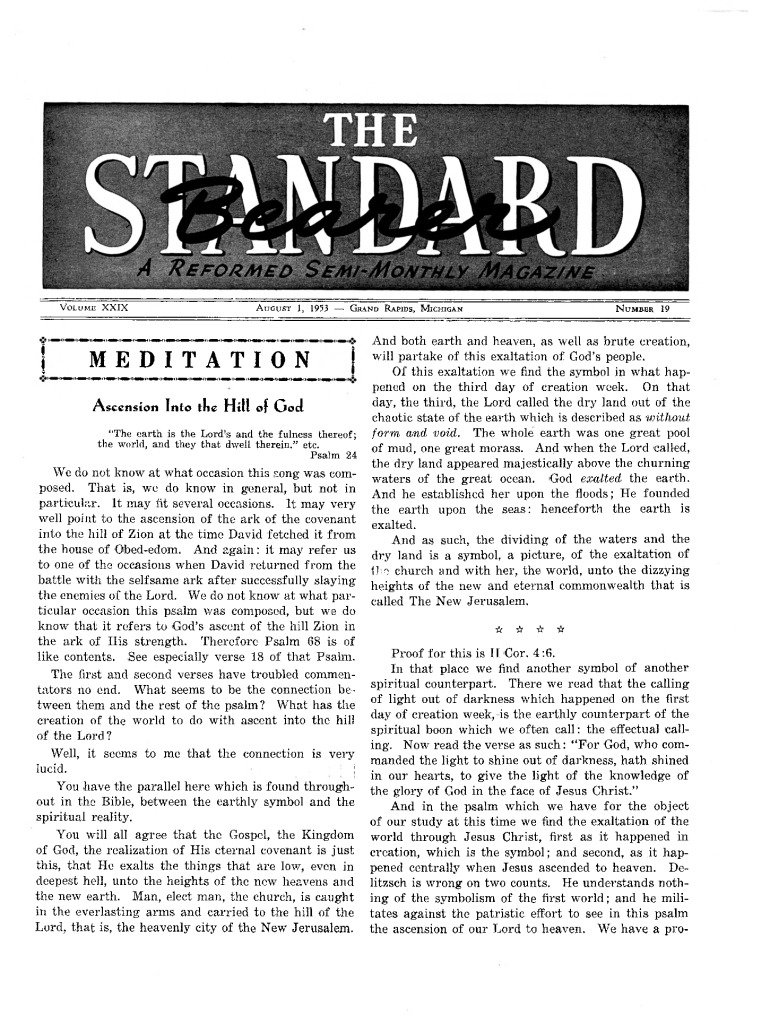