We now continue with our quotation from The New Schaff -Herzog Encyclopedia of Religious Knowledge on the Romish Order of Exorcist.

“The first certain evidence of the employment of exorcism, in the case of catechumens is offered by Cyprian in 256; it is found here in use both in the Catholic Church and among heretics, so that it is evidently no new thing. Another mention of it, possibly somewhat older, is found in the Canones Hippolyti. It is doubtful whether Tertullian knew of the practice, or whether the Clementine Homilies (III. 73) intend to refer to it in the description of the daily laying on of hands during the preparation for baptism. At the Carthaginian council of 256 in which it is first clearly mentioned, certain bishops requested that it, together with baptism, should be employed at the reception of heretics into the Church; the reason given, that “heretics are worse than pagans,” shows how definitely exorcism was still connected with the thought of paganism. In the same context it is interesting that an early Greek form for the reception of a convert from Judaism contains a renunciation, but no exorcism. When exorcism was thus once brought into connection with baptism, it was applied to the baptism of infants in the same unreflecting way as were the other ceremonies originally belonging to adult baptism. As in the service for infant baptism the various liturgical acts of the catechumen’s preparation were combined into a continuous function, the various exorcisms which found a place in that were here also included. At the outset came the exsufflatio, a thrice-repeated breathing in the face of the child, with the words “Depart from him, thou unclean spirit, and give place to the Holy Spirit, the Paraclete”; after the giving of salt, there was a long exorcism, three times repeated, each time with a different command to the devil to depart from the child. This remained substantially the same until the end of the Middle Ages. The Rituale Romanum of 1614 condensed it considerably, retaining only theexsufflatio at the beginning with the last of the three exorcisms and its introduction.

Luther saw no objection to the exorcism in the baptismal office, which he retained in his own of 1523, abbreviating it, indeed, but not on any theological ground. In that of 1526 it was further abbreviated, and the exsufflatio omitted; but relics of the Roman function passed from this into the majority of the Lutheran service-books, to excite bitter controversy later within the Lutheran ranks, and to be the subject of reproach on the part of the Calvinists. When not forced by such attacks to defend the practice, the Lutheran theologians freely admitted that it was a non-essential, and at the Cassel Conference of 1661 expressed their willingness to change it to a prayer for deliverance from the power of Satan. In the rationalistic period at the end of the eighteenth century, it finally disappeared from one service-book after another, and now, since its general abandonment by the Lutherans, the ceremony has no place in the rites of any Protestant Church.” — end of quote.

Concerning the Romish order of Lector, we read in The New Schaff-Herzog Encyclopedia of Religious Knowledge, Vol. 6, page 437, as follows: “In the early Church, an ecclesiastic in minor orders appointed to read to the congregation from the Scriptures and other religious writings was a lector. From the very first the oral reading of the sacred Scriptures occupied a large place in religious services, and for a long time it was the sole, or at least the principal means of imparting Scriptural knowledge to the congregation. Since during the first two centuries Christianity diffused itself especially among the poorer classes, and the congregations were frequently small, it was not always easy to find a competent reader of the sacred books, written as they were without spacing between the words. The position of the lector in the congregation was consequently an important one. In addition to reading, he often expounded passages of Scripture, especially as the sermon was not yet an official duty. Alphaeus, lector and exorcist at Caesarea (died 303), was “preacher and teacher of the Word of God” at that place, “and had great fortitude before every one.” During the early centuries the lector appears to have been reckoned with the spiritual leaders of the congregations, with the prophets, evangelists, and teachers who were accustomed to conduct divine worship. Certain expressions in liturgies of the later time reflect the ancient estimate of the lector’s office; thus the Statuta ecclesae antique observe of the prospective lector, “he is to have a part with those who minister the word of God,” consequently the lector occasionally took precedence of the deacon and subdeacon. The development of polity in the Church catholic from the second century downward was unfavorable to the dignity of the lector’s office. The bishop or the presbyter was accustomed to appropriate the sermon, and sometimes the preacher included the Scriptural reading as a part of his functions, with the result that the lector became Superfluous. In the ceremonially ordered public worship from the fourth century onward, the reading of the Gospel was regularly reserved to the deacons or presbyters, and the lector came to be reckoned with the clerici minors, being of the next to the lowest ranks in the order of ecclesiastical promotion. In many church districts, children and even catechumens were admitted to the lector’s ranks, an impropriety which Justinian sought to correct. The ritual for the installation of the lector was furnished by the liturgies. It usually consisted in the delivery of the codex of the sacred Scriptures. In the Roman Catholic Church the lector’sordo still exists, but in a merely formal sense.

And, finally, another of Rome’s minor orders is the Doorkeeper. Concerning this holy order the New Schaff-Herzog Encyclopedia of Religious Knowledge has the following, and this article appears in Vol. VIII, page 283 in connection with a man named Ostiarius, and we quote: “Ostiarius was primarily a porter and later one of the minor orders of the clergy. Originally the porter was a slave (cf. Mark 13:34; John 10:3; John 18:17; Acts 12:13); but when the Christians came to possess their own churches, they were compelled to have porters, who, after the second half of the third century, were reckoned among the minor clergy. From Rome the employment of porters spread, so that most Western and some Eastern communities possessed them in the fourth century. Since the office was entrusted only to persons of settled age, and since frequent changes were undesirable, the ostiarius was debarred from ecclesiastical advancements. An ordination rite, with the giving of the keys of the church as its central feature, is given in the Statuta ecclesiae antique, and, more fully, in the Sacramentary of Gregory. In the East the order declined earlier than in the West, though ostiarii are mentioned as late as the Trullan Council of 692. Also in the Roman Church sacristans are no longer clergy, though the ostiarius ordination is still conferred, as a matter of form, at the beginning of the clerical career.”

In criticizing this conception of the Romish sacrament of the Holy Orders, we wish to call attention; in the first place, to the fact that the Romish Church accuses all those who deny this teaching of being guilty of creating a human figment as the product of the imagination of men who are unskilled in ecclesiastical matters. This is stated repeatedly in the chapters and canons which we quoted in our preceding article as decreed by the Romish Council of Trent. We ask in all seriousness: where is the proof from the Word of God that sub deacons, apolyths, exorcists, lectors and doorkeepers are offices in the Church of God and that these men must be ordained by the laying on of hands? These are indeed human figments that have been devised by men. All this merely indicates and establishes how everything in the Romish Church is inseparably connected with the hierarchy. The priesthood and the dependence of the people upon this priesthood is indeed the cardinal principle of the Roman Catholic Church.

We conclude our appraisal of this Romish sacrament with a quotation from the Dogmatics of Dr. H. Bavinck, Vol. IV, pages 365-367, and we quote (we translate): “With the calling and the examination comes finally yet the ordination which occurred especially by the laying on of hands. This practice was in vogue in Israel with the blessing, Gen. 48:14, Lev. 9:22, the offering, Ex. 29:10, Lev. 1:4 . . ., at the appointment to an office, Numbers 27:18-23, later also at the installation of judges and the promotion of teachers (leeraars). Jesus laid the hands upon people to heal, Matt. 8:15, etc., but we read nowhere that He did this at the appointment to an office. His apostles were appointed by Him merely by means of a word, without any ceremony, Matt. 10:1 f.f.,Matt. 28:19. At the appointment of Matthias (we understand, of course, that the question whether Matthias was actually appointed to the office of the apostleship is a matter of doubt, H.V.), Paul, Barnabas, Silas, Luke, etc., mention is never made of a laying on of hands; it was surely no common practice in connection with the introduction into an ecclesiastical office. But the laying on of hands did take place by healing, Acts 9:12,17, by the imparting or communication of the gift of the Spirit, Acts 8:17-19, by the appointment of deacons, I Tim. 4:14, II Tim. 1:6; according to I Tim 3:22 it had become general in connection with the ordination to an ecclesiastical office and according toHeb. 6:2 it belonged with the first principles of the doctrine of Christ. But it was not an actual bestowal of the spiritual gifts of an office. For we read in Acts 6:3 that the deacons, who had been chosen, had to be full of the Holy Spirit and of wisdom before the laying on of hands. In Acts 13:3 the laying on of hands does not occur with the ordination, but with the sending out of Barnabas and of Paul, who already were in office. According to I Tim. 1:18, I Tim. 4:14 the appointment of Timothy to be an evangelist was confirmed by prophetical testimonies. (getuigenissen) and by the laying on of hands. It is true that in II Tim. 1:6 the gift of God was in him by the putting on of hands, but I Tim. 4:14teaches that it was given by prophecy, with the laying on of hands of the presbytery; which proves that prophecy and the laying on of hands were not the source of the gifts, but the means whereby they were brought over in the service of the congregation and were appointed unto that end.”

We herewith conclude this quotation from the Dogmatics of Dr. Bavinck as far as this article is concerned. Time and space forbid us to continue with it. The Lord willing, we will resume this quotation in our following article. It is certainly true what we read in the Systematic Theology of C. Hodge: “The Apostles, however, had only the power of communicating miraculous gifts. They neither claimed nor pretended to exercise the power of conferring the sanctifying or saving influences of the Spirit. As the Church of Rome claims for its clergy a power far above that of angels or archangels, so it claims for its bishops powers far transcending those of the Apostles. 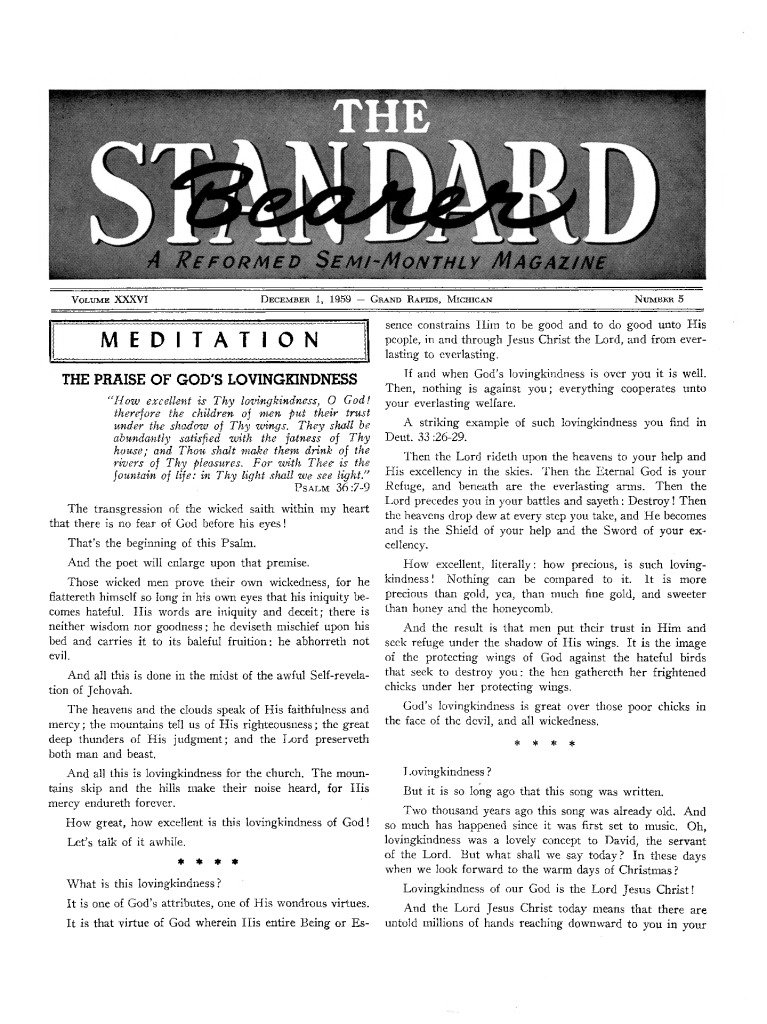