The Changing of Our Vile Body

The Changing of Our Vile Body

“Who shall change our vile body that it may be fashioned like his glorious body, according to the working whereby he is able even to subdue all things unto himself.”

“For our conversation is in heaven; from whence also we look for the Savior, the Lord Jesus Christ”:

So the apostle had written in the verse immediately preceding our text. And there he is explaining how the citizenship of the children of God differs from that of the ungodly. The latter are the enemies of the cross of Christ; whose end is destruction, whose God is their belly, whose glory is in their shame, who mind earthly things. The ungodly, therefore, belong here in this present evil world, are under the polity of the prince of darkness, and with the wicked world shall be destroyed in both soul and body.

How different is it with the children of God!

Their kingdom, under whose polity they are governed, is the kingdom of heaven. Their God is the one only true God. Their glory is the glory of Christ in heaven. Their end is everlasting salvation in soul and body.

Because this is so, the real life of the children of God is in heaven. That’s where their citizenship is. As the apostle in another place states it: They are risen with Christ, and seek the things above, where Christ sitteth on the right hand of God. Their life is hid with Christ in God. (Col. 3:1-3).

Strictly speaking, therefore, the children of God do not belong here in the present evil world. And so long as they are here, they are marked as aliens. If they walk as strangers and pilgrims in the world, their presence here may be denied them. Either the world will see to it that they have no place for the sole of their feet; or, God, Who is the King over the citizens of heaven, may call His subjects into His everlasting heavenly kingdom.

They belong to heaven, and to heaven they must go!

But the question arises: How could they ever dwell in the heavenly homeland the way they are?

Imagine for a moment that suddenly they should be transported to heaven as they are. Would they not feel themselves also there as aliens?

O, it is true, that in principle they possess the new life of Christ in their hearts, which life is heavenly and eternal as it is immortal. But do they not have this life in a body which is both earthly and corrupt? The eyes of their earthly bodies, which are adapted only to the earthly scene, could never sparkle with the delight of beholding the glories of heaven. Their ears, which are adapted only to the sounds that are peculiar to the earth, never would allow them to sense the lyric strains of the angelic realm and the hallelujah chorus of the redeemed. The mind of the flesh is both earthly and carnal, and could not appreciate the glory of heaven. Fact of the matter is, the body in which the saints now dwell would only be in their way, and deny them the privilege of seeing and hearing the beauties and joys of the heavenly kingdom.

The apostle furnishes the answer in the words of our text.

The Lord Jesus Christ; the Saviour, Who has gone into heaven, from whence also we look for Him—He it is that will bring about the change in respect to our bodies.

Our vile body, or, better translated, the body of our humiliation, looks simply at the effect of sin upon the body, not at the cause. It is true, of course, that our bodies are vile and corrupt. Death with all its attending circumstances is always working in them, and this vileness and corruption becomes most evident when death has finished its work.

But the apostle says something more significant than this. He is speaking of the body of our low estate, or the body of our humiliation. And this implies the fall. And the fall implies a higher estate. Hence, we have a body which once stood in a high estate. As one of the articles of faith expresses the truth concerning fallen man (Article 14), “Being in honor he understood it not, neither knew his excellency, but willingly subjected himself to sin and consequently to death and the curse,” so it was. As an image bearer of God man was able to reflect the image of God in a creatural way, and this, too, in body and soul. But through sin he is fallen into a low estate. He now possesses a body which has been truly humbled, in which the curse of death reigns.

The reality of this awful humiliation is always so much in evidence. The curse of death follows each one from the cradle to the grave. Our Reformed Fathers sensed this awful reality when they incorporated in the prayer before infant baptism these words: “that they may, with a comfortable sense of thy favor, leave this life which is nothing but a continual death. . . .” In our scientific age mothers are exhorted by the medical profession to take good care of their babies even before they are born. And what conscientious mother will not be willing to spend sleepless nights watching at the infant’s crib after it is born and shows the least sign of sickness? And what begins with the infant continues throughout one’s entire life-span. The multitude of medical journals and books which are published annually, the myriads of hospitals and health clinics which mushroom all about us are stark evidences of the reality of the humiliation of the body. All you have to do is sit in the waiting room of Cook County Hospital in Chicago for a half a day, and you will leave with the thought that the whole world is sick and dying. No closer does the reality come to us than when we behold the sickness and death of one who is very dear to us. Perhaps it started already when he or she was young. You took them from one doctor to another, but no one seemed to know the cause of the fevers. You listen to this neighbor and that friend who heard of a very special doctor many miles away. So you take your beloved to see him. He sends you home with nothing positive and a packet of pills. At last your beloved gives up and informs you it is all for nought. You also give up, and sit there watching him pine away and die. And then you bring him to his grave, where the work of humiliation is completed.

The humiliation of our bodies is not complete until death and the grave have done their work, until all that was earthly has completely dissolved, when the body returns to the dust from whence it came.

Such is the end of the body of our humiliation!

But necessary it is for the change that must take place with respect to all the children of God. For flesh and blood shall not inherit the kingdom of heaven.

The humiliation of the body, however, is not the end, but the beginning.

The beginning of a glorious change!

Such is the plain teaching of our text.

Earlier in this epistle (Philippians 2:6-11), the apostle had written concerning the Lord Jesus Christ in terms very similar to those he uses in our text. “Who being in the form of God, thought it not robbery to be equal with God; but made himself of no reputation, and took upon him the form of a servant, and was made in the likeness of men: and being found in fashion as a man, he humbled himself, and became obedient unto death, even the death of the cross. Wherefore God also hath highly exalted l-rim, and given him a name which is above every name: that at the name of Jesus every knee should bow, of things in heaven, and things in earth, and things under the earth; and that every tongue should confess that Jesus Christ is Lord to the glory of God the Father.” Note how He Who exists in the form of God took on Him the form of a servant, in which form He humbled Himself even to the death of the cross. And when you read that God highly exalted Him, you must understand that in human nature He is again changed in form.

The apostle Peter informs us (II Pet. 1:16ff) that he and other apostles were with Christ in the Mount of Transfiguration where they saw a prefigurement of the glory Christ would receive when He had first suffered the death of the cross, a glory that was so dazzling that they could not bear to look upon it. It was the glory of His resurrected and ascended body which He now possesses at God’s right hand.

Into that glory must the body of our humiliation be changed.

The apostle in the preceding context aspired to attain to that glory (vss.8-11). And in our text the apostle with the church expects it. We look to the heavens for the parousia, the coming of the Saviour, the Lord Jesus Christ, Who shall change us into the glory which Christ now possesses.

The glory of which must be seen in the sharp contrast between what we have now, and what we will become.

Such is indeed the change we look for with respect to the bodies of the children of God that have been planted in the earth. And if you are concerned about the bodies of those who shall be yet alive when the Saviour comes, the apostle also offers an explanation for that. “Behold, I shew you a mystery; we shall not all sleep, but we shall all be changed, in a moment, in the twinkling of an eye, at the last trump: for the trumpet shall sound, and the dead shall be raised incorruptible, and we shall be changed.”

. . . according to the working whereby He is able even to subdue all things unto Himself.

The resurrected and glorified Saviour has received energizing power to accomplish the change.

Yes, He has received such great power that He is enabled to put in subjection all things. Nothing is excluded from this subjection. All men, angels, and devils are made subject unto Him. All the powers in the creation, in heaven, on earth, and under the earth—all are under His dominion and power.

And therefore also our bodies!

And so we may safely entrust our bodies to the grave, in the hope of the complete change at the moment of His parousia. 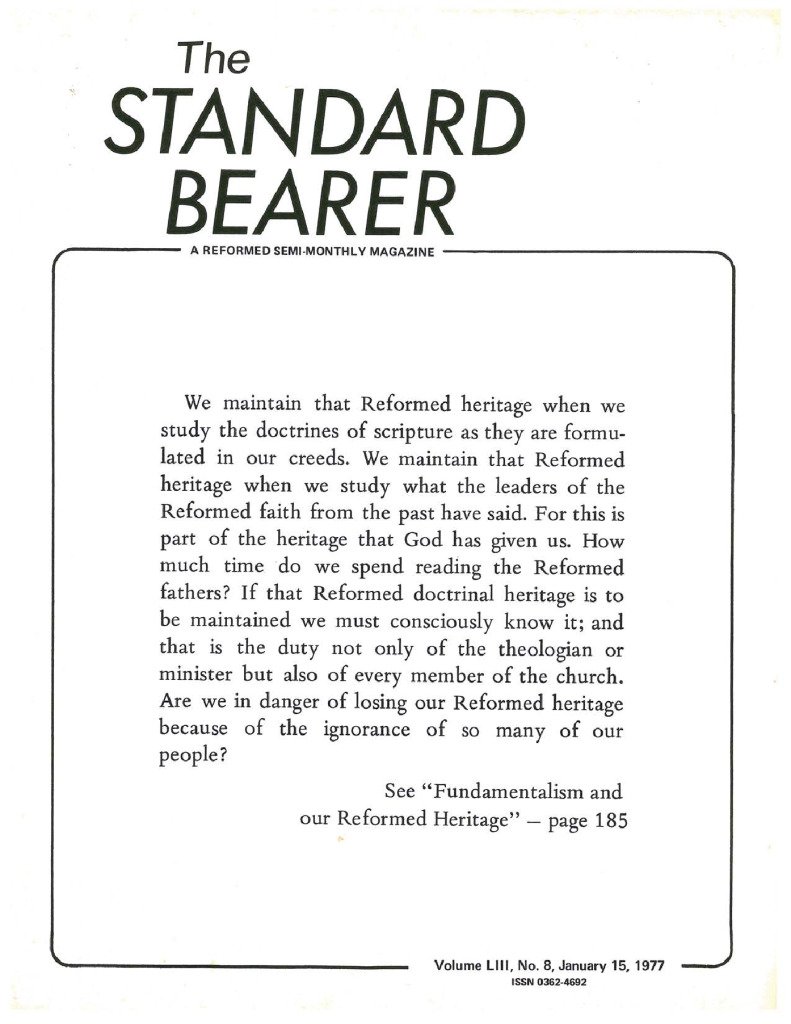