The Canons of Dordt and missions (2)

The Canons of Dordt and missions (2)

In our previous article we noted that the creeds are at times criticized for not saying enough about missions and are, therefore, to be blamed for the lack of missionary zeal in Reformed churches and their members. We noted, however, that the very existence and possession of creeds in Reformed churches means that those churches are (by God’s grace) mission-minded churches.

We now turn our attention more specifically to the ways in which the Canons of Dordt speak about mis­sions. We do this especially in light of the 400th anniversary of the writing and adoption of this creed.

Missions is to preach the gospel

One way in which the Canons of Dordt specifically speak about and promote mission work is by how much they have to say and what they actually say about the preaching of the gospel. And that, after all, is at the very heart of mission work. Mission work is not about addressing social or economic or political woes. But the mission calling of the church is to go into all the world and preach the gospel. That gospel must be preached to sinners. Those sinners must be called to repentance and to faith in Jesus Christ. The Canons have much to say about all this. This creed is, therefore, clearly missionary in character.

This is evident already in the opening articles of the creed. In those articles, the Canons immediately point out that all mankind have fallen into sin and deserve to per­ish, but that God calls and sends forth men to preach the gospel with a view to calling and bringing sinners to re­pentance and to a saving faith in Christ (I, Arts. 1-3). The Canons make the point that because sin is universal, the preaching of the gospel must also be universal. In this way the Canons echo the language of the Great Commission, namely, that the gospel must be preached to “all nations.” The objects of mission work are not merely the poor, the oppressed, and the sick, but also the rich, the strong, and the powerful. That is, all men are the proper objects of mission work, because all men are sinners.

The Canons, in response to the teachings of the Arminians, speak boldly concerning man’s total depravi­ty and corruption. This bears on missions, for as the Canons make very clear in Heads III/IV, Articles 4-5, there is no possibility that any sinner will find or know or turn to God either by means of the light of nature or by means of the law. But what “neither the light of nature nor the law could do, that God performs by the operation of the Holy Spirit through the Word or ministry of reconciliation, which is the glad tidings con­cerning the Messiah” (III/IV, Art. 6). The point is that gospel preaching is needed for salvation. Nothing else will bring anyone to faith in Christ. God’s Spirit saves the elect by means of preaching. The Spirit of God works where the Word of Christ is faithfully preached and heard. The Word must, therefore, be proclaimed throughout all the world.

Closely related is the fact that the Canons also point out what the content of gospel preaching must be. Man’s sinfulness and sin must be proclaimed (III/IV, Arts. 1-6). The call of the gospel must be issued, namely, the call to repent and believe (II, Arts. 5-6). The good news of salvation must be declared (II, Art. 5; III/IV, Art. 6). All of this bears directly on the church’s mission work. The Canons teach what must be the content not only of a pastor’s sermons in an established congregation but also of missionary preaching.

Missions is to preach promiscuously

More significantly, the Canons of Dordt give an explicit call to the church to do mission work. Among the Three Forms of Unity, the Canons is the only creed to do this. This more than anything else proves the missionary character and missionary usefulness of this creed.

The Canons orders the church to go out into the world with the gospel. That order is found in Head II, Article 5, which reads:

Moreover, the promise of the gospel is that whosoever believeth in Christ crucified shall not perish but have everlasting life. This promise, together with the command to repent and believe, ought to be declared and published to all nations and to all persons promiscuously and without distinction, to whom God out of His good pleasure sends the gospel.

Who can deny that this call to missions is in full har­mony with the biblical commands concerning missions? Even if no other passages in the Canons either taught or implied anything regarding missions, Head II, Article 5 would be enough to prove that the Canons promotes mission work.

The word “promiscuously” is key here. This means the preaching must go far and wide, to every land and nation under heaven. This must be done by the church “without distinction.” God is not a respecter of persons (Acts 10:34). The church must not be such in her mis­sion work either.

God’s purpose is that the promiscuous preaching of His Word will be used by Him to bring the elect to a conscious faith in Christ. The church and missionaries do not and cannot know who the elect are. They must, therefore, preach God’s Word to all to whom God gives them opportunity. In this way the elect will hear that Word and will, by the power of the Spirit, be saved.

Missions and God’s election of a catholic church

Another way in which the Canons speak to and promote mission work is by what it states concerning God’s election of a catholic or universal church.

Another statement concerning the catholicity of the church is found in Heads III/IV, Article 7. There we read: “This mystery of His will God discovered to but a small number under the Old Testament; under the New (the distinction between various peoples having been removed) He reveals Himself to many, without any dis­tinction of people.” This clearly reflects the historical record of the church’s mission work in the book of Acts. The promise of the gospel was proclaimed by the church to Jews as well as to those who were afar off (Acts 2:39). The book of Acts records the apostles faithfully preaching the good news, not only in Jerusalem and Judea, but also “unto the uttermost part of the earth” (Acts 1:8). They traveled to the ends of the then-known world, pro­claiming the gospel as they went.

The Canons also mention the closely related fact that God’s election and thus God’s work of sending forth preachers is not on account of any worthiness in man. God does not elect and send His gospel to certain na­tions or individuals because “one people is better and worthier than another” (I, B [Rejection of Errors], Art. 9). This point underscores the fact that God is not par­tial to one or just a few nations, but elects a church from every land and nation under heaven. The church must preach the gospel, therefore, to the ends of the earth.

Another significant point made by the Canons is that God is absolutely sovereign over the mission work of the church.

God is sovereign over preachers and preaching. He determines who preaches the gospel, and to whom that gospel is preached. It is God who “mercifully sends the messengers of these joyful tidings to whom He will and at what time He pleaseth” (I, Art. 3). Those messengers of the gospel, through God’s sovereign directing, go to those “whom God out of His good pleasure sends the gospel” (II, Art. 5). The preaching of the gospel goes along the path that God has determined for it accord­ing to His good pleasure. When the gospel comes to anyone, it does so because of the eternal will and de­termination of God. God eternally decided who must hear the gospel. God sends it to them. And God is not arbitrary in this, for He sends preachers to those nations and places where He has His elect.

God is also sovereign with regard to the fruit of the preaching. The sinner does not search for and find God, but God finds and saves the sinner, that is, the elect sin­ner. The Canons state that “faith in Jesus Christ and salvation through Him is the free gift of God,” add­ing the explanation that the reason why “some receive the gift of faith from God and others do not receive it proceeds from God’s eternal decree” (I, Arts. 5-6).

The Canons also point out that it is God who has de­termined that the “saving efficacy of the most precious death of His Son should extend to all the elect” and “it was the will of God that Christ…should effectually redeem out of every people, tribe, nation, and language all those, and those only, who were from eternity chosen to salvation and given to Him by the Father” (II, Art. 8).

The Canons have much to say about God’s sovereign­ty. It is this truth that gives the church confidence in the work of missions. God’s sovereignty (in His decree, as well as in His governing all things) guarantees that there will always be fruit.

That fruit is sure, first of all, because of the decree of predestination. God will see to it that His elect are turned to Him by means of the Spirit and Word. None of them will go lost. No Reformed church, preacher, missionary, or church member needs to feel guilty (as the Arminians make their members feel) because he has failed to reach everyone in the world, as if it is his fault that some will perish in hell. No, God will make sure that His gospel reaches and is the means to save every last one who has been ordained to eternal life.

The fruit of missions is sure, in the second place, be­cause God sovereignly governs the preaching and its effect. The elect are saved, not merely “by the external preaching of the gospel, or moral suasion,” but because regeneration “is evidently a supernatural work, most powerful, not in­ferior in efficacy to creation or the resurrection from the dead” (III/IV, Art. 12). It is God who saves.

Let us, therefore, thank God for this valuable creed and for the Spirit’s work in leading the Synod of Dordt to speak as it did in the Canons of Dordt concerning the church’s important work of missions. 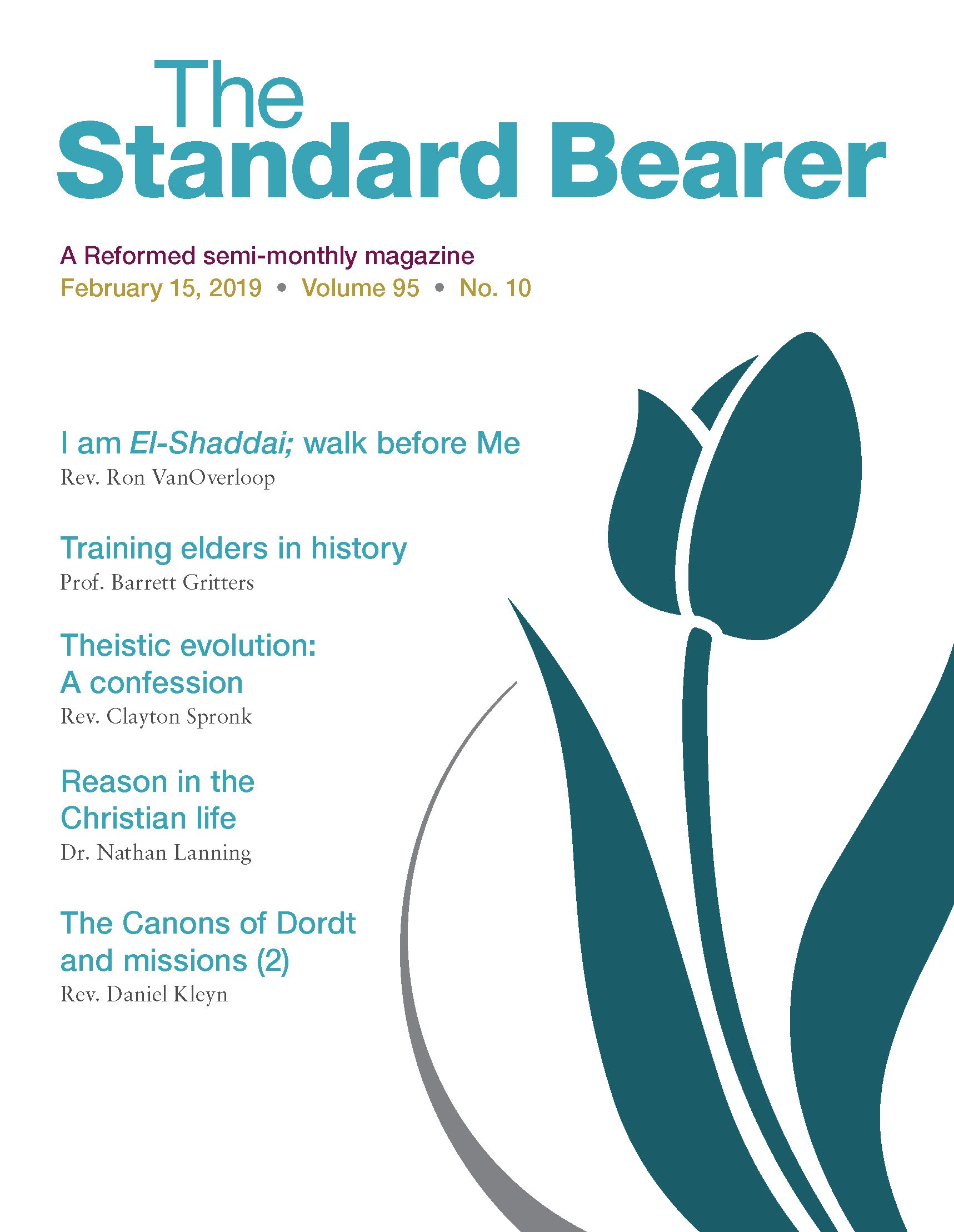