Article 12. This certainty of perseverance, however, is so far from exciting in believers a spirit of pride, or of rendering them carnally secure, that on the contrary, it is the real source of humility, filial reverence, true piety, patience in every tribulation, fervent prayers, constancy in suffering, and in confessing the truth, and of solid rejoicing in God: so that the consideration of this benefit should serve as an incentive to the serious and constant practice of gratitude and good works, as appears from the testimonies of Scripture, and the examples of the saints.

When we consider the contents of this article, we notice immediately that it presents nothing essentially new. Substantially the same argument was faced in the previous chapter of the Canons, Articles 15-17. Still more clearly, in connection with the doctrine of sovereign election, this argument was answered in Canons I, 12, 13. And as we noted also in the latter connection, the same argument is raised and answered in our other Reformed confessions. It is the age old argument that the doctrine of sovereign, efficacious grace denies the responsibility of man (of the Christian) and renders him careless and profane. Were it not so often raised, it would not have to be so often answered. But it seems that Arminians never tire .of the attempt to break down the bulwark of the Reformed faith with this old and worn-out weapon of calumny. Hence, we shall consider this answer once more rather carefully, especially since the article under consideration gives a rather detailed and forthright answer to the Arminian charge.

We may notice, in the first place, that while the general argument of the Arminians here is the same, namely, that this doctrine makes men careless and profane, this general argument is nevertheless made specific in this connection: the certainty of perseverance excites in believers a spirit of pride and renders them carnally secure. And the meaning of this charge is quite plain. The subject is, of course, the absolute certainty of perseverance of which the fathers have spoken in the preceding three articles. This certainty of perseverance, it is claimed, first of all, excites in believers a spirit of pride. The idea is that one who is filled with the joy and the certainty of his sure preservation is excited to exalt himself above others and from the heights of his assurance look down upon others. In the second place, it is charged by the Arminians, this certainty of perseverance renders believers carnally secure. Also this charge is well-known. It is claimed that because one has the certainty of perseverance he assumes the attitude that it is unnecessary for him to fight the spiritual battle of faith, that no matter what he does he is preserved in any case, that it is useless for him to walk in sanctification, and that, in fact, he should continue in sin that grace may abound. You may find a further description of this charge in this same chapter, the Rejection of Errors, Article 6, where the Synod rejects the errors of those who teach: “That the doctrine of the certainty of perseverance and of salvation from its own character and nature is a cause of indolence and is injurious to godliness, good morals, prayers and other holy exercises, but that on the contrary it is praiseworthy to doubt.”

The quotation just given also sheds light on the purpose of this evil charge. The design is to present the truth of the certainty of perseverance as an immoral doctrine and thus to discredit it. God’s truth and God’s way of salvation; of course, can never be immoral God, is holy. And therefore to teach something concerning the way of salvation that is inherently immoral would be an attack upon God’s own holiness. How could the holy Lord God provide an unholy way of salvation? And it is exactly the intent of this Arminian accusation to present the Reformed doctrine of the certainty of perseverance as a doctrine which leads inevitably to pride and carnal security, which is inherently injurious to godliness and good morals, to prayers and other holy exercises. We may say, therefore, that if the Arminian charge is true, it is certainly a powerful, yea, a compelling reason to discard the doctrine of the certainty of perseverance. We must certainly not hold to any doctrine that is inherently immoral. Such is contrary to every Scriptural idea of godliness and of sound doctrine.

What may be said, then, in reply to this accusation?

Before we take up the contents of this twelfth article we may make a few prefatory observations.

And then in the first place, we would point out that the strength of this Arminian argument may be destroyed by pointing to its origin. That origin is not Scripture, but sinful human reason. It has its origin in a mind and heart that is so bent on destroying and discrediting the truth of the Word of God in the minds of simple believers that it will not stop at anything to achieve its goal. What a simple matter it would be really, if the Reformed doctrine of perseverance was such a horribly immoral doctrine, to attack it and destroy it with the sword of the Spirit, which is the Word of God. Is not that the Scriptural method? And is not that method simple? Take any false doctrine: is there a single error among them all that cannot be gainsaid by the literal quotation of Holy Scripture? But the Arminian, when Scripture fails him, must lay the Word of God aside and come with his own sinful reason, unenlightened by the Spirit of truth and not illuminated by the light of divine revelation. No, it is not wrong to use one’s reason; and the use of reason is not rationalism. But it is wrong to posit the product of sinful, unsanctified, unenlightened reason over against the truth of God’s Word. And this is what Arminianism does, along with all rationalism. In fact, the Arminian chooses in this instance an argument that is almost literally placed by Scripture upon the lips of the enemies of the truth in the apostle Paul’s time. Cf.Romans 6:1, ff., Romans 3:7, 8. This by itself should be enough to discredit the accusation of these enemies of the truth. This apparently pious argument is as to its origin nothing but a pious fraud!

In the second place, it cannot fail to strike one’s attention that the argument presented in this article is entirely contrary to the whole tenor of this Fifth Head of Doctrine. Possibly the Arminian charge is true, but the doctrine of perseverance and the certainty of perseverance as it has been presented thus far has not sounded at all like an immoral doctrine. It sounds like the doctrine of those who are deeply concerned with the Scriptural principles of morality and godliness and who are above all mindful of the infinite perfection of holiness that is found in the God of their salvation and that characterizes all His dealings with the children of men. I ask you does this doctrine sound immoral as it is presented in Article 2, which speaks of the daily sins of infirmity and the spots that cling to the best works of the saints? Is it not the language of pious and holy men of God when this article emphasizes that these sins and spots furnish the saints with constant matter for humiliation before God, for flying for refuge to Christ crucified, for mortifying the flesh more and more by the spirit of prayer, for pressing forward to the goal of perfection? Is that immoral language? Does not Article 3 breathe an acute and deep consciousness of the reality of sin when it emphasizes that by reason of these remains of indwelling sin those who are converted could not persevere in a state of grace if left to their own strength? Does such language sound proud and carnally secure? Does not Article 4 emphasize the responsibility of believers to be constant in watching and prayer and also warn of the dangers connected with neglecting these? Does not Article 5 strongly stress that these enormous sins highly offend God and teach that it is only in the right way of serious repentance that those who fall into these sins can again enjoy the light of God’s fatherly countenance? And do not even Articles 6-8, which teach directly the Reformed doctrine of perseverance, after all emphasize very strongly the virtue of God’s holiness as characterizing His very work of preservation? God is not unholy, so that He preserves people who commit the sin unto death; but He exactly in His holy mercy does not allow His own to commit that heinous sin. The holy Lord God preserves in His people the incorruptible seed of regeneration. He by His Word and Spirit effectually renews them torepentance and to a sincere and godly sorrow for their sins. He causes them henceforward more diligently to work out their own salvation with fear and trembling. In His preserving work He manifests His own free mercy, His own immutable counsel, the merit, intercession, and preservation of Christ, and the sealing of the Holy Spirit. What, I pray you, is immoral and unholy about all this?

The same is true of the doctrine of the certainty of perseverance. This certainty springs from faith in God’s promises. It springs from the testimony of the Holy Spirit. It arises from a serious and holy desire to preserve a good conscience and to perform good works. It is the certainty of believers who struggle against carnal doubt, who face temptations, and who by the grace of God follow the way of escape from temptation, and who only in that way are inspired with the comforting assurance of persevering. Is this an immoral doctrine, a doctrine that is inherently opposed to true godliness and piety? The simple fact is that when one carefully and honestly reads these first eleven articles of Canons V, then the accusation raised and answered in Article 12 appears downright incongruous and ludicrous. One cannot imagine how anyone could have the evil courage to raise this argument against such a doctrine! 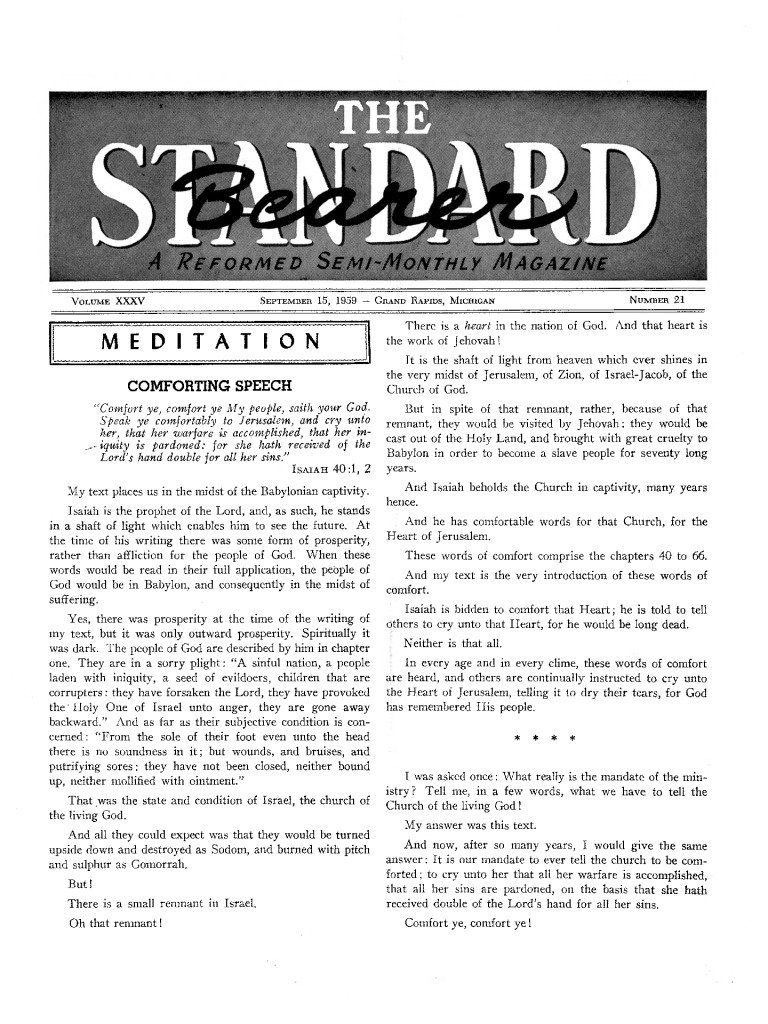