Article 11. The Scripture moreover testifies, that believers in this life have to struggle with various carnal doubts, and that under grievous temptations they are not always sensible of this full assurance of faith and certainty of persevering. But God, who is the Father of all consolation, does not suffer them to be tempted above that they are able, but will with the temptation also make a way to escape, that they may be able to bear it, I Cor. 10:13, and by the Holy Spirit again inspires them with the comfortable assurance of persevering.

As far as the translation is concerned we offer the following by way of correction: 1) “moreover” should be “meanwhile.” 2) “who is the Father of all consolation” could better be shortened to the appositive, “the Father of all consolation.” 3) The English version inserts a part of I Cor. 10:13 which was not quoted in the original Latin, namely, “that they may be able to bear it.” 4) The last clause should read: “and by the Holy Spirit he again awakens (excites) in them the certainty of perseverance.”

We should bear in mind that the primary purpose of this article is again to present the Reformed view of the assurance of perseverance over against the caricature of that Reformed view with which the Arminians attempted to burden the fathers in the eyes of the people. This explains in part why our fathers in this article go out of their way to explain what we would perhaps think is perfectly obvious and is a patent fact in the life of every Christian. After all, who does not know by experience that the Christian must struggle with various carnal doubts in this life? Who does not understand too that where there is doubt there is a proportionate lack of assurance? Who has not experienced that the child of God is placed in grave temptations and is the object of grievous attacks by the prince of darkness and his host? And what child of God who knows the Scriptures cannot mention instances of saints whose doubts and temptations and spiritual struggles are recorded in Holy Writ? Why then mention such an obvious fact? What is the need of it? The answer to this question; as we indicated above, is to be sought in the fact that the Reformed faith is here set forth in opposition to the Arminian caricature of that Reformed faith. The Arminians presented matters as though they, in distinction from our fathers, were the ones who truly believed the facts set forth in the first part of this article. They tried to make people believe that our Reformed faith does not take into account the realities of the Christian life, the reality of carnal doubts and temptations and spiritual struggles. They wanted people to believe that the Reformed view of the Christian in this life was. the picture of a saint that enjoyed a kind of carnal security, a saint who went happily on his way with never a doubt nor a fear, who had no battle to fight, who passed through no struggles of soul, who with never any interruption or spiritual wavering enjoyed the perfectly blissful assurance of his perseverance. They, the Arminians, were the realists! They knew and took into account these spiritual realities. They understood quite well that such assurance was a fanciful myth. They realized that the ordinary child of God had to struggle with various carnal doubts and that he frequently found himself in the tension of grave temptations. But these Reformed people who taught the sure perseverance of the saints and the certainty of such perseverance on the part of believers did not know life! They had no place in their view for the small, for the weak, for the struggling. They had a cold, unrealistic, unsympathetic doctrine! Such were the accusations which the fathers had to contend against and over against which they state the true Reformed view in this eleventh article.

Indeed this was a foul attack. And do not forget that the design of this attack was not concerned as such with the question of these doubts and temptations. No, the Arminians meant to destroy the Reformed doctrine of perseverance and of the assurance of perseverance. They meant to show that because the Reformed faith could not allow room for these spiritual realities in the life of the saint, therefore it could not possibly be the true doctrine. The nature of the argument is really the same as the argument which is used later on, namely, that this doctrine makes men careless and profane, and that because of this it is an immoral doctrine, which cannot possibly be true.

Now before we enter into the contents of the article, we may make some observations which may be of value in limiting and circumscribing the exact scope of this article. In the first place, we may say that this article certainly excludes from the Reformed family such as maintain that the saints in this life always enjoy the full assurance of faith .and certainty of perseverance. There are those who maintain this doctrine. There are those who will say that the true child of God never doubts, and that as long as he doubts he cannot be a true child of God. They are indeed proud people. They brashly lay claim to the assurance of faith and act as though it were below their spiritual dignity ever to entertain the least doubt or to have the slightest spiritual struggle. And they are people of a shallow soul. They do not know life. They do not know themselves. They have but a very shallow conception of their own sin and of their own sinful nature. They exalt themselves above such eminent children of God as David and John the Baptist and Peter and Paul. Their doctrine, moreover, is a stumbling block to the true, though weak, believer. When the latter considers himself in the light of such a doctrine, he can only come to the conclusion that he is riot a child of God. He is not helped and comforted by such a doctrine. He is only pushed deeper into the slough of despair and hopelessness. Hence, let it be well understood, as our fathers also make plain here, that this doctrine has nothing in common with the Reformed faith. The Reformed faith wants nothing of such a view. That view would indeed give justification to the Arminian charge mentioned above. But Reformed doctrine rejects that view and repudiates the charge. In this respect, while we must remember that this article was not written as such against this doctrine, but against the Arminians, it nevertheless constitutes a healthy warning against such an improper view of assurance.

In the second place,—and at the opposite pole as far as limiting the scope of this article is concerned,—we must observe that the purpose of this eleventh article is not at all to give aid and comfort to those who would present a state of doubt as being normal for the Christian, and who would even teach that such doubt is a kind of special mark of piety. There are also such. And it is difficult sometimes to determine which is more repulsive and nauseating, the former view or the view which glories in doubt. Both views are essentially proud. The former view proudly imagines that the Christian never doubts; the latter view presents doubt as a special mark of piety, is really proud of doubting, and pictures the saint who has the least degree of assurance as really impious and vain, and delights in causing children of God to continue in their mournful misery. But no more than the Reformed faith as set forth in this article allows room for the first view, no more does it intend in the slightest degree to foster the second view. Bear in mind that the fathers do not speak, in the first place, of chronic doubting, but of various carnal doubts. Notice, in the second place, that the article does not set its stamp of approval upon these doubts and temptations, but simply mentions them as facts in the Christian life. Observe, in the third place, that the article takes the fundamental position that doubt is sin. It does not and cannot arise out of faith. It is the opposite of faith. For notice that these doubts are characterized as “carnal.” And notice, too, that temptations certainly are authored by the tempter, the devil and his cohorts. And keep in mind, in the fourth place; that the article itself presents these doubts as something against which the believers have to struggle. Now that struggle certainly implies that doubt is not pious and that the Christian does not and ought not to delight in his doubts. For one only struggles against that which is not good, against that which must be overcome. To live in doubt and to delight in doubt and to consider doubt as a mark of piety, therefore, is certainly wrong. And to wait in the midst of one’s miserable doubting for some kind of special and direct assurance from heaven, while continuing in one’s doubt and while ignoring the God-ordained way of assurance described in Article 10, is tantamount to tempting the Almighty. No, to doubt is not pious; but to struggle against doubt is pious and is also necessary and normal in the life of the Christian here below. Hence, to sum up our second observation, the view that doubting is normal and even pious is both spiritually sickly and un-Reformed.

The contents of this article are not difficult to understand for the simple reason that they are a matter of experience for the child of God in the midst of the world. Besides, this same matter has been referred to in the earlier articles of this Head of Doctrine. In Articles 1-5 especially much attention was devoted to the realities of the remains of indwelling sin in the Christian, to his deviations from the guidance of divine grace, and to the temptations against which he has to watch and pray and into which he sometimes falls deeply. Especially in connection with Article 4 we have enlarged on some of these matters; and we refer the reader to this earlier material. The difference is that here, in Article 11, the fathers treat these doubts and temptations in their relation to our assurance of perseverance. And this is indeed a worthwhile and spiritually valuable subject to consider. Only we must remember that all that is stated here with respect to the loss of and the regaining of this assurance is based squarely upon what our Canons teach concerning the grace pf perseverance and the manner of its operation in Articles 6-8. In other words, one cannot have the proper view of his temptations and struggles in relation to his assurance unless he has a correct view of the grace of perseverance (preservation) itself in relation to the remains of indwelling sin in the Christian. The latter is the foundation of the former. This accounts for the fact that just as you find a relation of contrast between Articles 1-5 and Articles 6-8, so you find that same contrast in regard to assurance within this very article: “. . . . believers in this life have to struggle . . . and are not always sensible of this full assurance of faith . . . But God . . . .” In other words, with application to our assurance of perseverance, the fundamental truth of this article is that of the opening words of Article 4: “. . . . the weakness of the flesh cannot prevail against the power of God.”

To this we will call attention in detail in a following article. 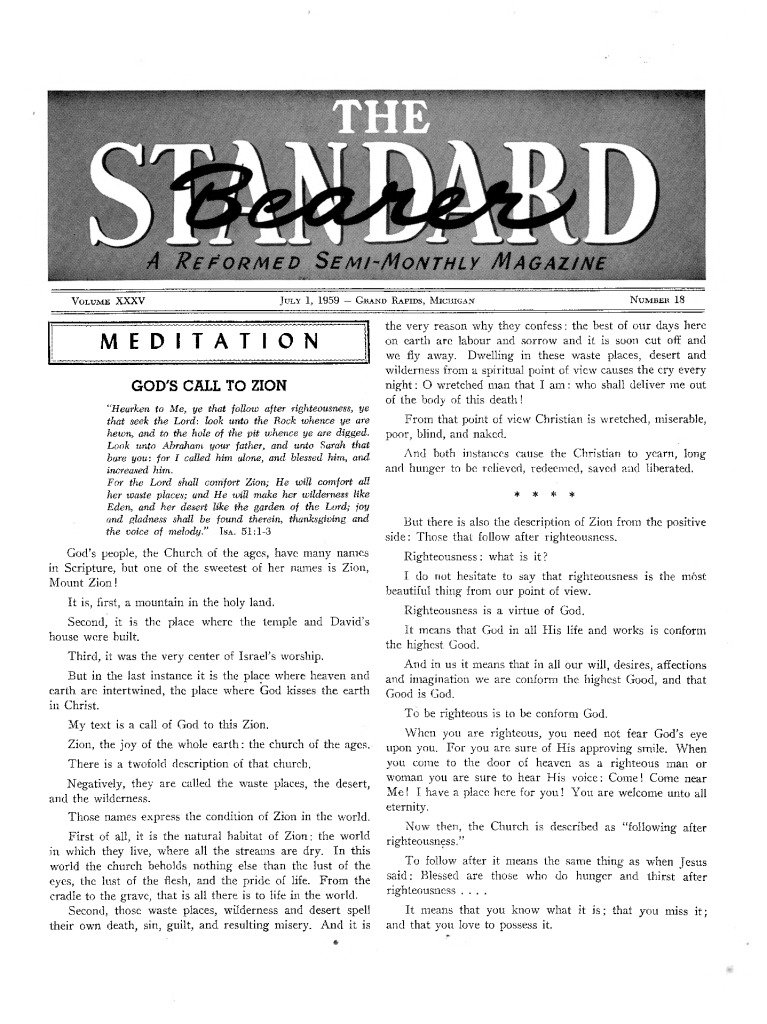