The Calling of our Protestant Reformed Churches to be Specific (3)

The Calling of our Protestant Reformed Churches to be Specific (3)

We are in the process of answering the question: in what sense are we called to be specific?

To be specific is not the same as being distinctive. It rather implies and presupposes that we are distinctive, that we do occupy a singular position as churches. And it means that in clear, pointed, unambiguous, exact, and antithetical language we give expression to our distinctive Protestant Reformed position.

Last time we emphasized that we are called to be specific, in the first place, in distinction from and over against all modernism and the modernistic church.

Narrowing things down further, we now emphasize that it is our calling to be specific, secondly, in distinction from what may be termed orthodox Christianity in general.

By orthodox Christianity in general I mean the church in as far as it still confesses the great truths to which I referred in my May 15 editorial, the truth that the Bible is the inspired Word of God, the truth of the vicarious atonement of our Lord Jesus Christ, the truth of Christ’s Godhead, of His incarnation, of His bodily resurrection, of His personal second coming, the truths which modernism denies and grossly distorts. This orthodox Christianity is represented by those who stand, generally, on the basis of the Apostolic Confession, who distinguish themselves, as we do, from the modernists. In fact, they often emphasize the great truths of historic Christendom.

There is, of course, a very broad spectrum of churches included in this second classification. Included are those who are sometimes referred to as Fundamentalists, a name that has somewhat fallen into disuse in our day, but which was and is used to refer to those who hold to the “fundamentals” mentioned above, and that, too, in distinction from the modernists. In our day it has become more common to refer to a very broad class of churches as “evangelical.” And in recent years there has even been a distinction made between “evangelicals” and “neo-evangelicals”—due undoubtedly, in part, to the fact that these very classifications are so broad and umbrella-like that they spontaneously require further classifications when various differences in the very broad class come to light. But in this classification one finds, of course, all kinds of Arminians, Baptists, Methodists, Dispensationalists, Pentecostalists, and even sometimes Roman. Catholics. And there is a wide variety of both denominational groups (sometimes very loosely connected and congregationalistic in polity) and independent or undenominational churches (who sometimes associate with one another without having formal ecclesiastical ties). Besides, in our day there are some break-away denominations who, though they have split from larger, mainline denominations which have become thoroughly liberal, do not themselves represent a thorough and complete return to their original confessions, but are little more than “fundamentalist” or “evangelical.” They are not distinctively Reformed or Presbyterian, but only in a rather general sense evangelical.

What does that mean?

It implies, of course, that we stand historically in the line of those great churches of the Reformation which trace their doctrinal and spiritual descent from the Reformation as it took place under Calvin. And this, in turn, implies that we emphasize especially two great truths. The first is the truth of the absolute sovereignty of God in the salvation of His people. Fundamental here is the truth of sovereign, double predestination. This truth is the heart of the church! As Reformed, therefore, we are—and are called to be—specific over against all Arminianism. This is important: for so-called orthodox Christianity today is simply shot through with Arminianism. As soon as one steps outside of the rather limited sphere of Reformed churches today, the degree to which he finds Arminianism in the churches today is simply appalling!

The second of these great truths is the truth of God’s covenant. This is a central truth. It is the truth that God establishes His covenant of friendship with believers and their seed, with His elect, in the line of continued generations. Reformed it is to maintain this truth, and to do so in distinction from all Baptists and dispensationalists.

To be specific in this respect is our calling. 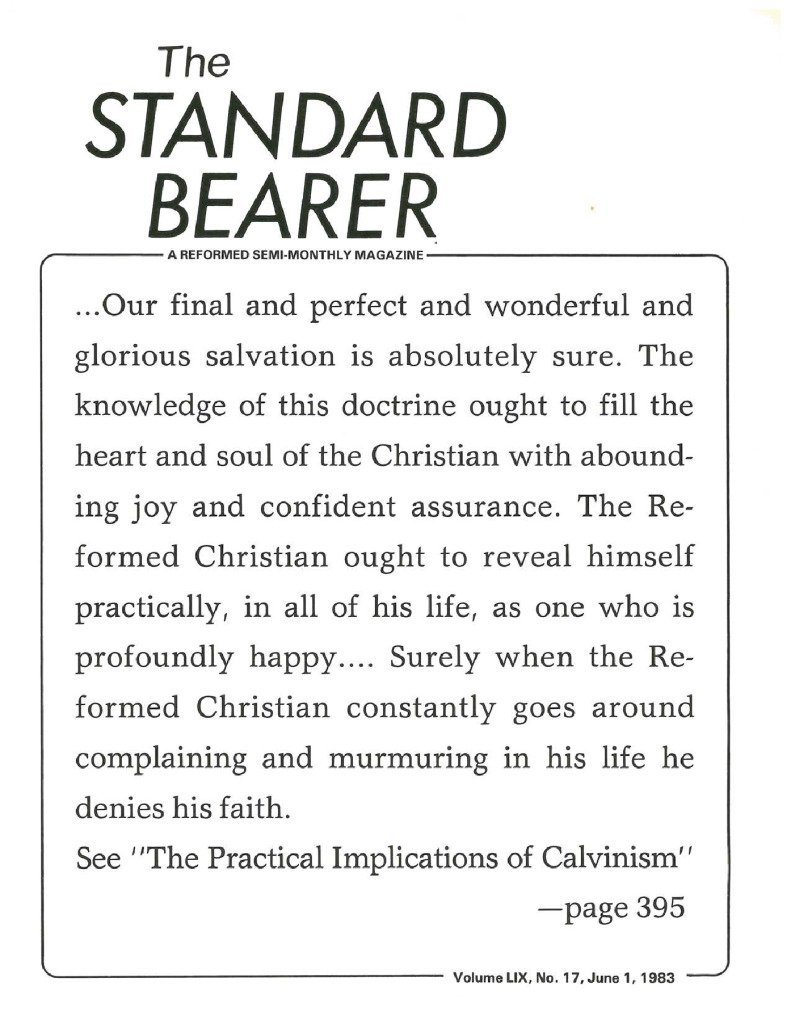