The Burden of Jesus’ Blood

The Burden of Jesus’ Blood

Article 5. Who teach: That without a special revelation we can have no certainty of future perseverance in this life. For by this doctrine the sure comfort of the true believers is taken away in this life, and the doubts of the papist are again introduced into the church, while the Holy Scriptures constantly deduce this assurance, not from a special and extraordinary revelation, but from the marks proper to the children of God and from the constant promises of God. So especially the Apostle Paul: “No creature shall be able to separate us from the love of God, which is in Christ Jesus our Lord,”

And John declares: “And he that keepeth his commandments abideth in him, and he in him. And hereby we know that he abideth in us, by the Spirit which he gave us.”

We have no significant corrections to make in the above rendering of this article. However, apart from our usual remark that the Scriptural quotations should consistently follow the Authorized Version, we have a few minor corrections which may at the same time serve to make the article a bit clearer and more emphatic. 1) The first sentence is more emphatic in the original: “That no certainty of future perseverance can be had in this life without a special revelation.” 2) The second sentence is: “For by this doctrine the solid comfort of the true believers in this life is taken away, and the doubt of the papists (literally: those adhering to, or pertaining to the pontificate) is reintroduced in the Church.” 3) The third sentence is more literally: “Indeed the Holy Scriptures throughout derive this assurance, not from a special and extraordinary revelation, but from the proper marks of the sons of God and from the most faithful promises of God.” In connection with the last phrase we may remark that the Dutch translates by “de zeer standvastige beloften Gods.” The original Latin has: “constantissimis Dei promisionibus.” The idea is not that of constant in the sense of “repeatedly given,” but constant in the sense of “unchanging, steadfast, immovable, faithful.” And this is emphasized: these promises are “most faithful.”

This is a very peculiar article, or rather, the article speaks of an error which is very peculiar and strange in the mouth of the Arminians. But perhaps it is not so strange that heretics would use one error, or even to a certain extent make an appeal to one truth, in order to defend and cover up their fundamental error. For this is what they do in the present instance by their statement that no certainty of future perseverance can be had in this life without a special revelation. Let me attempt to make this plain.

In order to do this, I must point out, first of all, that it is certainly not the intent of the Arminians to maintain that the certainty of future perseverance is possible as a general rule, that is, for all believers. They would perhaps maintain that there were a few believers who attained this certainty, and who did so by means of a direct and personal revelation from God. They almost had to maintain this, that is, that there were at least some of the saints in the past who had this assurance, in the light of Scripture. For there surely were saints who were told that they were saved and that they would be saved, and who through God’s direct Word to them had this assurance. They also spoke of this assurance. Nevertheless the Arminian would maintain that this is the rare exception. And his general tenet is that the certainty of future perseverance is impossible, that it is by no means everyone who can say with the apostle Paul, “I am persuaded that . . . no creature shall be able to separate me (us) from the love of God, which is in Christ Jesus our Lord.” The general purpose of the Arminian is to teach that perseverance is not certain, but conditional and uncertain, and that therefore the certainty of future perseverance is impossible. Yet consider now that in the article under discussion he nevertheless posits the possibility of such assurance of future perseverance, concedes it at least by implication, though he hastens to add that it is possible only by special revelation. And he does this all with the intent of destroying the general truth. That is a very wicked and corrupt business, a playing around with the truth!

Consider, in the second place, that the Arminian very piously makes an appeal to the idea of special revelation here. Of course, even this he corrupts, as we shall see presently; but nevertheless he attempts to make such an appeal. He means, of course, to say that no one could possibly know and be assured of the fact that he will persevere to the end unless God Himself directly and personally told him so. Again, I remind you in the meantime that the Arminian does not want to teach that God as a rule thus assures His people. The very opposite is the case, according to him. Nevertheless this is a piece of hypocritical piety. For by implication he presents matters as if perseverance and the assurance of perseverance are after all God’s doing, and as if after all only God therefore can supply such certainty of future perseverance. The Arminian does this and is compelled to do this because the Scriptures plainly teach that there were saints who had such assurance and who indeed received that assurance from God Himself, just as His people always do. But mark you well, that is not the Arminian doctrine at all. The Arminian does not teach that God is the author of our perseverance and of the assurance thereof. The very opposite is true. Perseverance, according to him, is dependent upon the will of man; and man is the real author of his own perseverance. Hence, also, according to the Remonstrant, the only assurance of perseverance there is that which depends on a changeable and uncertain condition. That is the Arminian position as to the assurance of election, and it is also his fundamental position as to the assurance of perseverance. Perseverance the work of God? God the author of assurance of future perseverance? The Arminian wants nothing of it! Special revelation, whose author is divine? The Arminian does not acknowledge it or its authority. That, by the way, is quite basically characteristic of Arminianism also today â€• I mean not only in regard to this particular error in Article 5, but generally in regard to the truth of the Word of God. After all, the most basic fault of Arminianism is that it will not bow before the Word of God, will not acknowledge its authority. If it did, to put it somewhat paradoxically, Arminianism would become Reformed. The Arminian would then acknowledge the same truth we do: for the authority of that truth is the Word of God, God Himself. And so the peculiar thing comes to pass that you find so many so-called fundamentalists, who as a general rule are Arminian, who wage a continual warfare against modernism’s denial of the infallible authority of the Scriptures, but who themselvesâ€•when it comes to the content and teaching of those Scripturesâ€• refuse to bow before its authority. It reminds one somewhat of what the Lord Jesus said of the scribes and Pharisees that “sit in Moses’ seat.” He warned: “All therefore whatsoever they bid you observe, that observe and do; but do not ye after their works: for they say, and do not. For they bind heavy burdens and grievous to be borne, and lay them on men’s shoulders; but they themselves will not move them with one of their fingers.” They attempt to lay upon the shoulders of the modernist the burden of acknowledging the authority of Holy Writ; but they themselves will not move that burden with one of their fingers! To put it otherwise, when Arminian fundamentalism accuses modernism of denying the authority of the Scriptures, it is truly a case of the pot calling the kettle black. Let Reformed people beware of those who like to say, “The Bible says . . .,” and, “Jesus says . . .,” but who after all deny the teachings of Scripture. They are deceitfully dangerous!

But, in the third place, the Arminian, by implication at least, propounds a false idea of special revelation here. He makes the false mystic his theological bed-fellow. The false mystic is characterized by a belief in so-called special revelations rather than in the only “special revelation” of the Word of God, of which Holy Scripture is the written record. He believes that God speaks, apart from the Scriptures as such, by inner whisperings of the Spirit and by dreams and visions and special signs and heavenly interventions. And he can sometimes concoct the most weird “revelations” imaginable. But this is not the peculiar trait of Arminianism at all. Arminianism is rationalistic: its position is arrived at in the way of mere human reason, and it exalts human reason above the Word of God. Mysticism lives by feeling, inward enlightenment, special revelations. And yet it is again not so strange that Arminian rationalism and false mysticism go to bed together. For they are fundamentally agreed in their denial of the authority of the only “special revelation” of Holy Scripture. And so it is not unusual either, practically speaking, to find a tendency toward such false mysticism in many Arminian circles.

We could not refrain from the above observations in connection with the underlying tone of the error treated in this article. Now, however, let us return more directly to the matter at hand.

The error that is rejected here we have already treated in the remarks made above. We need not say more on that score.

We must, however, still give our attention to the answer of the fathers. 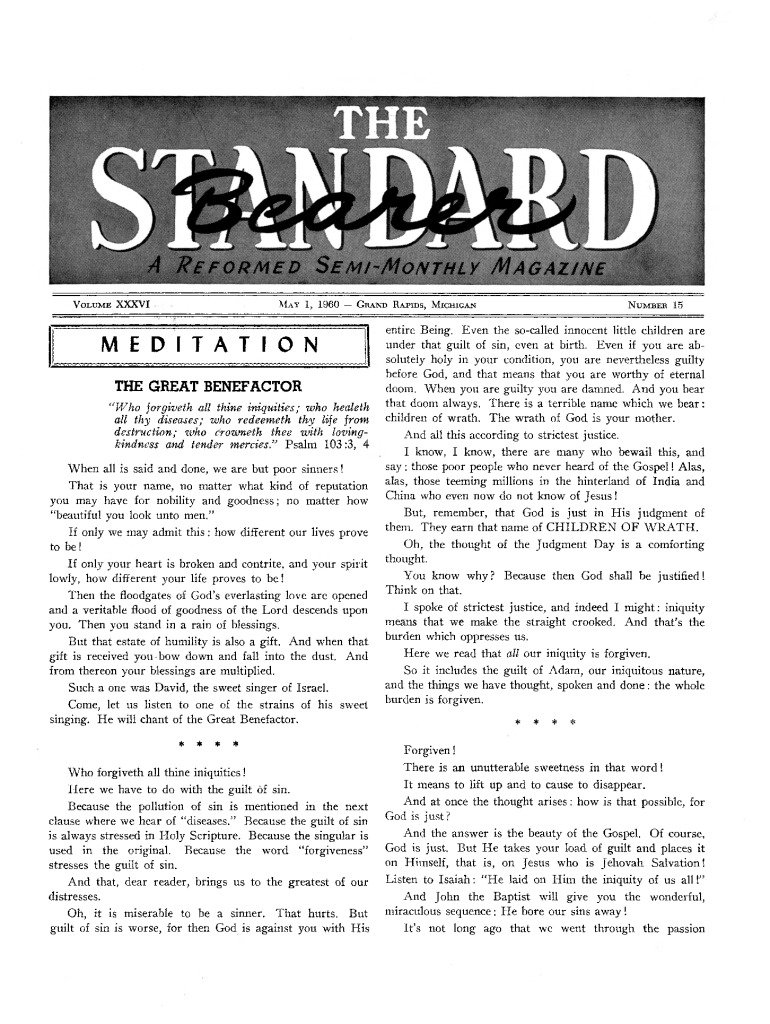