The Bribing of the Guard

The Bribing of the Guard

Now when they were going, behold, some of the watch came into the city, and shewed unto the chief priests all the things that were done.

And when they were assembled with the elders, and had taken counsel, they gave large money unto the soldiers,

Saying, Say ye, His disciples came by night, and stole him away while we slept.

And if this come to the governor’s ears, we will persuade him, and secure you.

As they proceeded to the sepulcher, two unusual things happened. There was a great earthquake. At the same time an angel descended from heaven and rolled away the stone that sealed the entrance to the sepulcher. The women did not see the angel. But the guards posted to secure the sepulcher did. And they fled in fear.

As the women proceeded to the sepulcher and were told of Jesus’ resurrection, these guards returned to the Jewish leaders to tell what had happened. After conferring among themselves, the Jewish leaders bribed the guards to say that Jesus’ disciples had stolen His body while they slept. This story spread abroad with the result that many of the Jews believed it, even at the writing of this gospel some 30 years later.

How strong the power of unbelief, in blind men, to the obvious fact of the resurrection!

Thank God for the faith to believe the resurrection of Jesus!

The day after Jesus’ crucifixion, the chief priests and the Pharisees went to Pilate requesting a detachment of Roman soldiers to guard Jesus’ sepulcher. They had remembered Jesus’ words that He would rise again the third day. Jesus had spoken of His resurrection at the first cleansing of the temple: destroy this temple and in three days I will build it again. Although the Jewish leaders had falsified Jesus’ words all through His ministry, they knew all along the meaning of what Jesus had said. However, Jesus’ own disciples had not understood. Neither had they anticipated Jesus’ resurrection, even though Jesus had spoken often to them of His impending death and resurrection.

Sometimes the ungodly understand God’s Word better than does the church.

This only demonstrates that the unbelief is not a matter of ignorance but of sin.

The Jewish leaders were very uneasy. They had claimed the crucifixion of Jesus as a great victory. Nevertheless, they sensed that this victory was hollow. There were the three hours of darkness that had covered the land in the middle of the day while Jesus was on the cross. There was the violent earthquake that took place just as Jesus died. The veil of the temple had also been torn from the top to the bottom.

So the Jewish leaders approached Pilate. They put Jesus in the worst possible light. Jesus, they said, had been a deceiver, and they were afraid, now, that His disciples would steal away His body and claim a resurrection. Deep down, however, they feared a resurrection and desired a detachment of soldiers to guard the sepulcher.

How foolish! How can a detail of soldiers prevent Jesus’ resurrection?

Pilate consented. Evidently Pilate knew the futility of it all. He gave them their watch and encouraged them to make it as sure as they could.

So the soldiers sealed the sepulcher and set a watch.

The next day, the third day after Jesus’ crucifixion, these soldiers returned to the chief priests and elders.

It was a very strange and terrifying story the guards told the chief priests. Early that morning as the earth quaked yet again, an angel descended from heaven and rolled away the stone from the sepulcher. They were paralyzed with fear, so that they shook and became as dead men. Then, having come to their senses, they fled and now were come to report to the chief priests.

They gave them large (literally, enough) money to change their story. The soldiers must not tell the people what actually happened but must report that Jesus’ disciples came by night and stole away His body while they slept. The chief priests also promised protection should the matter come before the governor.

The soldiers took the money and did as they were told.

Obviously the Jewish leaders did not want the truth of the resurrection known.

There are several points here.

First, the report of the soldiers made it very clear that Jesus had risen from the grave. They spoke of the earthquake and the angel descending to open the sepulcher. This only confirmed the deepest fears of the Jewish leaders that Jesus’ word concerning His resurrection had just taken place. Notice that the leaders did not question the truthfulness of the soldiers’ report or doubt the fact of the resurrection. Had they doubted the report of the soldiers, they would not have bribed them to fabricate a different story. In fact, they never bothered to check the sepulcher to see whether Jesus’ body was missing. On the basis of the soldiers’ report, they took for granted that Jesus’ body was gone and that He had risen.

Second, without some credible cover-up, the fact that Jesus was raised would become generally known. There was the empty grave that soon would be well known to all. And then there were these soldiers that had been posted to keep the sepulcher. They would be called into question as to the empty grave. To save themselves they would blurt out what they had seen, confirming what the empty grave suggested. Concealing the fact of the resurrection therefore required a cover-up.

Third, the leaders did not want the fact of the resurrection known. Jesus’ resurrection was devastating for them. It verified all the claims that Jesus had made about Himself, that He was the Christ, the Son of the living God. Furthermore, it condemned the leaders who led the people to demand Jesus’ crucifixion. And finally it would turn the hearts of the people away from their leaders to believe on Jesus.

This only serves to point us to the great significance of the resurrection. What the Jewish leaders sensed at this point concerning the significance of Jesus’ resurrection is verified by the rest of the Scriptures and much more besides. Jesus, indeed, is the Christ, the Son of the living God, as He had claimed. Fifty days later, on Pentecost, as the Holy Spirit was poured out on the 120 disciples, Peter not only spoke about Jesus’ death and resurrection to the crowd that had gathered in amazement, but he also rebuked them: “let all the house of Israel know assuredly, that God hath made that same Jesus, whom ye have crucified, both Lord and Christ” (Acts 2:36).

But there is more, something that even the Jewish leaders did not understand.

Jesus’ resurrection is the seal of God’s approval on His death. Jesus died on the cross to atone for the sins of God’s elect church. The fact that God raised Jesus from the dead is God’s seal upon Jesus’ death, that He did in fact pay the price of sin and obtain a great salvation for the church.

Jesus’ resurrection also means that Jesus lives as our Savior. He lives to bring to us the salvation He has earned for us at the cross. We enjoy that salvation now through the work of the Holy Spirit in our hearts, and we will enjoy it fully in the day of His return when He raises us from the grave.

The outcome of the bribing of the guard was that many believed the message that the guards were paid to bring. Thirty years later this saying was still commonly reported among the Jews.

This is quite remarkable, especially in light of two things.

First, there is the fact that the story of the guards was absurd. Think about it. It was not just one guard who fell asleep at his post, but, according to this story, an entire company of soldiers fell asleep. Not very credible. Besides, had they all fallen asleep, how could the disciples steal away the body without awakening at least a few of the soldiers? And had the soldiers been sound asleep while the disciples stole the body, how could they know what had happened while they slept?

The second fact that makes it quite remarkable that the Jews believed the report of the soldiers is the fact that there was clear evidence of Jesus’ resurrection. Jesus appeared to His disciples ten times. And there was the outpouring of the Holy Spirit on Pentecost with three unusual signs. Peter indicated in a sermon to the amazed crowd that this was from the risen Christ. Then there were the miracles that Jesus’ followers did in His name. Finally, the disciples preached the gospel of the risen Lord even though this caused them much persecution and even martyrdom.

Why, then, the widespread acceptance of the preposterous story of the guards?

This power of unbelief was operating among the Jews with respect to the resurrection. Due to their unbelief they did not want Jesus. He spoke of things that unbelief always rejects. A heavenly kingdom rather than an earthly kingdom. God’s perfections and man’s sin. God’s sovereignty and man’s inability. All this led them to reject Jesus and, stirred up by their leaders, to crucify Him. But neither, then, did they want Jesus’ resurrection. A resurrection would only verify the truth of Jesus’ teachings. And so, in unbelief, they blinded themselves to obvious reality and believed the report of the guards.

The same thing is happening to this day. There are several absurd theories that are widely held even today to explain away the resurrection. Jesus never died on the cross but simply went into a coma and then came to in the grave, claiming a resurrection. This is known as the swoon theory. And there is the hallucination theory. Jesus’ disciples never did see Him after His death. His disciples only imagined that they saw Him. And, yes, the explanation that the guards were bribed to tell about the empty grave is widely believed to this day. The empty grave is explained as the deceptive work of His disciples, who stole His body away and claimed a resurrection. This is the falsehood theory.

By the power of the gospel of the resurrection, however, many do believe.

As many as are ordained to eternal life believe.

By that faith they embrace the resurrection of Christ and therefore also the atoning nature of His death.

In that faith they know the forgiveness of all their sins in Christ’s death. They enjoy a new life in Jesus’ resurrection. And they have a certain hope of eternal life in the day of Jesus’ return. 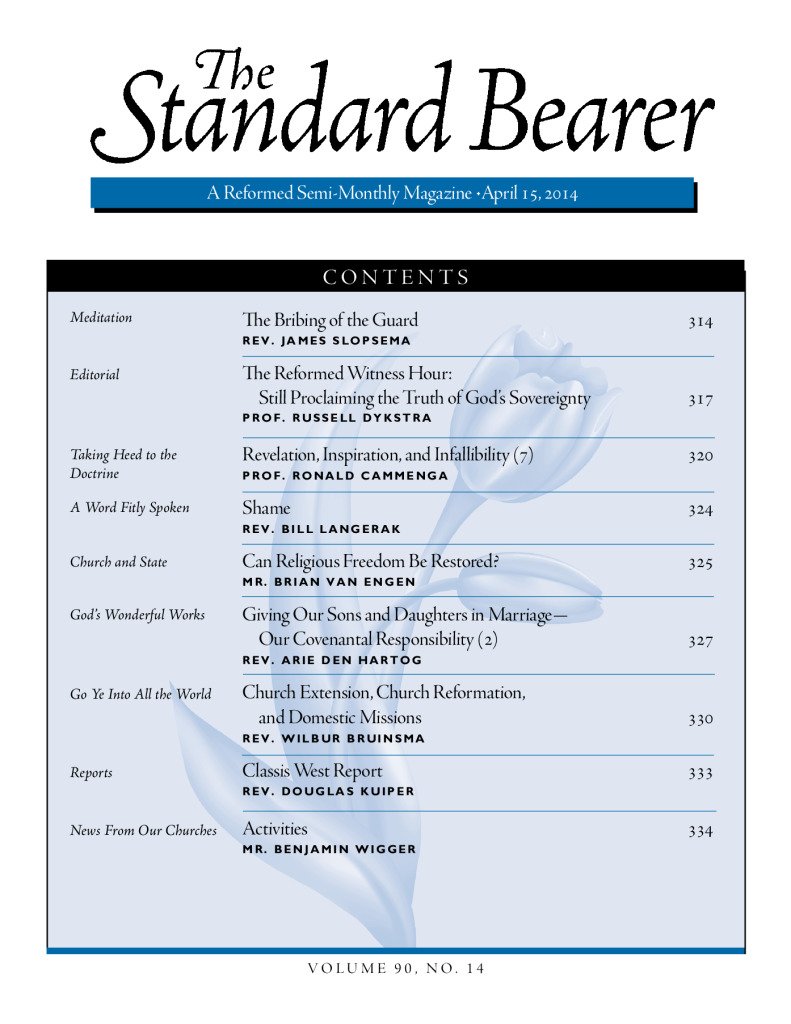