The Book of Revelation, Part Two, Chapter 8, The Two Witnesses

The Book of Revelation, Part Two, Chapter 8, The Two Witnesses

We receive the definite information that also at the time of the end, with the second coming of the Lord for the deliverance of His people, there shall be living saints who shall be changed in the twinkling of an eye, at the last trump. But it does mean, in the first place, that it shall be a time of general and terrible persecution for the faithful people of God. The acts and testimony of the witnesses have roused the anger of the Antichrist. Their testimony is now finished. Antichrist comes to silence it. And he succeeds. I imagine that he will succeed in two ways. In the first place, I do not doubt but that he will persecute the people of God in the literal sense of the word. He shall put them in prison and deprive them of their liberty and property. He shall kill some of them, especially of the ministers and faithful servants. But in the second place, the true church of God shall be declared dead: They shall be cast out of society. They shall be considered outlaws. They shall be left no standing room on earth. They shall be allowed to buy or sell no more unless they bear the mark of the beast. And literally they shall be forbidden to worship. It shall be a victory for the beast, and the church shall be heard of no more. The testimony, the prayers, the powers, and the actions of the two witnesses shall have been silenced and removed. The Antichrist shall reign supreme.

Thus we can at the same time understand what it means that their dead bodies shall lie in the streets of Jerusalem, the great city, that is spiritually called Sodom and Egypt. This cannot mean that two dead bodies shall lie in the literal sense of the word in the literal streets of Jerusalem. For it is inconceivable how in that sense’ all nations and tongues and tribes should look upon these two dead bodies. The text itself clearly shows again that something else is meant. Jerusalem is false Christianity, the false church, now united with the show church of hypocrites, trampling under foot the holy city and rejoicing over their victory over the church of God. The church still exists in their midst, but she is now dead. She has been declared dead. She has been silenced. And she is the object of greatest contempt all over the world. “Ye shall be hated of all nations” has now become literally true. And just as the lying unburied in. the street was symbolic of greatest contempt and deepest shame, so the church, silenced in her testimony, perfectly overcome, exists in the midst of Christianity as an object of extreme contempt and shame. Her power is gone. Her influence is no more. Her prayers are silenced. She cannot pray for plagues any more. She has been annihilated as far as her manifestation in the world is concerned. And all the world rejoices because she is dead. They rejoice and make merry, they send gifts to one another, only because the church that spoke of blood and judgment has been overpowered.

However, this is not the end of these two witnesses. On the contrary, we read in the text: “And after three days and a half the spirit of life from God entered into them, and they stood upon their feet; and great fear fell upon them which saw them. And they heard a great voice from heaven saying unto them, Come up hither. And. they ascended up to heaven in a cloud; and their enemies beheld them.” Let me call your attention, in the first place, to the fact that the tribulation is to last three days and a half. This implies, in the first place, that the time of the Antichrist shall be cut short. He shall not be able to finish his work, but shall be allowed only half a week. He shall not accomplish his purpose. Just as the time of this entire dispensation in general is indicated by three and one half years, or by time, times, and a half, so also the time of the end stands in the same sign. The power of Antichrist in its culmination of the little horn of the beast that cometh up out of the abyss shall be cut short. But it means, in the second place, that the days shall be shortened for the elects’ sake. This the Lord has promised definitely, and it is plainly indicated here. At the end of the three days and a half, the days of tribulation for the people of God shall be ended. But the time of the end is not there as yet. I do not know how I can make this more plain than by referring you again to Daniel. In the ninth chapter of that prophecy the prophet reveals to us the vision of the seventy weeks. Let me call your attention to the following facts, on the basis of this vision. First, that the seventy weeks as a whole indicate the period from Daniel to the end of time, when iniquity shall be finished. Secondly, that this period from the time of Daniel to the end of all time is divided into three smaller periods. The first consists of seven weeks, and reaches to the first coming of Christ. The second consists of sixty-two weeks, and reaches unto the time of the culmination of Antichrist, the twelve hundred and sixty days of the two witnesses, the building up of Jerusalem in the new dispensation. At the end of the sixty-two weeks we read that Christ shall be cut off and shall have nothing, which means the same as what is indicated in our text when it says that the witnesses are lying dead in the streets of Jerusalem. Thirdly, there is still one week left. That is the week of Antichrist, the week in which he shall reign supreme. But also in Daniel this week is cut in half. For in the midst of the week he shall have accomplished his work against the church, so that even the sacrifice and oblation has ceased. So also in our text that last period, the last week, shall be cut in half. 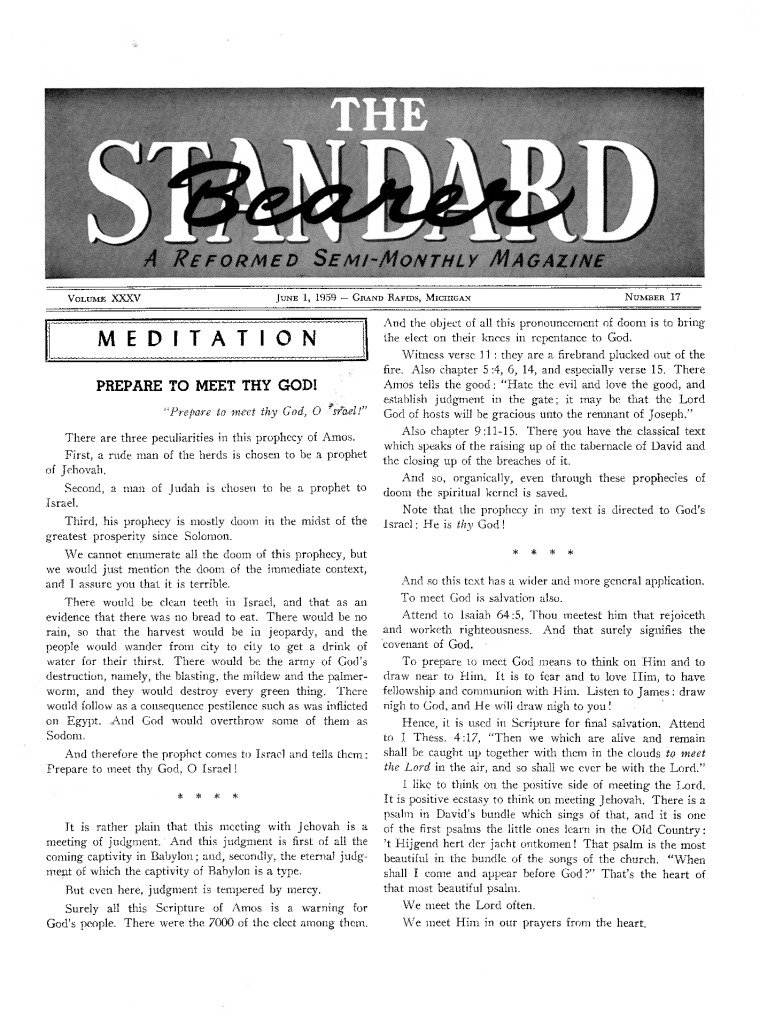