The Book of Revelation, Part Two, Chapter 11, The Power of the Antichrist

The Book of Revelation, Part Two, Chapter 11, The Power of the Antichrist

He has but one aim, and that is to thrust the Almighty from His throne, deprive Him of His sovereignty, and to be God instead of Him. And He therefore is the author and accomplisher of this power. And that he gives it his power and throne and authority would be sufficient to conclude that his kingdom and dominion is anti-God and anti-Christ in character. But this is also plain from other portions of the text. In the first place, let me call your attention to the fact that this beast has names of blasphemy inscribed upon his seven heads, that he received a mouth speaking great things and blasphemies, and that he actually opens his mouth to blaspheme the name of God and of His tabernacle, namely, those that dwell in heaven. To blaspheme the name of God is to deny His name, His sovereignty, His power, and all His virtues. Nebuchadnezzar was blaspheming when he said in the pride of his heart that he himself was the author of mighty Babylon. And so his kingdom and its head will blaspheme the name of the Most High. It will deny that God and His Christ have anything to do with that world-kingdom, and it will maintain that all that is in the world is the result of the power of man and the manifestation of his glory. In a word, it will try to expel the very name and authority of the Almighty from His own works. And the same it will do with the saints that have already gone into glory. It will deny that there is such a thing as glory in the hereafter. It will refuse to speak of it, and it will not tolerate to have it mentioned. It will banish their very remembrance. All that is connected with God and His name and His worship it will not tolerate.

Secondly, I would call your attention to the, fact that this power is its own god. They worship the beast: “And all that dwell on the earth shall worship him.” That is, again, in general all the inhabitants of the earth shall at that time worship the existing state of things, and centrally also the government that is at the head. They will put all their trust in the antichristian beast. They will expect the very necessities of life from him. They will turn to him in trouble. They shall worship and admire him and give divine honor and praise to him in gratitude of heart. They shall worship the beast and its image, and through it all they shall worship the dragon. Must I prove that this is the realization of all that has been pictured to us in the Scriptures concerning Antichrist? If so, let me first call your attention to still another feature. They shall make war with the saints. There are still saints on earth. And they shall be witnesses. They shall refuse to submit to the power of Antichrist. Not that they shall fight with the sword and rise in political rebellion. No, not that; but they shall refuse to worship the beast, and they shall uphold the sovereignty of the Almighty and of His Christ in those days. They shall refuse to change their religion and their worship and their testimony. And they shall maintain that not Antichrist, but Christ is King. And therefore they shall be hated. Then shall be fully realized what Christ said, “Ye shall be hated of all nations.” Antichrist shall make war with them and overcome them. They shall be hard days,—days so hard that the elect would not hold out if the days were not shortened. Days of persecution they are. We shall learn more about them in future discussions. Let it, now be sufficient to prove that this world power is anti-God and anti-Christ and anti-kingdom and anti-saints.

Thus Antichrist in its final consummation is pictured to us everywhere in the Word of God. In Daniel 7:25 we read of him: “And he shall speak words against the Most High, and shall wear out the saints of the Most High, and think to change the times and the law; and they shall be given unto his hand until a time and times and a half a time.” And in Daniel 8:23-25: “And in the latter time of their kingdom, when the transgressors are come to the full, a king of fierce countenance, and understanding dark sentences, shall stand up. And his power shall be mighty, but not by his own power: and he shall destroy wonderfully, and shall prosper to do his pleasure; he shall destroy the mighty ones and the holy people. And through his policy he shall cause craft to prosper in his hand; and he shall magnify himself in his heart, and by peace he shall destroy many; he shall also stand up against the Prince of princes; but he shall be broken without hand.” Or, still stronger, in Daniel 11:36 we read: “And the king shall do according to his will; and he shall exalt himself, and magnify himself above every god, and shall speak marvelous things against the God of gods; and he shall prosper till the indignation be accomplished, for that which is determined shall be done.” Or, to quote no more, turn to the New Testament and read what Paul says in II Thessalonians 2:3-4: “Let no man deceive you by any means: for that day shall not come, except there come a falling away first, and that man of sin be revealed, the son of perdition: Who opposeth and exalteth himself above all that is called God, or that is worshipped; so that he as God sitteth in the temple of God, shewing himself that he is God.” And again, in vs. 9 of the same chapter: “Even him, whose coming is after the working of Satan with all power and signs and lying wonders, and with all deceivableness of unrighteousness in them that perish.” Surely, there is no doubt about the fact that all these passages wonderfully harmonize with all that we learned about the beast that cometh up out of the sea, and that this beast is the anti-Christian power in its final and full consummation, and that it will consist of a wicked and universal world-power, with a central government, doing wonderful things, but rising against the Most High and against Christ and His people.

Finally, we probably may ask for the historical realization of this passage. Let me say, in the first place, that according to all Scripture that power as such is in the world already, and has been in the world all through this dispensation, as the power of Antichrist. The mystery of iniquity is already working, Paul warns. And John, writing to the Christians of his time, says: “Everyone that confesseth not that Jesus Christ is come in the flesh is not of God: and this is the spirit of Antichrist, whereof ye have heard that it cometh, and now is already in the world,” I John 4:3. And so, as I have also explained before, I take the period indicated in the text. Time is given to the power represented in the beast of forty and two months. In this period of his making or continuing his power I include all that has gone before, all the attempts that have been made to establish this world-power in opposition to Christ and His kingdom in the entire period of the new dispensation. It may very wells be that this forty and two months, of which we read more than once, now in the form of twelve hundred sixty days, now in the form of three and a half years, or times, now in the form of forty and two months, will in the future also have another meaning which we cannot now determine. But certain it is that it first of all points to this entire dispensation. For in this entire dispensation the power of iniquity and the spirit of Antichrist is already in the world. In this entire period the two witnesses give their prophecy. In this entire period the church is in the wilderness of her separation. In this entire period the beast that rises up out of the abyss and that culminates in this beast that is pictured to us in the present chapter is present. And therefore, let no man beguile you also in this respect. He is in the world already. He works in the world. He has made many bold attempts already to reach his culmination. And his final manifestation will be but the consummation of a long process of development.

But on the other hand, let me also warn you not to make the mistake of finding him already in his full manifestation and power. Never yet has there been a power as is pictured here. Never yet was there a universal world-power that had free sway over every nation and people and tribe and tongue. Never yet was there a nation whom all the peoples worshipped, never was there a kingdom or dominion that had power over all the forces and resources of creation, so that no one could even buy or sell in any part of the world except by the grace of this antichristian power. And this also applies to the present. Let no one beguile you. This anti-Christian power is not yet in its full reality. No single nation represents it. The world-power will not be realized by sword or cannon, so that there would be a tyrannical government lording it over a groaning lot of subjects. But it will be a kingdom or government established by common consent and agreement, in which all admire and worship the beast. And again, the war this government or dominion will wage is not against any world kingdom, but against the saints of the Most High that refuse to worship the beast. And such a power does not yet exist.

In the third place, let me also warn you that the time is at hand. We know not how soon, but soon it will be. All the signs of the times point to such a tremendous power, such a league of the nations that has control over all things, to such a unity of all religion, in which man is exalted and the Christ of the Scriptures is blasphemed and His blood trampled underfoot. And therefore I would say: the time is at hand! Watch therefore! Let no one beguile you; but watch!

Finally, if you ask why this complete picture of the Antichrist is given us in Scripture, my answer is: in order that we might clearly recognize it when it is revealed. And what then must we do when we see it is come? Must we oppose it, must we fight it with the sword? That, of course, is completely impossible. It will come: It must come. And to oppose its coming is entirely vain. Its coming is irresistible. And the battle is not one of the sword. But as the text has it, he that is for captivity, into captivity he goeth; and if any man shall kill with the sword, with the sword he must be killed. No, we cannot oppose the power of Antichrist by main force. When that world-power cometh and reigns supreme, we shall be submissive to the last, as far as God and our conscience permits. But here is the patience and the faith of the saints, that in all these times they remain faithful, and refuse to deny the Christ. They wait for the day of His coming. May God give us grace to be found faithful at all times, and watching and praying, so that no one may take our crown. 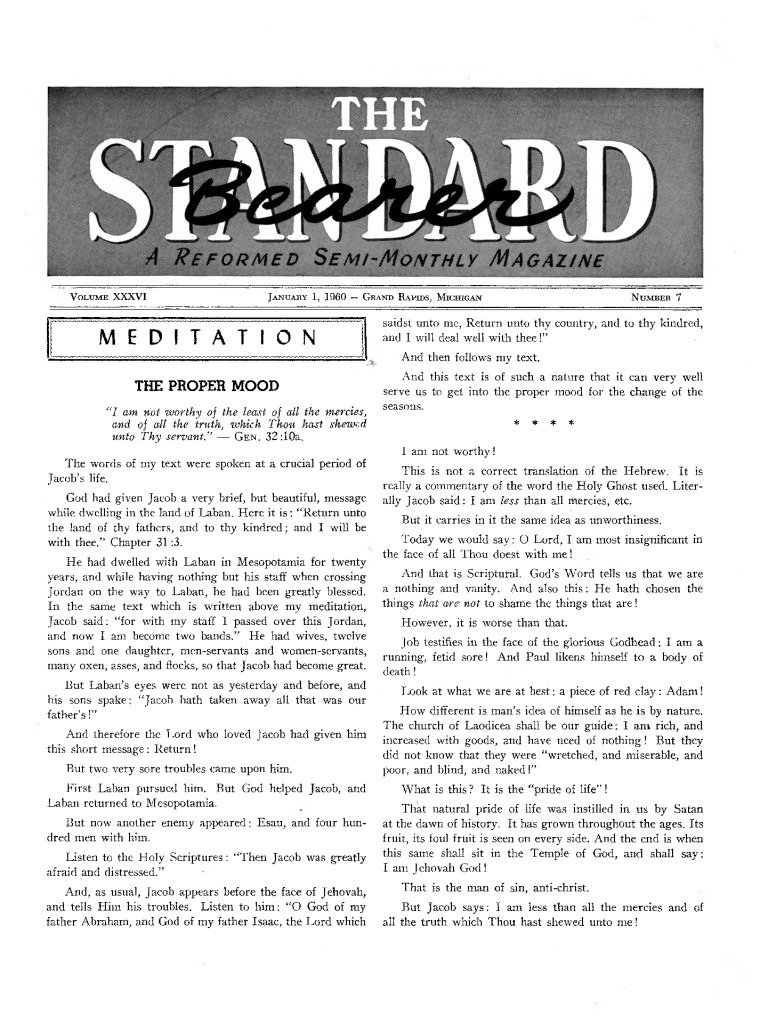