THE NECESSITY THAT THE HEAVENLY THINGS THEMSELVES BE PURIFIED—continued (Hebrews 9:23, 24)

The reason why the heavenly things themselves need to be sanctified, and that, too, with better things than mere sacrifices of goats and bullocks is clearly stated in the text. The Old Testament tabernacle and its sacrifices were mere “copies” of the real and heavenly. They were mere means to show by representation what the corresponding reality is!

These copies were sanctified by sacrifices of goats and bullocks on the annual day of atonement.

However, the heavenly things themselves also needed to be purified. Truly, it is not easy to conceive of this rather mystical presentation of this heavenly reality. We think of heaven as being pure and holy per se. Yes, the earth is in our conception the place where sin reigned. And thus, in our thinking, we make it difficult to conceive of this matter. It ought to be rather obvious, however, that the writer to the Hebrews is thinking, of heaven from the point of view of it being the place where a sinful people is to meet a holy God, and stand before His face. Heaven is God’s throne and the earth is His footstool. And heaven is here looked at from the view-point that it is where the throne of grace is. It is the place which was portrayed by the ark of the covenant, whereupon, on the great day of atonement, the blood was sprinkled on the mercy-seat. Here justice and mercy kissed each other. And, where this blood is sprinkled, sin is removed, and there is a new and living way to God. From the view-point of the people to whom the Mediator represents before the throne in heaven, heaven, and the very center of the heaven, as the place where the saints meet. God, must be purified as a place where God would have his rest with His people forever!

These heavenly things, and heaven itself, the dwelling-place of redeemed men and angels, must be cleansed with better sacrifices than these mere typical sacrifices! It must be done by the one sacrifice of Christ on the Cross, now in the end of the ages!

And what is the confirmation and evidence, that there was a better sacrifice necessary than those of the Old Testament dispensation? The convincing evidence is in the fact that Christ, the anointed high priest after the order of Melchizedek, has entered into the very heavens itself. The fact of Christ’s ascension from Mount Olivet is the proof. He has passed through the very heavens. He has entered into the holy place through (dia) his own blood. No, he did not enter into the holy place with his blood, but by means of His blood. Because of the suffering of death he is crowned with glory and honor! (Hebrews 2:9; Hebrews 9:11, 12: Philippians 2:8, 9 ff.) It is not so, that Christ’s priestly work began after his ascension, as was taught by Socinius. The atonement was accomplished on the Cross once and for all; the intercession is such that now he ever lives in the sanctuary to pray for us. (Hebrews 7:25; Hebrews 9:28). Although, therefore, Christ’s high priestly task did not begin after his ascension, yet it has a very strong seal of God in it that his sacrifice was the sacrifice which had the power to purify the heavenly temple itself. It is the real purification of the true, the real temple of God. Were this not the case Christ would not have been admitted into the most holy place of heaven!

This ought to sink deep into our souls! It must have required a better sacrifice than that of bullocks and goats. No earthly high priest ever entered into heaven itself to represent us. Who among mortals ever ascended where the angels cover their faces, and where the trishagion resounds day and night, and where the very cherubims cover their faces because of the glory! But we see Jesus crowned with glory and honor. It was for the suffering of death, tasting raw death at Golgotha! His sacrifice was the ticket to enter the heavenly portals!

Now may all the saints sing: Hallelujah. He went to prepare a place for us in heaven itself; it will be our dwelling-place forever. And his very presence in heaven is the evidence that He is the better sacrifice, the Lamb of God who taketh away the sin of the world! What was a necessity of the justice of God has now become a reality. Justice and mercy have kissed each other. The justice of God is satisfied in the better sacrifice!

Only thus, when God’s justice is satisfied, can the Christ appear before God for us.

CHRIST’S PRESENT MANIFESTATION BEFORE GOD FOR US. (Hebrews 9:24b)

The truth taught here in Hebrews 9:24b, is a tremendous argument. It is also a great consolation for the sinner as he seeks the throne of grace. It is the truth which Paul denominates with the “yea, rather.” Yes, Christ died, “yea rather, who is even at the right hand of God, who intercedes for us.” (Rom. 8:34) It is a further and greater benefit of the sufferings of Christ, and a sure indication that “God is for (huper) us.” He is for us in Christ! NOTHING shall separate us from the love of God in Christ Jesus! There is condemnation in respect to nothing in all the world . . . for us!

Not all have conceived of this appearance of Christ before the face of God in our behalf in the same way. We do have here the general notion of the advocate with the Father, Jesus Christ, the righteous one. (I John 2:1 ff.)

Modern theologians, who do not take the death of Christ seriously (Socinians, c.s.) consider it enough to teach that Christ’s intercession is nothing more than his continued intervention or agency in the salvation of his people. The Lutherans, at least many of them, insist that the intercession is vocalis (vocally) verbalis (verbally) and localis (locally). However, the Reformed theologians consider it enough to say: (1) Christ’s appearing before God in our behalf, as the sacrifice for our sins as our high priest, is done on the ground of his work; it is for this that we receive the remission of sins, the Holy Ghost and all the needed good things of salvation. (2) Due to Christ’s appearance before God for us we receive a defense against the sentence of the law, and the cruel charges of Satan, who is our great adversary. (3) Before the face of God Christ offers himself as our surety, not only that the demands of justice are met, but also that his people shall be obedient and faithful. (4) Christ presents the persons of those who are redeemed, sanctifying our prayers and all our services, rendering us acceptable to God, through the savor of his merits. (Compare: Hodge’s Systematic Theology, Vol. II, p. 592; Hoeksema’s Reformed Dogmatics, page 374. ff.; “Death Of The Son Of God,” page 114).

Let it not be forgotten that Christ went to heaven with this expressed purpose, according to the text. He must save us to the uttermost. All that he merited for us in his death on the Cross must be applied to his exaltation at God’s right hand, by means of his intercession for us before the face of God!

THE “ONCE” OF THE SUFFERING OF CHRIST (Hebrews 9:25, 26) Christ suffered for our sins, the just for the unjust, only one time. It never will be repeated. God does not ask payment twice. Justice satisfied cannot be undone! And Christ died at his own time for the ungodly. It was at the end of the ages!

The writer to the Hebrews draws a sharp contrast here. He contrasts the difference between the one sacrifice brought once (hapax) and the sacrifices in the Old Testament which were many. (pollakis) He is not merely stating a fact; rather he is arguing a certain point here. The point which he is making so very ably is that all the former sacrifices were a rather endless repetition; an annual event of a rite and service which was self-perpetuating in that it never was able to cleanse from the guilt and power of sin! The O.T. high priest came with the blood of one who was wholly other than the priest (alliotrioo). That priest did not and could not come with his own blood. Christ sacrificed Himself! Through the eternal Spirit he offers up himself to God. But, and this is the point of argument, Jesus did not come to offer up himself often! Had he had to offer himself only once more, then it would prove that he would be in the same class with the offerings of the Old Testament. We would need to see the Cross erected many times from the foundation of the world. He would also need to have died often. There is no offering without death and the shedding of blood. Had God required Christ to die once more—then God would have said: the Lamb must be delivered once more for the sins of the people! But in this case, Christ would have had to suffer often!

But no! The suffering of the Son of God was in these last days. Four thousand years had gone by. Many transgressions were committed under the first covenant; yea, from the time of the fall of Adam and Eve in Paradise. But all waited, waited! It must await this, the consummation of the ages, the fulness of times. Then the Son is born from a woman, and made under the law! And then he comes. He is now manifested in his true worth and value. He stands manifest up to the present moment as the complete and only sacrifice for our sins. The verb in the Greek is perfect passive: pephanerootai. God has set him forth a propitiation for our sins!

It is only “once” that Christ suffers!

The conclusion is that there is absolutely not any reason left for Christ dying twice!

Christ came to abolish sin. (eis atheteesin tees hamartias). He did exactly that! He entirely set aside sin, did away with sin! He abolished sin which had its inception in the heart of the Devil, the Father of the lie. He abolished, nullified sin altogether as it had come into the world through the sin of man, Adam! Sin is gone! It is no more. There is no more guilt of sin, and the power of sin is broken. He came and destroyed the works of the devil at Calvary! The Cross need; nay, may never more be erected. Standing in the end of the ages its towers over sin and death. What Christ died, he died once; what he lives, he lives unto God. 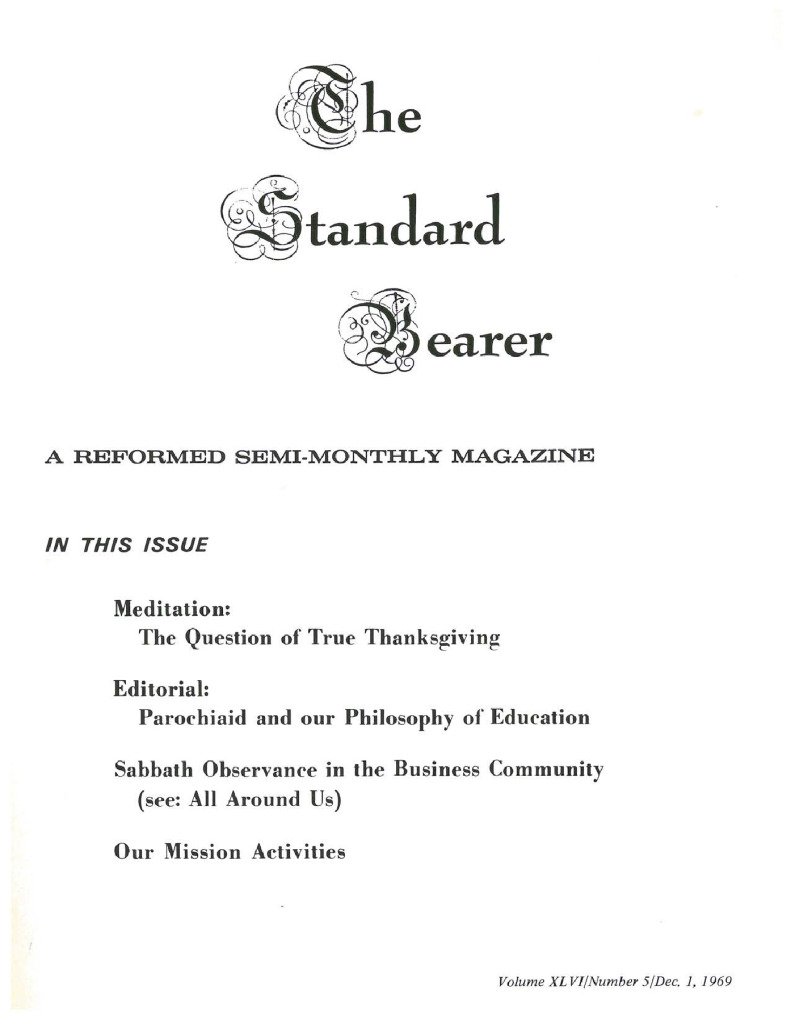