As far as the time is concerned the readers should already be teachers of others. But, alas, they are as those who must again be taught the first principles of the oracles of God. They have not yet attained unto “perfection.” They are not yet “teleioon,” that is, full grown men and women in Christ, who have come to spiritual maturity. They must not go backwards but forwards in their understanding of the truth in Christ!

The latter they have failed to do!

This means that they must not again lay the foundation. Not once more must the word of the beginning of Christ be preached to them and learned by them. Perhaps the “beginning of Christ” refers to the fundamental explanation of the fulfillment of the Messianic promises in Jesus Christ. These are the rudiments of the Christian life which are implied in the teachings of Christ. These lie in the realm of the subjective experience. But there is also the deeper background and divine purpose in this redemption in Christ which must be studied and believed so that we may press on to perfection. The former are the “milk” diet, and latter is the “solid food” diet, respectively for “babes” and for the “matured” Christian.

The milk diet is continually concerned with what the catechumens had learned and been taught. These truths are indeed the “foundation” and are necessary. However, when once the foundation has been laid, we do not lay it again. Then we must build upon this substructure the further instruction in the faith, and thus continue in the hope, firm to the end. Only when we continue to grow can we be firm to the end!

First of all in this “milk diet” is the foundation of “repentance from dead works.” The genitive case “foundation of repentance” is the genitive of identity. Repentance is the foundation in the life of the Christian. That is the beginning. The term “metanoia” is really an after-thought. It is a complete change of the entire conscious life as it proceeds from the heart. It is a new and basic attitude of love for God and for our neighbor and a hatred for sin and godly sorrow that we have sinned against God. It is positively true joy in God and that through Christ, with a delight to do the will of God after the inward man. What a solid foundation of new life in the reborn elect child of God!

This cleansing from dead works, by repentance, is the counterpart and fruit of “faith in God.” Without this “faith” it is impossible to please God. Faith is the substance of things hoped for, the evidence of things not seen. (Hebrews 11:1) This is faith in God, His Word and Promise in Christ Jesus, a drawing near in true faith to the throne of grace. It is walking in the new and living way, the blood-sprinkled way in Christ Jesus. These are the basic matters which we learn as the “beginning” in Christ.

Closely connected with the forgoing is the “teaching of baptisms.”! Perhaps the phrase here in question does not refer to a simple teaching of the meaning of Christian baptism, the New Testament sacrament. The plural seems to point in a different direction. “Baptisms.” Calvin interprets the plural as referring to the “solemn rites, or the stated days of baptizing.” He would interpret phrases “doctrine of baptisms, laying on of hands, resurrection of the dead and eternal judgment” in apposition to “repentance from dead works and faith in God.” In other words, if one continues in the first principles of Christ then the subjects in which we will ever continue are: doctrine of baptisms, etc. These teachings of baptism perhaps are the instruction concerning the difference between the old Testament “washings” as looking toward the Christ to come, and the New Testament Baptism as the washing of regeneration in Christ’s blood. At any rate this is known to be one of the “fundamentalia” in the Jewish synagogue. This quite likely took in the entire spectrum of the feast days and the special occasions. A great deal of time is absorbed in the teaching concerning baptisms. This all belongs to the rudiments. This is not solid food, but milk.

But what must we say about the meaning of the rite “laying on of hands” which is here mentioned. There are various passages in the New Testament where the rite in question is referred to. A brief but instructive article can be found on this rite and custom of the imposition of hands from the pen of Dr. James Orr in the International Standard Bible Encyclopedia, Vol. II, page 1335. Writes Dr. Orr, in part,

The act or the ceremony of the imposition of hands appears in the OT in various connections: in the act of blessing,

in the ritual of sacrifice (hands of the offerer laid on the head of the victim,

in witness-bearing in capital offenses,

The tribe of Levi was set apart by solemn imposition of hands,

Moses appointed Joshua to be his successor by a similar act,

The idea in these cases varies with the purpose of the act. The primary idea seems to be that of conveyance or transference, cf.

but, conjoined with this, in certain instances, are the ideas of identification and of devotion to God.

In the NT Jesus laid hands on the little children,

and on the sick,

etc., and the apostles laid hands on those whom they baptized that they might receive the Holy Spirit,

Specially the imposition of hands was used in the setting apart of persons to a particular office or work in the church. This is noticed as taking place in the appointment of the Seven,

in the sending out of Barnabas and Saul,

at the ordination of Timothy,

but though not directly mentioned, it seems likely that it accompanied all acts of ordination of presbyters and deacons, Cf.

The presbyters could hardly convey what they had not themselves received,

Here again the fundamental idea is communication. The act of laying on of hands was accompanied by prayer,

Acts 6:6, 8:15, 13:3,From the foregoing it is rather clear that the “laying on of hands” here referred to was a symbolical act in connection with the ordination of office bearers in the church. This, too, belongs to the rudiments. This, too, was one of the matters which belonged to the matters which are for those not exercised in the word. It belonged to the simple instruction of the catechumens in the church. It is denominated “milk” and not “solid food.” It is for babes!

Furthermore, the writer speaks also of the articles of “resurrection of the dead” and “eternal judgment.” Now these are really important articles of faith. However, when once learned we must not return to them and relearn them, but we must press on. This was taught to the most simple catechumens, prior to their public confession of faith. But the readers are far past this as “for the time!”

Hence, the readers must leave behind these teachings and be “borne along” to perfection. This perfection in Christ, the fuller understanding of the counsel of God in relation to the King-Priesthood of Christ, the writer will set forth. He cannot wait till the audience and readers are ready to receive it, and are no longer dull of hearing. Hence, he writes, “And this we shall do, if indeed God permit.” For the writer knows that the outcome and fruitfulness of his writing depends solely upon the will of God. Man can water, and he can plant; but the increase is of the Lord. And so the writer will indeed give the marvelous and profound interpretation of the priesthood after the order of Melchizedek, the Son of God of whom David had written “Thou are a priest forever after the order of Melchizedek.” (Psalm 110:4)

THE PERIL OF APOSTACY CITED AS A WARNING (Hebrews 6:4-8)

The writer states here a great warning which should shock the reader to his senses, including you and me. He is warning the Hebrew Christians against being spiritual dullards, and exciting them to be borne on to perfection. Such warnings form a necessary part of the preaching. This we have repeatedly noticed here in this letter to the Hebrews. (Compare Hebrews 4:7-4:13) We shall have further occasion to take note of these warnings in this book of Hebrews (See Hebrews 10:26-30) In these warnings we are dealing with the “means of grace,” that is, with the preaching of the Word as it is accompanied by the operation of the Holy Spirit. God has connected in His wisdom these warnings and the grace of obedience and the doing the will of Him as our sovereign Lord. And we would tempt God in the church if we were to separate these two, which He has in his wisdom joined together! (Confer Canons of Dordt, III, IV Heads of Doctrine, Article 17)

Preaching of the Gospel is such that it is the power of God in those who are saved. This power (dunamis) is such that it reveals itself in bringing forth faith in the elect. Thus the elect have revealed to them the righteousness of God out of faith unto faith. There is nothing which can stand in the way of this power. It is the power of God. (Romans 1:16, 17) It ever is the almighty and omnipresent power of God which makes the dead alive, and calls the things which are not as though they were. (Romans 4:17) Thus Abraham, the father of believers, was empowered in faith. There was nothing impossible with God. (Luke 1:37; Gen. 18:14)

Yet, here in the text under consideration, the teaching is that there are certain cases where something is “impossible” (adunatos) under the means of grace. It is impossible to “renew” those who were once enlightened and who fell away; it is impossible for such to be renewed unto repentance.

We may not know exactly how to interpret this text. Forsooth it is a knotty text exegetically. However, we do know that this was written for our warning that we shall give heed to the Word and press on unto spiritual maturity in Christ Jesus. 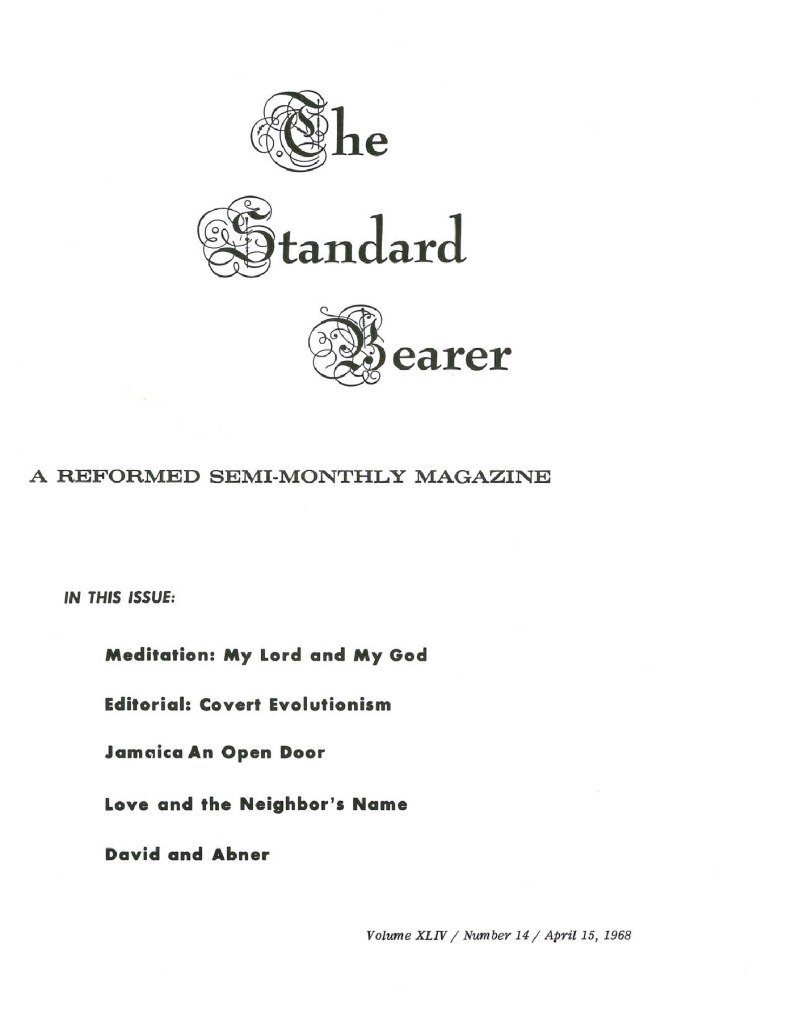