FOLLOWERS OF THOSE WHO INHERIT SALVATION (Hebrews 6:12)—Continued

This passage from Genesis 12:2, 3 is worthy of careful reading and interpretation. Here we have, as it were, the grand framework of the promise. Here we have the perspectives of the New Testament dispensation that the gospel is to be preached to the Gentiles also. Here we have that good-tidings which reads “in thee shall all nations be blessed.” It was before preached here to Abraham concerning the Gentiles. These too are Abraham’s children. (Galatians 3:8) Hence, if we be Christ’s then are we Abraham’s children and heirs according to the promise. What distant perspectives, both Christological and Eschatological! Abraham will have many heir-children. They will inherit the promise. They will not merit it; it will be all of free grace. God gives it to whom He wills. It is not of him that willeth, nor of him that runneth, but of God who giveth mercy! It is of the God of glory! (Acts 7:2) This promise has its perspectives in the glory of the new heaven and of the new earth. The heavenly and the better country is seen from afar. (Hebrews 11:10-13)

However, Abraham can only inherit this promised land, and set forth salvation, by “faith and longsuffering.” Faith is the sure subjective basis of things hoped for, the evidence of things not seen. By faith Abraham walked as seeing the unseen God. Of this we shall see more when we come to our interpretation of Hebrews 11. “Longsuffering” on the other hand, is that virtue of grace and love which does not grow exasperated and frustrated and weary in the midst of many disappointments and seemingly unnecessary tarrying on the part of God to fulfill the promised salvation. Surely, if anyone had need of faith and longsuffering, it was Abraham.

It should be remembered that the stage in which Abraham was to walk in faith and longsuffering is given in the promise “In thee and in thy seed shall all nations be blessed.” Were it not for this Word of God, the gospel, before preached to Abraham, there would be nothing toward which to look in hope and to await in faith and long suffering. Besides, it should be remembered that the particulars of the manner of the realization of the promise are made known to step by step along this road of faith and longsuffering. Abraham is not a spectator, but he is to run the race, keep the faith and thus inherit and receive the promise. And thus Abraham is not only the father of all believers, but he is also an example of faith in whose footsteps the Hebrew believers are to walk. As Abraham walked in longsuffering, thus also we are to walk. Of course, each must walk thus in his own time and dispensation of grace. Abraham looked for the realization in his day in the birth of the Son, the heir, and we look to Christ, the forerunner of our faith, who has gone before us within the veil.

And this brings us to the second stage of Abraham’s faith and patience! We read this inGenesis 12:7 “And the LORD appeared unto Abram, and said “Unto thy seed will I give this land: and there builded he an altar unto the LORD, who appeared unto him.” Abram had passed through the land. And now he is assured that his seed shall possess this land. We are told by the writer to the Hebrews that this “land” is really the “better country, the heavenly.” (Hebrews 11:10-13) However, it is doubtful whether Abram immediately saw this and was given to understand this far-reaching perspective. God as the great artist puts on touch by touch. He did not reveal all the details of the promise at once, but led Abram on as the great Pedagogue! Now Abram’s faith is upon this land. This was the land that God would shew him. This land indeed fits in with the distant perspective of the nations being blessed in him and in the seed, but that Abraham must receive in faith and longsuffering!

The next stage of the faith and longsuffering of Abraham we see in what is recorded in Genesis 15:3. Here we have the deep cry of Abraham’s struggle of faith and longsuffering when he says “Behold to me thou has given no seed: and, lo, one born in mine house in mine heir.” What a deep cry of faith and longsuffering on the part of this struggling saint! It seemed so contradictory. God would make his seed as the stars of heaven in multitude. “So shall thy seed be.” And yet he has no seed. Must he look elsewhere? His wife is childless and barren! And that too is of the Lord. Yes, he will walk in hope against hope. But this is the way then of faith and longsuffering. It is waiting God, out! And the cry is not so much “how long”; it is rather, will the promise be realized at all, since there is not one child born to Abraham. And what satisfaction does Abraham receive? He receives the sign of the multitude of the stars, and he also receives a revelation concerning Israel’s becoming a great nation in Egypt for four hundred years. Here the lines are traced out in some detail in promissory form before Isaac is born. Here the stage is kept intact for Abraham’s walk of faith and longsuffering! (Genesis 15:13) Yes, and this people shall live in this land. The time of Joshua the son of Nun is foretold, some five hundred years in the future! And in this faith and longsuffering Abraham inherits the promise. It is given to him in grace. His faith is counted for righteousness as it lays hold on the promise in Christ.

Yes, the way darkens and deepens!

It is more and more a way of faith and longsuffering.

For the fact is that Sarah becomes older and all hope of having a child is gone. And the same inevitable lot befalls Abraham. He too dies as far as the natural ability to raise up seed is concerned. The record sounds like the death-knell! “And when Abram was ninety years old and nine . . . .” But there is hope! The names of these two saints are changed. Abram is called Abraham, and Sarai is-called Sarah. He is the father of multitudes and she is the princess among the women! The day-star, the hope of the eternal morning may rise in their hearts. Listen! “I will make my covenant between me and thee and multiply thee exceedingly.” You will have a son, “and thou shalt call his name Isaac!” (Genesis. 17:2-8) And in Isaac shall thy seed be called! (Rom. 9:9;Genesis 21:12)

However, the greatest-trial of Abraham’s faith and longsuffering is when the Lord comes and commands Abraham to offer up his son Isaac. We hear its staccato sounds: take now thy son—thine only son—whom thou lovest—and get thee into the land of Moria—and offer him there for a burnt offering upon one of the mountains that I will tell thee of!” (Genesis. 22:1, 2) Here is the ultimate test of Abraham’s faith and longsuffering. It was faith. It took God at His word. It reasoned and computed in the higher dimension of what God is able to do and .what he will do according to His sure promise. Thus we read in Hebrews 11:17-19 “By faith Abraham, when he was tried, offered up Isaac; and he that had received the promises offered up his only, begotten son, of whom it was said, in Isaac shall the seed be called; accounting that God was able to raise him up, even from the dead; from whence also he received him in a figure.” Such was the faith in which Abraham inherited the promise. Yes, and it was a way of alongsuffering. The road was long, the trials were many and they were severe. They were humanly impossible, and they seemed to contradict the very promise of God! But faith. “accounted” and it “suffered long.”

Isaac is taken to the designated mountain. Hear the faith of Abraham speak, “God is able, God is able . . .” Once Abraham had received his son as born from those who were dead. He had believed in hope against hope upon him who raiseth the dead to life and calleth the things which are not as though they were. (Romans 4:17) The hand of the LORD is truly not shortened. O, the faith of Abraham was great. He waxed strong in faith, and he did not faint. He did not become bitter with God, He loved God, and suffered long in this love. And thus he inherited the promise in this long road of faith and longsuffering, going on from strength to strength! (Psalm 84:5-7) Truly, blessed is the man whose strength is in the LORD . . . who passing through the valley of Baca make it a well; the rain also filleth the pools. They go from strength to strength, everyone of them in Zion appeareth before God!

GOD CONFIRMS THE PROMISE BY OATH TO ABRAHAM (Hebrews 6:13-15)

It was a glorious moment of faith and longsuffering there on mount Moriah, but it was also a moment of great obedience. Abraham did not withhold his son from God. He sacrificed him in obedience of love. He was tried and his faith was perfected. Faith could rise no higher; it had reached the zenith on Moriah’s heights. It was the full assurance of faith indeed. See Abraham with hand-extended holding the knife to plunge it into the throat of Isaac. Hear from heaven God calling: Abraham, Abraham it is enough! Lay not thine hand upon the lad, neither do thou anything unto him: for now I know that thou fearest God, seeing thou has not withheld thy son, thine only son from me. (Genesis 22:12)

Yes, the Lord did prepare himself a sacrifice. It was not Isaac, but a vicar. The Lord prepared in such a way that it was Jehovah-jireh, in the mount of the Lord it shall be manifested. It was a picture of Calvary and of the resurrection from the dead. Here the perspectives open beyond the present life. It is through death and resurrection that we become the multitude of the seed in Abraham, and that the word is fulfilled: in Isaac shall thy seed be called. And here Abraham did not merely see the promised land of earthly Canaan. Here he saw Christ’s day from afar and rejoiced. (John 8:56) The Mystery of godliness was unfolded here. And thus Abraham obtained the promise. He actually obtained the promise by faith, and this was the end of the long road of faith and longsuffering!

That such was the case with. Abraham is evident from the oath which God swore to Abraham: God swears this oath as a reward for Abraham’s faith. Thus we read in Genesis. 22:15-19 as follows. “And the angel of the LORD called unto Abraham out of heaven the second time, and said, By myself have I sworn, saith the LORD, for because thou hast done this thing, and hast not withheld thy son, thine only son: that in blessing I will bless thee, and in multiplying I will multiply thy seed as the stars of the heaven, and as the sand which is upon the seashore; and thy seed shall possess the gates of his enemies; and in thy seed shall all the nations of the earth be blessed; because thou hast obeyed my voice.” 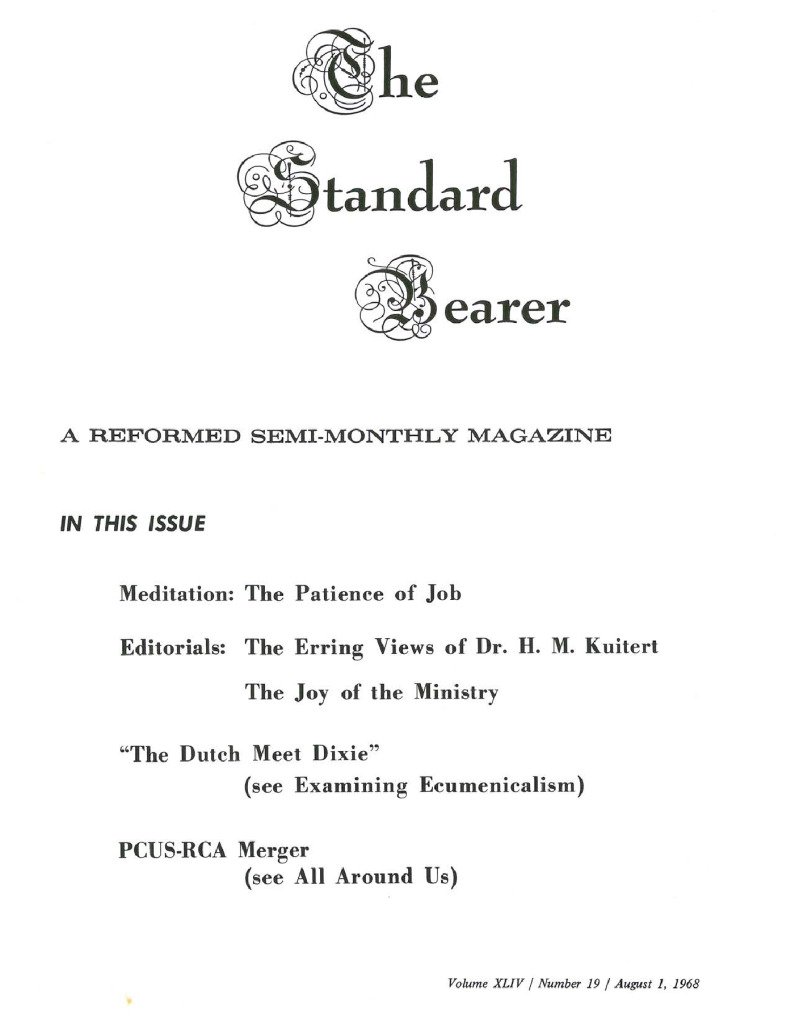