THE THINGS SPOKEN THROUGH ANGELS STEADFAST AND SURE (Hebrews 2:2) Continued

It is true that Exodus 19 tells us nothing concerning the presence of the angels at the law-giving to Moses and Israel at Sinai. But from this silence of the sacred record it cannot be concluded that the angels were not present. For in Deuteronomy 33 we read of the blessing wherewith Moses blessed the children of Israel before his death. Here Moses is designated as “the man of God,” which is an official title. And the starting-point of this blessing is what God did in the law giving at Sinai. The language is poetical and lofty, it is the loftiness of a Psalm in which we have portrayed the appearance of God at Sinai, together with the myriads of angels; it was the great moment in Israel’s history when God gave his Ten Words and all the law and the prophets which depend upon it. (Matthew 22:40).

What a majestic sight this was! Did not Israel fear and quake before it, and even Moses said “I exceedingly fear and tremble”? The whole desert range of mountains was lit up with the light of heaven’s glory, even from mount Seir in the south to mount Paran in the north, a distance of 150 miles. And He came with the ten thousands of His saints. We agree with Calvin and many others that the “saints” here must be translated the “holy ones,” that is, the holy angels. It was in the midst of the holy angels, the messengers of His throne, that Jehovah appeared on Sinai. And God had the fiery oracles in his right hand. It is the law which is the rule for life and faith of redeemed Israel. It was for the people which He loved. And the people sat down at the feet of God to hear this law! (Deuteronomy 33:1-4) This is the law-giving to which Stephen refers in his apology before the Sanhedrin in Acts 7:52, where he accuses the adulterous Israel of their spiritual infidelity in these words “who have received the law by the disposition of angels, and have not kept it.” And Paul speaks of this great event at Sinai in the letter to the Galatians when he writes “and it (the law, G.L,) was ordained by angels in the hand of a mediator.” (Galatians 3:19b) Moses could not receive this law directly from the hand of God. God wrote it with His own finger in Divine glory, (a glory before which even the angels cover. their faces) and give it to angels to put into Moses’ hand to carry it down the mountain to the people of Israel. It was, in a sense, a word which was spoken from afar. Moses is not the mediator of God and man, but rather a messenger who gave the law to Israel. The law was given through Moses, but grace and truth became a tested reality through Jesus Christ (John 1:17)

And this law, given by angels in the hands of a mediator, is called the “word” given by angels; it is not the great salvation itself. Nevertheless, it was a “word” which became steadfast. (egeneto bebaios) That itbecame steadfast means that it was proved sure in history. It was a steadfast and reliable word in itself, since it was spoken by God who cannot lie, but this reliable word proved to be steadfast by God each time that Israel departed from the way of the Lord, carried away to dumb idols and to the abominations of the heathen. (See Westcott’s “The Epistle To The Hebrews,” page 38, where he writes the following “. ..not only was assured, confirmed by some external authority; but it was, as it were, vindicated by its own claims. There is in the divine law a self-executing power. It confirms itself”). The divine sanction of Sinai’s law was proven in the maintaining of it in history. And these lessons of history the church must observe, which were written for us as an example, lest we walk in the same unbelief. (I Corinthians 10:11-12) Paul refers in I Corinthians 10:1-13 to what happened to Israel at the worshipping of the golden calf, (Exodus 32:6) and to what happened to Israel when they were at Baal-Peor, where there fell three and twenty thousand in one day. All of Israel’s history and their unbelief attest to the mighty fact that the word spoken through angels proved to be steadfast.

So steadfast did the law, spoken by angels, prove to be that “every transgression and disobedience received a just recompense of reward. Two facts of sin are here articulated. Transgression (pavabasis) was the actual transgression, the positive sins and overt acts; disobedience was the root of it. It was a failing to give heed to the word spoken by God through angels. But each of these received a just recompense of reward, that is, there is an “absolute correspondence” between the punishment and the transgression. The question was not: who perpetrated the misdeed; the sole question was: what was the transgression. For a just retribution corresponds to a rule. And the recompense of reward shows that it is an exact requital of good and evil by the righteous Judge in His divine sovereignty.

Wherefore the children of God in the Old Testament dispensation were always and again exhorted to give earnest heed to the things spoken by God through angels. It is the key-note of Moses in the entire book of Deuteronomy (Second law-giving) in the fortieth year of Israel’s wanderings in the desert. Just one instance out of many will suffice to make this abundantly clear. We refer to Deuteronomy 4:9 “Only take heed to thyself, and keep thy soul diligently, lest thou forget the things which thine eyes have seen, and lest they depart from thy heart all the days of thy life: but teach them thy sons and thy son’s sons, specially the day that thou stoodest before the LORD thy God in Horeb, when the LORD said unto me, gather me the people together, and I will make them hear my words, that they may learn to fear me all the days that they shall live upon the earth, and that they may teach their children….” CompareDeuteronomy 4:15,23;11:16;12:13,19,30.

Surely Israel needed to be warned that they depart not from the word spoken through angels, lest this word prove to be steadfast even in their own disobedience and transgression in departing from the living God. For our God with the fiery oracles is a consuming fire!

A WARNING BY COMPARISON AND CONTRAST (Hebrews 2:3-4)

The writer to the Hebrews continues his warning and exhortation that we shall give the most earnest heed to the things heard. By the “things heard” he indicates the “so great salvation” which is ours in Christ Jesus. Able scholars and exegetes as Delitzsch and Westcott call attention to the fact that the term “gospel” is not found in the book of Hebrews. This is corroborated by a reference such as Young’s Analytical Concordance. And the things heard are ever connected with the concept “preached.” (Hebrews 4:4,2,6) and the things “spoken.” (Hebrews 2:2-3;3:5)

It is by way of contrast, first of all, that our writer underscores the need of our giving heed to the salvation in Christ. Here we do not merely have a word spoken by angels, but we have a salvation which is ours in the LORD himself, our Lord Jesus Christ. Here is the contrast between the law given through Moses and grace and truth which came through Jesus Christ.

Both what God spoke through angels at Sinai and what He performs in Christ in “these last days” in Christ’s death, resurrection and ascension at God’s right hand are sure and steadfast. They are two manners of speaking which are related as type and reality. Now if the shadow of things must be given earnest heed and be taught to the children and children’s children, how much more must we give earnest heed to the gate of God which has been preached to us in Christ.

For this which we have heard in these last days has reference to us. We must give heed, for the kingdom of God has come upon us. Did not the Lord himself begin to speak these things on earth. He did not speak them from a fiery mountain; yet, speak he did, in prose, and he spoke as one having authority. Never a man spake as he did. Such was the testimony even of the enemies who did not obey him. In Mark 1:14 we read “Now after that John was put in prison, Jesus came into Galilee, preaching the Gospel of the kingdom of God, and saying, The time is fulfilled, and the kingdom of God is at hand: repent ye and believe the gospel.” It might be objected that John the Baptist also preached the kingdom as being at hand, but it must be remembered that John was but the forerunner who pointed to the Christ. However, Jesus began to preach that the kingdom of God is come in him. He is the Son of God, Immanuel, God-with-us. He opened the eyes of the blind, caused the lame to walk, the deaf to hear, and the poor were preached glad-tidings of the forgiveness of sins. Without Christ there would not have been a beginning. God spoke in these last times in Christ. God was in Christ reconciling the world unto Himself. God spoke unto us through the Lord.

And these very things which the apostles heard him speak, and the signs which they saw him perform, and the death and resurrection and ascension which they had witnessed as eye-and ear-witnesses, were made sure and steadfast to us by them. And God was with them accompanying their preaching with signs and wonders. (Compare Mark 16:20; Romans 15:8.)

The writer mentions: signs, wonders and divers powers. Perhaps we can say that there is here a progression from that which is most strikingly visible to that which is most decisively inward in these signs and wonders. “Signs” are ever something visible to the eye, while “wonders” refers to the effect these have upon those beholding them, and “powers” refers to the inward ability of God in them, demonstrating that surely nothing is impossible with God. And these powers were “divers.” The term translated in KJV “divers” ispoikilais in the Greek. Twice this term is translated “manifold” in the New Testament, but more often it is translated “divers.” The idea of what is manifold is: a whole consisting of many and diverse elements. Thus the wisdom of God in Ephesians 3:10 is called “manifold wisdom of God.” Here, however, the signs, wonders and power are diverse. The idea of diversity implies both contrast and distinctiveness. Each sign was distinct from the other and stood out in marked contrast. They did not all come together in one grand blur, but each had a distinctive message in connection with the mysteries of the kingdom.

Besides, they were not man-wrought signs and powers, but they were wrought by the Holy Spirit who distributes to each as He wills. It was the active exercise of the Divine will of the Holy Spirit of God. When Peter and John command the man, who was born a cripple, to walk at the gate of the temple, this miracle did not have its origin in Peter, but in the exercise of the Divine will, as a distribution of the Spirit. And thus God confirmed their word and opened the eyes and ears of the people in Jerusalem, even causing a Gamaliel to say: Let us let them go lest we be fighting against God. (Acts 5:39) It was a distinct sign, divers from others, wrought by the Spirit according to God’s active will. 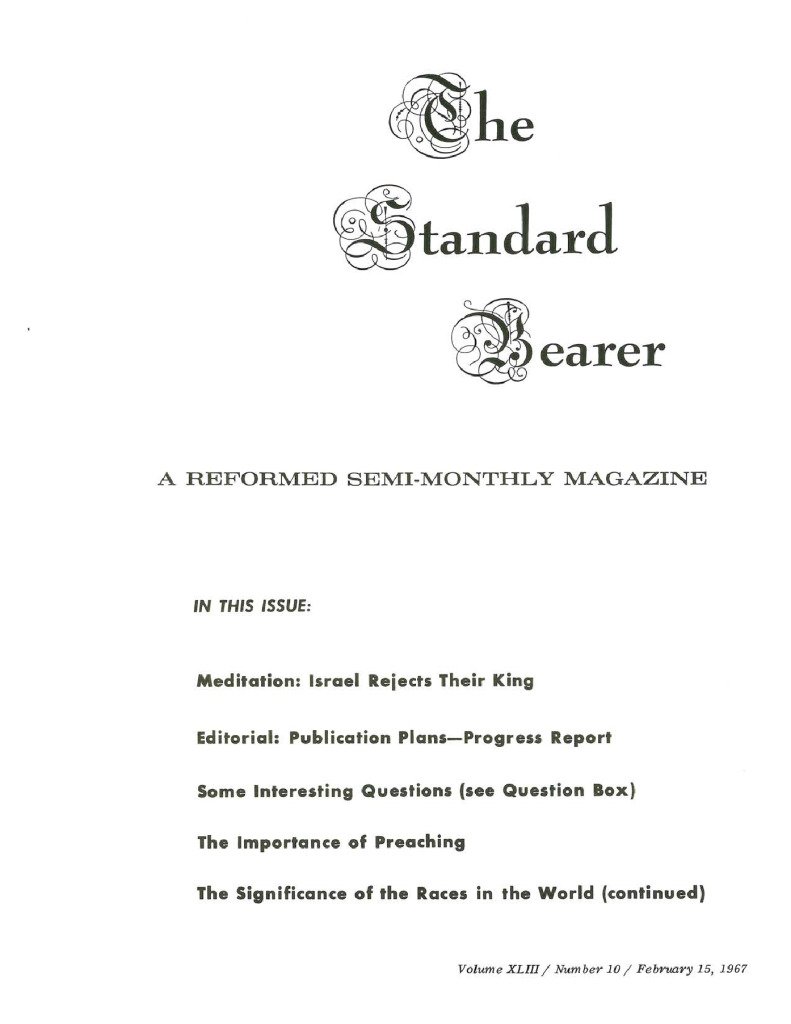