Just as children of the Reformation understand that the greatest event between Pentecost and the return of Christ was above all a return to the Scriptures, so Calvinists ought to know what the theologian of the Reformation held those Scriptures to be. “It was Calvin’s Institutes which, with its calm, clear, positive exposition of the evangelical faith in the irrefragable authority of Holy Scripture, gave stability to wavering minds, and confidence to sinking hearts, and placed upon the lips of all a brilliant apology in the face of the calumnies of the enemies of the Reformation” (B.B. Warfield, p. v).1

Calvin’s view of Scripture is set forth in the first nine chapters of the Institutes. It is only after he has laid down the principle of biblical authority that he allows himself and the reader to proceed to a consideration of the doctrines of God, man, Christ, salvation, and the church. After several chapters in which he treats such subjects as the connection between the knowledge of God and the knowledge of ourselves, the nature of the knowledge of God, and what the fall has done to man’s knowledge, he stresses in chapter six that the guidance and teaching of Scripture is necessary even to know God rightly as Creator. Repeatedly he emphasizes that “God uses not only mute teachers (creation, DHK), but even opens his own sacred mouth; not only proclaims that some god ought to be worshipped, but at the same time pronounces himself to be the Being to whom this worship is due” (p. 81). He reminds us that he is not treating the covenant or salvation here, “but only showing how we ought to learn from Scripture, that God, who created the world, maybe certainly distinguished from the whole multitude of fictitious deities” (p. 81).

It is clear, therefore, that Calvin taught that the study of creation by science, although more than sufficient to deprive the ingratitude of men of every excuse, was not sufficient to give anything more than confused notions of deity. There is not, in his view, a reciprocal relation between Scripture and scientific findings by which each casts true light upon the other, as the theistic evolutionist holds today. Calvinists must avoid that proud pitfall and confess that Scripture alone gives us the truth regarding creation and the Creator.

The Establishment of Scripture’s Authority

In chapter seven Calvin teaches that unless the authority of Scripture is firmly established, doubts will flourish in them in the mind and there will be a lack of reverence for the Word. “But since we are not favoured with daily oracles from heaven, and since it is only in the Scriptures that the Lord hath been pleased to preserve his truth in perpetual remembrance, it obtains the same complete credit and authority with believers, when they are satisfied of its divine origin, as if they heard the very words pronounced by God himself” (p. 85) He calls it a pernicious error that the Scriptures derive their authority and weight by the suffrages of the church, or that the church decides what reverence is due the Scriptures, and what books comprise the canon.

Calvin destroys the argument that the Scriptures depend on the church’s decisions by quoting Ephesians 2:20, where we read that the church is built upon the foundation of the apostles and prophets. If the foundation of the church is Scripture, Scripture precedes the existence of the church, and the church cannot exist without Scripture. How, then, can she be the judge of them? “Wherefore, when the church receives it, and seals it with her suffrage, she does not authenticate a thing otherwise dubious or controvertible; but knowing it to be the truth of her God, performs a duty of piety, by treating it with immediate veneration” (p. 87).

The enemies of biblical authority like to quote Augustine’s line fl that he would not believe the Gospel unless he were influenced by the authority of the church.” Calvin calls this false and unfair because the context of his statement is ignored. Augustine, when arguing against the Manichees, writes this only of aliens from the faith who could not be persuaded to believe the Gospel as the truth of God unless they saw uniform agreement in the church. For how can the church command the obedience of faith if she herself does not agree on doctrine? Augustine held that the authority of the church was only an introduction to prepare the hearer for the faith of the Gospel.

Calvin insists that the principal proof for the authority of the Bible is derived from the character of the Divine Speaker. “The prophets and apostles boast not of their own genius, or any of those talents which conciliate the faith of the hearers; nor do they insist on arguments from reason; but bring forward the sacred name of God, to compel the submission of the whole world” (p. 89). He immediately adds that “the testimony of the Spirit is superior to all reason. For as God alone is a sufficient witness of himself in his own word, so also the word will never gain credit in the hearts of men, till it be confirmed by the internal testimony of the Spirit” (p. 90). What must we think of Calvinists who wonder at the nature and extent of biblical authority in the twentieth century? Why appoint committees to study such a question? It is faithless conniving against the fundamental principle of the Reformation.

After calling it an undeniable truth that “they who have been inwardly taught by the Spirit feel an entire acquiescence in the Scripture, and that it is self-authenticated, carrying with it its own evidence” (p. 90), a grand statement echoed in Article 5 of our Belgic Confession, Calvin is not afraid to place the inability of reason to establish the Bible as the Word of God right alongside the reasonableness of faith which believes this is so. “It is such a persuasion, therefore, as requires no reasons; such a knowledge as is supported by the highest reason, in which, indeed, the mind rests with greater security and constancy than in any reasons; it is, finally, such a sentiment as cannot be produced but by a revelation from heaven” (p. 91). This is what every believer experiences in the depths of his heart. This is what Isaiah means when he states that “all the children shall be taught of God” (Is. 54:13). And this great gift of faith is what distinguishes the elect from the rest of mankind. Only the elect are given to understand the mysteries of God.

Although faith is necessary to establish the truth and authority of Scripture in one’s heart, Calvin concedes that certain rational proofs can help the believer in his confession and defense of biblical doctrine – but only if the foundation of faith has first been laid. Whilst, on the contrary, when, regarding it in a different point of view from common things, we have once religiously received it in a manner worthy of its excellence, we shall then derive great assistance from things which before were not sufficient to establish the certainty of it in our minds” (p. 93). Calvin has in mind the “order and disposition of the Divine Wisdom dispensed” in Scripture, the “heavenly nature of its doctrine which never savours of any thing terrestrial,” the “beautiful agreement of all parts with each other,” and the “dignity of the subjects rather than the beauties of the language.” He believes that “the force of truth in the sacred Scripture is too powerful to need the assistance of verbal art” and that the sublime mysteries of the kingdom of heaven are communicated, for the most part, in humble and contemptible style” (p. 93, 94).

Nevertheless, the “diction of some of the prophets is neat and elegant, and even splendid; so that they are not inferior in eloquence to the heathen writers. And by such examples the Holy Spirit has been pleased to show, that he was not deficient in eloquence, though elsewhere he hath used a rude and homely style” (p. 94). Whether biblical language is a sweet flow of words or characterized by rusticity, the inspiration of the Spirit is everywhere in evidence.

Another assisting proof to faith in Scripture is the endurance of the Word of God throughout all generations. Himself in awe, he writes, “For it is not an unimportant consideration, that, since the publication of the Scripture, so many generations of men should have agreed in voluntarily obeying it; and that however Satan, together with the whole world, has endeavored by strange methods to suppress or destroy it, or utterly to erase and obliterate it from the memory of man, yet it has always, like a palm-tree, risen superior to all opposition, and remained invincible” (p. 103). Calvin ascribes the preserving of Scripture throughout the ages, not to the church or the faithfulness of men, but to the providence of God. This comforting, historical fact is further proof that the Bible is a Divine Book.

The final proof that can assist our faith in receiving the doctrines of the Bible with confidence is that it has been confirmed by the blood of so many saints. “Having once received it, they hesitated not, with intrepid boldness, and even with great alacrity, to die in its defence: transmitted to us with such a pledge, how should we not receive it with a firm and unshaken conviction? Is it therefore no small confirmation of the Scripture, that it has been sealed with the blood of so many martyrs” (p. 103)? Calvin closes chapter ten with the reminder that “the Scripture will then only be effectual to produce the saving knowledge of God, when the certainty of it shall be founded on the internal persuasion of the Holy Spirit. Thus those human testimonies, which contribute to its confirmation will not be useless, if they follow that first and principal proof, as secondary to our imbecility” (p. 104).

Calvin is intolerant of those who pretend not to need the Scripture because they have received special revelations from the Spirit. He calls this attempt to separate Word and Spirit ridiculous, puerile, mean, and subversive. “The office of the Spirit, then, which is promised to us, is not to feign new and unheard of revelations, or to coin a new system of doctrine, which would seduce us from the received doctrine of the Gospel, but to seal to our minds the same doctrine which the Gospel delivers” (p. 106). Since the Spirit is the author of Scripture, He cannot by secret revelations be inconsistent with Himself. He always testifies to His own truth which He has expressed in Scripture, with the result that “he only displays and exerts his power where the Word is received with due reverence and piety” (p. 108). The antidote to the growing mysticism and improper emphasis on the Spirit in our day is the Reformation doctrine of the sufficiency of Holy Scripture.

In summary, Calvin sharply limits what can be known from creation to confused notions of deity, denies that the authority of Scripture depends on decisions of the church, warns against rational arguments for biblical inspiration if faith is not first present, and concludes with severe criticism of those who would separate Word and Spirit. We have quoted extensively from the Institutes to show this. But we have another reason for doing this. Is not your appetite whetted to give the Institutes a first, or another, careful reading? 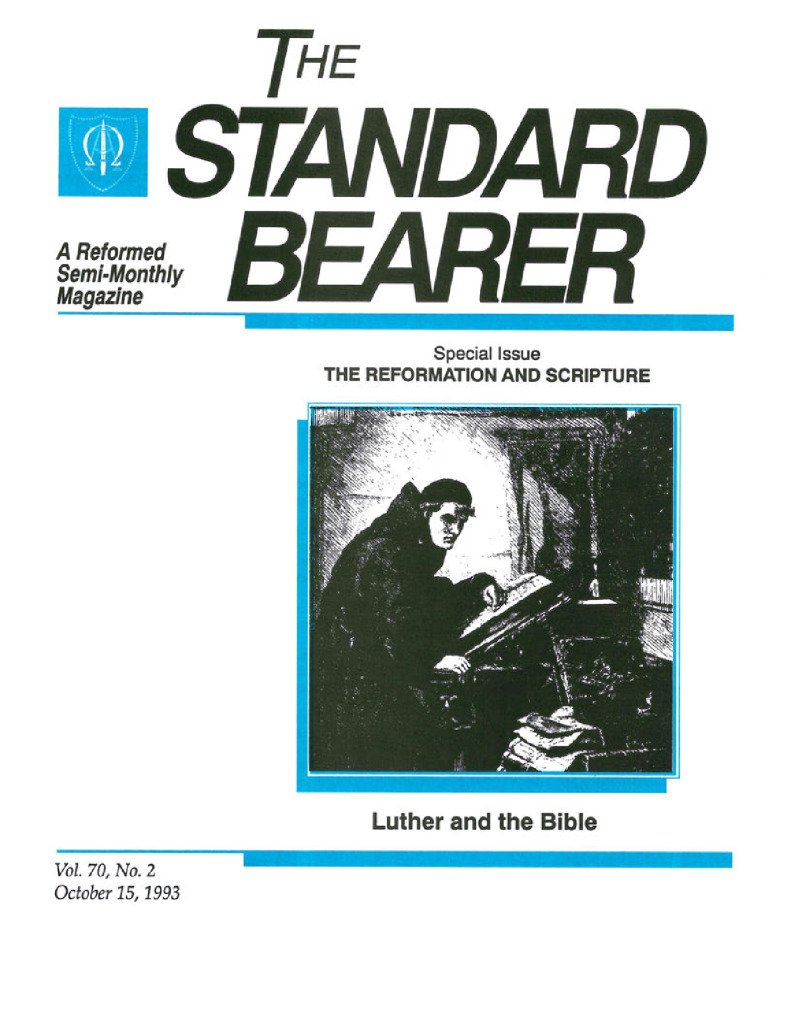