We discussed the value of creeds generally and some of the objections commonly lodged against the creeds in the previous article. Perhaps the single and most significant objection against the Belgic Confession is that it is the work of just one man, Guido de Bres. It has been alleged that this creed does not, strictly speaking, partake of the nature of a genuine creed. A creed ought to be the expression of the common faith of the members of the Body of Christ, whereas theBelgic Confession is the work merely of one man. It is true that there is something unique about the origin of the Belgic Confession. The Heidelberg Catechism was written by Ursinus and Olevianus at the express order of Elector Frederick as a means of instructing his people in the fundamentals of the Reformed Faith. The Canons of Dordrecht were composed and adopted by an international Synod as a statement against the errors of Arminianism. But the Belgic Confession was written by de Bres. Commenting on exactly this point, Dr. Peter Y. DeJong writes: “Often the creeds are superficially judged to be the work of one or a few men. Nothing is farther from the truth. TheBelgic Confession expressly manifests the earmarks of the faith which was commonly received by the people of the Netherlands in those days.” (The Church’s Witness To The World, p. 26) With this we concur; only we would add that the Belgic Confessionexpressly manifests the earmarks of the faith which is even today commonly received by believers of Reformed convictions.

We have noted in our brief description of the life of de Bres that he was deeply influenced by the greater Reformer of Geneva. It is possible that somewhere between the years 1552 and 1559, when he was in Geneva, de Bres studied under Calvin. Whether he actually did or not makes little difference. The fact is that he was influenced by Calvin. A comparative study of the Belgic Confession and the Institutes of the Christian Religion indicates this beyond any doubt. Even from the point of view of the purpose of de Bres in writing the Confession he was deeply influenced by John Calvin. Calvin had a dual purpose in composing his Institutes and states this eloquently in the first two paragraphs of the “Prefatory Address to King Francis I of France” which is found at the beginning of theInstitutes proper:

When I first set my hand to this work, nothing was farther from my mind, most glorious King, than to write something that might afterward be offered to your Majesty. My purpose was solely to transmit certain rudiments by which those who are touched with any zeal for religion might be shaped to true godliness. And I undertook this labor especially for our French countrymen, very many of whom I knew to be hungering and thirsting for Christ; but I saw very few who had been duly imbued with even a slight knowledge of him. The book itself witnesses that this was my intention, adapted as it is to a simple and, you may say, elementary form of teaching.


But I perceived that the fury of certain wicked persons has prevailed so far in your realm that there is no place in it for sound doctrine. Consequently, it seemed to me that I should be doing something worthwhile if I both gave instruction to them and made confession before you with the same work. From this you may learn the nature of the doctrine against which those madmen burn with rage who today disturb your realm with fire and sword.”

From this statement it is obvious that Calvin wrote theInstitutes for the purpose of transmitting the rudiments of the faith to especially the French believers and as a confession, an apology for the true nature of the doctrine before the king. It is certainly more than merely coincidental that de Bres composed the Belgic Confession for the same dual purpose: an apology before the rulers and for the instruction of the believers. Guido de Bres had learned his lessons well at the feet of Calvin. This is also obvious from the title which he gave to his Confession: “Confession of Faith Made With One Accord for the Faithful that are wandering in the Low Countries According to the Purity of the Gospel, Who Desire to Live of Jesus Christ.” de Bres certainly wrote as well for the purpose of showing the authorities that the Protestant doctrines were nothing else than the truth of the Holy Scriptures. Even as early as 1562 the Belgic Confession was presented to Philip II: “. . . in the vain hope of securing toleration, and with an address which breathes the genuine spirit of martyrdom. The petitioners protest against the charge of being rebels, and declare that notwithstanding they number more than a hundred thousand, and are exposed to the most cruel oppression, they obey the government in all lawful things; but that rather than deny Christ before men they would ‘offer their backs to stripes, their tongues to knives, their mouths to gags, and their whole bodies to the fire, well knowing that those who follow Christ must take his cross and deny themselves.'” (Philip Schaff,Creeds of Christendom, vol. 1 p. 505)

From the point of view of its contents the Belgic Confession clearly bears the stamp of John Calvin. In fact it may safely be said that the Confession really amounts to an eloquent summation of the Institutes of the Christian Religion. It follows the same general outline and deals with the same truths though, of course, much more briefly.

But apart from that, there is an even closer connection between Calvin and the Belgic Confession. Among the large group of Protestants in France there was a congregation at Pontiers in which disagreement arose concerning the doctrine of predestination. Evidently all agreed that the doctrine was taught in the Scriptures, but the dissension arose concerning how this truth ought to be formulated and believed. To resolve their difficulty the congregation sought the advice of neighboring French Churches. It was the opinion of these churches that the French congregations needed a common confession in order to preserve the churches against error. A delegation was sent to Geneva to secure the advice and help of Calvin. Calvin prepared a rough draft of a confession which was a summary of his more lengthy and comprehensiveInstitutes. A Synod met in Paris during 1559 while persecution raged throughout France, threatening the very lives of the delegates. So pleased were the delegates of this Synod with the draft offered by Calvin that they adopted it without significant change. This became known as the Gallican Confession. It, too, was composed to preserve the peace and unity of the French Churches of the Reformation and later came to be used as an apology for the faith before the authorities. A comparative study of this Gallican Confession and the Belgic Confession indicates conclusively that de Bres leaned heavily on this creed in the formation of the Belgic Confession. On this ground it cannot be alleged that the Belgic Confessionis merely the work and statement of faith of one man. It was clearly and significantly influenced by John Calvin; and it expresses the faith held by the French Churches as well, through its relationship to the Gallican Confession. Concerning this relationship Schaff remarks: “The Belgic Confession contains thirty-seven Articles, and follows the order of the Gallican Confession, but is less polemical and more full and elaborate, especially on the Trinity, the Incarnation, the Church, and the Sacraments.” (Creeds of Christendom, vol. I, p. 506)

Besides all this, de Bres was not alone in the writing of this creed. He was aided by several leaders of the Reformation. Among these were Adrian de Savaria, who served as professor of theology in Leyden and later Cambridge, H. Modetus, who for a time was the chaplain of William of Orange, and G. Wingen. While de Bres must be regarded as the chief author, these men served in the formulation of the Confession. It was revised by a certain Francis Junius of Bourges, who had studied under Calvin and was at the time a pastor of a Walloon congregation at Antwerp and who later was professor of theology at Leyden. This man abridged Article 16 and sent a copy of the creed of Geneva and other churches for their approval. The first printing appeared in 1561 and was followed by other editions in 1562 and 1566 in the French language. Later the creed appeared in Dutch, German, and Latin. In this light it can hardly be maintained that de Bres was the only author.

That the Belgic Confession was a faithful expression of the faith held by Reformed believers in the Lowlands is obvious from the widespread and enthusiastic acceptance it enjoyed among the churches. As early as 1566 the Belgic Confession was adopted publicly by a Synod which met at Antwerp. Later it was adopted by the Synods at Wesel(1568), Emden (1561), and by a national Synod at Dordt (1574), and by another national Synod at Middelburg (1581). Finally the great Synod of Dordt on April 29, 1619 adopted the Belgic Confession. Thus this creed became one of the three confessional pillars upon which the Reformed churches stand. It was also the great Synod of Dordt which carefully revised the French, Latin, and Dutch texts.

Certainly, the Belgic Confession is the product of the great Reformation and stands to this very day as an eloquent testimony of the faith of our fathers. As we shall see, D.V., in our expository study of this creed it adequately sets forth the faith for our own times. Surely, it speaks to the need of today as well as it spoke some four hundred years ago. A careful and prayerful study of this beautiful symbol of the Reformed faith will lead pus into a deeper understanding of the “faith once delivered to the saints.” This will surely be the fruit: for this creed is, “built upon the foundation of the apostles and prophets, Jesus Christ himself being the chief cornerstone.” (Eph. 2:20) It ought to be our heartfelt prayer that we as Reformed believers and Churches may be as committed to the truth of God’s Word set forth in the Belgic Confession as were our fathers who wrote it and adopted it as their standard. They were willing to “offer their backs to stripes, their tongues to knives, their mouths to gags, and their whole bodies to the fire, well knowing that those who follow Christ must take his cross and deny themselves!” So deep was their conviction, so firm was their faith. In that faith and on account of that testimony many of them died the death of a martyr. So deep and so firm must be our conviction of faith. 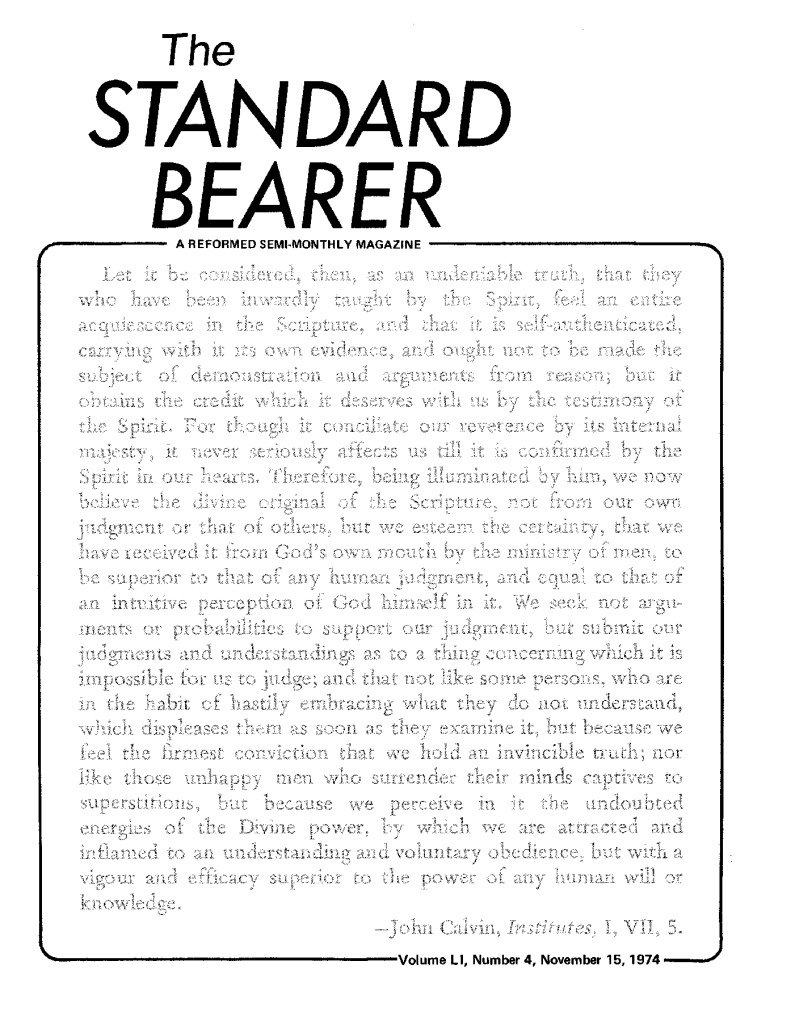