The Apostolicity of the Church (1)

The Apostolicity of the Church (1)

Reformed believers officially confess to believe the apos­tolicity of the church. The Nicene Creed is one of our official creeds, and in this creed we con­fess to believe “one holy catholic and apostolic church.” Thus it is very important that we understand the meaning of the church’s apos­tolicity, so that we may confess this truth with understanding from the heart.

That the church is apostolic means that it is built upon the truth set forth by the apostles in the New Testament. Apostolicity has to do with the very foundation of the church. A true church is built upon the Truth, since Christ is the Truth, and this Truth has been set forth infallibly for us by the divinely in­spired apostles in the New Testa­ment.

The Scriptures make specific reference to this in a number of places. First, there is Ephesians 2:20, which says that the church is “built upon the foundation of the apostles and prophets, Jesus Christ himself being the chief corner stone.” Here the truth revealed through “the apostles and proph­ets” is referred to as the founda­tion of the church. The prophets referred to in this passage were the inspired prophets of Paul’s day, as is evident from the other references to “the prophets” in the book of Ephesians (cf. Eph. 3:5; 4:11).

That this is the idea is found more explicitly elsewhere in Scrip­ture. In Acts 2:42, we read that the believers in the new dispensa­tion “continued stedfastly in the apostles’ doctrine and fellowship.” Still today the believers are those who remain “in the apostles’ doc­trine.” A church that is truly ap­ostolic is one that continues to pro­claim the same truth that the apostles proclaimed and wrote down infallibly in the New Testa­ment Scriptures.

Apostolicity & the Relation of the New Testament to the Old

To reject the New Testament explanation of the Old Testament is really to deny the apostolicity of the church. For example, there are many who take the Old Testament promises concerning all nations coming to Christ, and say that these promises are teaching that one day soon every nation on this earth will be governed by Christian rulers. Such people try to prove their po­sition by quoting frequently from the Old Testament, while ignoring the apostolic explanation of these promises that is found in the New Testament. The apostles said that the promises concerning all nations coming to Christ are fulfilled when a remnant from the different na­tions is converted and believes in Jesus (Acts 15:17). The rejection of this is a rejection of the truth of Scripture and very really a rejec­tion of the apostolicity of the church.

A Succession of the Truth, not of Persons

The Romish church says that she alone is the apostolic church because, so she claims, there is a continuous line of succession from the present pope back to the apostle Peter, and from the bish­ops in the Romish church back to the other apostles. Peter, they say, was the first pope and the rock upon which their church is built. To prove this, they have invented a long line of popes, starting with Peter and ending with their present leader, Pope John Paul II.

Contrary to this, we say that maintaining the truth taught by the apostles is what is important. Let us say, just for the purpose of ar­gument, that Peter was the first pastor of the church in Rome. This would by no means prove that the Romish church today is an apos­tolic church. All around the world there are churches that once had faithful pastors proclaiming the truth of the gospel, which now have completely apostatized. We know from the epistle to the Ro­mans found in Scripture that there once was a sound church in Rome, a church that was founded by the teaching of the apostles. But this church later apostatized, so that it no longer was an apostolic church. At the time of the Protestant Ref­ormation, the Reformers knew that the Romish church had a long his­tory, going back to the days of the apostles, but the Romish church had long ago departed from the teaching of the apostles. The Re­formers reformed the church by breaking away from this apostate institute and forming congrega­tions that were based squarely and solely on the truth set forth by the apostles in the Scriptures.

The Romish church, of course, rejects this, and appeals to her “catholicity” to prove her “aposto­licity.” The church that is truly holding to the truth taught by the apostles will be a church visibly spread throughout the whole world, she says, and churches hold­ing to false doctrines will be con­fined to only a few regions. But this is based, in part, on Rome’s false view of what is meant by the catholicity of the church, a view that was refuted in the previous ar­ticle. There is one central mark that indicates whether or not an insti­tuted church is a true manifesta­tion of the one catholic and apos­tolic church, and that is the mark of the pure preaching of the apostles’ gospel. A true church is a church that preaches the apos­tolic doctrine, no matter how small she may be, and no matter how few like-minded churches she can find with whom she can enjoy fellow­ship. 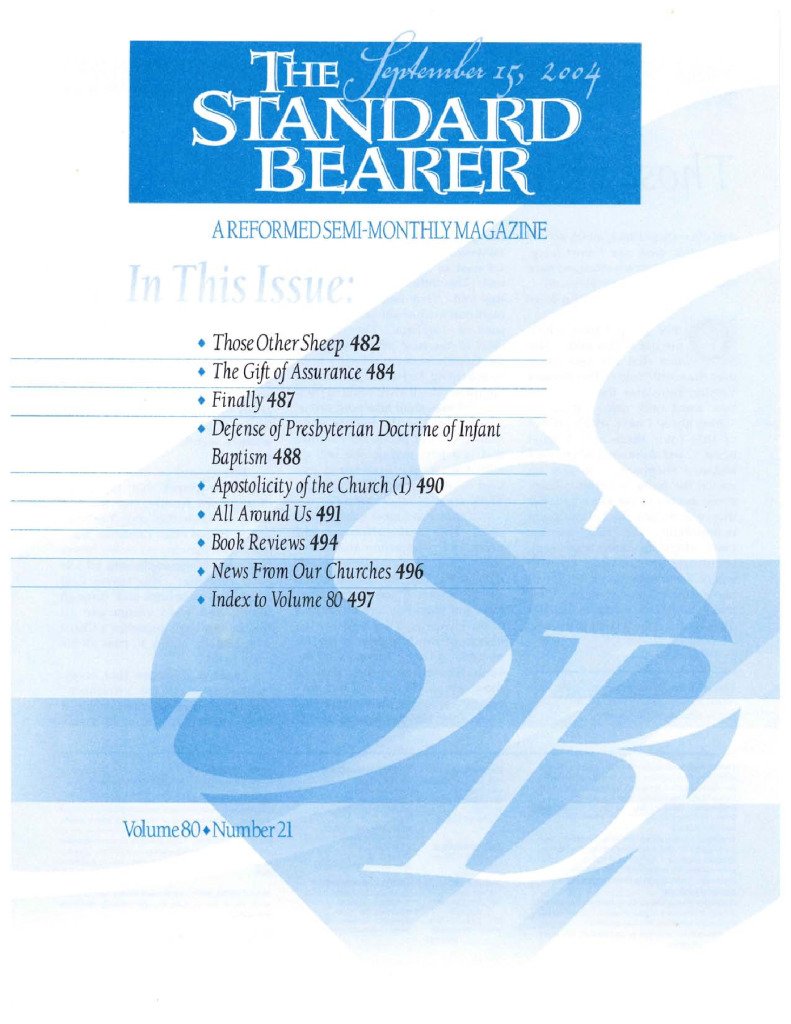