Herman Veldman is a minister emeritus in the Protestant Reformed Churches.

We read in the first article of our Apostles’ Creed: “I believe in God the Father, Almighty, Maker of heaven and earth.” In our preceding article we called attention to the relation between God’s counsel and the creation of the world. That this connection exists lies in the nature of the case. This first article of the Apostles’ Creed speaks of our faith in this heavenly Father Who is the Maker of heaven and earth. Of course, this divine Creator created all things according to His divine plan. Does not even an earthly builder have a plan before he builds a house? Do not the Scriptures speak of God as a Maker or Architect and Builder? When our Heidelberg Catechism, in Answer 26, speaks of God’s eternal counsel as implied in this article of our Apostles’ Creed, it is surely absolutely correct. And we noted that this counsel of God is eternal and all-comprehensive. However, there is much more in this first article.

God Almighty, our Father, is the Father of our Lord Jesus Christ. We must understand the thrust of this article in our Apostles’ Creed and, therefore, also of this Lord’s Day (9) which explains it. Discussing Lord’s Day 9 and the first article of the Apostles’ Creed it would surely be an error to emphasize and dwell at length upon God’s work of creation. Of course, it is well to understand that God is almighty, Creator of heaven and earth, that He, as the Heidelberg Catechism expresses it, of nothing made heaven and earth. However, the emphasis here does not fall upon the Lord’s creation of the world. We may well bear in mind that the theory of evolution is relatively new and was simply unknown when these creeds, the Apostles’ Creed and the Heidelberg Catechism, were composed. What receives the emphasis here is the Fatherhood of God. The emphasis does not fall upon creation here but upon the Creator. Our attention is called to creation because this creation reveals God to us, and it reveals God to us as our almighty Father. And let us understand: that the creation reveals God to us as our almighty Father Who upholds all things and therefore also created all things according to His eternal counsel, is possible only as an object of faith. This is what we say in the first article: “I believe in God, the Father, etc.” This confidence can never be the fruit merely of our natural understanding. We can never prove the divine Creator from creation itself. We can never prove, logically, the Godhead from the things that have been made. These attempts have been made. We need not discuss these theories now. They do have value, to be sure, but only to and for the Christian. How could the natural mind ever reach out to establish the divine Creator? How can the finite prove the Infinite? How can the creature prove the existence of God? The finite can never reach out to the Infinite; the creature must remain within the limits, confines, of the creature.

Besides, we surely, cannot conclude from what we see and experience that God is our almighty Father, Who, according to His eternal counsel, provides us with all things necessary for soul and body and makes whatever evils He sends us in the valley of tears turn out to our advantage. Mind you, He sends us all this misery. So, in the midst of all this misery, all this sorrow and grief and death, God is our almighty Father Who always loves us, always provides us with every good thing, causes all things to work together for our good. He is leading us into everlasting and heavenly glory? But we cannot see this glory. All we see and can see is sorrow, misery, and death. God loves us, would have us live, and causes us to die? This is something we must believe, and faith here is surely the substance of things hoped for and the evidence of things unseen.

We must call attention to the following. In the first place, we read here of the decree. We read: “I will declare the decree.” So the Lord here declares His decree, His eternal counsel and will. It is according to His eternal decree that the Lord hath said unto Me: “Thou art My son; this day have I begotten thee.” However, the eternal Son is God’s eternal Son, not by virtue of this decree, but because of the eternal generation of the Father within the Trinity. We may conclude immediately that this text does not refer exclusively, not even in the first place, to the eternal generation of the Son. Secondly, the text refers in the first place, not to Christ, but to David. This is surely the historical background of this word of God. What we read in the verses l-3 refers, first of all, to David. And what we read in verse 6 surely refers to David. David is he who has been set by God upon God’s holy hill of Zion. Nevertheless, in the third place, the text refers primarily to the Lord Jesus Christ. David is meant in this text only as a type. This is obvious from the psalm itself. How can Psalm 2 refer exclusively or even principally to David? Does verse 8 speak of something that was fulfilled by David? Does David receive the uttermost parts of the earth for his possession? How can the last verse: “Kiss the Son, lest He be angry, and ye perish from the way . . .” be explained as being fulfilled in a mere man? Indeed, David is meant here only as a type. However, this is abundantly clear when you notice the New Testament passages in which the words of this psalm are quoted. There is probably no psalm quoted as often in the New Testament as Psalm 2. Notice what we read in Acts 4:24-28. In these words we have the prayer of the Church upon the release of the apostles by the Sanhedrin. Notice, too, what we read in Acts 13:32-33, in the sermon Paul preached at Antioch in Pisidia on his first missionary journey. And now notice howPsalm 2 is quoted here. First, the reference is very clearly to our Lord Jesus Christ as according to His human nature. Do we not read in Acts 4:27 of “Thy holy child, Jesus”? These words surely refer to our Lord Jesus Christ according to His human nature. And in Acts 13:32-33the words of Psalm 2:7 are quoted as fulfilled. It was then that God begat Him to be King forever upon and over Zion. The resurrection was the beginning of that exaltation which was finished when Christ was exalted in the right hand of God in glory. And the exaltation of our Lord Jesus Christ was surely accomplished in Christ in His human nature.

So God, God Triune, is indeed the Father of our Lord Jesus Christ. God has begotten Him, raised Him up from the dead, glorified Him at His own right hand. But Jesus suffered and died for all the sins of His own. God is, therefore, His Father and our Father, only for Jesus’ sake. Of that Fatherhood of God, of Christ Jesus, and also of His own, this ninth Lord’s Day speaks. And of this the first article of our Apostles’ Creed also speaks: “I believe in God, the Father, our Father because He is Christ’s Father.” The Lord willing, we will continue with this in our following article. 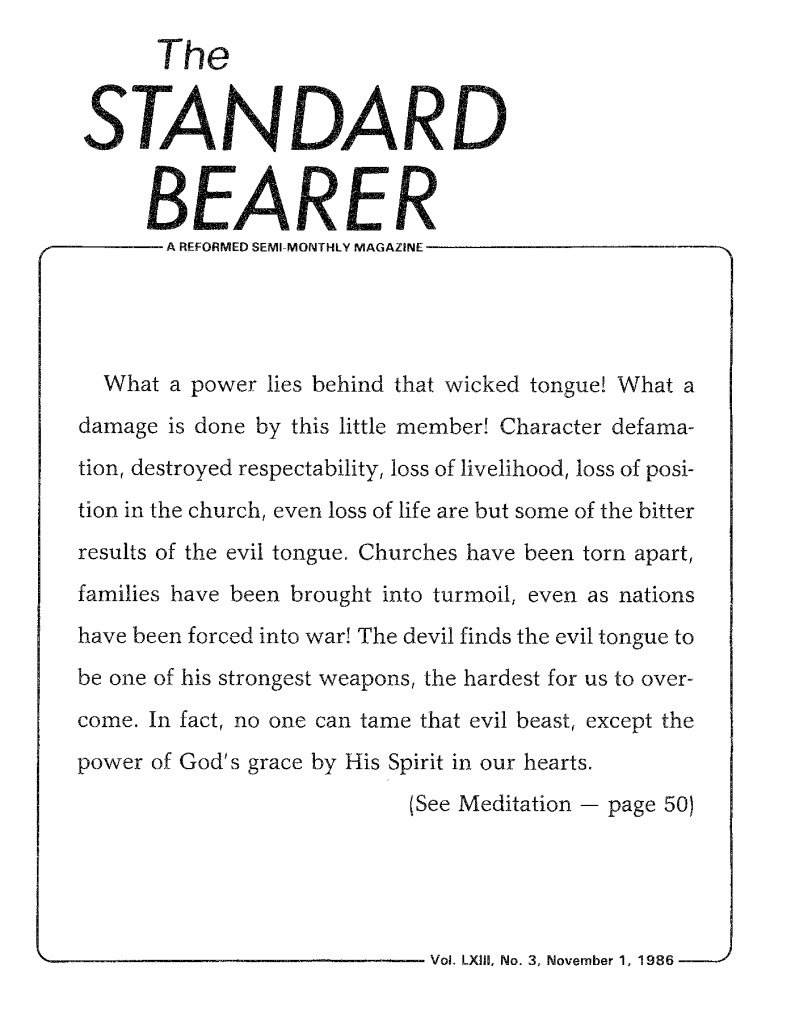