After Esther had been chosen to replace Vashti as the wife of king Ahasuerus—and thus also to become the queen of that vast empire of Persia with its 127 provinces—and even after the king had made a great feast in her honour, the king’s servants still brought a new group of virgins for his sinful gratification. That must be the meaning of the statement in Esther 2:19 that “when the virgins were gathered together the second time, then Mordecai sat in the king’s gate.”

It is claimed by some that this simply means that those who had been rejected by the king were gathered into another building or room to be his concubines. Against this however is the fact that the notice speaks of gathering rather than of moving, and of gathering a second time. But more to the point is the striking and significant change of words here. And we ought to note this.

In Esther 2:2 we read that fair virgins were sought for the king. In Esther 2:13, 14 we read that every maiden went in the evening to be with the king, and that she returned on the morrow into the second house of the women. That was moving to the place where they could serve as concubines to the king. There is no need to repeat this now after the feast in Esther’s honour. But note also that in Esther 2:19 we read of virgins being gathered the second time. Those who went in unto the king before Esther did, and before she was chosen, were not virgins anymore. And it could not be said after Esther’s feast that these maidens were gathered into the house of the women as virgins. Esther 2:19 speaks of a new group of virgins. All through this section fromEsther 2:2-19 the word maidens is used as well as the word virgin. That word maidens is carefully avoided here, and an entirely different word is used, namely, the word that described these maidens before they went in unto the king. Gathered the second time, if it refers to the group in which Esther was included, would also mean that they were no more virgins. The first time that they were gathered they were virgins. And the virgins of verse 19 are a new group that just arrived in Shushan from the corners of the kingdom.

Consider that in the days of Ahasuerus there were no phones or radio broadcasts. There was no such thing as airmail service and no jet aircraft travel. It took time therefore for the king’s men to reach the extremities of the kingdom to scout out and bring back to Shushan what they deemed to be likely candidates for the queenship. We are so accustomed to fast-food services, instant coffee, super highways that speed us through and around cities. We are people that want everything done in no time flat! We hardly know what it means to be thorough, because we are so insistent that it be done quickly. But in that day men took their time. Life was at a far slower pace. And so it happened that a new group of virgins was brought to Shushan after the king had made his choice. There was no way to contact these servants and tell them that there was no need for bringing a new group. A plane crashes on the other side of the globe, and at once we here can be told who they were that died in the crash. With computers, phones, radios and even radar we can keep track of who is where, and even know at any moment their exact location. Ahasuerus could not do that. Nor could he contact them to call them home.

A bit in anticipation, but for further enlightenment, we may also note what is stated in Esther 4:11. There Esther complains to her uncle that the king had not called her to come in unto him for thirty days! That was quite strange for such an immoral king. Was he too busy with military affairs? Or were the fair virgins, who had not come in unto him prior to Esther’s night with the king, still brought in unto him? One truth which the silence of Scripture on this score declares is that this new group was not sent home.

What we do read is that “then Mordecai sat in the king’s gate.” Before this he according to Esther 2:11, “walked every day before the court of the women’s house to know how Esther did, and what should become of her.” Now it was settled. She was the queen. His nervous walking stopped, and he sat in the king’s gate.

There is some question as to the significance of the fact that he sat in the king’s gate. Some claim, on the basis of Esther 3:2, that this means that he had been appointed to some lowly office in the kingdom. This would enable him to be near Esther, and to make contact with her through others in the king’s service. For it brought him on to the very premises of the king’s palace. This may well be the case, although it does seem a bit strange that no statement of his elevation had been given prior to this statement. It is not at all impossible that he sat in the king’s gate, that is, was an official of lowly standing long before this time, that he already was such an official when Esther was taken to prepare for her appearance before the king. Even such work would still allow him to walk nervously before the women’s house. In fact it might even explain that he could do that and not be driven off as one who was “hanging around” and appearing too often near these quarters. One thing we know from subsequent events is that no one in the king’s service knew his relation to Esther.

Sitting in the king’s gate Mordecai is in a place to overhear the plot of the two chamberlains to lay hands on the king. We are not told what filled them with wrath against the king. The word chamberlain is translated that way 13 times in our translation, that is, the King James version. However, it is translated 17 times as eunuch and several times as officer. We find in Esther 2:3that the man who was the keeper of the women is called a chamberlain, namely, Hege. For good reasons the king may have placed all his concubines under the care of eunuchs. And it is quite possible that their wrath was because of the king’s choice of Esther over and above another maiden whom they were favoring. We do read that Esther obtained kindness of Hege, that she pleased him, and that he preferred her above all the other virgins. A thing like that can easily inflame other eunuchs who were favoring another maid. And if the king had seemed inclined to choose their maiden until Esther came along, it could easily explain that they became wroth with the king. After all, the king made the selection.

That Mordecai reported the plot and saw to it that it got to the king’s ears was really doing nothing more than what was his duty to do. Yes, he was a Jew and these men and the king were not. And although Mordecai had no love for Israel’s God, he loved Israel as a nation. He did not command Esther to hide her kindred and people because he was ashamed of being a Jew. As we read in Esther 3:4, he boldly tells some of the officers that he was a Jew. This was volunteered and not forced out of him, when he refused to bow before Haman (Esther 3:4). And for a Jew to save the life of the king of a nation that held his nation captive might seem unusual.

But consider first of all that the life of Ahasuerus, now that he is Esther’s “husband”, was so closely wrapped up with Esther’s that, if he is killed and another gets on the throne, all the things Mordecai had hoped for and worked for would be lost. He had quite an interest in the king now, you may be sure.

But, as I began to say, this was his duty regardless of what advantage it might be to him. Whether it is a believer or an unbeliever whose life is in danger, if you can save that life, you must. Jesus taught us that in His parable of The Merciful Samaritan. And the law God gave at Mt. Sinai made no qualifications; and as interpreted by Jesus it states that we must love our neighbor—not stating or qualifying by saying your believing neighbor only—as ourselves. The Heidelberg Catechism states it correctly when it teaches that God commands us to show all kindness to our neighbor, and prevent his hurt as much as in us lies; and it exhorts us “that we do good even to our enemies.”

With Mordecai it was a case of love of self, rather than of the neighbor. His method of reporting shows this. He did not go to the police or the equivalent of that day. Of course there was the danger that such would fail to attach his name to the warning, and as the source of this important information. Yet going through Esther, who still continued to do all his bidding, it is difficult to see how, after just being told in verse 20 that she still “did the commandment of Mordecai, like as when she was brought up with him,” that when she certified the king thereof in Mordecai’s name, that she was not obeying his command. Of this we read just two verses after that notice of her loyalty to Mordecai’s commands. Following the dictates of sinful human flesh, he was looking for a reward from man, rather than striving to be pleasing in God’s sight.

And yet, as we have seen, it all came to pass out of the counsel of God. Here we ought to see that, although Mordecai had a driving interest in Esther’s good and in the good of the nation of Israel, God has an infinite interest in the church, the bride of His only begotten Son. There are human interests here. But never forget that in every event in history, and behind every turn of events, is that infinite, unchangeable interest of God in His church. No one at that time could see it yet. But He was laying the foundation for the salvation of His church. He is paving the way for the fall of Haman, that enemy of the Jews who would have wiped them all out and off the face of this earth. He is moving men and directing their steps so that there will be a cross and its triumph for the church. For He is insuring the birth of His Son which was to be threatened by Haman’s plot.

Always there are divine and human interests. God cannot forget His people, for He has them engraven in the palms of His hands, the very hands wherewith He upholds and directs every creature. He has them engraven in His hands—as well as in His mind and heart—because with them He works and causes His counsel to be fulfilled. Today as always there are human interests. And that explains the terrible mess the world is in today, and the awful threats of a nuclear war with indescribable devastation. But do not forget that there is that divine interest that works all things together for good to those that love Him. And, as is the case here, He prepares the way for all things to happen, so that His Son will receive His bride and bring her into everlasting glory. Behind and controlling every interest of man is God’s loving interest in His church. 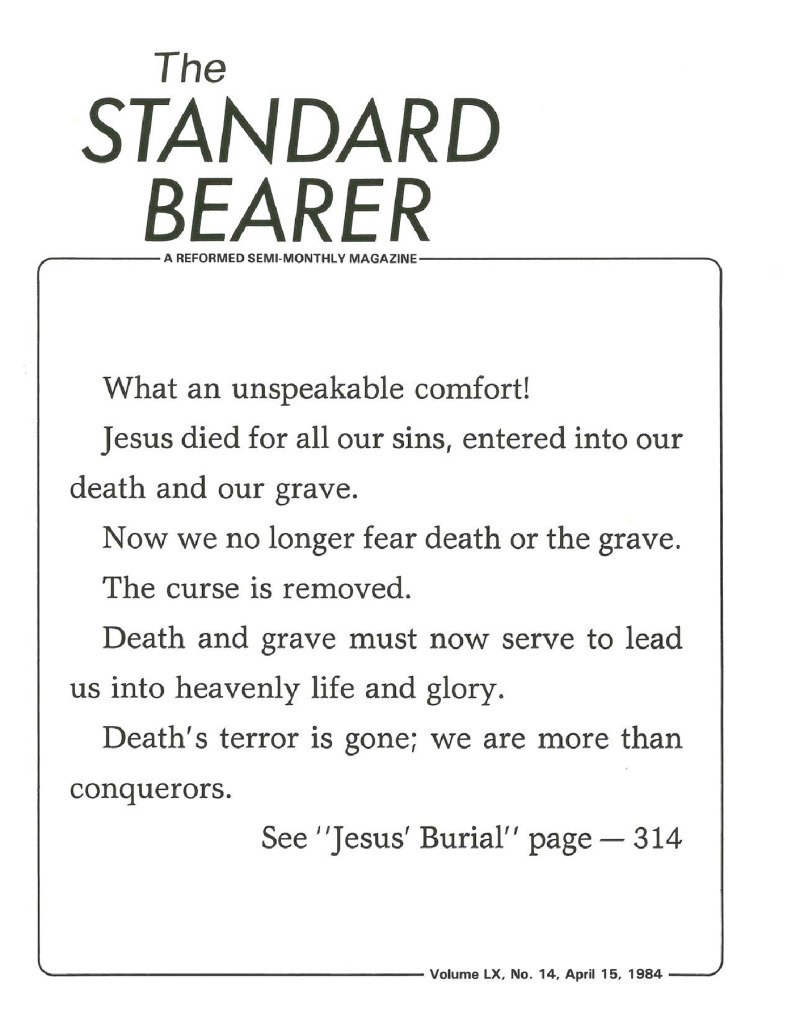