“The Lord’s Supper shall be administered at least every two or three months.”

“The administration of the Lord’s Supper shall take place only there where there is supervision of elders, according to the ecclesiastical order, and in a public gathering of the congregation.”

Article 63 of the Church Order concerns the frequency of the administration of the Lord’s Supper. It establishes a minimum requirement: “… at least every two or three months.”

Nowhere do the Scriptures lay down a rule as to how often the Lord’s Supper is to be administered. In his Institutes, Calvin encourages a frequent celebration.

What we have so far said of the Sacrament abundantly shows that it was not ordained to be received only once a year—and that, too, perfunctorily, as now is the usual custom. Rather, it was ordained to be frequently used among all Christians in order that they might frequently return in memory to Christ’s Passion, by such remembrance to sustain and strengthen their faith, and urge themselves to sing thanksgiving to God and to proclaim his goodness; finally, by it to nourish mutual love, and among themselves give witness to this love, and discern its bond in the unity of Christ’s body (Institutes IV, xvii. 44).

Calvin favored a weekly celebration of the sacrament; however, the authorities in Geneva consented only to a monthly celebration.

Whether or not the sacrament is administered more often than every three months is left to the discretion of each consistory. Most of our churches adhere to the minimum requirement and administer the Lord’s Supper four times a year. A few of our congregations celebrate the Supper every two months, or six times a year.

What must be avoided in administering the sacrament frequently is that it competes with the preaching of the Word as the chief means of grace. This is a real danger in our day, in which there is a heavy emphasis placed on liturgy and ceremony. Invariably the outcome is that the preaching is reduced. Rite and ritual replace the sound exposition of the Scriptures.

In the past it was often the custom to administer the Lord’s Supper on the Christian holidays: Christmas, Easter, and Pentecost. The original Article 63 of the Church Order of Dordt encouraged this.

The Lord’s Supper shall be administered once every two months, as much as possible; and it shall be edifying wherever the circumstances of the churches allow that the same be done on Easter, Pentecost, and Christmas.

Although this practice of the past no longer prevails in our churches, if consistories believe it to be edifying, the Lord’s Supper may surely be administered on these special occasions.

No mention is made in Article 63 of a “thank-offering” in connection with the administration of the Lord’s Supper. Calvin encourages such thank-offerings in his Institutes, IV, xviii. 16. This practice is followed in many of our churches. Usually the thank-offering is for benevolence or for some other worthy kingdom cause.

The original Article 64 of the Church Order of Dordt was quite different from our Article 64. Rather than to be concerned with the supervision of the sacrament by the elders, it concerned the vesper or evening prayer services that were held in many of the churches.

Since the evening prayers are in many places found to be fruitful, each church following this practice shall do what it deems to be most edifying. But whenever there is the desire to eliminate them, this shall not take place without the judgment of classis, together with that of the authority for the Reformed religion.

The vesper services were a carry-over from the Roman Catholic practice of evening Masses. In many of the Dutch Reformed churches a brief prayer service was held in the late afternoon at the close of the work day. At these services a passage of Scripture was read, followed by a brief exposition and prayer.

As early as 1574, decisions were taken by various synods discouraging the practice of vesper services. In churches where they were not in place, they were not to be introduced. Where they were in place, consistories were encouraged to discontinue them, without however unnecessarily disrupting the peace of the congregations. VanDellen and Monsma give three reasons why the synods favored the discontinuance of vesper services.

1. In order that the regular Sunday services might be attended more diligently;

2.In order that family worship might be maintained more diligently;

3.In order that the common prayers held on days of fasting might be used more diligently and zealously (The Church Order Commentary, p. 266).

Supervision by the Elders

Our present Article 64 requires that administration of the Lord’s Supper “… shall take place only there where there is supervision of elders….”

Expressly forbidden by the Church Order are private administrations of the Lord’s Supper, either in homes or institutions. Past Reformed synods, as for example the Synod of Middleburg in 1933, ruled against such a practice. Some churches today have abandoned this provision of the Church Order and under certain circumstances permit private administrations of the sacrament. Our churches continue to adhere to the stipulation of Article 64.

Although Article 64 can be said to presuppose that it is in an established church that the Lord’s Supper is administered, it is not true that such a restriction is absolute. Our churches have made provision for the dispensing of the sacrament on the mission field.

If possible the organization of a congregation shall precede the administration of the sacraments. However, if the conditions are not ripe for the organization of a congregation, such members are to be enrolled in an adjoining congregation, and thus the sacraments can be administered under the supervision of that consistory. However, this shall not be without the accompanying preaching of the Word, nor without sufficient representation of the consistory to have supervision of the administration (Decision appended to Article 39).

This decision is not to be viewed, however, as an exception to Article 64, but as the implementation of the principle of Article 64 in a special circumstance, usually on the mission field. 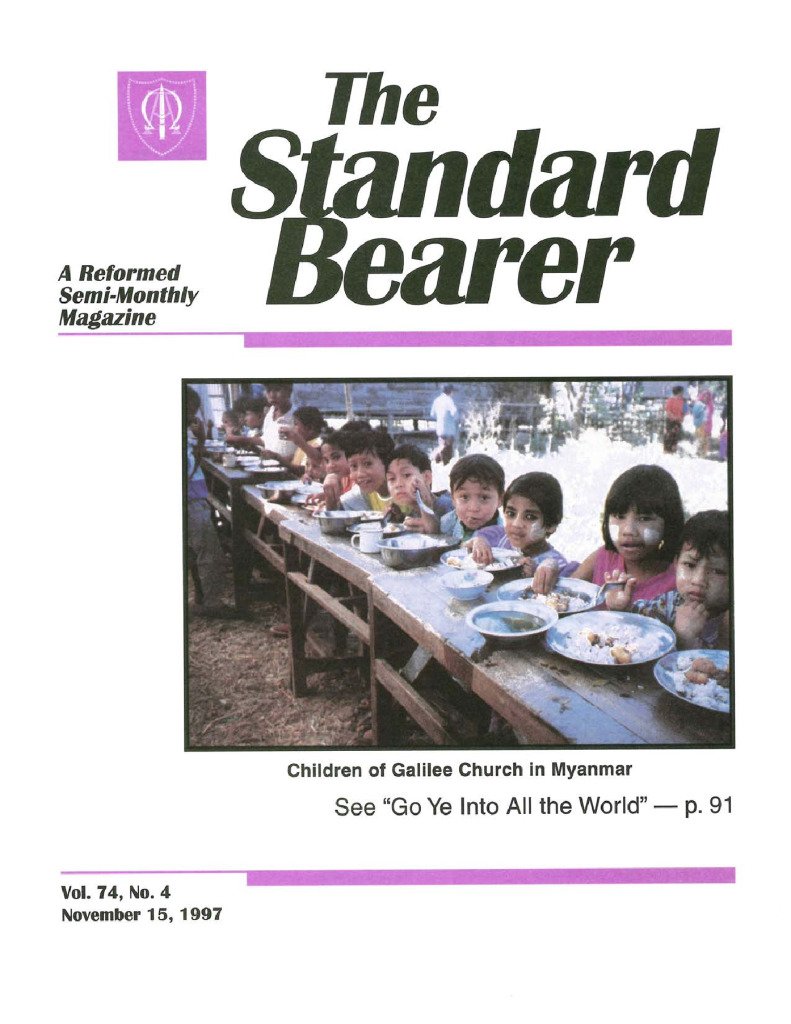