We still must say something about the report of the Theological Commission that was before the General Synod of the Reformed Church in America last year.

And first of all we wish to quote from that report:

“There is a diversity of opinion among the members of the Commission relative to the manner in which the various details of these accounts [in Gen. 1-3, H.H.] are to be understood. In this we believe we reflect a general condition in the Reformed Church, and Protestantism as a whole, but one which should give no cause for alarm. How one interprets e.g. the word ‘day,’ the geography of the garden, the speaking of the serpent, the angel with the flaming sword, does not determine one’s understanding of the essential word which God is speaking to us in these accounts, nor the genuineness of one’s faith. We believe that the Church must allow for a certain latitude in the understanding of details, especially in accounts where symbolic language is evidenced. It is not possible to establish certain canons of interpretation which enable the interpreter to determine infallibly the extent to which the details are to be viewed as literal or symbolical. But we are unanimous in our conviction that the Church insist that the events described are events in history.

“We recognize two inherent dangers in interpreting Scripture. On the one hand there is the danger of imposing an unnatural framework on these narratives and reading them in the light of secular views of history, instead of the framework of faith. On the other hand, there is the danger of severing these narratives from their actuality in history so that they become simply a reflection of every man’s universal experience. Both dangers must be avoided. The Reformed Church, as part of Protestantism, has always had a real concern for the message of the Bible. God must be free to speak His word in His own way.”

And about this I wish to make a few remarks.

First of all, I would say that, if the Theological Commission had never heard of the theory of evolution, it never would have entered their minds that the first three chapters of Genesis must be interpreted, not as a literal record of events, but as a matter of symbolism.

What, for instance, is there in Gen. 1 that is symbolical? In fact, there is nothing in that entire chapter that is not literally meant and that can even be interpreted as symbolism. The Commission speaks of the “framework” of faith. Of this “framework” I have heard before. And whatever the expression may mean (and I confess that I do not understand it) it, evidently, stands opposed to a literal interpretation or, as the Commission expresses it, to “imposing . . . on these narratives and reading them in the light of secular views of history.” This includes the interpretation of the word “day” in Genesis 1. If we would explain the word “day” in the literal sense of the word, we would impose upon it an “unnatural framework” instead of “the framework of faith.” Hence, according to the Commission, it belongs to the framework of faith that we must interpret the word “day” in Genesis 1 as meaning long periods.

But I would say that this is exegetically impossible. First of all, every one of the days of creation is limited by evening and morning. Is there any reason in the text itself to interpret that between these evenings and mornings there were thousands and, perhaps, millions of years of light and again millions of years of night-darkness? Such an interpretation of the word day is, evidently, absurd and impossible. It is not in the “framework of faith,” but in the framework of the theory of evolution that such an interpretation can possibly be given. In other words, this is not an interpretation of the text at all, but stands in flagrant contradiction to the text in Genesis 1. Why not frankly admit that this cannot possibly be the meaning of the text but that, in order to cater to the theory of evolution, we corrupt and contradict the text. This would be, at least honest. Besides, we read in all Scripture that the world was created by the word of God. This is also evident from the first chapter of Genesis. Thus, for instance, in regard to the first day, we read that “God said, Let there be light: and there was light.” Can this possibly mean that God spoke millions of years and that thus gradually light was created or rather came into existence? Again we must admit that this is no interpretation of the text but an imposition of the “framework” of unbelieving science upon the text ofGenesis 1. Again, how about the fourth commandment. We read in Ex. 20:8-11: “Remember the sabbath day, to keep it holy. Six days shalt thou labor, and do all thy work: But the seventh day is the sabbath of the Lord thy God: in it thou shalt do no manner of work, thou, nor thy son, nor thy daughter, thy manservant, nor thy maidservant, nor thy cattle, nor thy stranger that is within thy gates: For in six days God created heaven and earth, the sea, and all that in them is, and rested the seventh day: wherefore the Lord blessed the sabbath day, and hallowed it.” Is not one of the soundest exegetical rules that the same word in the same context must have the same meaning? If this be true then the word day or days of the creation week must be the same as the days of our week.

I could say more about this but I will refrain. I only want to say to the Theological Commission that they cannot possibly impose the framework of natural science upon the first three chapters of Genesis. And in the “framework of faith” they can never make long periods of the days of Genesis 1.

And there certainly is not even a semblance of symbolism in this chapter.

But how about chapters 2 and 3?

The Theological Commission also suggests that in these chapters we have symbolism. We read that “the geography of the garden, the speaking of the serpent, the angel with the flaming sword, does not determine one’s understanding of the essential word which God is speaking to us in these accounts, nor the genuineness of one’s faith. We believe that the Church must allow for a certain latitude in the understanding of details, especially in accounts where symbolic language is evidenced. It is not possible to establish certain canons of interpretation which enable the interpreter to determine infallibly the extent to which the details are to be viewed as literal or symbolical.”

Of course, if we interpret the sixth day, the day in which Adam was created, as representing thousands or even millions of years, it stands to reason that also the events recorded in chapters 2 and 3 must be interpreted in a way different from the literal sense. For in that case Adam was not really created, but developed gradually from some lower animal. Then the account we have in Gen. 2:7 that “the Lord God formed man out of the dust of the ground, and breathed into his nostrils the breath of life: and man became a living soul” also is symbolism and cannot be literally true. The same is true of all the rest of the chapter. Then the account of Paradise, of the tree of life and the tree of the knowledge of good and evil, of the fall of man and of the speaking of the serpent all this cannot be literally true, but must be interpreted as “symbolism.”

Secondly, if we cannot believe the account of Gen. 2, 3as literally true, what is the truth which the “stories” represent? If the “story” of man’s creation as recorded in Gen. 2:7 is not literally true, what is the truth which it represents? The same is the question about Paradise with its two special trees and the speaking of the serpent. Who can interpret this so-called “symbolism”? What does all this symbolism stand for? I am sure that no one can give a satisfactory answer to these questions.

Thirdly, I claim that there is not even a trace of symbolism in these chapters. The whole of the contents of these chapters makes the impression of being a literal account of what was actually there and what actually took place. Perhaps, you object that, certainly, the speaking of the serpent is an exception? I would answer as follows:

1. The devil certainly needed some kind of an instrument to reach man. He could not reach the heart and mind directly, because man stood in the state of righteousness and was without sin. The same was true of our Lord Jesus Christ. In order to tempt Him the devil could not enter into His heart but had to use outward means: the stones in the desert, the pinnacle of the temple, and the high mountain. In the case of the temptation of man, he made use of the serpent.

2. It. is evident that the serpent was an entirely different animal than before he was used in the temptation of Eve. For, in the first place, we read that he was more subtle or wiser than any beast of the field, Gen. 3:1. And, in the second place, we read that, after the temptation, “the Lord God said unto the serpent, Because thou hast done this, thou art cursed above all cattle, and above all the beasts of the field; upon thy belly shalt thou go, and dust shalt thou eat all the days of thy life.”

3. Hence, the serpent surely was the most fit instrument for Satan to tempt the woman. Whatever language the serpent as an instrument of the devil was speaking, it is evident that Eve could understand him. Nor was she surprised that the serpent spoke to her.

We believe, therefore, that even in respect to this speech of the serpent, we cannot possibly find any symbolism here.

We now have come to the end of our discussion of the report of the Theological Commission. But we must still call attention to a final “Note” that was added to this report. It is this:

“One member of the Commission has expressed his conviction that the name ‘Adam’ as a proper name, should be included in the report. Other members also, while recognizing that the term ‘Adam’ is used to represent mankind, nevertheless would be inclined to see this as the proper name of the first man. But some of us, since we are doubtful that it was the concern of the sacred writer to describe in factual detail particular events and to make an identification of particular individuals, would prefer to keep as primary the emphasis on the symbolical nature of the events described and the representative nature of the persons involved in these chapters.”

The language of the Commission is still vague, as might be expected. Personally, I doubt whether they can give a clear account of what they are writing. But one thing seems rather plain and that is that they deny that Adam was a real, historical person.

And by this they deny really all that Scripture teaches, not only about Adam, but also about several other important truths such as, for instance, the doctrine of original sin, original guilt and original corruption. Just read Rom. 5:12 ff.: “Wherefore, as by one man sin entered into the world, and death by sin; and so death passed upon all men, for that all have sinned,” etc., etc.

Surely, the Commission cannot interpret this as symbolical language as they do with respect to the first three chapters of Genesis. The only thing they can say is that Adam was, according to Paul, a historical person and that in this he was mistaken.

And thus we lose the whole of Scripture. 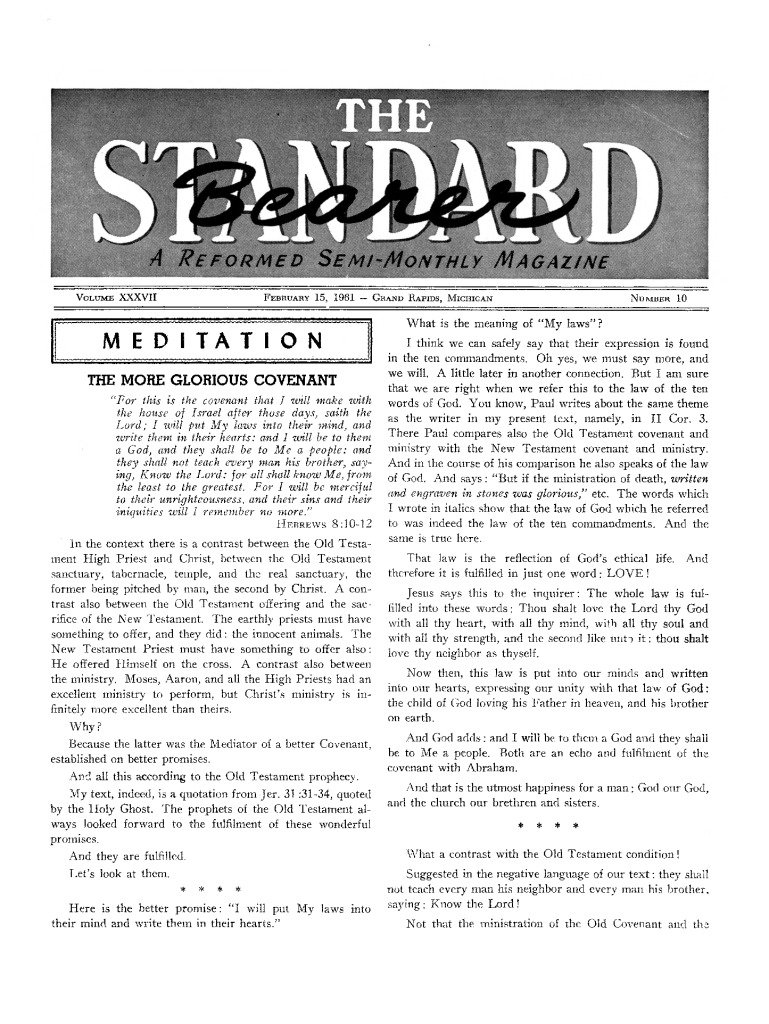