The 75th Anniversary of the PRC: Looking Toward the Future

It is remarkable that a denomi-

nation of churches has remained

faithful to the Word of God, as expressed in the ecumenical and Reformed confessions, for 75 years. It is still more remarkable that this denomination has been faithful over the past 75 years, when the great “falling away” of the end-time has developed more powerfully and widely than ever before.

One unmistakable evidence of the love of the truth in the PRC is the readiness of both the officebearers and the people, in our tolerant age, to condemn false doctrines and wicked ways of life.

The remarkable faithfulness of the PRC to this hour is the amazing work of the God and Father of Jesus Christ preserving His church. God’s preservation of elect members of the universal body of Christ does not take place apart from His preservation of instituted congregations in their denominational union.

Therefore, the 75th anniversary is truly an occasion for celebration: a joyous giving of thanks to God, who has proved Himself faithful to us in the covenant of grace. And when we remember our small and difficult beginning, the fierce struggles along the way, and the great sinfulness of all of us, we sing with the psalmist:

Not unto us, O Lord of heav’n,

But unto Thee be glory giv’n;

In love and truth Thou dost fulfill

The counsels of Thy sov’reign will.

Hope for the Future

In God’s gracious preservation of us hitherto is also reason for us to have good hope for the future.

Celebration by the PRC of their 75th anniversary necessarily includes looking forward. The previous editorial looked back over the history of the PRC. In this editorial, let us together look toward the future.

Our looking toward the future may be the looking of good hope. Churches, like individuals, face the future either with fear or with hope. There is no reason for the PRC to fear. He who is with us is more powerful than the influences of worldliness, mightier than the force of lawlessness, stronger than the pressure of persecution, and more attractive than the allure of false doctrine.

Not apart from our faith in, love for, and obedience to His Word! Where there is distrust of, disinterest in, and disobedience to the Word, there can be no hope, whether by a church or by a member of a church. But in the way of faith, which is itself the constant gift of God, the PRC may have good hope for the future.

Only they need fear the future (and they ought to be afraid!) who secretly are weary of the Word of the truth of the gospel as expressed in the creeds and who hanker after new doctrines, new worship, new ways of life, and new gods.

In a world grown old with weariness, apprehension, and sheer despair, the PRC face the future with calmness, confidence, and expectation. The church of the Lord Jesus Christ is secure in the world! The church has the great business of the King to accomplish in history! The church is looking for the coming of the Omega—the End—of all God’s will and works.

Our Calling in the Future

The second aspect of our looking toward the future must be that the PRC know their calling and are determined to carry it out. God has a purpose with us at the beginning of the twenty-first century. His purpose, and our calling, is the confession of the gospel of the glory and grace of God in Jesus Christ. We are to confess in our preaching and teaching in the congregations, in our instruction of men for the ministry, in missions, in our witness and evangelism, and in our contact with other churches. To this confession belongs our rejection of errors. Those preachers and churches that refuse to say, “We condemn,” always in the name of “love,” thereby show that, in fact, they are unable to say, “We confess.”

Especially are the PRC called to confess sovereign, particular grace—not only in predestination, in the atonement, in regeneration, and in justification but also in the preaching of the gospel and in the covenant with believers and their children.

Particular, sovereign grace is the heart of the gospel.

Particular, sovereign grace is hated and rejected, not only by Rome and liberal Protestantism but also by many of the nominally evangelical and conservative, Presbyterian, and Reformed churches.

In addition, it has by this time become plain in the concrete history of churches that rejection of particular grace at any point is essentially Arminian “free-willism,” which eventually runs out into universalistic modernism.

Therefore, what Mordecai said to Esther at a critical moment in the history of the church of the old covenant can be said to the PRC today: “Who knoweth whether thou art come to the kingdom for such a time as this?” (Esther 4:14)

At this crucial hour in church history, the PRC are called by God to preach, teach, witness, sing, and write the gospel of grace, boldly, loudly, insistently, unambiguously, unashamedly, in season and out of season. To this preaching, teaching, witnessing, singing, and writing, by divine mandate, belong also the exposure and condemnation of every form of the compromise, weakening, hiding, and denial of grace, with the same boldness, loudness, insistence, forthrightness, and zeal.

Suffering in the Future

In closest connection with our confession of the gospel of salvation by grace alone, it will also be the calling of the PRC and their members in coming years to suffer for the sake of Christ. This has been the experience of the PRC in the past: cast out, ignored, scorned, misrepresented, slandered. The slander and murder of them today take the form of the charge, usually whispered behind their back, “hyper-Calvinists.” This is the prophecy of Scripture regarding the true church in the last days: “ye shall have tribulation” (Rev. 2:10).

This is inevitable in light of developments in the world at the turn of the century and millennium. In a world in which man is increasingly deified under the forms of various idols, so that man’s lusts are made law, all those who worship only the one, triune, true God revealed in Holy Scripture and who “live godly” must suffer persecution (Dan. 3:18; II Tim. 3:12).

The Threat of Apostasy in the Future

As we look toward the future, the PRC ought not to overlook the dangers that threaten. The confidence of a good hope is not the same as presumption. It is one thing for a denomination of true churches, loving and confessing the truth, to trust in a faithful God to keep them from the winds of doctrine that now blow with gale-force. It is quite another to assume that the pervasive, deceitful, mysterious power of apostasy will not threaten the PRC.

Such an assumption would be arrogant and foolish.The graveyard of churches is filled with evangelical, conservative, Presbyterian, and Reformed congregations and denominations that once lived by the presence of Jesus Christ in His Word and Spirit.

Does not Jesus Himself warn the Church of Ephesus that He may “remove thy candlestick out of his place”? (Rev. 2:5)

Do not we ourselves see denominations that once were among the purest of churches falling away, both in Europe and here in North America? They doubt and criticize Holy Scripture; they deny biblical creation; they espouse or tolerate universalism; marriage is a joke among them; they are approving of homosexuality; their churches are empty on the Lord’s Day.

Has there not already been departure of a large segment of the Protestant Reformed denomination?

Why then should we suppose that this could never happen to us?

Herman Hoeksema did not entertain such an assumption, nor did he permit his seminarians to entertain it. I well remember his parting charge to me on the last day of my classes with him, now many years ago: “You will soon be a minister in the Protestant Reformed Churches. Preach the Word. Do not preach my dogmatics. Preach the Word of God (holding a Bible in his shaking hand). And if the day comes that the Protestant Reformed Churches put you out for the sake of the truth, preach the Word.”

Which are the dangers that threaten us?

Everyone may call our attention to present weaknesses and future perils, as God gives him or her wisdom to see them. This is part of our life together in the unity of the faith. This is the responsibility of each in the office of believer.

These are real and mortal perils, in my judgment:

that we lose our first love for the truth of the gospel, that is, our love for God as made known in the gospel;

that a fascination with perishing earthly possessions and fleeting earthly pleasures kills our godliness—our piety;

that we yield to the pressure of an ecumenical age, if not to compromise and surrender the doctrine of particular, sovereign grace in the preaching and in the covenant, then to view it merely as a kind of optional “PR distinctive,” in which case also the Churches will give it up;

that we succumb to the allurements and pressures of our depraved Western culture, so that we surrender the antithesis of life of the saints, as regards marriage and the family, first of all, but then also as regards entertainment, education, and labor;

and that we react to the danger of the loss of doctrine and commandment with a legalistic, harsh radicalism that binds upon all the commandments of men.

To the PRC, as to each member, comes the sharp admonition of I Corinthians 10:12: “Let him that thinketh he standeth take heed lest he fall.”

If we foolishly or cravenly hold our peace at this critical hour in the history of the church, or otherwise render ourselves incapable of confessing, “then shall enlargement and deliverance arise … from another place” (Esther 4:14). There must be a church that witnesses to the Godhead and glory of God right up to the time, shortly before the return of Jesus Christ, when the beast out of hell kills the two witnesses (Rev. 11).

God grant, in covenant mercy, that the PRC, among others in all the world, may continue to be these witnesses. 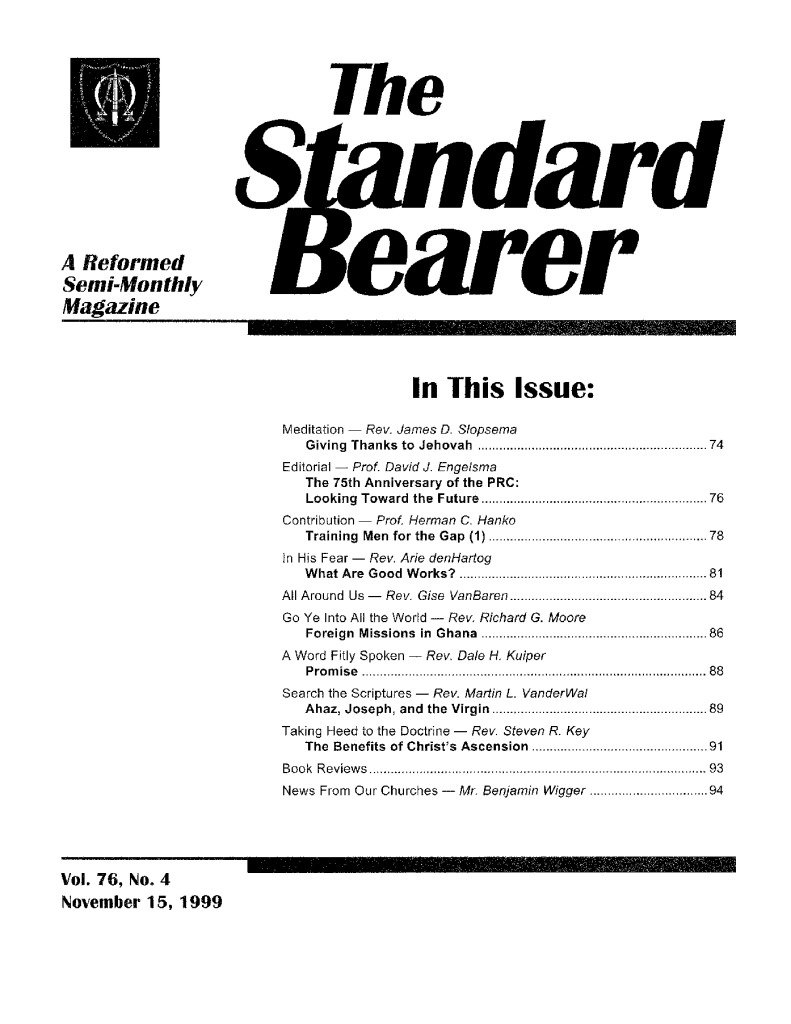