The 75th Anniversary Celebration of the PRC

The 75th Anniversary Celebration of the PRC

Mrs. Lubbers is a wife and mother in the Protestant Reformed Church of South Holland, Illinois.

Having been blessed by attending both the previous anniversary celebrations of the PR Churches, in 1950 and 1975, my husband and I anticipated the commemoration of its 75-year existence with a week-long celebration in tandem with the 61st anniversary of the PRYPC. The threefold cord of love, loyalty, and nostalgia for our churches provided a nearly irresistible tug towards the greater Grand Rapids environs during the week of June 19-23.

Many families made an effort to attend. Some traveled long distances. Some camped their way across the U.S. with small children to join the celebration. For the 2,000 plus people in attendance who availed themselves of all or parts of the celebration, the week was as satisfying as fresh-baked bread. Charter members (see Our Goodly Heritage Preserved for a list of these stalwarts), large and not so large families, grandparents, singles, teenagers, and many beautiful children immersed themselves in the events available to them.

Adults took advantage of the sectionals each day ranging in interest from an anecdotal church history to musical concerts to mission overviews. Several history buffs toured the old First Church on the corner of Fuller and Franklin Streets. High in the bell tower, Rev. VanOverloop uncovered a banner, caked with decades of dust and grime, from the 1960 PRYPC. I have it on good authority that the frayed old rope tolled the bell (dated 1926) long and loud for this little band of adventurers. Others on the self-guided tour were intrigued with the pulpit and the old consistory-room furniture still in place from the days of H.H.

For the young people separated on the northern end of the campus enjoying their own convention-type events, days were saturated with many and varied activities such as swimming at lake Michigan, open-skating and broom ball on two international-sized rinks, and the ever-interesting meeting of new people.

School-aged children had little occasion for boredom. Mornings were structured around Bible school, where children learned through explanation, singing, and crafts, about the Armor of God. Afternoons were filled with kickball and soccer while younger children and toddlers enjoyed story time and singing with Autoharp accompaniment, simple games, and art activities. The grand finale family Fun Day featured a vertical rock climb, pony rides, and a giant slide. Each afternoon the pool at Calvin College was open for swimming. There were those who observed that one could not see the water for the children.

Many of the children, too young to be left unattended, were taken by their parents to the adult sectionals. It was not an uncommon sight to see grandparents (how young many of them looked!) helping their children wrestle strollers up and down steps and staircases. In one sectional which I attended, there was a little boy maybe 2 or 3 years old who colored for over an hour on his knees by a metal chair while his parents handed the baby back and forth to each other. Nobody wanted to miss anything!

The 75th Anniversary Celebration of the Protestant Reformed Churches was a delightful combination of all that’s best of an old-fashioned church picnic and a sophisticated dinner party. It made use of the oldest of games—just a stout rope and a tugging contest between East and West (the West won the Tug-o’War)—and the very latest in technology—instant communication by pager and cell phone. The uplifting and informative sectionals were transmitted in the oldest way possible—a man (or woman) behind a podium talking—and with an amplified computer screen illustrating the latest techniques in using the Internet. And just as in the old days, the parents and grandparents carried the infants, took the toddlers by the hand, and brought the many, many children to the daytime sectionals and the evening speeches.

The gently sloping lawns and elegant buildings of Calvin College provided the gracious backdrop for these festivities. We thank you, Calvin College, for the unhindered use of your lovely campus. We trust that the make-your-own ice cream machine in the cafeteria is still working; it put out a great deal more than its quota of cones that week, most by unskilled hands.

When I inquired of certainpeople what stood out in their memories about the anniversary celebration, they replied: “The accessibility of all the ministers.” “The excellent food which I didn’t have to prepare for a whole week. Even waiting in long lines for the meals provided opportunity to meet and talk with new people.” “If you didn’t object to getting up early in the morning, the 7:00 devotions were inspirational.” “The singing of Psalter numbers by over 2,000 people.” “Our theme song, Psalter number 27, will always hold a special place in my heart.” “The open patios in front of the dorms and the adjoining foyers between them where one could talk in intimate settings or larger groups with fellow saints from around the world into the wee hours of the morning.” Nor can one leave out those friendly drivers of the golf carts; they were everywhere, always warmly offering a ride to the elderly, handicapped, or just plain weary celebrators. All concurred that the evening meetings at Sunshine Community Church were sterling. Powerful messages by the four speakers and full-throated singing of the psalms by the celebrants combined to make these evenings soul satisfying. To see almost 400 young people take their places each evening in the front rows of this mega church, and to witness almost 500 children mount the platform on that final night to sing the same songs that have been sung in our churches for almost 100 years was in itself thrilling!

A simple “thanks” to the committee who planned and implemented such a fine celebration hardly seems adequate. Perhaps you will content yourselves with knowing that to a large extent you are to be credited for the many happy faces, the warm expressions of care for one another, and the wonderful time which each and every attendee enjoyed. Certainly you, too, delighted in noticing the easy camaraderie of people from all backgrounds, all parts of the country, and all ages, but all one in the Reformed faith. As Mr. Herm Ophoff stated as an aside in his emotion-packed sectional: “It makes no difference which PR church you visit, you will hear the same doctrines preached. It doesn’t matter whom you talk to here, we are all one in the same faith.” You gave of your time and yourself to provide such unity. That was a good thing.

One of the lasting benefits of the 75th celebration will be the two books which it produced. Prof. Hanko’s For Thy Truth’s Sake is a volume of substance, integral to every Reformed home. A Goodly Heritage Preserved is an attractive soft-covered book, easy to read, filled with interesting facts and figures on each church, school, and PR institution.

For me, the unforgettable memory of the celebration was the many children. The strollers (although, secretly, I’m thankful I no longer had to push one), the little children with their scrubbed faces and brand new sandals purchased for this special occasion made a lasting impression on me. Why? Because all those children, carried, pushed in strollers, or in any other way commandeered by their parents, signal bright hope for the future of the PR Churches. If the doctrine especially defined by the PR Churches is the doctrine of the covenant, as Rev. Hoeksema wrote that it was in his editorial, “Protestant Reformed,” March, 1950 Standard Bearer, then we saw with our own eyes that doctrine in all its tangible proof.

Necessarily, the 75th Anniversary Celebration came to a close. It was 11:00 p.m. before the cars and busloads of people arrived back at campus on Thursday evening. The little ones were being tucked into bed on that last night while several adults began to gather outside the Timmer-Heyns dorm. Not wanting such a beautiful night to end, they began, all unrehearsed, to sing a Psalter number. Hearing that Psalter number, a few more people began to join the little group. Listening to the full, harmonious singing outside their windows, more and more men and women were lured to the spontaneous sing-along. Some, already in bed, quickly dressed and joined the swelling throng. A few had Psalters. Most did not. They sang from memory and from the heart. For a long, long time the hauntingly beautiful melodies of David were sung by a large circle of devotees to the traditional songs of the PR Churches. In the moonlight, under the stars, on the lawn of Calvin College, these songs drifted up to the children in their beds. And so, 75 years later, my grandchildren fell asleep to the same songs that stirred our worthy forefathers in 1925.

It was a very good day.

It was a grand celebration. 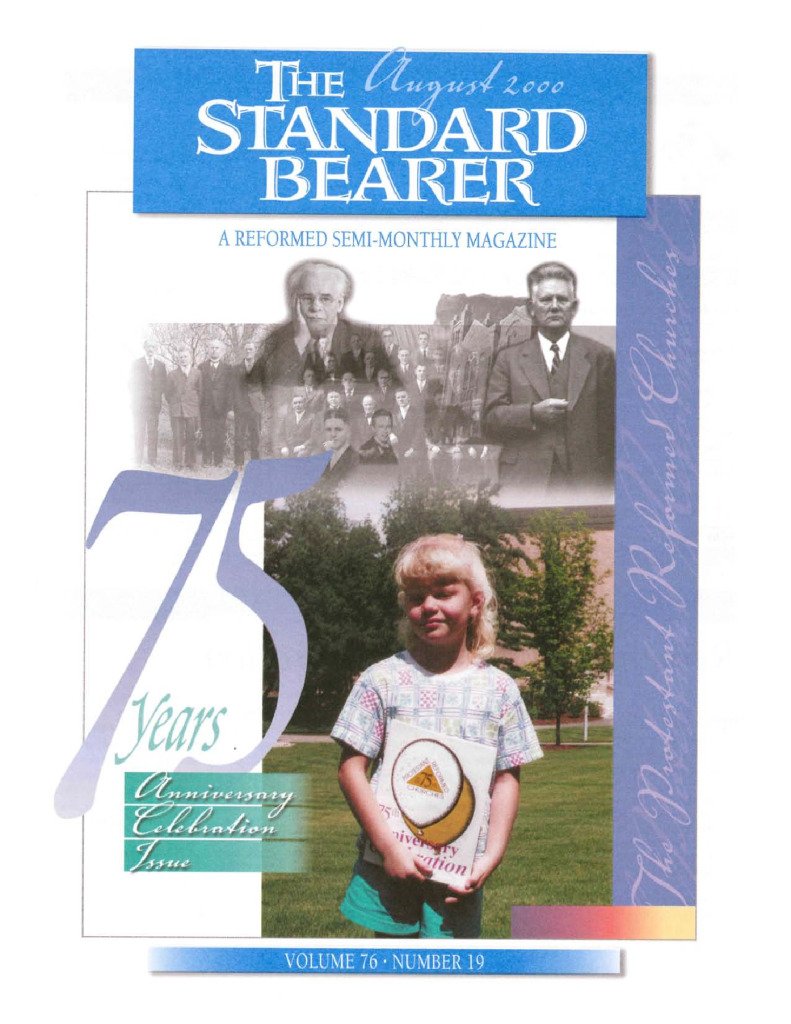