That Parenthesis in the Third Question

That Parenthesis in the Third Question

When infants are presented for baptism by the church, three questions are asked of those presenting these infants. According to the Form for the Administration of Baptism that we use (p. 86 in the back of the Psalter), the third question reads, “Whether you promise and intend to see these children, when come to the years of discretion (whereof you are either parent or witness), instructed and brought up in the aforesaid doctrine, or help or cause them to be instructed therein, to the utmost of your power? Answer. Yes.”

The words within the parentheses, “whereof you are either parent or witness,” raise several questions. What is the historical reason for the inclusion of these words? To what person or group of persons does the word “witness” refer? Ought these words in parentheses be read at each baptism ceremony, even when it is clear to all that those presenting the infant are the parents? If this is the case, what is the reason for the parenthetical marks?

There are those who believe that the word “witness” refers to the entire congregation which witnesses the baptism and benefits from it. There are pastors who, during a baptism sermon, refer to the word “witness” to remind the congregation that we all have a responsibility to instruct all the children of the congregation in the aforesaid doctrines. Are these ideas correct? We offer these lines in an attempt to put that third question in the proper historical perspective.

It ought to be stated at the outset that no one can deny that every member of the congregation has a calling in respect to all the children of the congregation and not only his own. In fact, this calling extends to the children of believers in other congregations. This belongs to the wonderful communion of saints! As Answer 55 of the Catechism instructs us, “That every one must know it to be his duty, readily and cheerfully to employ his gifts, for the advantage and salvation of other members.” If a family cannot provide the natural needs of their children, we give that family those needs, either directly or through the diaconate. If someone is not using our schools to instruct their children according to the demands of the covenant, we point them to their calling in this regard, and assist with the paying of tuition if this is necessary. We love our brothers and sisters in the Lord, and we love their children, and we will do what is in our power that things go well with them!

But is it the intent of the baptism form to set forth this truth?

The form was composed by Petrus Dathenus in 1566, shortly after the Reformation. The situation in the churches was one of upheaval, change, and disorganization. VanDellen and Monsma write of these times in the Church Order Commentary, page 231:

The general principle having been established (that of infant baptism, DHK) a number of practical questions soon presented themselves. From the very outset if became the rule to baptize only the children of parents who belonged to the Reformed Churches. But some parents, who were in sympathy with the Reformation and at heart at odds with the Roman Church, nevertheless failed to make a final break with Rome because they lacked the courage of faith and clarity of conviction. Officially they were still Roman Catholics. Sometimes such parents requested a Reformed Church to baptize their child. The first Synod (Emden, 1571) replied to a question regarding such cases by referring to the opinion of the theologians of Geneva, ministers, and professors. The rule should be, so Beza had written, that only children of Church members should receive baptism. But in abnormal times, as when the Church was in process of being reorganized, or when severe persecutions were raging, exceptions to the rule might be made. Children of weak and fearful parents might be baptized under these circumstances, though not without certain stipulations and promises. But as will be realized, that ruling was by way of concession for the period of transition.

Those “stipulations and promises” were that church members in good standing had to function as witnesses, guardians, or sponsors. And they had to be in a position to make good on the baptism promises.

VanDellen and Monsma bring up another example on the same page of their Commentary. Can children of parents under discipline be baptized? After pointing out that those whose Christianity is in question are in no position to make baptism promises before God, they write,

Yet this Sacrament is too sacred to be reduced to an empty form. Consequently the Church and its office-bearers demand that the parents shall be qualified to explain to the child, as it grows up, the meaning of its Baptism, and that these parents shall also promise to do so. Now if for any reason parents of a child entitled to Baptism are disqualified to take upon themselves these solemn promises, then, if the child is to be baptized, witnesses must be found who promise to take the place of the parents to the best of their ability. If such sponsors cannot be secured the child should not be baptized until he is old enough to judge for himself, and to request Baptism upon profession of faith.

The well-known commentators on the Church Order give further advice:

Children born to excommunicated parents are not entitled to Baptism…. Inasmuch as we have no definite assurance in God’s Word regarding children of such unfaithful and unbelieving parents, and inasmuch as the instruction of such children by competent sponsors would be much hampered at best, it is better not to baptize children born to excommunicated parents.

make their permanent homes, say with their God-fearing grandparents who shall be able to explain the meaning of Baptism to them and who shall be in position to give them a good Christian training, then such children need not be barred from Baptism; the parties concerned being willing to serve as sponsors, taking upon them the baptismal vows.

Hence, it is clear from these examples that, historically, the term “witness” in our third question does not refer to the congregation as a whole, but to definite individuals who have agreed to be witnesses, guardians, or sponsors for the child in question. Therefore, it is not normally necessary that these words be read.

The Christian Reformed Church, in their Psalter Hymnal (1976, Board of Publications of the C.R.C.), has three baptism forms available for their use. The first one is the same form as ours, except that the parenthetical phrase is omitted. The second is a modernized version of our traditional form. And the third contains a question to be answered by members of the congregation, after the parents have given their answers. This question is as follows:

The minister addresses the congregation:

Do you, the people of the Lord, promise to receive this child in love, pray for him, help care for his instruction in the faith, and encourage him in the fellowship of believers?

The congregation responds: We do, God helping us.

If anyone desires that the congregation respond at baptism to a question regarding their responsibility, that person ought to present an overture to consistory, classis, and synod in order that the necessary changes be made in our form in the proper way. We do not believe such a change is necessary. Until such a time we should use the form we have according to its original intent and meaning. Then we “observe in all things the adopted order” (Art. 44 of the Church Order). 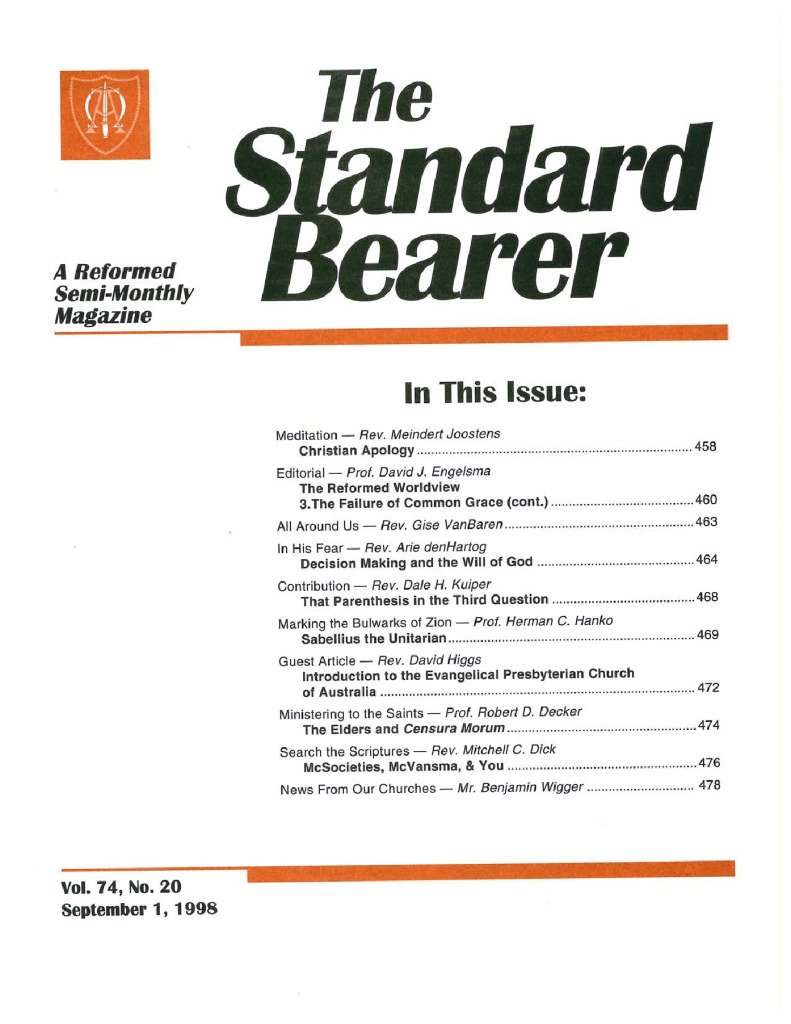