Tertullian and the Gnostic Heresy

Tertullian and the Gnostic Heresy

Rev. Terpstra is pastor or the Protestant Reformed Church of Pella, Iowa.

“Howbeit when he, the Spirit of truth, is come, he will guide you into all truth . . . .” Nothing better proves the veracity of this promise of Christ recorded in John 16:13than the history of the labors of the Christian church in clarifying, setting forth, and developing the truth of Scripture. If we are the least bit acquainted with the development of the truth of God’s Word throughout the ages, then we have some idea how often this promise has been specifically fulfilled.

In leading the church into the truth, the Spirit used and still does use men. This is clear from the lives of the disciples to whom the promise of John 16:13 was first made. The subsequent history of the church has also made this clear. In every age of the church there have been men who stand out on the pages of history, because the Spirit raised up these men and so guided them that they developed the true faith once delivered to the saints. These men we call the “church fathers,” and it is well for us, the church of our Lord in the twentieth century, to know these men and the truths they developed. In this rubric we hope to lift some of these men off the pages of history and set them before our mind’s eye, in order that we might become familiar with a few of the more important “fathers.”

In considering these fathers of the church, it is equally important that we understand that the Spirit of truth has used heresy to guide the church into the truth. Every age of the church has equally shown the fulfillment of the Word of God in II Peter 2:1, 2, namely, “. . . There shall be false teachers among you, who privily shall bring in damnable heresies . . . . And many shall follow their pernicious ways; by reason of whom the way of truth shall be evil spoken of.”

But the sovereign Spirit has used these heretics with their false doctrines to stir up and strengthen the church to develop the faith. Through their battles with apostasy and error the Spirit made the church fathers “defenders of the faith” and “valiant for the truth.” By means of departures from the faith the Spirit made these men sharpen the two-edged sword of the Word, so that with the one edge they cut away the Lie and with the other edge they cut into the Word to make the truth more clear and concise. Development of the truth always comes in the way of the defense of the truth against error.

In this rubric, besides becoming familiar with some of the church fathers, we will also be introduced to a sampling of the heresies the church has had to confront in her history. And so it is our purpose in this series of articles to be re-introduced to the cardinal truths of our Christian and distinctively Reformed faith.

For our first topic we want to consider our first “defender (and developer) of the faith,” the church father Tertullian, and the heresy which he was called to battle, Gnosticism. This will take us back in time to the second century A.D. For Gnosticism, though it was a heresy that arose already in the first century, really developed and became the potent force of evil that it was in the 2nd century. And Tertullian, whom the Spirit raised up to fight this deadly error, dates from the late 2nd century to the early 3rd century (c. 160/70 to c. 215/20).

Gnosticism was a strange and deadly deviation from the truth of Scripture. With regard to the character of this heresy, it may be remarked in the first place that Gnosticism was a mixture or synthesis of elements taken from many different sources. For their ideas the Gnostic teachers drew from Judaism, from the Greek philosophical systems of Platonism and Stoicism, and from the Eastern, mystic cults of Persia and India. These ideas they attempted to combine with the Christian faith. L. Berkhof comments on this in hisHistory of Christian Doctrines: “It may be said that Gnosticism mistakenly sought to elevate Christianity to its rightful position, that of universal religion, by adapting it to the needs of all, and by interpreting it in harmony with the wisdom of the world” (p. 46). Gnosticism was, as Berkhof writes, quoting another source, “a stealing of some Christian rags to cover heathen nakedness” (p. 47).

In the second place, with regard to its character, Gnosticism claimed to be a religion for the spiritual elite, for the intellectuals and sophisticated. Reacting against the simplicity and straightforwardness of the Christian faith, Gnosticism was designed to satisfy the philosophical, speculative bent of the Greek and Eastern mind. For those who loved to delve into and dabble with the deeply mysterious matters of religion and philosophy, Gnosticism sought to provide satisfaction. This is why it drew so much from pagan and philosophical sources.

It is in fact from this trait that Gnosticism derives its name. In contract with the simple faith of the “ordinary believer,” which they termed mere pistis (the Greek word for faith), the Gnostics claimed there was a higher, secret knowledge for the most spiritual class of Christians, which they termed gnosis, after the Greek word for knowledge. It is by means of this higher knowledge that the true Gnostic claims the richest experience of salvation. For this reason Gnosticism has been termed “the Pelagianism of the intellect” (cf. G.P. Fisher, History of Christian Doctrine, p. 53).

If this description of Gnosticism has a familiar ring to it, it is not merely coincidental. Heresy is never new; it is simply old lies in new garb. Thus the Pentecostalism, cults, and liberal theology of our present day bear these same traits.

What were the teachings of Gnosticism and at what points were they heretical? In answering this, we can only summarize in brief. Fisher, in his abovementioned work, points out that Gnostic thought was directed to two main points: the absolute Being (God) and the origin of evil (p. 53). It was at these two fundamental points that Gnosticism went astray; and because they went wrong at these two points, they deviated from many other cardinal truths.

First of all, the Gnostics were heretical in their conception of God. The “absolute Being,” as they called God, was to them the “Father Unknown.” He is so transcendent that He is not only unfathomable but also unknowable. From this error they went on to deny the biblical doctrine of God as Creator (modern day theistic evolutionists are not new in their heresy). According to them this supreme, all good God did not create the world. Rather is the universe the product of a subordinate, inferior being, whom they called the “Demiurge” (after the Greek word for artisan). This “Demiurge” is the God revealed in Genesis 1 and throughout the Old Testament, whom they considered to be weak, limited, hateful, and vengeful, and not the God who sends Christ.

The Gnostics arrived at this because of their peculiar view that there was a whole series of middle beings emanating from the “absolute God’ to the material world, which beings they termed “aeons” (like so many rungs on a ladder). The farther down the “ladder” these beings were, the less good and more evil they became. To them the Demiurge was a being far down on this “ladder.”

Secondly, and closely related to their heresy concerning the doctrine of God, the Gnostics fell into error with regard to the origin of evil. Rejecting the biblical doctrine of the Fall, they held that evil has its source in the Demiurge, the Creator. Because the Demiurge was such a low and therefore evil being, the world he made is evil. Consequently, the Gnostics fell into dualism. For them, what is spiritual is good, but what is material is evil. This they applied also to man. Because his body is material, it is evil; but because his soul is spiritual, it is good.

This dualism was bound to affect their conception of salvation and the work of Christ in saving man. Accordingly, Gnosticism taught that man’s misery lies in the fact that his good soul is imprisoned in his evil body and thus alienated from the good God. Salvation consists in the soul being set free from the prison of the body and the material world in order to ascend into the pure realm of the spiritual. For this purpose of rescuing men’s souls the supreme God sent Christ.

However, to the Gnostics Christ was not the only begotten Son of God but another of those subordinate beings (“aeons”). He was simply an emissary of the spirit world, sent by the good God to rescue man. Moreover, though the Gnostics spoke of Christ’s coming into the world and suffering and dying as the man Jesus, they denied that He could have assumed a real human body, since the body, being material, is evil. Thus did they fall into the error of “Docetism,” that Christ has merely the appearance of a human body.

We can see from this that the Gnostics were not only heretical in denying the Person and deity of Christ, but also in denying His Incarnation. It ought to be clear that this early heresy attacked the most basic of Christian doctrines. It was a real, dangerous threat, therefore, to the church and the truth delivered to her by the Spirit of Christ.

But for the battle against this heresy the Spirit of truth raised up the man of God, Tertullian; and he battled long and hard during his lifetime against it. To this man and his work we will turn in our next article. 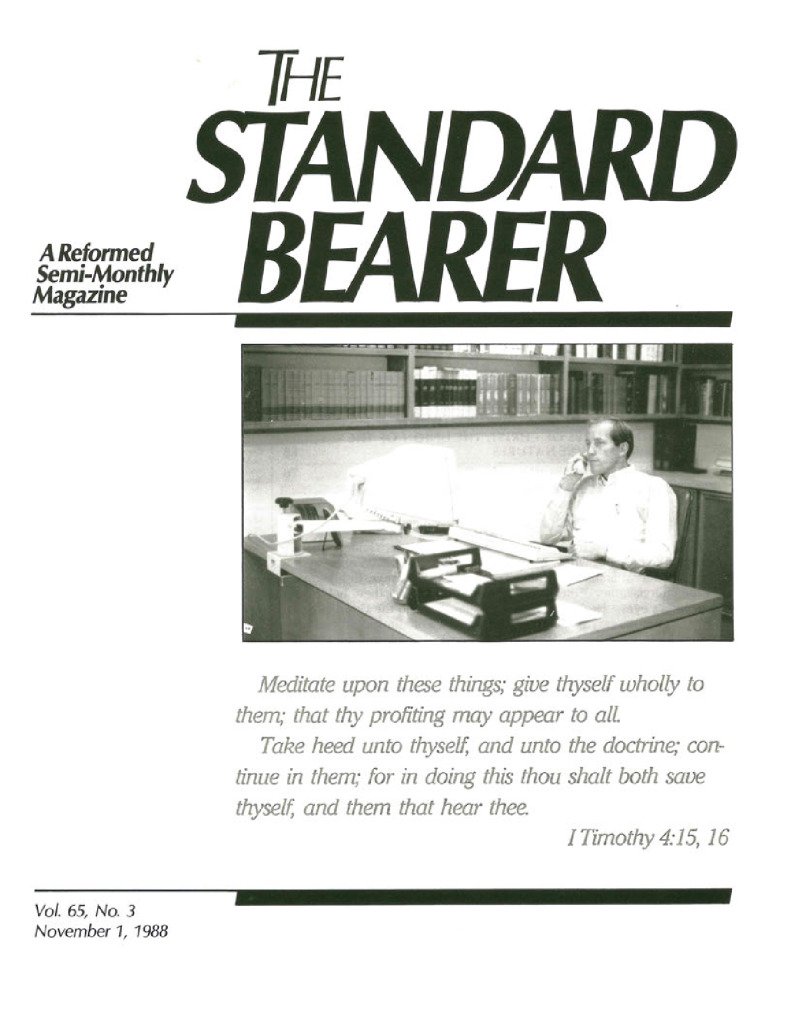