Note to the Readers: Some time ago I had plans to write a series of editorials on the need for Protestant Reformed teacher training. With that in mind I wrote this editorial, intending to follow it up with a number of articles on this subject. In the unfolding of the editorial schedule, that was not possible…until now. We reprint this editorial from June 1, 2014 with modifications, to start this series up once again.—Prof. Russell Dykstra

One of the most significant covenant blessings given to the Protestant Reformed Churches is God’s gift of Christian schools. God establishes His covenant not merely with believers, but also with their chosen seed. Believing parents are committed—by their own baptism vows—to instructing their children in such a way that their children will know, love, and obey Jehovah their God. God commands parents to instruct their children constantly— from the rising up out of sleep to the time they tuck their children into bed at night. In this way, their children will know God, know His creation, and be equipped to serve Him in the country and culture in which they live.

Wise parents understand the daunting nature of instructing their children in all the various disciplines that are necessary for Christians to live and work before God in this age. They are also deeply conscious of the uncompromising demand of God, and of the vows they have taken. Hence, they seek to fulfill part of their responsibility through the instruction of a good Christian school. Beginning some eighty years ago,1 and to the present day, God has granted conscientious Protestant Reformed parents this crucial assistance from their own schools. We cannot be thankful enough for this precious gift.

In their prayers of thanksgiving, parents, elders, ministers, and the whole congregation include the gift of good teachers. The Christian school is the teachers, and the teachers are the Christian school. They stand in the parents’ place. They rear the children in those school hours. They impart necessary knowledge of God, His creation, and how to serve God as His covenant people in the world.

Because of the vital task teachers perform, and because teachers are partially fulfilling the demand God places squarely upon parents, the standards for teachers in Protestant Reformed schools are, and ought to be, high. The Christian school teacher must possess the God-given ability to teach—effectively and interestingly to convey the beautiful knowledge of God and His works in Jesus Christ. To teach in a Protestant Reformed school he or she must be Protestant Reformed, that is, not merely a member, but one who grasps, loves, and is wholeheartedly committed to the truths God has given to the PRC. The teacher must also be compassionate and have a love for the children placed under his or her care. Teachers must be able to admonish and discipline biblically and effectively. They must be equipped and prepared to rear these children in the fear of the Lord. Teachers are the Christian school.

Is that it? Yes, that is all. They may receive their diploma from a college that is Christian Reformed, Reformed, Baptist, Lutheran, or Methodist, or a state institution.

Why are we parents satisfied with that kind and that limited amount of training? These teachers stand in our place—rearing our covenant children. And the only thing we require of them is that they be members of the Protestant Reformed Churches and have a college degree with state certification?

School boards interview prospective teachers and look for the best qualified to take their place on the staff. They can search for indications of spiritual strength and commitment to the work of covenant instruction. But, is this twenty-two year old girl an effective teacher? Effective not according to the standards of Grand Valley State, or Kings College, or Hope College, but according to our standards? And is this twenty-two year young applicant an effective Protestant Reformed teacher?

Do not misunderstand. I am not attacking our teachers. I am not even criticizing them. Teachers reading this editorial need not feel threatened by anything written in it. I love the teachers in the Protestant Reformed schools. I have personally seen their ability, their zeal, their commitment, and their love both for the truth and for the children. I have witnessed these things sitting in a desk as a student for thirteen years, as a teacher working with other teachers, and as a parent of nine. Do these teachers all have the same teaching capabilities? Of course not—neither do ministers. But it is not with the teachers that I have an ax to grind. My criticism concerns their training. My question is this: Why are we as parents not doing more to help our teachers be the very best teachers—Protestant Reformed teachers—they can be? Why, after eighty years of maintaining Protestant Reformed schools, do we not have an institution to train young men and women for teaching in a Protestant Reformed school? It is puzzling, even disturbing, and it needs to be faced.

It may interest you to know that the Protestant Reformed Churches have faced this matter in the past, and that officially as churches. During the years 1948-50, strong consideration was given to requests that the churches work together to establish an institution for training Protestant Reformed teachers. We will discuss that history in subsequent articles. If you are interested, you can consult the Acts of Synod for those years.

Early on, the seminary of the Protestant Reformed Churches revealed its eagerness to assist in the significant effort to train teachers. Both Herman Hoeksema and George M. Ophoff were willing to make speeches and even craft a course for teachers. This interest in a quality, Reformed training for teachers was seen in Rev. Hoeksema in his earlier years in the ministry, dating back to his time in the Christian Reformed Church.

This comes out in an editorial entitled “The Normal School” that the young HH wrote in The Young Calvinist in April of 1920. We quote here the first third of that editorial in order to present his viewpoint on training teachers. It also explains the concept of a “normal school.”

Hence, it is our conviction, that free schools2 ought to be the rule, and that the State, naturally interested in the education of its citizens, ought to have power to supervise and to establish schools where the parents neglect to do so. Free schools the rule. State education the exception.

But the question of the Christian school as such I was not going to discuss. I will proceed from the assumption that most of our readers agree with us on this question. If this is a fact, however, if we believe in the Christian primary education, it stands to reason that we must also believe in Christian normal schools. And it is this cause which I wish to bring to the attention of our societies and of our young men individually.

What is a normal school? It is an institution for the purpose of training young men and young women for the teaching profession. It is with a view to the teaching profession what a seminary is for the ministry. Now, we all agree that we must not expect competent ministers in our church without a good seminary. But just as little right we have to expect competent teachers in our Christian schools without a good normal school. We must have teachers that are theoretically well-informed, that are practically well trained and that are principally on a sound basis. Our entire Christian school depends upon such teachers. The teacher is the heart of the school. If we want to have Christian schools, we must have Christian teachers in the first place. And to get Christian teachers we must simply train them.

Rev. Herman Hoeksema instilled in his son and successor in the seminary the same zeal for Christian schools, and for training Protestant Reformed teachers. In the early 1950s H. C. Hoeksema penned a lengthy series on Christian schools, and there he focused also on the need to train teachers. He held the conviction that the Protestant Reformed people had to establish a training institution— either a college or a normal school. He writes:

What would such an institution have in its courses that would be distinct from another teacher training institution? HCH gives a fairly thorough list,4 including “educational subjects, such as the principles of education, the philosophy of education, and the psychology of education (or, at least, general psychology).” In addition, courses that would acquaint the teachers with the “principles of history, of geography, of arithmetic, of music, of language, etc.” Especially high on his list was a thorough program of practice teaching, with constructive criticism an essential part.

For the present, however, we may have to be satisfied with a normal course in the limited sense of the word. Possibly we could begin with a few of the general college subjects, possibly not. It may be that for a time our prospective teachers would have to seek that part of their education elsewhere, as they do now, even though principally it would throw a monkey wrench in the machinery of their education.

But I am convinced that the time is not distant when we must and shall establish the beginning of our own teacher training school. It will probably be a humble beginning. Let it be. But let it be healthy, principally sound, and as complete as possible. And let us beware that we be not satisfied with half finished, amateurish efforts.

That was the sentiment expressed some sixty years ago. This is my conviction as well. The purpose of this editorial is not to discuss all the options and difficulties, of which there are many. That will come, D.V. The purpose now is simply to consider the disturbing lack of training for our teachers. And to start us thinking about solutions.

1 The members of the PR congregation in Redlands, CA organized the first Protestant Reformed school in 1934. The next school organized by the parents in the PRC was in the late 1940s, and more came into existence in the fifties and sixties. 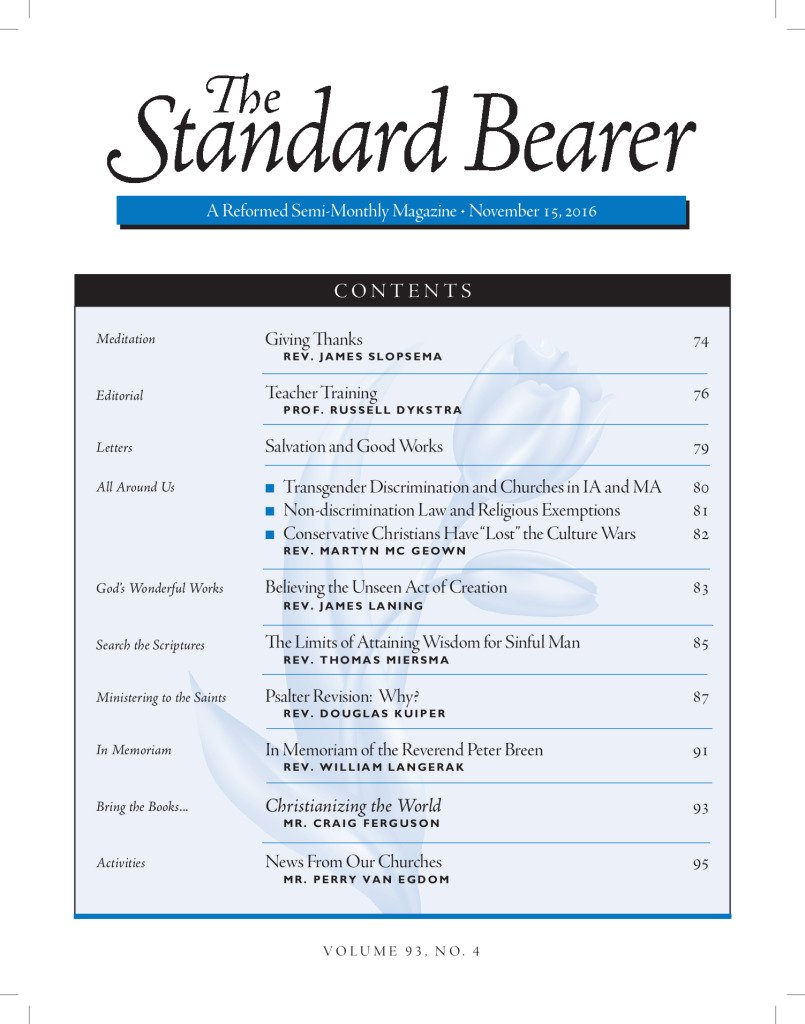