After a week of very busy meetings, Synod of 1976 has become history. As is our custom, we present a brief review of some of Synod’s activities and decisions. This report is not official, and it is not exhaustive. Hopefully, the Acts of the Synod of 1976 will be published promptly this year; and the complete account of Synod’s decisions may be found there.

This year’s synod met at South Holland, Illinois; and there were several days during Synod’s sessions on which the air-conditioned facilities of the South Holland church furnished welcome relief from the heat (and smog!) of the Chicago area. The pre-synodical prayer service on the evening of June 1 was led by the Rev. J. Kortering, president of last year’s synod. The text of his sermon was Psalm 125:1, 2: “They that trust in the Lord shall be as mount Zion, which cannot be removed, but abideth for ever. As the mountains are round about Jerusalem, so the Lord is round about his people from henceforth even for ever.” The sermon was warm and inspiring, and it certainly furnished the appropriate encouragement to the delegates. For this reporter listening to Rev. Kortering preach was a rather novel experience: it was the first time I had heard Rev. Kortering preach since his practice preaching efforts in his senior year in seminary in the 1959-’60 school term.

On Thursday morning, June 3, Synod began its deliberations by giving attention to matters regarding our Theological School. One of the main items receiving attention in this connection was the rapid growth of our student body and the consequent increasing work of the faculty. Consideration was given to the eventual need of another professor. But Synod was not of a mind to make any hasty changes. Instead, provision was made for some temporary assistance in the school (to be arranged by the faculty and the Theological School Committee); and the Theological School Committee was instructed to make a study of the long-range needs of our school. Prof. Decker, whose first term as professor ended this year, was re-appointed to a 4-year term; we are happy to report that later during Synod’s sessions he informed us of his acceptance of this appointment.

The second item assigned to Committee I was the report of the Committee for Contact With Other Churches. Most of this report dealt with- matters which arose in connection with last year’s Australasian Tour and with the fruitful contacts made at that time. This was something new for a synod of our churches: for this was really the first time in our history that our churches were confronted by anything positive in the way of relationships with other churches. Synod, therefore, gave long and careful attention to these matters, and was not minded to act hastily. In fact, Synod still had to complete action on one important item, that of the request for help from New Zealand, during its final session. Two items deserve special mention here: 1) Synod authorized the Committee for Contact to continue discussions with the Evangelical Presbyterian Church of Australia with a view to establishing a sister-church relationship. 2) Synod heeded the call for help from the Orthodox Presbyterian Church of Christchurch, New Zealand, and authorized the loan of one of our ministers as pastor of that congregation. This was a major decision; and although Synod first hesitated somewhat, after long and careful discussion and a few changes in the original proposal of the Committee for Contact, a decision was taken by overwhelming vote. The Committee for Contact was instructed to inform the congregation of Christchurch immediately; and steps have already been taken to implement the decision. Our Committee has submitted a nomination to the Session of Christchurch OPC consisting of Revs. B. Woudenberg, A. den Hartog, J. Slopsema, and M. Hoeksema. The congregation in Christchurch will now extend a call to one of these brethren, according to the plan. And it is our sincere hope and prayer that the Lord will incline the heart of one of these men to answer the call for help from “down under.”

Committee II served Synod with advice on matters pertaining to missions. Synod had before it a long and detailed report concerning the work in Jamaica. There were many details of this work to be considered. The country is closed to a permanent missionary at present, so that there could be no consideration of the possibility of sending a man to Jamaica on a permanent basis. The work there, however, will be continued, help will be given especially to the four young ministers trained through our labors, and emissaries will again be sent to oversee and evaluate the work there. With regard to Rev. Harbach’s labors in Houston, it was decided to continue the work in that field with a view to the possibility of new contacts there; the situation in Houston is not yet ripe for the organization of a church. And the Hudsonville Consistory, along with the Mission Committee, were instructed to have Rev. Kuiper labor to follow up various contacts in the Michigan area for the time being. If nothing develops, Rev. Kuiper will be declared eligible for a call from one of our congregations. Both of our missionaries, by the way, were present at Synod and addressed the Synod concerning their labors. Let us remember the cause of our mission labors and the laborers before the throne of grace.

A final item of importance on which Committee II advised Synod was an overture and an accompanying Study Committee report which dealt with the place of the local church in mission labors and with the relationship between the local church and the Mission Committee. The advisory committee served Synod with very careful and detailed advice on this matter—advice which, for the most part, was adopted. It is not possible to report the details of these decisions here. In general, we may say that the whole process of overture and study has resulted in some adjustments with respect to the relationship between the churches and the Mission Committee and a renewed emphasis upon the calling of the local churches in the work of missions. Unless, however, the churches pay attention to these decisions and unless our mission calling receives proper emphasis in the pulpit, all the decisions in the world will have no effect. Let us remember this!

Committee III advised on many items which are usually classified as rather routine, as well as on some interim reports concerning the unfinished work of catechism book revision. The major item on this committee’s docket was that of the Study Report concerning Baptism on the Mission Field. The Study Committee presented a lengthy and careful report which recommended that our missionaries, under certain limitations, should administer baptism on the mission field even where no congregation has been organized or is on the point of organization. Since this is an important change from past practice, and since the Study Report had been in the hands of delegates and consistories for only three weeks or less, Synod decided to refer this Study Report to the churches for study, with a view to reaching a decision at the next Synod. It is incumbent, therefore, upon the churches to study this report carefully; and if individuals or consistories wish to reflect on this report, they should do so by overture to the next Synod. This brings to mind a weakness in our system which ought to be corrected. The purpose of our Agenda, according to our rules for synod, is to provide the churches with the opportunity to reflect (by way of overture) on matters coming before Synod. However, the Agenda does not appear until about the 10th of May; and there are no classical meetings between that time and the time when Synod meets. Nor has any procedure been outlined by which a consistory may reach Synod with an opinion or an objection concerning matters in the Agenda. Unless correction of this weakness is made, I predict that some day our churches are going to face problems in this regard. This ought to be discussed, and a solution of this flaw in our system should be presented.

Committee IV advised Synod chiefly on matters of finance, such as subsidy for needy churches, budgets of standing committees, etc. It is a fact that there will be a considerable increase in the synodical budget for the next fiscal year, and a consequent increase in assessments. Part of this increase is due to a large increase in subsidies for needy churches; part of it is due to the need of building up our denominational Emeritus Fund with a view to future retirement of our older ministers; part was, of course, due to our decision to help God’s people in New Zealand. Synod, it may be said, was constantly mindful of the budget, acted very carefully, and certainly was by no means a spendthrift synod. Committee IV is actually a kind of watchdog committee in regard to finances, and serves Synod and the churches well in this regard. But the simple fact is that the Lord has laid this work, and its attendant expenses, upon us. The work of God’s kingdom as represented in the cause of our churches must go forward; and our churches should consider it a privilege as well as a responsibility to support this work. Meanwhile, it would be well—and it certainly would be helpful—if one or two of our larger congregations would agree to sponsor and underwrite the costs of some of these labors. In the past, for example, one of our churches supported one of our missionaries by itself. Why not consider this possibility, either with regard to our mission endeavors or with regard to the loaning of a minister to New Zealand?

For the rest, you will have to consult the Acts of Synod-1976 for details. You ask when will the Acts appear? Well, I failed to mention that Rev. M. Schipper reported to Synod that he was unable to carry out the duties of Stated Clerk which he accepted last year. Synod accepted his resignation; and it elected a young, vigorous, efficient man in his place: Rev. M. Joostens. We look forward to the prompt publication of this year’s Acts, as well as to the belated publication of the 1975 Acts.

May the Lord our God follow the various decisions taken with His indispensable blessing, and may the cause of His church as represented in our churches continue to prosper and go forward!

Postscript: I neglected to mention that Hudsonville, Michigan, was appointed the calling church for the 1977 Synod. 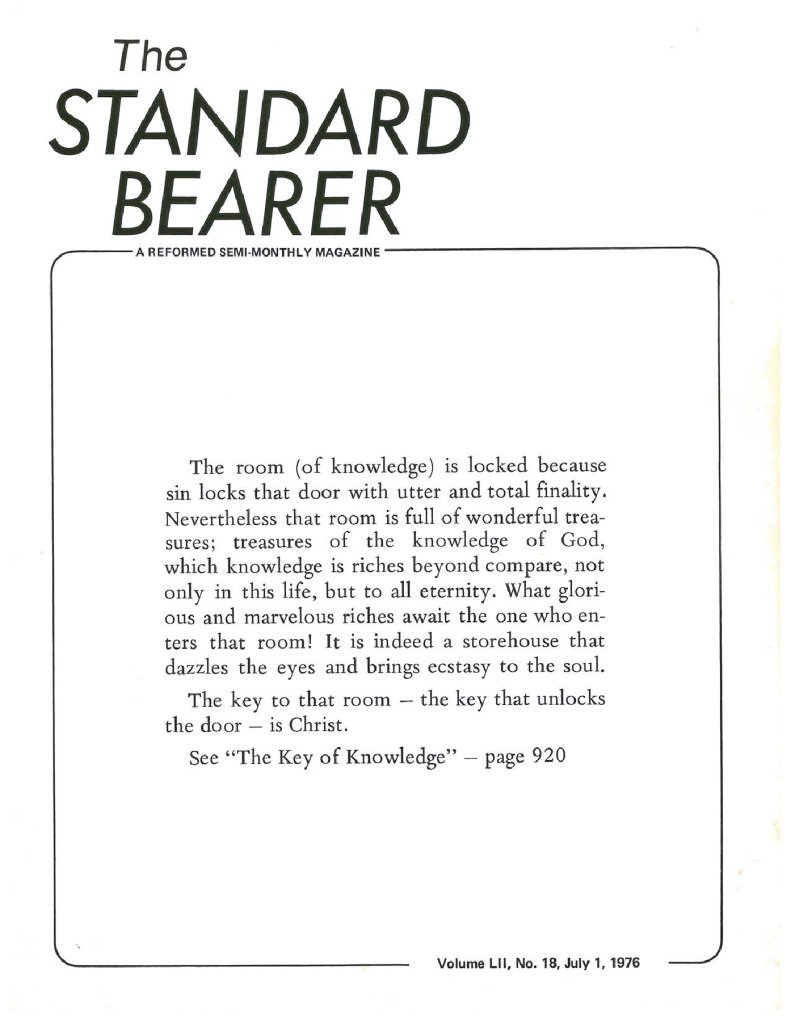