Since taking on the role of contributor to the “All Around Us” rubric for the Standard Bearer, I have regularly taken notice of articles in the media on the subject of the government’s surveillance of its citizenry. It is on this topic that I write, and for reasons that will be laid out at the end of the article, this is a subject well worth our reflection upon as Christians.

I begin with developments in China. China is by far the world leader in the surveillance of its citizens. Eight of the ten most surveilled cities in the world are in Chi­na, a calculation based upon the number of cameras per residents in the city (the two other top cities being Lon­don and Atlanta, Georgia).1 As reported in a late 2018 article in The Atlantic, the Chinese national police force in 2015 called for a “omnipresent, completely connect­ed, always on and fully controllable” system of national surveillance.2 That call in 2015 is becoming a present reality, enabling the Chinese government soon to roll out a nation-wide Social Credit System, a program that has been piloted in several major cities throughout Chi­na in the past few years. The purpose of complete sur­veillance in China is not only the safety and protection of its citizenry, but chiefly the absolute control of every citizen so as to ensure complete devotion to the Com­munist Party of the Chinese government.

China is developing a new high-tech system of mass surveillance and coercion aimed at suppressing political dissent among its 1.4 billion people, while forcing American and Western businesses to conform to the government’s communist policies if they want to operate there.

The system that critics call an Orwellian national- level control system has been dubbed the Social Credit System (SCS) and was set for launch in the coming year, although recent reports from China now say the rollout could be delayed until 2021.

The massive system has been tested in several major Chinese cities and uses millions of surveillance cameras linked to supercomputers containing massive databases. Face and voice recognition technology then identifies and monitors people with the goal of controlling behaviors that range from dissident political activity to jaywalking, ostensibly as part of a financial credit monitoring system similar to those used in the West.

Vice President Mike Pence called out the program in a recent speech, warning that China’s surveillance state is “growing more expansive and intrusive—often with the help of U.S. technology.”

“By 2020, China’s rulers aim to implement an Orwellian system premised on controlling virtually every facet of human life—the so-called social credit score,” Mr. Pence said. “In the words of that program’s official blueprint, it will ‘allow the trustworthy to roam everywhere under heaven, while making it hard for the discredited to take a single step.’”3

The basic idea of the Social Credit System is simple: the government rates all behavior, rewarding what it prescribes as good and punishing what it determines is bad. A good social credit score comes with privileges: favorable treatment in securing jobs or discounted tui­tion, for example. A lower social credit score results in hardships: citizens are required to pay fines, are barred from buying airline tickets, or are banned from traveling by high speed train. What was hypothetically described in George Orwell’s 1984, today because of the devel­opments of technology—facial recognition cameras, 5g connectivity, super computers allowing complete interconnectivity—is materializing in China: Big Brother sees, knows, and controls all.

Albert Mohler in his daily podcast The Briefing called attention to a further development of the Chinese government’s surveillance of its citizenry from an article in the Financial Times: emotion recognition. That is correct: The Chinese government is in the beginning stages of employing cameras and technology that not only have the ability to recognize identity but also, sup­posedly, to identify emotions. Technology experts in China claim that emotion recognition, already being used in airports and subways, gives the ability to scan crowds and analyze mental states to prevent crime be­fore it may take place. While initially being employed in the service of safety and crime prevention, it is not difficult to see how such technology would be used in the future. Mohler’s analysis is on point:

But Christians need to gain a little distance here and understand that when you have the totalitarian government of China using what is defined as emotion recognition software and analyzing people with this kind of software application, then how long is it before they decide, ‘Okay, here’s a pious person. We can identify that person now. Here’s an individual we can detect, perhaps even in the middle of the crowd, who is demonstrating an emotion that does not serve the interest of the Chinese Communist Party.’4

Most readers of the Standard Bearer do not live under a communist regime like the Chinese govern­ment, and therefore may be tempted to think that the above-described circumstances in China do not apply to our current context. And for the most part, that is correct. Surveillance by the government for the pur­pose of a social credit system is not on the near horizon for citizens in the U.S. However, the infrastructure for complete surveillance is more and more being put in place in the U.S. A December 6, 2019 Wall Street Jour­nal article reported that by the end of 2021 there would be more than 1 billion surveillance cameras in use the world over, 85 million of which in the U.S.5 Already now, while China is out front with one camera per 4.1 citizens, the U.S. is right behind with one camera for every 4.6 citizens (the U.K. is at one camera per 6.5 cit­izens; Singapore at one camera per 7.1 citizens).6 Most of these cameras are in use for safety in a commercial and school setting. However, what is taking place in Atlanta, Georgia could become a trend throughout the country, namely, that companies and citizens give the government access to private cameras to prevent and fight crime, which is why Atlanta ranks as one of the top ten most surveilled cities in the world.7 The point is that the infrastructure is present in the U.S. for com­plete surveillance, if the government were ever to de­mand such access to the cameras from its citizens.

There are several reasons this is a noteworthy subject to reflect on as Christians. In the first place, it clearly reveals how the way is being paved for the coming of the anti-Christian kingdom and the oppression of the church of Jesus Christ. It is striking how the language that is used to describe the surveillance of the Chinese people is language that should be reserved for God alone. The above quotations spoke of an “omnipres­ent” surveillance network and of technology that is able to recognize “emotions.” God alone is truly omnipres­ent and God alone knows the heart. But man seeks to dethrone God and enthrone himself, the most supreme example to come being Antichrist himself. And he most likely will use these technologies to unite kingdoms un­der his rule and exercise complete control over men, all with an eye on the destruction of the church. The present-day reality in China demonstrates how easily the oppression can be inflicted upon Christians when a government has the ability to know and see all that one does in public through surveillance cameras and in private through the surveillance of Internet, email, and social media activity. Any association with Jesus Christ may lead to the loss of rights, the inability to buy and sell, fines and imprisonment, and even death. But know­ing this, we do not go forth in fear or dismay, but in the hope of the final victory when Jesus returns.

In the second place and closely related, let this be a reminder for us of the importance to remember in prayer God’s people the world over as they presently experi­ence persecution. The purpose of this article was not to explain the current Christian persecution in China under her Communist Party. We know that such is the case today for followers of Jesus Christ in China. How­ever, the fact is that the above-described surveillance to ensure complete devotion to the government will only serve the end of the further persecution of God’s people in China, whose absolute allegiance is never to a man or government party, but to the Lord Jesus Christ. May God continue to uphold His persecuted church with the confidence that though she is the church persecuted to­day, one day she will be the church triumphant in glory.

In the third place, the subject of surveillance must lead us to reflect upon the truth that there is only One who truly sees and knows all. It is impossible, even with the most sophisticated technology, for any government to see all and know all. And certainly it is impossible ever to think that technology can identify the emotions of the mind and heart. But there is One who can and does: Jehovah God, whose eyes “are in every place, be­holding the evil and the good” (Prov. 15:3). Reflection upon privacy, security, and surveillance should cause us to remember that we stand before an all-seeing and all-knowing God. He sees and knows what we do in public on the streets and in private in our homes. Noth­ing escapes Him. And in His righteousness He will ex­ecute exacting judgment upon all.

As we reflect upon our lives in this highly surveilled world, may it not be the camera above the traffic lights or the hard drives that can be accessed and searched that determines our behavior, but the fact that we are to walk before the face of God, motivated by thanks for the victory and hope that we have in Jesus Christ alone. 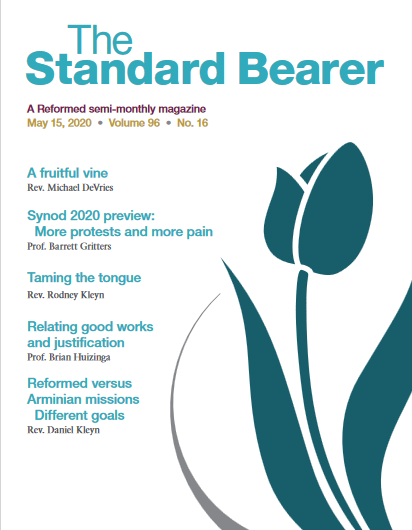